The storming of the US Capitol on 6 January prompted a spate of statements, essays, and other reflections, particularly by US college presidents. What is the purpose of education, and what is the role of colleges in imparting higher ideals such as civic awareness and a respect for minority rights? US-based academic Wu Guo analyses the situation. 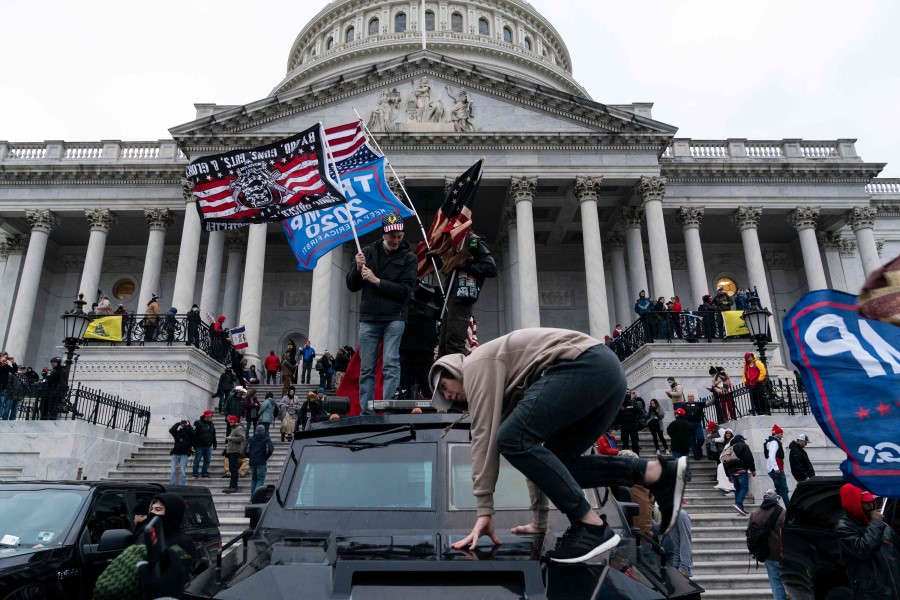 In this file photo taken on 6 January 2021 Supporters of US President Donald Trump protest outside the US Capitol in Washington, DC. (Alex Edelman/AFP)

Candice Chan - 17 January 2022
China-Russia rivalry in the Central Asian region is intensifying, with the US's departure from Afghanistan and the two countries seeking to fill the power vacuum by working within their Central Asian spheres of dominance. Can the two powers work together to foster greater regional stability or will they let their competitiveness get the better of them?
Read more
Translated by Candice Chan on 1 March 2021

The storming of the US Capitol that shocked the world on 6 January 2021 has sparked multi-faceted reflections among America’s higher-education institutions, which are worth attention.

A commentary by Patricia McGuire — president of Trinity Washington University — in the Chronicle of Higher Education said that following the incident, some college presidents were quick to issue statements, questioning problems with higher education, which “must own some responsibility for the moral failures that established the conditions that led to the January 6 insurrection”.

The meaning of higher education

She felt that higher education “should be the great counterweight to government, the reliable steward of truth and knowledge against the corrupting tendency of politics to manipulate facts”, and yet in recent years, “few college presidents dared to challenge this tsunami of official lies”. This silence has allowed one lie to spread: that the “white majority is diminishing as Black and brown Americans grow in numbers and political power”.

She said that the “pervasive fear in one part of American society” as a result of this lie was the root cause of the insurrection, and “racial animus and embrace of white supremacy [gave] so much energy to the mob”. She asked: “If we presidents shrink from telling the truth out of a fear of alienating people whose favour we crave, what are we teaching our students?”

...colleges are driven by money and have lost their sense of purpose and public responsibility, and no longer advocate values or truly serve the common public good.

McGuire then takes the commentary to another level: that higher education today is guided more by interests and less by exemplary values, leading to a “vacuum of advocacy for the academy’s true purpose”. US society pushes students to “look at the list of majors ranked by earnings, to choose to study only those fields with a lucrative payoff”, so that colleges are driven by money and have lost their sense of purpose and public responsibility, and no longer advocate values or truly serve the common public good. She highlighted that college presidents have to be “more ardent and relentless advocates for racial justice”, because the purpose of colleges is to “educate the leaders who have the power to move the crowd to good purposes”.

Michael S. Roth, president of Wesleyan University, said in an interview that a college represents the search for knowledge, and this search presupposes a common determination of facts. He also tweeted: “As we begin to restore order, let’s use education for the civic preparedness we desperately need.”

In a general email to staff and students at the college where I am, the college president said the school “condemns the violence and stands united with members of Congress and their staff who loyally serve this country”, and reiterated its “commitment to the ideals and actualisation of social justice”. The president declared: “Higher education is an essential component of our democracy. For more than two centuries, Allegheny College has educated and engaged a civically-minded citizenry.”

In my view, the statements made by some US college presidents in January this year signal an important rethinking and redefining of what colleges are, and the role they play. Looking at the essay “Liberalism and Its Discontents”, released by political scientist Francis Fukuyama in October 2020, the political inclinations of higher education leaders in the US are generally in line with how it defines liberalism.

According to Fukuyama, one fundamental value of liberalism is tolerance, because classical liberalism was “simply a pragmatic tool for resolving conflicts in diverse societies”. Liberalism protects diversity and supports equal rights for all; it is strongly associated with property rights, economic growth, and modernisation. “A liberal state will not tell you how to live your life, or what a good life entails; how you pursue happiness is up to you.”

However, under the arch of liberalism, the reflections and comments from these US college presidents are more in line with the intellectual “progressives on the left” that Fukuyama describes. Compared to absolute individual freedom, left-wing progressives are more interested in equality; they are opposed to racism, sexism, and anti-gay bias. These unjust attitudes persist in traditional liberal societies, which means that classical liberalism, with religious freedom as its starting point, does not give precise, in-depth answers to the real questions of modern society in issues such as gender, race, sexual inclinations and others. Hence, colleges have to commit to eliminating such social injustices.

In fact, the comments above from the college presidents almost unanimously point to “injustice”, and see white supremacy — driven by fear based on manipulated facts — as a violation of racial justice and the greatest threat to US democracy. That is also their definition of what happened on 6 January. When the tolerance towards diversity shown by many private colleges in the US became the mainstream, and when this mindset clashed with the schools’ historically religious backgrounds and conservatism, that is when today’s academic community became inclined to break with the religiosity that had been around for so many years, to safeguard this rising tolerance.

The hope is that apart from seeing college as an investment and a route to a reward, students will also take social science courses that include critical thinking, so as to encourage a diverse world view with a macro perspective, as well as some form of ethics.

The reflections by the college presidents on the role of colleges show that democratic freedom as they understand it is not an unlimited expansion and misuse of “the individual comes first”, nor is it an acceptance of narrowly ethnic and aggressive populism. Rather, it is the hope of building freedom on a highly educated populace, who have civic awareness, who respect processes, value the combination of authority and duty, and respect diversity and minority rights.

Given the strong emphasis on equality in these ideals, higher education institutions in the US constantly educate teaching staff and students on aspects of equality, anti-discrimination, and tolerance, with courses on “Power, Privilege, and Difference” (a reference to a book by Allan G. Johnson) as a category and uniform label for related courses. The hope is that apart from seeing college as an investment and a route to a reward, students will also take social science courses that include critical thinking, so as to encourage a diverse world view with a macro perspective, as well as some form of ethics.

I feel that higher education in the US is still based on “liberalism” and has never stopped advocating academic freedom. However, its social ideal is the pursuit of a “higher” freedom that would be the result of contemporary elite education.

Related: Capitol siege: Is American democracy doomed? | US Capitol siege: Lessons for China in a post-reality, post-truth era | America's flawed democracy: When power and cognitive abilities of the people fail to match