The recent conviction of former Harvard department head Charles Lieber has cast the spotlight once again on China’s Thousand Talents Plan to attract global scientific talent to contribute their expertise to China. The American scientific community is pushing back against some of the US government’s harsh reprisals, but Hu Hao says strong action is warranted as the threat of authoritarian regimes seeking to gain technical knowledge to threaten democratic and liberal values is real. 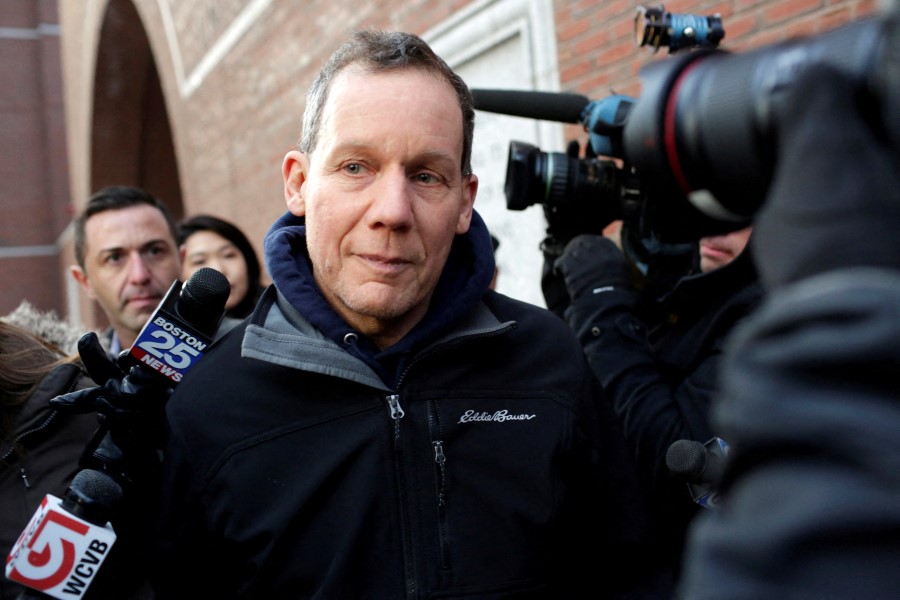 Charles Lieber leaves federal court after he and two Chinese nationals were charged with lying about their alleged links to the Chinese government, in Boston, Massachusetts, US, 30 January 2020. (Katherine Taylor/Reuters)

Candice Chan - 30 January 2023
A mall in Shenzhen came under fire for putting up white lanterns with black text as part of its Chinese New Year decorations, while an “ugly” rabbit-shaped light decoration was removed from another mall in Chongqing. Academic Zhang Tiankan muses on tradition and innovation, and the evolution of traditional decorations.
Read more
Translated by Candice Chan on 3 February 2022

Charles Lieber, former chair of Harvard University’s Chemistry and Chemical Biology Department, was recently convicted on multiple counts, including lying to federal authorities about receiving funding from the Chinese government’s Thousand Talents Plan (TTP). Previously, over 100 professors — particularly those of Chinese descent or with connections to China — defended his actions, with some even claiming “Asian discrimination”. The jury’s verdict has sounded an alarm for “double dealers” in US universities and research institutions.

Lieber’s area is nanoscience; nanotechnology is the application of nanoscience, which could radically transform sectors from medicine and healthcare to manufacturing. His work is credited with helping to develop “nanoscale silicon wires (that) can be configured as detectors that turn on or off in the presence of a single virus particle”. Lieber and his partners hold over 35 patents.

As one of the top scientists in the US, Lieber was previously awarded over US$15 million in grants from the US National Institute of Health (NIH) and the US Department of Defense (DOD). These grants require recipients to disclose any conflicts of interest, including financial support from foreign governments or organisations. However, Lieber did not reveal his position as a “strategic scientist” at the Wuhan University of Technology (WUT) and his participation in China’s TTP from 2012 to 2017.

According to the US Department of Justice (DOJ), the Chinese government started the TTP in 2008 to “attract, recruit and cultivate high-level scientific talent in furtherance of China’s scientific development, economic prosperity and national security”. The TTP is directly managed by the Chinese Communist Party (CCP) and implemented by the Organisation Department of the CCP Central Committee. The plan is targeted at experts and leading researchers in key strategic sectors, such as AI, regardless of nationality or race. The TTP allows the CCP to leverage the openness and academic freedom in Western democracies, and gain leading technology and research from overseas.

Professors who do not disclose links to TTP a loophole

Lieber is a classic example of how the TTP works. Under the terms of Lieber’s three-year Thousand Talents contract, WUT paid Lieber a salary of up to US$50,000 per month, living expenses of up to US$150,000 and awarded him more than US$1.5 million to establish a research lab in China. In return, “Lieber was obligated to work for WUT 'not less than nine months a year' by ‘declaring international cooperation projects, cultivating young teachers and Ph.D. students, organising international conference(s), applying for patents and publishing articles in the name of’ WUT.”

Receiving funding or being on the payroll of overseas universities is not against the law, but the law requires Lieber to disclose these financial transactions while pursuing projects sponsored by NIH and DOD. Lieber did not disclose of his own accord his connections to WUT and the TTP, and even repeatedly denied such links under questioning by the NIH and DOD.

Lieber is not the only American who has hidden the facts about his salary in China and his participation in the TTP. Many participants do not disclose their involvement in the TTP, or any financial rewards they receive. For instance, an official at Texas A&M University found that over 100 of its teaching staff are involved in the TTP, but only five disclosed it.

US authorities have been slow to recognise the TTP’s threat.

The implementation of the TTP has also raised serious concerns. Firstly, during the application process, potential candidates are required to submit their research details to agencies directly administered by the CCP for approval. Academics under the TTP are often required to sign legally binding contracts from Chinese agencies, including provisions that US authorities think violate the country’s standards for research integrity. They also put members of the TTP in dangerous legal dilemmas, and undermine the American values of “reciprocity, integrity, merit-based competition, and transparency” that the US’s scientific research enterprise is built upon.

Secondly, many technologies and research that Chinese research institutions are after often have the potential for both civilian and military use. US authorities are naturally worried that the TTP would facilitate technology transfer to China and possibly threaten US national security.

US authorities have been slow to recognise the TTP’s threat. During the Donald Trump era, the Federal Bureau of Investigation (FBI) and other American government agencies finally stepped up their scrutiny of federal grant recipients' ties to China. The Wall Street Journal reported that in the 24 cases that the DOJ has filed against American scientists, nine of the defendants have pleaded guilty, while charges have been dropped completely in six others. Officials have also dismissed the charges against five others because the scientists involved had all been detained or put under other restrictions since a year ago and were already adequately punished.

American universities and scientists have been pushing back against such US government actions as they think cross-border scientific cooperation is good for scientific development. While such remarks may be valid in other contexts, they have overlooked the true nature of the CCP and how it manages Chinese society.

Everything in China, including universities, serves the needs of the CCP.

Talent programmes a true political tool of the CCP

The CCP sees Chinese universities and research institutions as drivers of its ambitious plan to dominate the world. Thus, it is impossible for these Chinese organisations to operate in the same manner as their American counterparts, which are purely driven by academic motivations. Everything in China, including universities, serves the needs of the CCP.

The CCP thinks that the TTP has achieved great success. As of 2017, China has reportedly recruited 7,000 researchers and scientists, including 70 Nobel laureates, over 300 US government researchers and over 600 employees of American enterprises. The technical knowledge shared by these scientists has enabled China to close the technological gap with the US at a shocking speed.

We have already witnessed some of the effects of a tech-savvy communist China. The CCP established an extensive surveillance system to monitor its citizens and suppress dissent. It even exports its surveillance systems to assist other regimes in doing the same. China’s technological advancements have also allowed the CCP to modernise the Chinese military and develop advanced weapons. For example, China recently tested a hypersonic missile based on a design by a NASA scientist, shocking the US military and intelligence community.

Thus, American scientists, universities and research institutions must not naively see their cooperation with Chinese counterparts as harmless scientific exchanges. They must recognise the serious geopolitical risks and ethical implications of cross-border cooperation, and do their part in preventing authoritarian regimes from using their technical knowledge to threaten democratic and liberal values. Relevant US law enforcement agencies, especially the FBI, must strengthen their investigations into the scientific community and mete out due punishment to those involved, so that “two-faced” lawbreakers will be severely punished.

Related: Did Chinese spies steal US technology? US thinks so and is taking action | Clamp down on Chinese students and academics? America’s loss is China’s gain | Why US academics are protesting against the Department of Justice’s ‘China Initiative’ | An eye for an eye: Souring China-US relations at point of no return?