War of words over efficacy and safety of vaccines: Will China win?

A media war is underway between the state media in China and the media in the US and Europe over vaccine development, distribution and reception. With loud hailer tactics used all round, it’s not the truth but what people perceive to be true that counts most. Whose voice will be the loudest to drown out the din and shape the vaccine narrative? 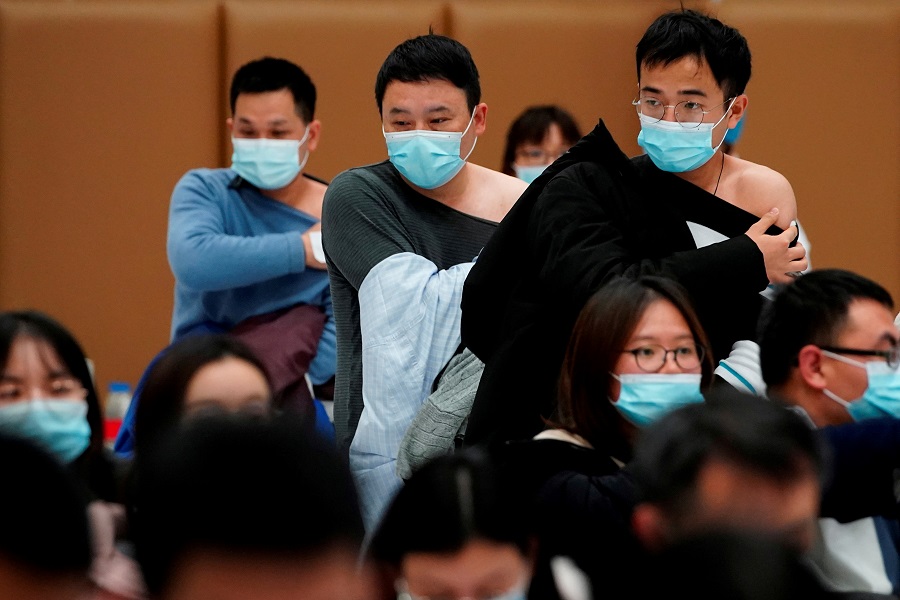 People stand at a vaccination site after receiving a dose of the Covid-19 vaccine, in Shanghai, China, 19 January 2021. (Aly Song/File Photo/Reuters)

In the midst of mad scrambles by nations to get their citizens vaccinated against Covid-19, Reuters reported this week that a Peruvian volunteer in a China-made Sinopharm vaccine trial has died. It initially said that the Peruvian university involved in the trial did not know if the volunteer had been given the vaccine or the placebo, triggering a heated debate on China-made vaccines. When it updated its report a few hours later, the university confirmed that the volunteer was given the placebo and that her death was unrelated to the vaccine. Notwithstanding that it was a false alarm, the sensitivity of the vaccine safety issue as well as media approaches to reporting such stories have certainly been highlighted.

As of yesterday, global Covid-19 cases have exceeded 100 million, with the death toll standing at nearly 2.2 million. Less apparent is the public diplomacy war vis-à-vis Chinese and foreign vaccines taking place and the ongoing war of words. The state media of China as well as the media in the US and Europe are at the forefront of this battle. Everyone is pointing fingers at one another, accusing each other of being the culprit for triggering this public opinion war.

The New York Times published a special report on Monday, saying that the Chinese government had wanted to achieve “a geopolitical win” through vaccine diplomacy but their vaccines have instead “set off a backlash” in some places. This has been due to Chinese companies being “slow to ship the doses and ingredients” and giving “slow and spotty” disclosures about the vaccines, inviting complaints from Brazilian and Turkish officials. Moreover, it is also concerning that “China’s vaccines, while considered effective, cannot stop the virus as well as those developed by Pfizer and Moderna, the American drugmakers”.

Later, English and Chinese platforms of China Central Television (CCTV.com) reported that the EU was angry that the UK-based AstraZeneca Plc and the US’s Pfizer had reduced or slowed down their supply of vaccines to the EU. Italy has even threatened to sue both companies. The amount of attention that this piece of news is receiving in China is clear as it even topped the searches on China’s social media websites yesterday.

The examples above are just the latest round in the war of words between Chinese and foreign media over the Covid-19 vaccine. In a previous battle, Chinese and Western media had argued over the safety of Pfizer’s Covid-19 vaccine. The trigger came on 14 January when the Norwegian Medicines Agency released a statement on the deaths of 23 elderly people (this number has risen to 33) after getting the Pfizer vaccine. Germany apparently also experienced a similar situation with ten elderly people dying shortly after receiving the vaccine.

While not ruling out the possibility that an adverse reaction to the vaccine had something to do with the elderly deaths, the local health authorities in Norway said there was no clear connection between the deaths and the vaccine. Head of the Norwegian Institute of Public Health Camilla Stoltenberg explained, “It is important to remember that about 45 people die every day in nursing homes in Norway, so it is not a given that this represents any excess mortality or that there is a causal connection.” German experts also said that there was no direct link between the deaths of the ten elderly people and the vaccine.

They accuse Western media of blatant double standards in immediately hyping unfavourable information about China’s vaccines and being the first to stick invisible geopolitical labels on vaccines, and using the power of mainstream media to boost Pfizer’s vaccine while knocking China-produced vaccines.

Third-party medical scientists, however, opined that the deaths in Norway might be due to the authorities not carrying out strict gatekeeping and monitoring of the recipients of the vaccine — after all, the Pfizer vaccine has been widely used in the US and UK with no reports of multiple deaths. Whatever the case, Norway’s Prime Minister Erna Solberg said on Tuesday that her administration will adjust its strategy and will no longer vaccinate the most vulnerable elderly. However, she also said she did not think there is a safety issue with the Pfizer vaccine.

These unfortunate incidents have provided China with ammunition to hit back in the debate over vaccines. Since mid-January 2021, China’s Global Times and other official media have released social media posts and commentaries questioning the Western mainstream media’s “collective silence” and “downplaying” of such news. They accuse Western media of blatant double standards in immediately hyping unfavourable information about China’s vaccines and being the first to stick invisible geopolitical labels on vaccines, and using the power of mainstream media to boost Pfizer’s vaccine while knocking China-produced vaccines.

The reasons are many: figures for the Sinovac vaccine do come out slower, China does lag behind Europe and the US in science, and the West still has a deep impression of how China previously covered up the coronavirus outbreak.

Interestingly, a lot of Western mainstream media is keeping a close eye on Chinese media, and they are countering the accusations. A recent CNN article, for instance, accused China of launching a “dangerous disinformation campaign” and attacking other vaccines to defend its own; it warns China that this could “risk undermining overall confidence in mass vaccinations” and would undermine efforts towards herd immunity. The Frankfurter Allgemeine Zeitung and France’s Le Point also had similarly sharp commentaries.

The fact is, there are many reports in Western media on the Norway deaths. But it is also a fact that some Western media is harsher and more gung-ho when it comes to China’s vaccines. The reasons are many: figures for the Sinovac vaccine do come out slower, China does lag behind Europe and the US in science, and the West still has a deep impression of how China previously covered up the coronavirus outbreak. The narrative of Western reports reflects the worsening impression that the West has of China, nor are they hiding their unhappiness and prejudice against China.

As for some Western media saying that commentaries circulating online in China of Pfizer’s vaccines having a lower efficacy were commissioned by the Chinese authorities, that is just creating concerns of their own. Don’t forget — China’s Fosun Pharma is currently working with Pfizer.

Each side is sure that the other side cannot be convinced, and so everybody is just repeating what they believe.

So, can we trust China’s vaccines? Logically speaking, Sinopharm’s vaccine is safe, otherwise, what did China’s political leaders and soldiers receive? So far, Sinopharm is the only Chinese vaccine company that has released its test data, claiming 79% efficacy, while the figure previously released in the United Arab Emirates was 86%. As for the Sinovac vaccine used in Brazil and Indonesia, its efficacy is reportedly between 50% and 65%. So, while the efficacy rates of China’s vaccines are lower than Pfizer’s 95%, they are cheaper and — going by reports so far — have lesser side effects.

The fact that multiple vaccines were developed and put into emergency use in just one year is actually a collective achievement for humanity, but the face-off between China and the West over the pandemic and the vaccines is not lessening. The West feels that the Chinese media is attacking, but China feels that it is being forced to defend itself. Each side is sure that the other side cannot be convinced, and so everybody is just repeating what they believe. It can be foreseen that even when the pandemic ends, there will remain a deep schism between China and the West.

Related: Chinese city offers trial coronavirus vaccine and people are queueing for it | Chinese, American and European vaccines — will we have the luxury of choice? | Life is short. Would you risk yours for a Covid-19 'challenge trial'?