With rumblings of US House Speaker Kevin McCarthy possibly visiting Taiwan in spring, Yang Danxu observes that this will not be the last we see of the “Taiwan card” being played by US politicians as they move into the second half of the current US presidency. 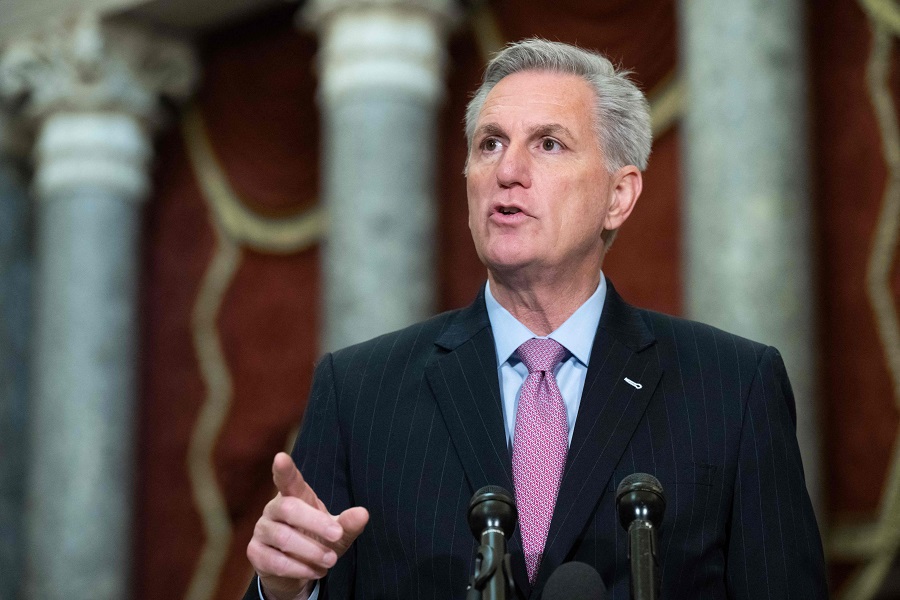 US House Speaker Kevin McCarthy, Republican of California, holds a press conference in Statuary Hall at the US Capitol in Washington, DC, US, 12 January 2023. (Saul Loeb/AFP)

Grace Chong - 30 January 2023
In the last of a six-part series on hiking in Hong Kong, cultural historian Cheng Pei-kai shares the wonders of Hong Kong’s hiking trails. As he rediscovers the hidden splendour of Ma On Shan on a difficult hike, he marvels at the ingenuity of the gods, keeping the pristine away from the evil world. Only the most determined will glimpse unparalleled beauty.
Read more
Translated by Grace Chong on 25 January 2023

On the second day of Chinese New Year, American media Punchbowl News dropped a news item that rattled both sides of the Taiwan Strait: the Pentagon was preparing for US House Speaker Kevin McCarthy’s visit to Taiwan.

Although the report said that planning was in the early stages, it quoted officials familiar with the matter saying that the trip could take place in spring.

Since McCarthy’s House Speaker bid last year, there has been much speculation of his possible visit to Taiwan. While the news has not been confirmed by either the US Department of Defense or McCarthy’s office, the likelihood of it being true is not low.

A political news site reporting on policy trends in Washington, Punchbowl News is funded by a membership-based news community. Its founders are former senior journalists covering the US Congress, who no doubt still have formidable political connections. After the article was published, Taiwan confirmed that it had indeed extended an invitation to McCarthy to visit Taiwan. Democratic Progressive Party legislator Wang Ting-yu said on 24 January that during a visit to Washington he had made on behalf of Legislative Yuan president You Si-kun in September 2022, he had extended an invitation to McCarthy to visit Taiwan.

Prior to Pelosi’s visit to Taiwan last August, it was a big question mark as to whether she would make the trip. Some media outlets first reported last April that Pelosi would arrive in Taiwan on 10 April to commemorate the 43rd anniversary of the Taiwan Relations Act. But this drew the ire of Beijing, and Pelosi’s office subsequently postponed the speaker’s Asia trip after she tested positive for Covid-19. Even until the eve of Pelosi’s trip to Taiwan in August, the Joe Biden administration and the Pentagon had tried to dissuade her, advising her that it was not a good idea to do so.

From McCarthy’s perspective, a visit to Taiwan has obvious political benefits. He has always held a hawkish stance on China...

If it was hard then to dissuade Pelosi, a Democrat, from making the trip, it would be even harder now for the Biden administration to dissuade McCarthy, a Republican. Notwithstanding Beijing’s pressure, the Biden administration has more reason to turn a blind eye to McCarthy’s possible Taiwan visit by asserting the separation of powers between the executive and legislative branches of the US government. Perhaps because the trip cannot be averted, the Pentagon is also drafting military security plans to prepare for McCarthy’s potential Taiwan visit.

From McCarthy’s perspective, a visit to Taiwan has obvious political benefits. He has always held a hawkish stance on China and once called for an investigation into the origin of Covid-19. He had also expressed support for Pelosi’s Taiwan trip, and said that he would love to visit Taiwan if he were to be elected speaker.

On 7 January, after 15 rounds of voting over four days, McCarthy scraped his way through to the third highest seat in US politics. His bumpy ride to office means that he will have to produce some quick results, or fulfil his previous commitments, in order to firm up his position.

A few days after he took office, the House of Representatives voted to create a House Select Committee on China to handle the challenge from Beijing. With “resisting China” a rare point of consensus between both political parties in the US, a trip to Taiwan would highlight McCarthy’s support for Taiwan and strengthen his “resist China” tag.

On 23 January, political risk consultancy Eurasia Group also analysed that amid the tough stance of both US parties towards China, Pelosi’s visit set a precedent for her successors; the Speakers after her — especially Republicans — face a higher standard. So, McCarthy also has to plan to visit Taiwan, so as not to seem weak towards China.

... including sending drones across Taiwan and blocking off some outlying islands in the Taiwan Strait, “taking the opportunity to push anti-Taiwan independence military action to new heights” — Chinese military expert Wang Yunfei

If McCarthy does visit Taiwan, it is sure to touch a nerve again in cross-strait and China-US relations. Beijing is prepared for this prospective visit. After McCarthy became Speaker, on 8 January the People’s Liberation Army (PLA) conducted naval-air drills around Taiwan, with 57 Chinese aircraft detected by Taiwan's Ministry of National Defense (MND).

VOA also reported that on 17 January, during a conversation between deputy director of China’s Office for International Military Cooperation of the Central Military Commission Song Yanchao and US Deputy Assistant Secretary of Defense for China Michael Chase, China also raised concerns about a potential visit to Taiwan by McCarthy.

In a commentary on 24 January, Chinese military expert Wang Yunfei predicted that if McCarthy does visit Taiwan, the PLA will not do what it did with Pelosi, but will take “more comprehensive and powerful action”, including sending drones across Taiwan and blocking off some outlying islands in the Taiwan Strait, “taking the opportunity to push anti-Taiwan independence military action to new heights”.

... the increasing provocation means that there is a possibility the “guardrails” between China and the US might be breached...

This is just a hypothetical assessment, but under the pressure of public opinion, it is hard for Beijing not to respond strongly, which also means that the slight easing of tensions following the meeting of the Chinese and US leaders in Bali will not last.

As we move into the second half of the current US presidency, a visit to Taiwan by McCarthy will not be the last “Taiwan card” played by US politicians. Even if Beijing does not want to initiate military reunification with Taiwan or fall out with the US, the increasing provocation means that there is a possibility the “guardrails” between China and the US might be breached, while Taiwan as “the most dangerous place on earth” may very likely be repeatedly pushed to the brink.

This article was first published in Lianhe Zaobao as “如果麦卡锡访台”.

Related: What could stir up trouble in the Taiwan Strait in 2023? | A Xi-Biden handshake does not bridge the Sino-US schism, but it's a start | Grey skies: Outlook for US-China relations in 2023 | Taiwan: A runway for great powers to flex their muscles?