Lee Huay Leng, editor-in-chief of SPH Chinese Media Group, believes that the personal stories of ordinary people in China during Covid times form a rich tapestry of China’s story too. When all this is past, and one looks back on the present, apart from national pride, will personal dignity and feelings be remembered? 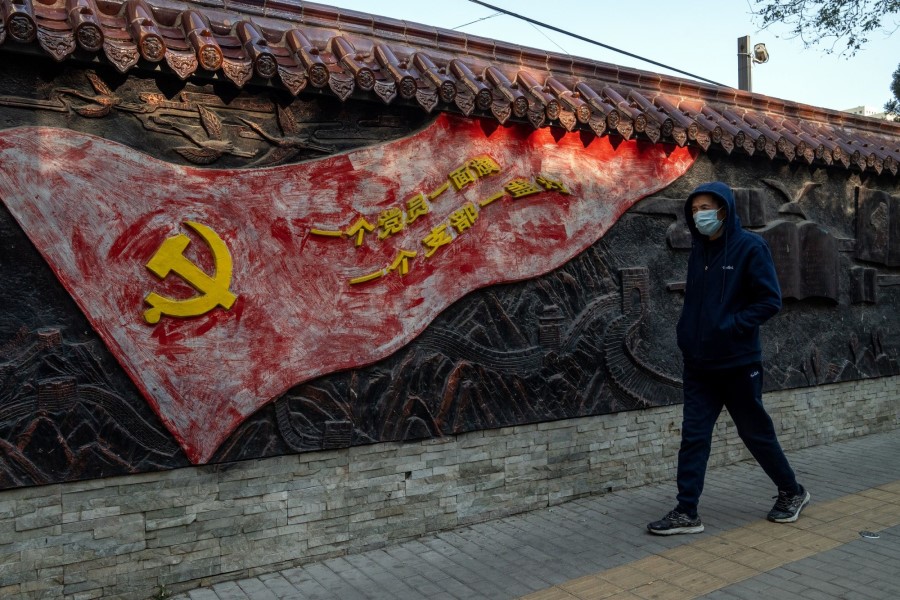 A mural of the Communist Party of China flag in Beijing, China, on 14 November 2022. (Bloomberg)

Candice Chan - 28 November 2022
Often referred to as the world’s economic “canary in the coal mine”, South Korea has seen its economy tumble over the past year, impacted by external factors such as US interest rate hikes and signs of recession in key trade partners. The accumulation of domestic factors — currency crisis, tumbling stock market and rising inflation — is also hitting the South Korean economy hard. However, this industrial powerhouse has the domestic means to climb out of the doldrums.
Read more
Translated by Candice Chan on 15 November 2022

Over two years ago, the pandemic swept the globe while China was gradually returning to normal after the Wuhan lockdown. During a meal with a friend who had business dealings all over the world, he shared that he was still going to China quite frequently for meetings. The number of days he spent in quarantine in each city would change depending on the local epidemic situation — he was once quarantined for 28 days from arrival to destination. But he did not mind, and was full of praise for China’s pandemic control; he even complained it was troublesome to wear a mask when he got back to Singapore.

When I met him again recently, he told me about his frustrating experience in China two months ago, including how he was initially unable to go for a meeting in Beijing because his Beijing Health Kit (健康宝) app sent pop-up notifications of being in contact with a confirmed case, along with a bunch of text instructions. But after he changed his itinerary to visit another Chinese city, his Health Kit app gave the all-clear, and he had to revise his itinerary again.

My friend said another colleague of his had wanted to meet up with him, but on arrival was sent to quarantine for ten days. On being released, he rushed to the city where the meeting was held, but tested positive and was taken away. The other guests at the hotel also had to be checked, and even the luggage had to be disinfected. My friend’s colleague was befuddled — he was isolated for ten days, so how did he get infected? After the luggage was disinfected, it was 3am by the time he went to bed.

Early the next morning, he went to the meeting, only to find that his other colleague was also taken away, and there was nothing he could do. After a delay of a few more days, the other colleague came back — it turned out he had tested positive in Singapore a few months ago, and there were traces of the virus, so he was considered a confirmed case. These were the extremely unfortunate circumstances that people went through.

Like many people, my friend looked forward to some exciting news from the press conference by the Joint Prevention and Control Mechanism of the State Council on 12 November, only to be disappointed when the authorities announced there would be no change to the general dynamic zero-Covid policy. I said for such a large country, the official narrative cannot change just like that; at least they have emphasised that the local authorities cannot take a one-size-fits-all approach, and this will take time. Given his much greater in-depth experience and contact with China, how could he not know this? So he just made helpless noises of agreement.

A reflection of China now

Reading through the articles from our correspondents over the past few months and having heard stories from various channels about the dynamic zero-Covid policy, and then observing the market reactions following the 20th Party Congress, I have been mulling over how we should think about China. Market analyses reveal many pessimists, and even angry people.

When many people have stories to tell amid the dynamic zero-Covid policy, or when people around have experiences that are narrative material, every detail in their simple stories becomes part of the China story.

Also, following the 20th Party Congress, a pall has been cast over the market. Foreign investor friends say that in the past, everyone flocked to China, but now the trend is ABC — “All But China”. But Chinese official contacts are nonchalant and feel that these people are misreading and “badmouthing” China, and that China’s situation will soon improve and it will continue to open up.

At the same time, some friends who are not very good at telling stories have recently been enthusiastically giving detailed accounts of their experiences; sometimes it feels like they are characters in a farce. When many people have stories to tell amid the dynamic zero-Covid policy, or when people around have experiences that are narrative material, every detail in their simple stories becomes part of the China story. It seems that everyone’s experiences can be written into a novel about the pandemic, or a short film. These personal narratives of real experiences come together to form a picture of China right now.

If a photographer or videographer captured scenes in China now, would it be of people queuing for Covid tests, or the gloomy faces of small business owners, unable to open their stores and facing losses due to strict Covid measures? Or the anxious expressions of business owners facing fewer orders, piled-up stocks, and no cash flow? The Chinese authorities are focusing on telling the China story well, and have put a lot of resources into doing that, but the spread of these real personal experiences among the people amid pandemic fatigue is a stronger portrayal of China to the outside world.

On the path of China’s rise, there have been moments of downturn; but after taking another step, there has been new growth. So, does that mean we cannot just fixate on a certain point in time?

How should we think about China, and consider the changes of a century? I often remind myself to think of China in the context of a longer time period and not just look at the current situation. In different historical periods, China faced different challenges. Looking at China at those times, how many people would be sharp-eyed enough to see farther into the future?

As I was going through some reading material, I wondered what kind of questions and doubts the people living in 1990 would have had about China’s development. That year, China’s economy slowed down and the world was stunned by the Tiananmen incident, and the subsequent climate of international opinion was much against China. Of course, that was a very different climate than today. But it was at that very time that China’s leaders took a number of decisive measures to prove to the world that the policy of reform and opening up would not change. On the path of China’s rise, there have been moments of downturn; but after taking another step, there has been new growth. So, does that mean we cannot just fixate on a certain point in time?

Will this year be a turning point in how foreign investors see China? Or will current sentiment be short-lived as well?

Going into the last two months of 2022, I have not stepped into China once in the last three years. What about after 2022? For many foreign businesses, what they have experienced over the past year is the unpredictability of China’s policies, and this unpredictability is the only thing that is predictable. Unpredictability is an enormous cost for companies. Even if China announced adjustments to Covid control measures on 11 November, the impression made over this period will not change immediately. Will this year be a turning point in how foreign investors see China? Or will current sentiment be short-lived as well?

Given his personal experience, the friend I mentioned before no longer speaks of China with the same enthusiasm as two years ago. But China's huge market makes him pragmatic in sharing his experiences. He told me that some cities in China are indeed facing difficulties with local budgets, but the main difficulty is due to people. With so many clever people in China, everyone is just waiting for policies to ease, and the economy will rebound immediately, and the outlook will change. The new leadership team has a clear core and has consolidated its power. Moving in step has its benefits — the key is moving in the right direction. My friend gave a detailed description of the travails of quarantine, but he also gave a reminder that we have to be optimistic and prepared.

... at that time, when we think back to the many personal experiences since 2020, will their China story be lost in the river of time as a necessary price to pay for growth?

I tried to take myself out of the present. I thought of years later, say 2035. How would we look at the happenings of 2022? Looking at China's issues often makes me want to look back from years into the future. If in 2035 China goes with its plan and its economy doubles while its GDP reaches that of an average developed country, what kind of world would that be?

And at that time, when we think back to the many personal experiences since 2020, will their China story be lost in the river of time as a necessary price to pay for growth? In a country where people come first, in the grand design of the nation, apart from national pride, will personal dignity and feelings be remembered? And how should they be remembered?

This article was first published in Lianhe Zaobao as "教我如何思考她".

Related: Chinese ambassador Sun Haiyan: Why not think about China in this way? | China eases pandemic rules but people are worried | Tough Covid measures in China may drag on for another year | Shanghai's Covid shutdown is disrupting domestic and global supply chains | China's exorbitant cost of zero-Covid | It takes a mountain of effort to tell the truth about China's economy | Best of both worlds: China wants both zero-Covid and economic growth | How China's health code app permeates daily life and may still play a role post-Covid