Hong Kong political columnist Chip Tsao makes his observations on an emerging group of people who lack sufficient job security and face a sense of uncertainty and precariousness — the precariat. This group is plugged in to social media, which means they have quick access to information, but are also able to make comparisons that might lead to dissatisfaction. Will the civil servants running Hong Kong be able to empathise with this increasingly marginalised group in society? 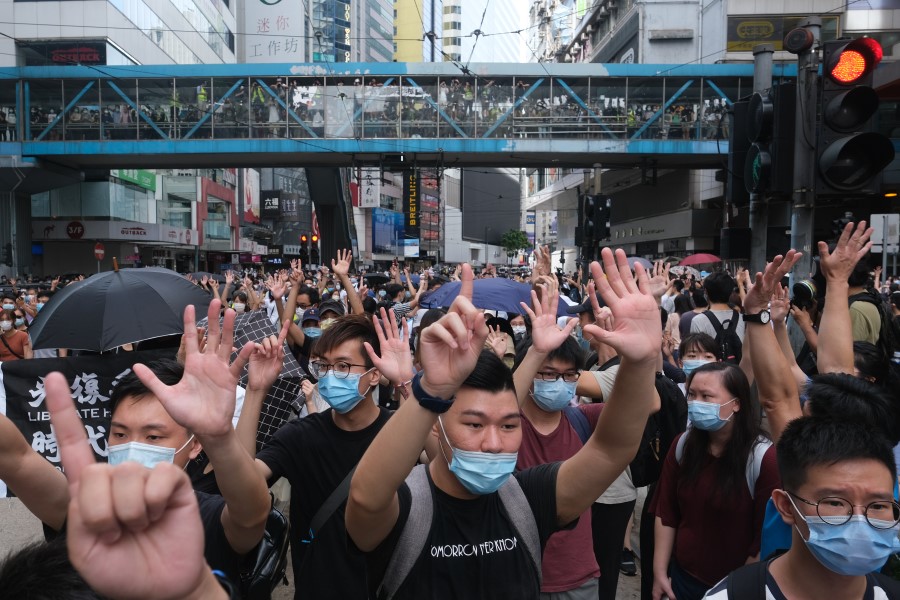 Demonstrators gesture the "Five demands, not one less" protest motto during a protest in Hong Kong, China, on Wednesday, 1 July 2020. Hong Kong woke up to a new reality on Wednesday, after China began enforcing a sweeping security law that could reshape the financial hub’s character 23 years after it took control of the former British colony. (Roy Liu/Bloomberg)

Candice Chan - 18 January 2022
The first episode of an anti-graft documentary highlighted the case of former Vice-Minister of Public Security Sun Lijun, who built a personal following in the Communist Party of China (CPC) by helping other officials with promotions, despite not being among the very top leadership himself. How did he build up his clique? Zaobao correspondent Yu Zeyuan reports.
Read more
Translated by Candice Chan on 15 July 2020

As globalisation crumbles, the “Made in China” production chain is starting to break. And with the coronavirus spreading globally, the global economy is sinking into the depression of a century.

In Hong Kong, thanks to the legacy of the pre-internet colonial period, only the civil servants — about 180,000 of them — have so-called “iron rice bowls”.

Even if China forces the national security law on Hong Kong, or after a year or so of social unrest, whether Hong Kong’s civil servants are supporters of democracy or “patriots”, as long as they remember to self-censor on social media, they do not have to worry about losing their jobs.

In contrast, in such uncertain times in the world including the US, even if one finds a job and becomes a paid employee, one would become part of the new group sociologists have dubbed “the precariat”.

The precariat are not unemployed; on the contrary, they have jobs. However, their position is unique — they are neither professionals nor workmen, but their job and status lack development potential. For example, they may be technicians, but on a contract basis.

The precariat may be prone to “status discord”, such as in the case of university graduates being forced by circumstances to take on jobs with a position or income that falls below their qualifications, and experiencing status frustration.

An arts student on their lunch break while driving a cab can always check social media on their mobile and access anti-police street demonstrations, and fully support them.

For instance, Hong Kong universities have arts faculties, and most arts students have a naturally creative and rebellious streak in them. But since the loss of trust between mainland China and Hong Kong over the previous extradition bill, and with the incompetence of the Hong Kong government and the global spread of the coronavirus leading to a lockdown in Hong Kong, even large-scale international art exhibitions are not coming to Hong Kong.

Some university arts graduates cannot find jobs that match their skills, such as becoming museum docents or art teachers in primary and secondary schools, but are forced to become Uber drivers, some for as long as three years.

Uber drivers may not earn that little — maybe HK$20,000 to HK$30,000 after working over ten hours a day. But the job would clearly be demoralising to a university student, who would feel they are not using what they learned, or agree that the incompetence of the Hong Kong government coupled with external factors, has led to them being unable to fulfil their ambitions.

The precariat has become a force in resistance movements around the world, because although they may not take to the streets, they are connected to the internet both at work and off work. An arts student on their lunch break while driving a cab can always check social media on their mobile and access anti-police street demonstrations, and fully support them.

Besides, since the 2008 US financial crisis, many companies have seen their profits shrink. They are unable to give their staff a raise, but do not want to retrench, and so they can only give their staff nicer-sounding titles.

Some workers clearly work independently and do not lead a team, but their title is “supervisor”, “chief executive” and the like. Even an office janitor has a title like “head of recycling” or “head of public cleanliness”. Hong Kong’s bus drivers have long been called “bus captains”, like they are captains of luxury cruise ships.

The work of the precariat might involve some advanced technology, but they themselves do not control or design technology. Meantime, the IT that surrounds us influences the way we think and our ability to think.

Hong Kong’s precariats have become a major force in dissatisfaction with the current situation in Hong Kong; they are now the backbone of Hong Kong’s internet community.

The precariat do not have a long-term or mature outlook on life, because there is no grand plan for their personal career development. Many people cannot make long-term life plans. They are also pressured by their peers’ social media posts, filled with comparisons of each other’s salaries and accomplishments. Such circumstances easily lead to a sense of isolation.

These are not illiterates, but well-educated people who are part of the boom in university degree holders. After all, when Hong Kong was first returned, apart from nine universities giving out degrees, there were also many institutions awarding associate degrees.

Hong Kong’s precariats have become a major force in dissatisfaction with the current situation in Hong Kong; they are now the backbone of Hong Kong’s internet community. Although they curse and swear, with many gong nui (港女, “Hong Kong girls” with stereotypically undesirable characteristics such as materialism and self-centeredness) among them, they are a trademark of this globalised group.

How would someone who graduated from secondary school in the 1970s, who was always considered an elite, who joined the civil service right after graduating from the University of Hong Kong and subsequently became the chief executive, understand the enormous changes in the way people think around the world?

This article was first published in Chinese on CUP media as "不穩定無產階層".