Why it is hard to keep game meat off the table

A wild peacock can easily cost up to 10,000 RMB, and is a way to show off new wealth, while regulating the sale of wildlife is also a thankless labour, and may not help Chinese officials gain merits and advancements. Medical researcher Hayson Wang examines the Chinese’s gastronomic, medicinal and economic appetites for exotic wildlife and the reasons why it is so difficult to regulate and stop wildlife trading in China. 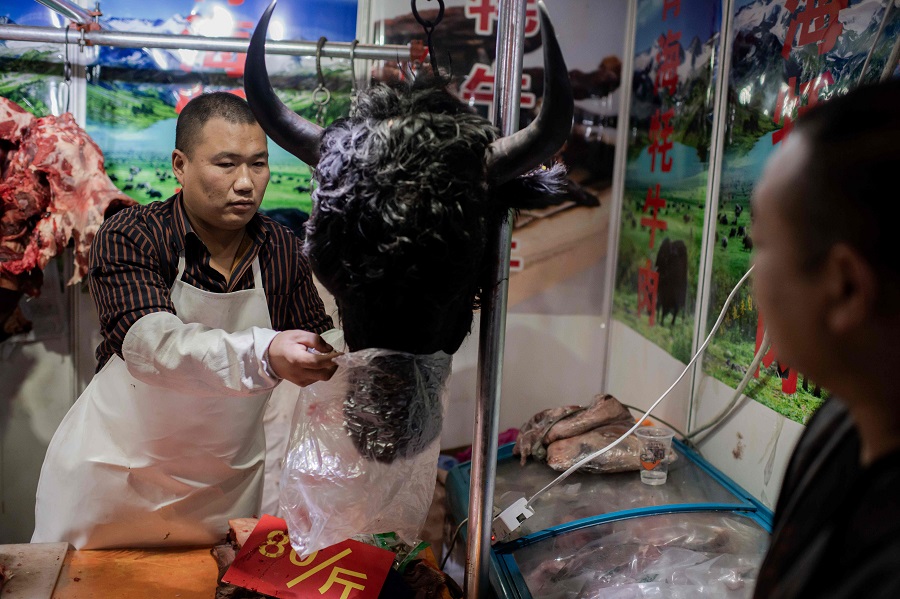 This picture taken on 15 January 2020 shows a butcher selling a yak's head to a customer at a market in Beijing. (Nicolas Asfouri/AFP)

Grace Chong - 29 September 2022
While still reeling from the economic impact of the Covid-19 pandemic, Shanghai has loosened its regulations on the street stall economy. Some believe that the move will breathe life back into the stalled city, while others think it is a stopgap that will do little to help its domestic economy bounce back. Zaobao correspondent Chen Jing tells us more.
Read more
Translated by Grace Chong on 24 February 2020

The novel coronavirus (Covid-19) situation grows increasingly worrying as I write. People are discussing why it is so hard to ban the eating of game meat and the selling of live animals in China. Some chalk it up to the backwardness of Chinese gastronomy. Some blame the governance failure of the country’s authorities. But I think there is really a medley of complex factors behind it all.

The first is the Chinese people’s perennial pursuit of fresh food ingredients. Since public food safety has never been effectively guaranteed, and news about additives, hormones, fakes and food malpractices are so commonplace, the Chinese are generally not confident about the quality of what they eat. For this reason, even though certain ingredients produced in a “non-industrialised” manner — such as cage-free chickens and free-range chickens — may not have undergone formal health inspection and quarantine, they remain highly sought after.

Moreover, the freshness of ingredients has always been highly regarded in China’s culinary culture. It is thought that newly slaughtered animals taste much better. The prices of live animals are naturally much higher, which means it offers a lucrative market that cannot be passed over by vendors. However, if a marketplace were to be set up for the sale of live animals in the central district of any city, it would invite the considerable risk of disease transmission between animals and humans, as illustrated by past encounters with avian influenza. Hong Kong, for one, had experienced an outbreak of the bird flu in the late 20th century precisely because of such circumstances. After the SARS outbreak, they subsequently decided to put an end to urban live animal markets completely, and it has never had another case of humans being directly infected with this disease.

High-demand localities are often the more affluent coastal areas such as Guangdong, rather than Yunnan and Guizhou, where the wildlife live and thrive in abundance.

Another fact to note is that China’s culinary culture has been well-known since ancient times for using an expansive range of food ingredients. It is often said that whether it flies in the air or runs on all fours, practically any creature can be eaten. There are many reasons for this but one has much to do with a particular social reality: that China has a very large population. That people must have enough to eat has always been a top priority, as well as a matter of national prosperity and general livelihood. With so many mouths to feed, the Chinese would naturally choose to consume many ingredients that may be less familiar to Westerners (such as offal) and develop a rich variety of preparation methods for them. Needless to say, wildlife would not be excluded.

In today’s society, however, satisfying hunger is not the main reason for eating wild animals. It is the fascination with the exotic and the belief in their medicinal properties that are the key motivations. In the time-honoured tradition of Chinese medicine, flora and fauna —- even parts of the human body (such as the placenta) —– can serve medicinal purposes. Incidentally, there is a direct correlation between demand and level of economic development. High-demand localities are often the more affluent coastal areas such as Guangdong, rather than Yunnan and Guizhou, where the wildlife live and thrive in abundance.

A wild peacock can easily cost up to 10,000 RMB, which is far beyond the means of ordinary folks.

One of the reasons is that a lot of the consumers of these animals are government officials or businessmen themselves.

Relatedly, the consumption of wildlife products has for some people, become a way to show off their personal wealth. A wild peacock can easily cost up to 10,000 RMB, which is far beyond the means of ordinary folks. There are clearly enormous commercial profits to be had here. A complete production chain of a far-reaching scale is bound to be formed around the strong demand. Consequently, despite knowing that they are breaking the law, some businesses will choose to take the risk, even to the point of hunting, butchering and selling some national-level protected species.

To exacerbate the situation, the government can sometimes lack the motivation to regulate the sale of wildlife properly. One of the reasons is that a lot of the consumers of these animals are government officials or businessmen themselves. It is difficult to be hard on offenders when the overseers are dealing with their own people. Furthermore, even if the prohibition of wildlife consumption or of the sale of live animals in urban areas can effectively prevent epidemics, the authorities will ultimately need to get entire populations to change their ways.

Work along these lines may not gain success within a short time, nor would it easily translate into prominent, concrete achievements. Indeed, it would even incur the discontent of the public to some degree. It is thus very much a thankless labour, and utterly incompatible with the current regime of performance evaluation for local officials. Given that China’s current system of bureaucratic assessment still revolves mainly around economic development and is not too interested in the finer points of the people’s everyday lives, officials naturally focus most of their energy on matters for which they can produce more results and noticeable outputs. What hope is there, then, for the banning of game meat?

Related Reading: Wuhan coronavirus: The search for a permanent solution | Embroiled in controversies: Did Covid-19 come from the Wuhan Institute of Virology?