Putin’s audacious invasion of Ukraine has led to speculations that Beijing is now having second thoughts about its relationship with Moscow. Given the uncertainty of how the conflict would play out, it is unlikely — short of a challenge to the legitimacy of the Chinese Communist Party — that Beijing would make a sudden move to destabilise its relationship with Russia. RSIS academic Benjamin Ho looks at the complexities of the situation. 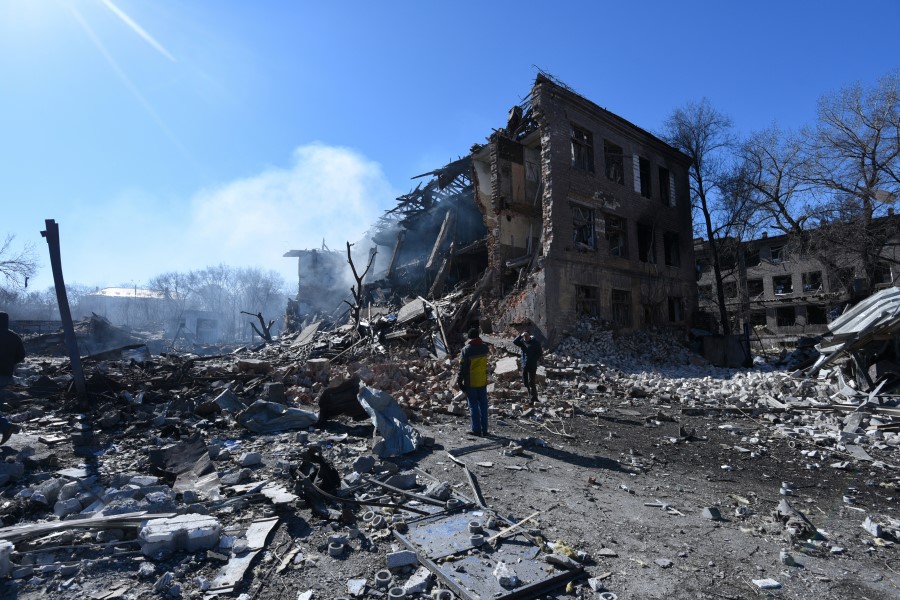 People stand in front of a destroyed shoe factory in the aftermath of a missile attack, amid Russia's invasion, in Dnipro, Ukraine, 12 March 2022. (Mykola Synelnikov/Reuters)

Candice Chan - 30 January 2023
A mall in Shenzhen came under fire for putting up white lanterns with black text as part of its Chinese New Year decorations, while an “ugly” rabbit-shaped light decoration was removed from another mall in Chongqing. Academic Zhang Tiankan muses on tradition and innovation, and the evolution of traditional decorations.
Read more
Translated by Candice Chan on 14 March 2022

The enemy of my enemy is my friend, as the saying goes. Given both China and Russia’s antagonism towards the US over the past two decades, albeit in varying degrees, it is not surprising that both their leaders found it convenient to signal their close ties in a face-to-face meeting during the Beijing Winter Olympics in early February. Terming their friendship as one with “no limits”, Beijing and Moscow — in their respective cultivation of each other — would seem to have found the glue that binds them: their common dislike of the US.

Considering this apparent “no limits” friendship, Russia’s decision to invade Ukraine on 24 February came as a surprise not only to many Western observers but also to Chinese policymakers and public intellectuals. As the Stimson Centre’s Yun Sun observed in a recent commentary, China missed the signs of an invasion and made a strategic misjudgment in part because it had been manipulated by Putin, and also because it had interpreted Moscow’s behaviour based on its own military strategy instead of viewing it from a Russian (or Putin’s) perspective. That said, whatever strains and suspicions between Moscow and Beijing that may arise as a result of Putin’s actions, the Sino-Russian partnership will hold since both sides have no other strategically significant partner than the other.

So how would this affect Sino-Russian relations moving forward? There are at least three scenarios that we should consider, and all would depend on how the Ukrainian conflict plays out.

...any Moscow-designated regime installed in Kyiv is likely to be saddled with a legitimacy deficit. Such an eventuality would pose all sorts of problems for China...

While a swift and decisive victory for Moscow is impossible given the difficulties faced by Russian forces in the first two weeks of the invasion, the overwhelming superiority of Russian military forces suggests that victory is only a matter of time (and costs incurred) — unless NATO and the US decide to intervene militarily. The bigger problem, however, would be that of governing Ukraine.

Considering that the majority of the Ukrainian population are opposed to the Russian invasion and presence, any Moscow-designated regime installed in Kyiv is likely to be saddled with a legitimacy deficit. Such an eventuality would pose all sorts of problems for China, not least because its economic development (as typified by the Belt and Road Initiative, or BRI, for short) is to a large extent dependent on a stable external environment. In this respect, what happens in and to Ukraine will have repercussions for China. As reported, ever since Kyiv joined the BRI in 2017, Chinese companies have been upgrading the country’s ports and subways. In 2020, Ukraine also signed a memorandum of understanding with China’s Huawei, whose efforts to make inroads into worldwide telecommunications networks are being stymied by the US.

In addition, the tanking of the Russian rouble since the start of the war has made Russia a much more unattractive economic proposition for China, even if Moscow has become more reliant on China than before. At some point, Chinese investments in Russia would become an albatross around Beijing’s neck and one which China would be hard pressed to shake off if it is to avoid considerable costs to itself.

Furthermore, given that China frequently touts the need to respect territorial sovereignty, its association with Russia — and silent acquiescence in the Ukrainian invasion — would taint its brand of foreign policy, particularly President Xi Jinping’s slogan of “community of common destiny for mankind”. Indeed, every Russian military advance and territorial grab makes the slogan ring even more hollow. Whatever misgivings Beijing and Moscow may have towards NATO expansion and their views of Ukrainian national identity, an invasion would inevitably be viewed by much of the world as a breach of political sovereignty. Should Russia emerge victorious, Beijing would find it difficult in the future to maintain its high perch in claiming that all countries ought to respect the principle of territorial sovereignty.

A Russian defeat — either as a result of a Kremlin palace coup or at the hands of Western allies — would be a terrible loss of face for Beijing (and Xi) ...

A Russian defeat — either as a result of a Kremlin palace coup or at the hands of Western allies — would be a terrible loss of face for Beijing (and Xi), given the leaders' high-profile relationship in recent times. There are at least two lessons that would be immediately clear: one, that the Kremlin, despite Putin’s bravado, is inherently fragile (should a coup result), and two, that the West is much more resilient than projected by the pundits who proclaim the imminent decline of the West.

Neither outcome would be favourable to China. In the case of the former, it would raise all sorts of questions concerning the viability of authoritarian polities, which, by extension, would implicate China’s own brand of governance. In the latter case, it would send out a reminder that the US and the West are not in terminal decline and that anti-Western prophecies are patently inaccurate.

While a Russian defeat arising from Western invention would not affect the internal dynamics of the Chinese Communist Party, it would surely put paid to the notion that the US and NATO do not have the stomach for another war (or to intervene militarily in other conflicts). This would certainly affect Chinese leaders’ thinking on Taiwan (even though Beijing staunchly insists Ukraine and Taiwan are not comparable) and, consequently, their assessment of the Western political will in preserving the current rules-based international order.

If China intends to shape the rules of the global system in what it believes to be a post-Western world, playing a constructive role in the current crisis would be a good place to begin.

A truce between Moscow and Kyiv

Some kind of mediated truce leading to a ceasefire between Moscow and Kyiv would be the best outcome for Beijing, especially if Chinese leaders are able to claim their participation in such a resolution. To achieve this outcome, China would have to apply political pressure on Putin to demonstrate why it is in Russia’s interests to withdraw its forces and for Moscow to bear the cost of reparations for the damage and destruction caused.

In this respect, China could demonstrate its commitment to Moscow by providing conditional financial support to help nurse the Russian economy back to health. Similarly, it would have to carefully manage its relations with Kyiv by conveying — both in word and deed — that it supports the Ukrainian people’s desire for self-governance and emphatically rejecting any future attempts by Russia (or any other power) to subvert due political process.

Indeed, such an outcome would allow Beijing to maintain the moral high ground while at the same time providing proof that it is prepared to play a role as a responsible great power, one which is not only concerned over matters within its borders, but is also able to contribute to the healing of geopolitical conflict outside its borders. If China intends to shape the rules of the global system in what it believes to be a post-Western world, playing a constructive role in the current crisis would be a good place to begin.

This essay first appeared as RSIS IDSS Paper IP22013 | The Limits of Russia-China Friendship: What are the Options for Beijing? by Benjamin Ho, a publication of the S. Rajaratnam School of International Studies (RSIS), Nanyang Technological University (NTU), Singapore.

Related: Did China miscalculate the Ukraine war? | Why Taiwan is not Ukraine | Will China be emboldened by Russia's invasion of Ukraine? | Does Beijing benefit from US-Russia confrontation over Ukraine? | Claim of US bioweapons operation in Ukraine pushes China closer towards Russia | Elephants in the room: Why China's Two Sessions are a tad dull this year