China's Amity Printing Co. (APC) produces an average of 70 Bibles per minute. This month, Jiangsu-based APC celebrates the printing of its 200 millionth Bible. Yang Danxu observes that its monopoly over the Bible economy helps to ensure that Christianity in China adapts to the context in China, as desired by the Chinese government. 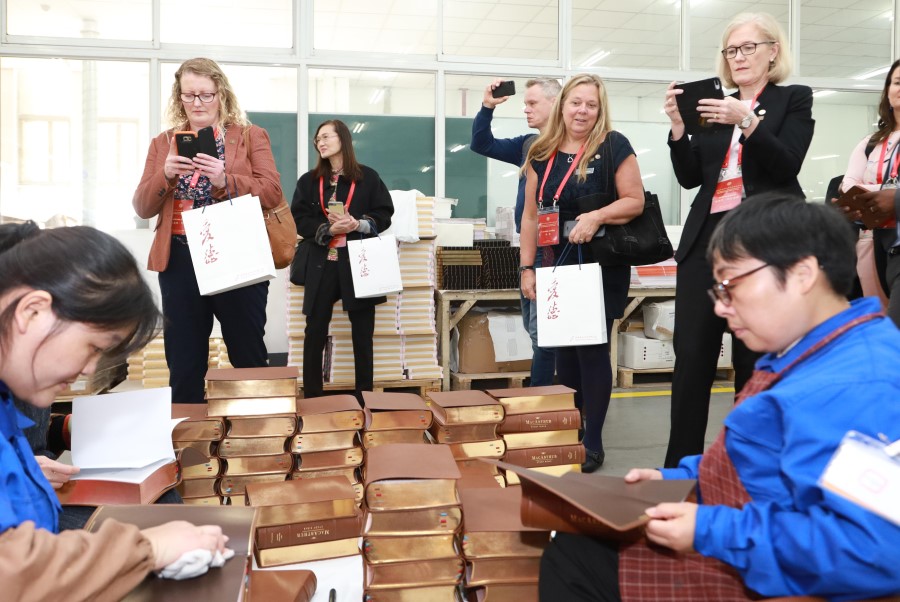 Visitors getting a look at the Bibles churned out by Amity Printing Co. in Jiangsu. (United Bible Societies)

Candice Chan - 25 January 2023
While the Americans have made noticeable progress in their “pivot” to Asia, the crux of successful regional engagement rests on Washington’s ability to work with and around China’s indisputable links and influence in this part of the world, while managing its own relationship with Beijing.
Read more
Translated by Candice Chan on 27 November 2019

The printing facility in Jiangsu province (specifically, in Jiangning district, Nanjing city) is filled with impressive equipment. From prepress to printing to binding, the production line runs rapidly to churn out an average of 70 Bibles per minute, to fulfil the unending stream of orders from all over the world.

For decades, the world has known “Made in China”. But many would be surprised that the largest single Bible production base in the world is located in officially atheist China. This November, Amity Printing Co. (APC) celebrated the milestone of printing 200 million Bibles for believers worldwide.

Religion is not encouraged by the Chinese authorities, but over the years Amity Printing has produced many Bibles for believers in China, and has even become the main global supplier of Bibles, an indication that there is more room for religion in China than one might think.

Following its reform and opening up, religion in China saw a period of new growth, with a severe shortage of Bibles at one point. In 1986, civic groups Amity Foundation and United Bible Societies (UBS) set up Amity Printing in Nanjing, to meet the demand for Bibles among Christians in China.

At the celebratory event, Amity Foundation secretary-general and APC chairman Qiu Zhonghui said that of the 200 million Bibles printed so far, over 85 million have been supplied to churches in China, with the rest exported to 147 countries and regions.

APC currently prints Bibles in over 130 languages. Apart from the more commonly seen Western language editions such as English, Spanish, and German, there are also editions in African languages including Swahili, Amharic, and Oromo.

Furthermore, APC does not just produce standard Chinese language editions of the Bible, but also has editions in 11 minority languages including Hmong, Yi, Lisu, Wa, and Jingpho (Kachin), for believers from China’s minority ethnic groups.

There is also a special workshop at the printing facility, just for the production of Bibles in braille. Each braille Bible consists of 32 volumes, and retails for 32 RMB (S$6.20) per set. APC produces about 160 sets a year.

This reporter understands that the retail price is way below the cost of production. The cost of paper, processing, and shipping for each braille Bible is as high as 2,525 RMB, but UBS, Amity Printing, and China Post share the cost, to make Bibles affordable for visually impaired believers in China.

A registered pastor who attended the event said people got nervous last year when the authorities disallowed online sales of the Bible, but this was unfounded as “there is no problem with supply”.

He explained that the Chinese public is free to buy officially authorised legal Bibles from church venues — meaning APC-produced Bibles, which retail at about 20 RMB for a regular edition.

While the celebratory event was not covered by official mainstream media, this reporter understands that it was supported by the authorities. The 200 attendees included Chinese church leaders, religious academics, representatives from overseas churches, UBS representatives, and also government officials in charge of religion, publicity, and united front work (统战).

On the same day, Amity Foundation held a workshop on the Chinese Bible and adapting Christianity to the context in China, while exhibiting nearly 300 Bibles in conjunction with the 100th anniversary of the Chinese Union Version of the Bible.

APC even opened up its production workshop to its visitors who had come from all over the world, to show how a modern Chinese facility fulfils orders for 15 million books per year, while ensuring strict quality control on each copy of the Bible.

Professor Xu Yihua of the Department of International Politics at Fudan University said at the forum that it would be quite “shallow” to see the printing of Bibles as technical work, noting that exporting Bibles is, in fact, the church in China providing public goods to the international church and even the international community.

He felt that APC has built a global Christian church, particularly in providing a platform for the church in third world countries to connect, communicate, and interact, which has allowed the church in China to spread its influence outside China.

APC also inaugurated its Ethiopia company at the event. Its press release said the move is in line with the Belt and Road Initiative (BRI), marking a new start in APC’s overseas operations. APC had earlier set up its Africa service centre in Ethopia, as well as its office in Kenya.

APC’s success reflects the growth of Christianity in China and its connection with the world. But it also shows that this success is in itself a result of China’s tight control over religion.

Monopoly on Bibles in China

The only way to distribute Bibles in China is under authorisation by the CCC/TSPM (基督教全国两会) consisting of the China Christian Council (CCC) and the National Committee of the Three-Self Patriotic Movement of the Protestant Churches in China (TSPM). The CCC/TSPM is overseen by the National Religious Affairs Administration and the Ministry of Civil Affairs. In recent years, about 3.5 million books are distributed annually.

Bibles are only allowed to be sold in authorised church venues, and APC is the only Chinese enterprise that can legally print Bibles.

... the enormous success of the APC-made Bible reflects China’s wariness about the free movement of the Bible outside of the system.

China’s e-commerce platforms used to carry Bibles published and distributed through unofficial channels. Some underground churches and Chinese with an interest in Christianity would also buy Bibles through online channels. Last year’s prohibition of online sales of Bibles further strengthens the monopoly on Bibles in China.

Some analyses also say that the enormous success of the APC-made Bible reflects China’s wariness about the free movement of the Bible outside of the system.

Besides, the authorities’ longtime trust of APC also probably has something to do with the company aligning itself with official policies on religion, especially in always working towards adapting Christianity to the context in China.

The Amity Foundation is recognised by the Chinese government. Speaking at the event, Li Guohua, vice-minister of the United Front Work Department in Jiangsu, described the Amity brand as a live example of how Christianity is being adapted to the context in China.

China has always emphasised adapting religion to the context in China, by using the core values of socialism to lead and teach religious and lay believers, and integrating religious teachings with Chinese culture. However, such a move has come under question, especially in terms of whether too much political flavour is introduced to religion in the process.

When it comes to adapting Christianity to the context in China, Qiu Zhonghui feels that the spread of any culture has much to do with the country's conditions. Only if that culture adapts to the needs of the society it is in and aligns itself with sociocultural trends will it be accepted and welcomed by the country and society it is in.

He says, “Whether it is discussing the adaptation of Christianity to the context in China, or moving out of China with the BRI to build a community with a shared future for mankind, all this is a significant learning process.”