Analyst Zheng Weibin notes that heightened US-China competition means a technological edge will be key. To safeguard that advantage, the US may rely on state intervention in the science and technology sector, while tapping on its alliance network. How will this approach affect China and the world? 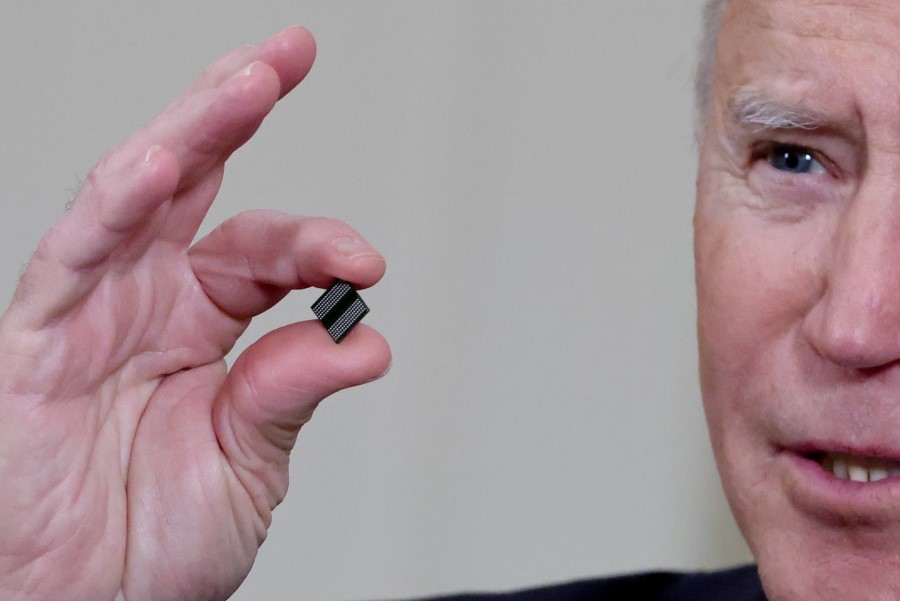 US President Joe Biden holds a semiconductor chip as he speaks prior to signing an executive order, aimed at addressing a global semiconductor chip shortage, in the State Dining Room at the White House in Washington, US, 24 February 2021. (Jonathan Ernst/Reuters)

Candice Chan - 28 June 2022
US-based young comic artist Bei Yi reflects on China's gaokao (university entrance exams), which took place in early June. Every year, Chinese students cross this narrow log bridge of national exams, hoping to find a clearing on the other side. Students from regions across China, rich and poor, see this as a possible ticket to a better life and maybe even a passport to the West. When the stakes are so high, studying becomes a moral obligation to one's family. Some make it out, but on that journey, many things are left behind.
Read more
Translated by Candice Chan on 23 June 2021

Kurt M. Campbell, the US National Security Council’s coordinator for Indo-Pacific affairs, said recently of US-China relations: “The period that was broadly described as engagement has come to an end.” He added that “the dominant paradigm is going to be competition”.

Considering the gap between China and the US in terms of economic scale and strength, this means a long and sustained competition on all fronts is inevitable, and the side that maintains strong economic growth as a pillar might be the final victor.

New technology has been a major reason for the US’s continued economic prosperity over the past decades, and a key strength that allowed the US to win the Cold War against the Soviet Union as well as the competition with Japan. Of course, another important reason that cannot be overlooked is the US’s national technology strategy and state intervention.

How to appropriately use new technology so as to maintain a global lead, and come up with a corresponding foreign policy will have a significant impact on the future of the US.

A key front in US-China competition

Now that the US government has announced a new era of competition between China and the US, the new technology sector will be key. A lot of current research and applications of new technology are seen by the US as major challenges to its democratic system. How to appropriately use new technology so as to maintain a global lead, and come up with a corresponding foreign policy will have a significant impact on the future of the US.

The latest example is the Endless Frontier Act proposed by the Senate Majority Leader Chuck Schumer and Republican Senator Todd Young, which was recently passed by the Senate Commerce, Science, and Transportation Committee with a 24-4 vote.

The main thrust of the Act is for the US government to invest more than $110 billion to ramp up scientific research in ten key technological areas, including artificial intelligence, semiconductors, quantum computing, advanced communications, biotechnology, and advanced energy.

Technology sector in the US will be less laissez faire

However, after taking in numerous amendments, the Act was renamed the US Innovation and Competition Act, and the total budget was increased from US$110 billion to US$250 billion. However, given the huge scale of investment and complexity of the Act, Republican senators did not support it and the vote on it by the US Senate was delayed until 8 June, when it was passed by a 68-32 vote.

In some sense, China-US competition will drastically change the US government’s attitude towards the science sector, from one of laissez faire non-intervention since the 1980s, to being guided by the federal government.

Since World War II, there have been two phases in the US attitude towards the science sector. The first phase was from the end of WWII to the 1980s, followed by the second phase to date. Given its response to Soviet competition, the US government has a lot of real experience in planning and implementing its strategy in technology. In 1957, the Soviet Union launched the first man-made satellite Sputnik 1, a great blow to the US government, triggering what came to be known as the “Sputnik crisis” and the subsequent space race.

In response, the US government set up some powerful new organisations including the National Aeronautics and Space Administration (NASA) and Defense Advanced Research Projects Agency (DARPA), while ramping up R&D spending. By the 1960s, the US federal government was funding nearly 70% of the country’s R&D.

Within this time, the US government’s R&D spending exceeded the combined spending of all other countries, accounting for nearly 70% of global R&D spending. This enormous government expenditure laid a crucial foundation for US global leadership in science, and was also an important reason why the US could afford to take a laissez faire approach after the 1980s.

It was only after the 1980s that innovation and R&D led by the free market became the mainstream in the US technological sector.

In addition, the US government built a system to encourage students to study STEM subjects (science, technology, engineering, and math) and managed to reverse its passive position in its competition with the Soviet Union. This process was dubbed the “Sputnik effect”.

It was only after the 1980s that innovation and R&D led by the free market became the mainstream in the US technological sector. The Bayh-Dole Act, Stevenson-Wydler Technology Innovation Act, the Small Business Innovation Research Act, and other moves in the 1980s created a technological framework that helped to form a successful partnership between the federal government and private sector, and it was also from then on that profit-led private companies became the driver of technological innovation.

But it also needs to be emphasised that even when the US was lagging behind in the US-Japan competition over semiconductors during the 1980s, the US government also actively intervened. In 1987, it set up SEMATECH, a consortium of 14 US semiconductor companies. Over the following eight years, SEMATECH received US$870 million in DARPA funding, and made important contributions to the recovery of the US semiconductor industry in the 1990s.

Now, China and the US are in competition. Military and political jostling are short-term tussles and are unlikely to have a fundamentally decisive impact. If there must be a winner, this competition will be a long-term, comprehensive one, and technology will be the most important factor.

The crux lies in whether the US government will intervene, which seems likely, given the past experience and success of the US in planning and implementing technological strategy.

During the Trump era, there was already the National Strategy for Critical and Emerging Technology (October 2020), as well as more concrete strategies in technology, such as the Executive Order on Maintaining American Leadership in Artificial Intelligence (February 2019), National Quantum Initiative Act (December 2018), and the National Strategy To Secure 5G of the United States of America (March 2020).

With state intervention to set the strategy for technological development, how would the US political system and foreign policy change, and what difference would it make to China?

Will the US system look a lot more like China’s?

As mentioned above, US senators are introducing more and more bills, prompting the government through legislation to intervene and lead the development of the technology sector, especially technology advancements that have a major impact on the democratic system, including artificial intelligence and big data.

Some organisations and individuals in the US feel that there is a growing risk with having private companies take the lead in technological innovation. In order to regain the initiative, they advocate changing the path of technological innovation in the US, such that the state would set the strategy through comprehensive measures based on labour resources, infrastructure, investments, taxation, regulatory policies, and the general system.

In this sense, we might see another reversal of the US’s laissez faire approach to technological innovation. In order to compete with China, the US is creating political, military, and economic alliances, and it will also actively leverage its alliance network to drive technological development.

With state intervention to set the strategy for technological development, how would the US political system and foreign policy change, and what difference would it make to China? These are points to look at in future. After all, the US cannot overtake China by imitating it, just as Japan could not successfully compete with the US under the same capitalist system. And the fundamental reason why China has been able to rise and make a huge impact on the US is precisely because it works on a different system.

Related: Science & Tech: Can the ‘whole-of-nation’ approach save the US? | Post-pandemic 'Great Reset': Can the world pull it off with Big Tech and China in tow? | China’s strides in technology good for US and the world | Even as US-China competition intensifies, the world can look forward to a few good things

Technology
The Chinese government is wary of Tesla