Science & Tech: Can the ‘whole-of-nation’ approach save the US? 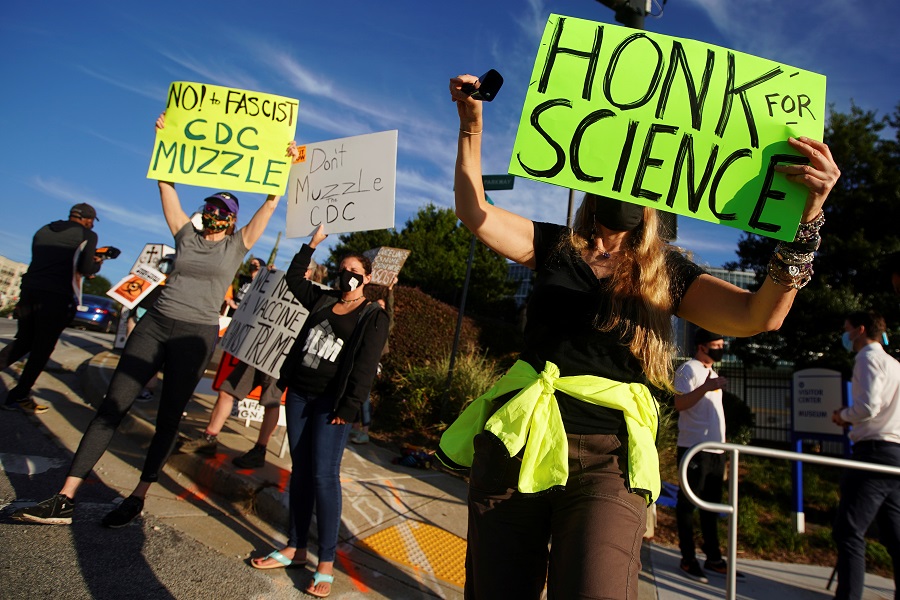 Protesters against US President Donald Trump rally outside the Centers for Disease Control and Prevention (CDC) in Atlanta, Georgia, US, 21 September 2020. (Elijah Nouvelage/Reuters)

Grace Chong - 30 January 2023
Amid ongoing tensions, a high-level visit by US Secretary of State Antony Blinken to China in the coming week shows hope for improved relations between the two economic powerhouses. Zaobao correspondent Yu Zeyuan notes that while the meeting may not produce practical results, it is a much needed exchange to manage and control China-US relations from worsening.
Read more
Translated by Grace Chong on 22 December 2020

“More Americans have died from Covid-19 than perished in four years of combat in World War II,” said a piece in The New York Times. The historic impact of the Covid-19 pandemic is evident and will greatly affect global developments in the next decade or more.

On the other hand, various governments have already granted emergency use authorisations (EUAs) for Pfizer’s Covid-19 vaccine, while Moderna’s Covid-19 vaccine has been found to be highly effective and has just been granted an EUA by the US Food and Drug Administration (USFDA). In the face of high infection rates expected in winter in the northern hemisphere, the light at the end of the tunnel is at least visible now.

It also suggests that science and technology, and the government’s role in advancing the field, is set to become increasingly important in modern society.

The role of government across countries was crucial in bringing about a new vaccine within a span of six months when it would have otherwise taken over a decade. For instance, long before an effective vaccine was developed, the US government poured a lot of money — placing large orders and bearing huge commercial risks — into encouraging businesses to establish large-scale production facilities as soon as possible. It also placed multiple bets, investing in various pharmaceutical firms to ensure that at least one or two of them would succeed in the end.

This example illustrates that when it comes to critical science and technology, the “whole-of-nation” approach in terms of national investment and resource mobilisation has unparalleled advantages. It also suggests that science and technology, and the government’s role in advancing the field, is set to become increasingly important in modern society.

In history, a similar whole-of-nation approach was the key to the US leading the world in science and technology in the latter half of the last century. The trigger was the Soviet Union’s successful launch of the earth's first artificial satellite in 1957 that shocked the Western world. The US government took swift action, establishing the National Aeronautics and Space Administration (NASA) as well as Advanced Research Projects Agency (ARPA), the predecessor of the Defence Advanced Research Projects Agency (DARPA) where the prototype of today’s internet was first established in the 1960s. In addition, the US Congress passed the National Defence Education Act, while funding for education and research in US universities increased nearly six times within a short span of seven years.

Apart from defence projects, the US also greatly improved basic scientific research. For example, the US Congress increased the budget allocation for the National Science Foundation (NSF) nearly four times between 1958 and 1959. By 1968, the NSF’s annual budget had again increased more than 3.7 times, amounting to US$500 billion.

Following reductions in government investment and a strong anti-intellectualism buttressed by white populism in recent years, the effectiveness and quality of the US’s once enviable technology organisations have fallen significantly.

Since the 1980s, the Austrian school of economics, which talks about the subjective value of goods and services, has gained ground in the US. Generations of Republican governments saw reducing government intervention in the economy as their mission. After multiple rounds of large-scale tax reductions, coupled with pressure from an ageing population, the federal budget outside of defence and health insurance was increasingly reduced, and expenditure on technology and education decreased accordingly. NASA’s budget cuts are a classic example of this.

Following reductions in government investment and a strong anti-intellectualism buttressed by white populism in recent years, the effectiveness and quality of the US’s once enviable technology organisations have fallen significantly. For example, the US’s Centers for Disease Control and Prevention (CDC) was once the model agency for disease prevention and control.

It is generally believed that the CDC’s use of faulty Covid-19 test kits in the early stages of the pandemic was the key reason why the pandemic spun out of control in the US. Also, the USFDA had also made a mistake in granting an EUA for chloroquine. The latter was later proven to be ineffective against Covid-19, and the authorisation had to be revoked.

To higher-level US elites, China’s threat is already similar to the one posed by the Soviet Union when it launched the first satellite.

From what I see, the current wave of anti-intellectualism in the US is pretty racist. Participants of any annual science and technology conference in the US would know that the proportion of non-white scientists among American scientific elites is on the rise. For example, Steve Bannon, former White House chief strategist in the Trump administration, openly complained that “two-thirds or three-quarters of the CEOs in Silicon Valley are from South Asia or from Asia”, while the Trump administration imposed stringent restrictions to limit H-1B visas.

Apart from China’s economic take-off, China has achieved great progress in technology as well. To higher-level US elites, China’s threat is already similar to the one posed by the Soviet Union when it launched the first satellite. Following Biden’s successful election, highly-educated elites would have the chance to make a comeback.

But under the pressure of a divided electorate and a huge national debt, whether the US can use the whole-of-nation approach of the 1960s to regain its prowess in science and technology advancements remains a question.

Related: China's whole-of-nation push for technological innovation | Chinese, American and European vaccines — will we have the luxury of choice? | Can a messed up world fight the pandemic together?