Post-pandemic 'Great Reset': Can the world pull it off with Big Tech and China in tow?

At last year’s WEF, Prince Charles and other leaders proposed the “Great Reset” — a global effort to rebuild the global economic structure. However, as appealing as this may sound, Hong Kong commentator Chip Tsao points out that the current slate of world leaders and international organisations are probably unable to rein in private juggernauts and get a handle on the Chinese wild card. 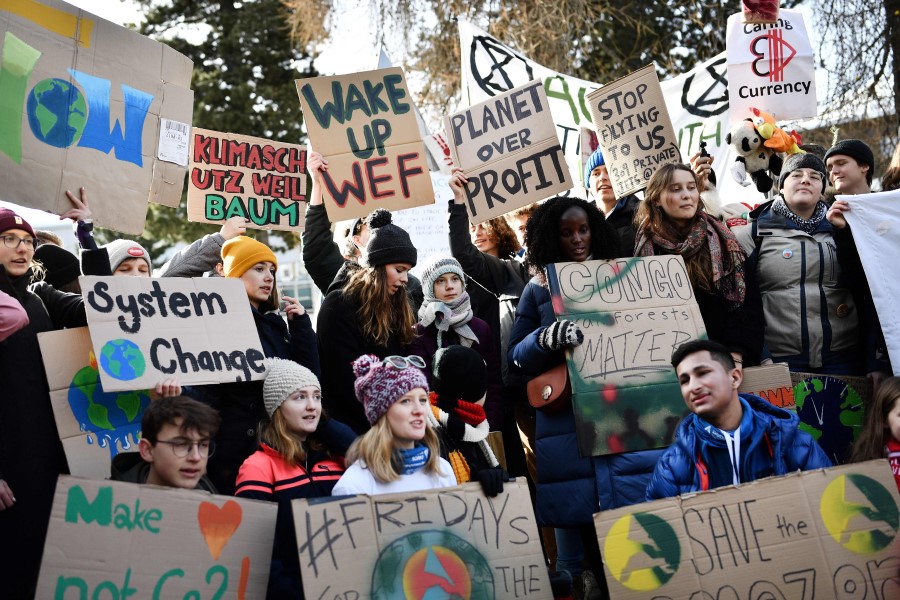 In this file photo taken on 24 January 2020, climate activists including Greta Thunberg (centre) march in a street of Davos on the sideline of the World Economic Forum (WEF) annual meeting. (Fabrice Coffrini/AFP)

Candice Chan - 20 September 2021
Even as the Chinese government tries to ease property prices, some local governments are worried that prices might fall too much, triggering social effects. As a stop-gap measure, they are rolling out regulations to “limit the drop”, frustrating those who are waiting to buy a house. Zaobao correspondent Yang Danxu looks at how the authorities plan to manage a property bubble that mustn’t burst.
Read more
Translated by Candice Chan on 25 January 2021

With the world ravaged by the coronavirus, there has been talk of “The Great Reset” after the pandemic, to unite the world in rebuilding the global economic structure. Australian Prime Minister Scott Morrison was the first to voice his objection, saying, “We don’t need to 'reset' our economic agenda, we just need to get on with it."

The Great Reset was first proposed at the World Economic Forum (WEF) by Prince Charles, who has always been concerned about environmental issues. He felt that after the global pandemic, all countries — especially in the West — should learn a lesson and rebuild a new order. Countries should work together in sectors such as technology, industry, and finance, starting with controlling carbon emissions, to come up with a new form of responsible capitalism that would safeguard the environment and produce stable growth in profits with sustainable development. And it should lead to a new industrial revolution.

In Prince Charles’ view, this new order has to be led by private enterprises in the West, instead of being driven by governments. This was the first point that sparked great debate.

Over the past century or so, since the two world wars, the world has gone through two political resets.

After World War I, the Austro-Hungarian Empire and the Ottoman Empire were no more. The era of classic imperialism was at an end, with various independent countries appearing in Europe, leaving the British and French empires clinging on for dear life. The world entered the modern era ruled by the finance and banking sector and the oil industry, and of the artistic renaissance of the Weimar republic. At the same time, it also resulted in the bloody revolution for Irish independence and marked the first time that the communists took office in the Soviet Union, constructing a utopian ideal that exerted a huge ideological pull on intellectuals in the West and in China.

This first reset was a failure, but a second reset quickly followed. Near the end of World War II, Churchill, Roosevelt, and Stalin met in Yalta, where they took out a figurative map and carved out Eastern and Western Europe. The Soviet Union wanted Italy and Greece, but Churchill said no, giving over Poland and Czechoslovakia instead. Just like that, the fate of tens of millions of people spanning three generations was decided by these three heavyweights in a few days over cigars and cigarettes. Then followed the establishment of the UN, and the post-WWII world took shape.

This reset brought the world into the nuclear era, where a balance of fear created the uneasy peace of the Cold War. But even on high alert, the Western world showed the creativity of democratic freedom in a capitalist system, resolutely fighting communism and eventually bringing about the collapse of the Berlin Wall in 1989. The world came face to face with the third reset, which was powered by the rise of the computer and internet age, and which impacted the arenas of politics, economics and technology.

And now Prince Charles has said the world needs yet another reset for a more equal distribution of the world’s economy and wealth.

This is easy enough to talk about. But how can it be done?

China has long started a global reorganisation according to its own interests and thinking. Even if the West starts its reorganisation efforts now, each side would have their own agenda, and never the twain would meet.

Prince Charles and the WEF believe that in the absence of powerful leaders like Roosevelt, Churchill, Reagan, and Thatcher to bring about a reset, private enterprises will have to take the lead. The problem is that private companies are not to be trusted. Wall Street and the US high-tech industry, including the social media empire of Twitter, Facebook and Amazon, have become a 21st-century monstrous ruling class of Western private enterprises.

Then there is China, which cannot truly work together with the West because its values and political system are completely at odds, so that there is a need for a reset to create a set of common global values. The reason is simple. China is only interested in creating a “community with a shared future for mankind” (人类命运共同体) as advocated by the Chinese Communist Party. It is now resetting half the world through its Belt and Road Initiative (BRI), from the Indian Ocean to Africa; the BRI is even expanding to Italy and Greece. China has long started a global reorganisation according to its own interests and thinking. Even if the West starts its reorganisation efforts now, each side would have their own agenda, and never the twain would meet.

Would China be allowed to participate? If so, how could the West trust it after the pandemic? And if China declines to participate, as the world’s factory and the world’s largest consumer market, how could any reset work without China’s cooperation, including carbon emissions?

The so-called reset is simply the same group of finance, economic, and intellectual elites of the WEF continuing to talk big about a new topic on a new platform. The international relations faculties in universities can start new courses and publish new theses, while intellectual elites expound endlessly on new academic theories and think about how to get into new government think tanks. But there will be no change in the global chaos.

The Great Reset would focus on rebuilding, leadership and governance, and management, to build a global system of responsible capitalism. But if this were driven by private enterprises, who would lead and govern? Who would do the managing? Mark Zuckerberg or Bill Gates? Would China be allowed to participate? If so, how could the West trust it after the pandemic? And if China declines to participate, as the world’s factory and the world’s largest consumer market, how could any reset work without China’s cooperation, including carbon emissions?

Companies in the West can do their part right now

Even without the WEF getting world leaders to sit down and talk, if ethical companies in the West are sincere, they can get to work right now. Twitter, Facebook, Google and other US companies can take the lead in declaring a stop to the mutual sale of big data, and an end to building a 1984-esque controlled society with a monopoly on private data. With this first step, post-pandemic capitalism would show some basic responsibility.

But would these data network consortiums be willing to do this? Biden’s inauguration would mean a comeback for these conglomerates. Would they be willing to give up the benefits of monopoly? No way.

The one who really wants a reset is in fact the one who lost the election — Trump. He advocated reviving domestic industrial production and rectifying China’s network invasion, and declared war on social media and mainstream media. His approach is brash, and being a businessman by profession, his ideas lack coherence. But deep inside he feels that the fourth industrial revolution is doing more harm than good in exacerbating the rich-poor divide, so that he has to take drastic action to change the current order.

How are the comparatively weak political and economic leaders of the US and Europe the likes of Biden, Kamala Harris, Justin Trudeau, and Angela Merkel going to rein in Zuckerberg, Twitter, and Amazon, with their billions in ammunition?

However, Trump’s reset touches on the fundamental interests of US elites. And now, even as the elites in the West are advocating a reset, there would not be any revolutionary new ideas; it would be nothing more than lip service from people who advocate a cause but do not really want anything to change.

Not to mention that the era of computers and the internet, with Steve Jobs, Bill Gates and Charles Kao — dozens of tech geniuses with some commercial savvy — and Apple smartphones thrown in, have changed people’s lives and EQs around the world forever. This was also another reset.

How are the comparatively weak political and economic leaders of the US and Europe the likes of Biden, Kamala Harris, Justin Trudeau, and Angela Merkel going to rein in Zuckerberg, Twitter, and Amazon, with their billions in ammunition? Should a place also be designated for Jack Ma? And why not bring in WHO head Tedros Ghebreyesus, an anemic UN, a WTO that allows China to ignore rules, and the Paris Climate Agreement. Would you be convinced that this motley subpar cast, with a bunch of familiar theorists, would be able to create a new global structure?

This article was first published in Chinese on CUP media as “後瘟疫 Great Reset 的新神話”.

Related: How China’s dual circulation strategy will affect the world economy | Even as US-China competition intensifies, the world can look forward to a few good things | China has entered the 'gilded cage' of RCEP and is considering the CPTPP. What's next?

Politics
Mainland China and Taiwan: The political hot potato of their CPTPP bids