Sadly, a Chinese pet owner in Shangrao, Jiangxi province, had the dubious honour of witnessing via pet monitor the culling of her Welsh corgi, right before her eyes. The perpetrators? Covid-19 community workers who have now given their peers a bad name. This is not just an issue of animal rights, Lorna Wei asserts, but also one of privacy and information disclosure, personal safety, and the abuse of power. 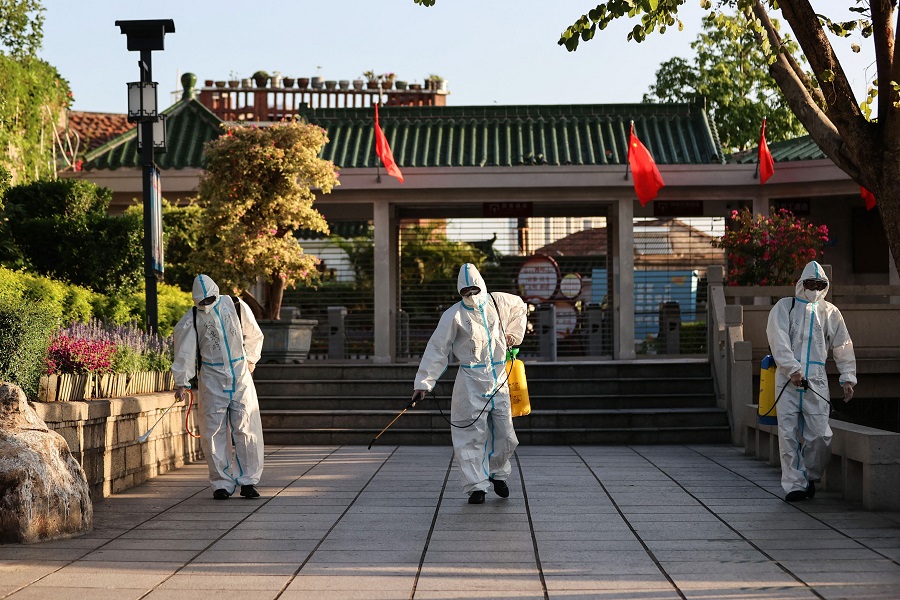 This photo taken on 6 October 2021 shows staff members spraying disinfectant at Gulangyu as the island prepares to reopen to tourists after being closed due to the outbreak of the Covid-19 coronavirus, in Xiamen, Fujian province, China. (STR/AFP)

Grace Chong - 10 August 2022
Academic Ngeow Chow Bing takes stock of the "one China" policy of Southeast Asian countries, noting changes in interpretations over the years and their subtle differences from China's "one China" principle and the US's "one China" policy. He warns that US House Speaker Nancy Pelosi’s visit to Taiwan has exacerbated cross-strait tensions and could further limit Taiwan's international space in Southeast Asia.
Read more
Translated by Grace Chong on 22 November 2021

“There are only two groups of people on Weibo, one who are the animal protectors, and the other who are feminists.”

These remarks came from a mysterious man, who claimed to be a nobody. Mr Nobody phoned Miss Qiu (pseudonym on Weibo) to delete her post on Weibo, on behalf of an ordinary Chinese citizen. Miss Qiu was shocked because she has never released her information on Weibo. When Mr Nobody phoned her and disclosed her personal details, she freaked out and recorded their phone conversation.

You may be feeling a little confused as I tell you about this heatedly discussed incident in China. Let me retell this story in chronological order. But I have to gently remind you first. You may feel shocked, speechless and even furious after hearing about what took place in Shangrao, Jiangxi province, especially if you have pets.

She watched the whole process while yelling at the workers to stop. The community workers just told her, “it’s an order from the leader, and your dog must be dealt with.”

On 12 November, Miss Qiu posted on Weibo, saying that Miss Sun’s dog was killed by community workers in Shangrao city. Miss Sun (pseudonym on Weibo) had to be quarantined because there were Covid-19 patients in her community. She readily cooperated with the community workers who assured her that her Welsh corgi would be fine at home. Miss Sun set off to the hotel for her quarantine. But when she turned on her pet monitor, she could not believe her eyes. Neither could the millions of viewers who watched the video clip.

I don’t want to recall the scenes I saw, and I regret that I watched Miss Sun’s video. But I have to tell you the content of this video, so you will understand why Chinese people are making a fuss about this event.

Two male community workers broke into Miss Sun’s apartment, without informing her in advance. And they beat Miss Sun’s corgi with iron sticks. At first, the little corgi was confused and did not dare to move. Then he tried to escape from the two men. Unfortunately, after numerous strikes on his head, the poor corgi could not make a sound, and was taken away by these two community workers in a yellow bag.

Miss Sun could not believe what happened. She watched the whole process while yelling at the workers to stop. The community workers just told her, “it’s an order from the leader, and your dog must be dealt with.” Miss Sun kept calling the so-called leaders, without receiving any response. So, she put up a post on Weibo and this was forwarded by Miss Qiu.

If you think that’s where the cruelty ends, you don’t know much about Shangrao city. After Miss Qiu sent the post on Weibo, she received a phone call from a man, a strange man who knew her personal information. Miss Qiu asked him why he knew her phone number. Mr Nobody just said, “My friend gave your number to me.”

Mr Nobody also implied that both animal protectors and feminists were evil forces from the West, who tried to corrupt the minds of Chinese women to fight against the Chinese government and to hinder their anti-epidemic work.

If the privacy issues here are not enough to make you freak out, wait till you hear what Mr Nobody said to Miss Qiu. Mr Nobody claimed that if Miss Qiu did not take down her post, she was either an animal protector, a feminist, or both. Mr Nobody also implied that both animal protectors and feminists were evil forces from the West, who tried to corrupt the minds of Chinese women to fight against the Chinese government and to hinder their anti-epidemic work. So, the prevailing object of women-blaming now has a proper new name: nation-threatening traitor.

Luckily, Miss Qiu refuted Mr Nobody’s accusations, and stated that she put up the post simply because she was an animal lover. Miss Qiu still kept her post, but Miss Sun was not that lucky. Somehow, just as Mr Nobody did, the leader of Miss Sun’s company asked her to delete the post. Otherwise, she would not need to return to her company after her quarantine. Miss Sun’s parents were also harassed by community workers. Under immense pressure, Miss Sun closed her Weibo account.

This saga seemed to come to an end on 13 November, but no one anticipated that it became the last straw for pet owners. Netizens were furious about what the community workers had done, and called them robbers and devils. At midnight on 13 November, the local government of Xinzhou district, Shangrao city issued a post, claiming that the community workers had apologised to Miss Sun.

However, most netizens do not buy the story of the Shangrao local government, and public indignation has spiralled out of control. Aside from ordinary citizens who continue to criticise the local government of Xinzhou district, official media have jumped in to show their disapproval of the inhuman act.

Many people are debating the rights of animals or pets, but this is not the key point of this incident. The two community workers broke into a citizen’s home without permission. Then they were so brazen as to dispose of her personal belongings, and even to slaughter her pet (it is said that all the pets in Miss Sun’s community were killed). Their robbery was condoned in the name of anti-epidemic work, and if the victims did not show forgiveness, people phoned the victims to delete their posts or to shut up, or “reminded” them that their jobs and the well-being of their parents or friends were at stake.

If my pets are killed at home, how can I feel safe?

Some pet owners are so frightened by this episode that they have declared that they will not be cooperating with anti-epidemic community work any longer. That’s the disastrous consequence of the Shangrao incident. The central government and ordinary citizens have spared no effort to contain Covid-19 in China, and achieved initial success. But public trust has been ruined overnight due to the Shangrao incident.

All the good examples in other cities, e.g. the Shanghai authorities, which allowed pet owners to take their pets with them to their quarantine destinations, and the volunteers in Shijiazhuang who helped to feed pets and domestic animals when the owners were in quarantine, have all been overshadowed by this inhuman Shangrao incident.

This act of cruelty is not only a matter of animal rights, but also a warning of the abuse of public power. If my pets are killed at home, how can I feel safe? Let’s wait for the final verdict on the Shangrao incident.