Asia's flashpoint is the disputed India-China border, not Taiwan Strait

While a lot of attention is currently on cross-strait relations and a possible hot war between Taiwan and mainland China, ISEAS academic Daljit Singh points out that the disputed India-China land border, more than the East or South China Sea, is the regional flashpoint that could flare up in the short term. 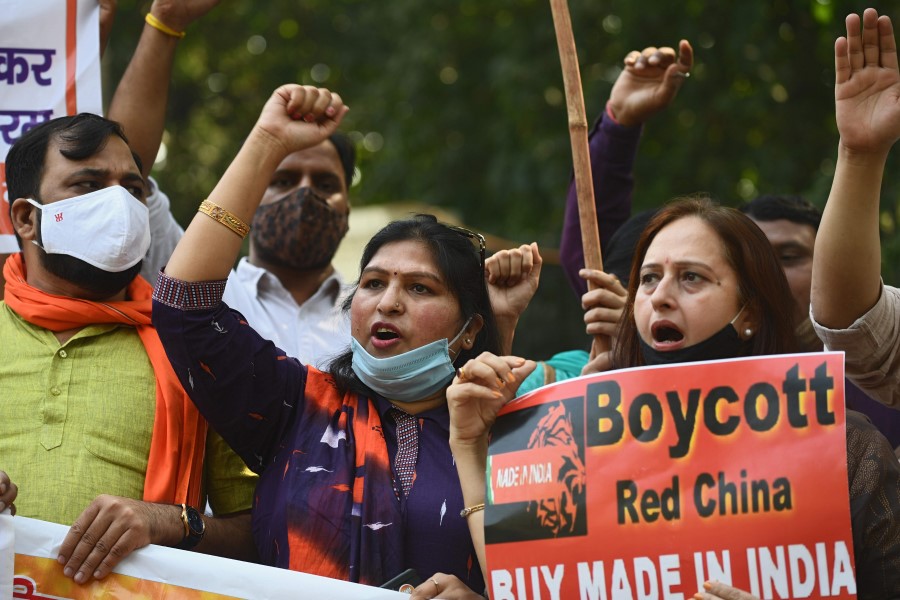 Demonstrators shout slogans as they take part in a protest march against China near the Chinese Embassy in New Delhi on 20 October 2020. (Sajjad Hussain/AFP)

Candice Chan - 5 August 2022
China's "Foundation Plan" for iron ore has gained much official support, and is aimed at reducing reliance on foreign sources of iron, including Africa and Australia. The only way to do this effectively is for China to ramp up mining of its own iron resources. However, these resources are scattered and difficult to access, and of lower grade. This means China has its work cut out if it is to succeed.
Read more
Translated by Candice Chan on 3 November 2020

Could the prospect of heightened political turbulence, even violence, during the US election campaign and its aftermath, tempt China to make a military push to seize territory, settle a score or gain strategic advantage in the Indo-Pacific region, as some pundits speculate?

For a number of reasons, this is unlikely. China will be very careful. First, it will not be sure that the US will not react vigorously even amidst political turmoil in Washington. US officials, led by Dr Henry Kissinger, did so effectively during the Yom Kippur War in 1973 in the midst of the Watergate crisis when President Nixon was barely able to govern the country.

China’s armed forces are much stronger than they were a decade ago, but they likely are not yet confident of taking on the US military.

At present there will be strong bipartisan support to resist China in the event of a move on Taiwan, against Japanese-administered land features in the East China Sea or even Philippine vessels or occupied islands in the South China Sea. Even if Trump loses the presidential election, his hawkish anti-China administration will remain in power into the second half of January 2021. China would not want to give them an excuse to lash out.

It is not in China’s interest to provoke the US into a military conflict at this juncture. China’s armed forces are much stronger than they were a decade ago, but they likely are not yet confident of taking on the US military. PLA military modernisation still has some way to go. Also, starting a fight which could involve the US would dash any hope of building bridges to a new US administration through offers of cooperation, in order to buy time for China to achieve technological resilience against US pressures.

Instead, China may desire a period of relative calm, even a more inward-looking phase, to consolidate the strategic and economic gains it has made abroad and to pay more attention to domestic economic problems caused by the Covid-19 pandemic and American economic pressures. The Chinese Communist Party (CCP), as a good Leninist party, is well-practised when to retreat a step or two to rebuild strength to advance later.

India could be an exception

There is one possible exception to this relatively benign short-term outlook — India.

China has no deep-seated animus against India of the kind it has with Japan and the current ruling party in Taiwan. However, its frustrations with New Delhi still must be considerable as bilateral relations between the only two billion-plus population countries continue to deteriorate.

India refused to sign on to China’s signature BRI project, has rapidly expanded military cooperation with the US, and is an active member of the four-nation Quad (Australia, India, Japan and the US), which China now sees as a budding alliance directed against it: never mind that these developments are responses to China’s own actions which have deepened insecurity in New Delhi. On the disputed India-China land border, New Delhi has taken a resolute stand against creeping PLA military encroachments, signalling to Beijing and the outside world that it will not be intimidated.

Apart from this conspicuous defiance from a country that is several notches below it in the international pecking order of states, Beijing may be concerned about the security of its sensitive soft underbelly of Tibet and Xinjiang in view of its proximity to the land border with India. With US-China strategic competition possibly heading towards a new Cold War, with growing India-US military cooperation, and the existence of a Tibetan government-in-exile as well as significant Tibetan communities in India, China may be becoming increasingly anxious about hostile external forces fomenting trouble among the ready reservoir of discontented Tibetans and Uighurs within China.

A military clash between India and China, if it occurs, would have significant effects on relations between the major powers of the Indo-Pacific region.

So, Beijing might be tempted to escalate border tensions with India to adjust territorial configurations to China’s advantage and to deflate somewhat India’s regional standing. Such an escalation would not risk the direct participation of US military forces on India’s side. The 1962 Chinese attack on India, whether by coincidence or not, occurred at the time of the Cuban missile crisis in October when American and international attention was riveted by that dangerous standoff.

A Chinese attack on Taiwan is very unlikely unless Taipei declares de jure independence, which it will not. But psychological warfare and other harassment short of triggering a full-scale conflict can be expected to continue. Nor would it seem to be in Beijing’s interest at this juncture to initiate conflict in the East or South China Sea. However, conflict on the India-China border looks more plausible, though far from inevitable. A military clash between India and China, if it occurs, would have significant effects on relations between the major powers of the Indo-Pacific region. Southeast Asia, which lies in the centre of the region, will not remain untouched by the ripples and currents that flow from it.

This article was first published as ISEAS Commentary 2020/174 "Will China Exploit America’s Domestic Distractions for Strategic Gains in Asia?" by Daljit Singh.

Related: China in the Gulf: India overmatched but undaunted | China has a long-term strategy in Southeast Asia. But what about India? | Containing China: US and India to sign third military agreement in ‘strategic embrace’ | The median line of the Taiwan Strait: No longer a boundary for mainland China | Chinese academic: A ‘reunification by force’ would be Taiwan's last | Why Taiwanese are pro-Japan but anti-China