As members of the 20th Politburo and its Standing Committee take the helm and usher in a new era of “China-style modernisation”, the market and public are showing clear signs of anxiety and dissatisfaction. Zaobao associate editor Han Yong Hong notes that the new leadership will have their work cut out for them to deliver the Chinese story well to its people and the outside world. 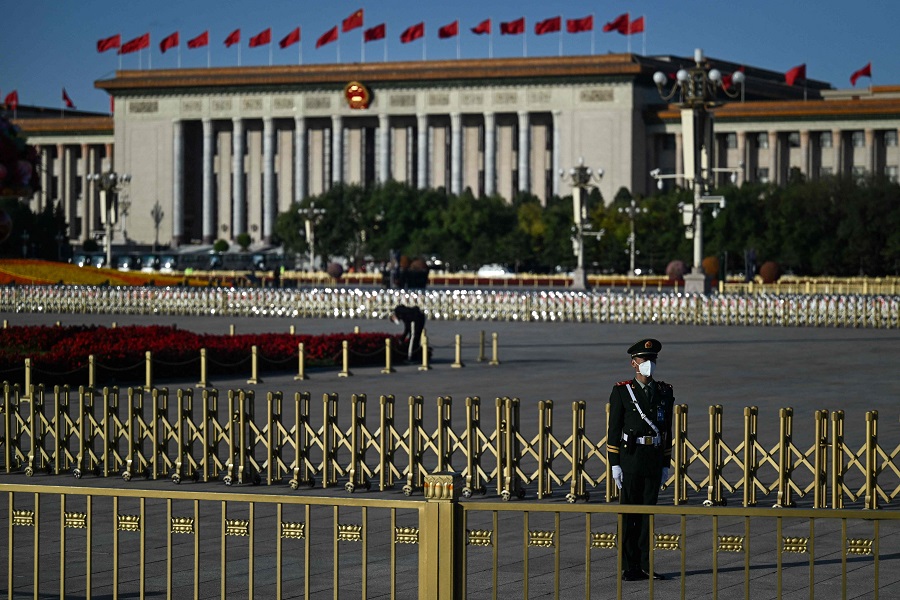 A member of the security staff keeps watch in front of the Great Hall of the People in Beijing, China, on 16 October 2022, ahead of the opening session of the 20th Party Congress. (Noel Celis/AFP)

Grace Chong - 30 January 2023
In the last of a six-part series on hiking in Hong Kong, cultural historian Cheng Pei-kai shares the wonders of Hong Kong’s hiking trails. As he rediscovers the hidden splendour of Ma On Shan on a difficult hike, he marvels at the ingenuity of the gods, keeping the pristine away from the evil world. Only the most determined will glimpse unparalleled beauty.
Read more
Translated by Grace Chong on 28 October 2022

Thereafter, the Chinese economy reported better-than-expected economic growth in the third quarter, and all four main Chinese financial regulators (People's Bank of China, China Banking and Insurance Regulatory Commission, China Securities Regulatory Commission, and State Administration of Foreign Exchange) released statements to reassure the market. Hong Kong stocks experienced a slight rebound in the last two days but tumbled again today as the buying spree faltered. On the other hand, the CSI300 Index has been on a downward trend since the middle of the year and has not recovered any lost ground as of 28 October.

The plunge in the stock market reflects the confusion, uncertainty and fear about China’s future after the new leadership team was unveiled, and these sentiments are shared by people inside and outside of China.

Investors are upset with the new lineup of the CCP’s top decision-making body. A Europe-based lawyer told the Japanese-owned Financial Times that he has already received instructions from three ultra-high net worth Chinese families to execute their “fire escape plans”, meaning to run abroad with their assets.

The plunge in the stock market reflects the confusion, uncertainty and fear about China’s future after the new leadership team was unveiled, and these sentiments are shared by people inside and outside of China.

Before the 20th Party Congress, some investors were hopeful for the easing of anti-Covid measures after the congress. But instead of seeing light at the end of the tunnel, it was reiterated at the congress that existing measures will be maintained — politics will continue to take precedence over the economy and the Chinese higher-ups will place greater emphasis on safety and control. Besides, China will push forward with "common prosperity", triggering worries among the rich about the security of their wealth. On the other hand, the intensifying ideological battle between China and the US is exacerbating decoupling risk. Indeed, the difference between expectations and reality is a bitter pill to swallow.

... none of the members of the new Politburo Standing Committee (PSC) has administrative experience in the central government, and none of the Politburo members has experience leading the State Council.

Shanghai party secretary Li Qiang, who does not have work experience in the central government, rose to the second-ranked spot, while cadres from the Youth League faction have all been removed from the Politburo. Indeed, the leadership team would be intensely loyal, but the risk of policy mistakes is also magnified, as it now lacks diversity and the checks and balances of power.

If the stock market reflects the judgement and sentiment of investors, then the sensationalised news of former Chinese President Hu Jintao’s sudden exit during the closing ceremony of the 20th Party Congress on 22 October has become an outlet for various parties to vent their frustrations.

International media and online platforms have fervently analysed the footage of Hu’s exit and paired it with captions, subtitles and commentaries, presenting some frenzied discussions which are rarely made on a piece of political party-related news, while making increasingly bizarre claims.

... if there were really conflicts at the top that cannot be hidden, couldn’t the CCP prevent inadvertent shows of discord in front of the media, given the party’s strict controls?

Generally speaking, regardless of whether they hold a positive view or otherwise of the CCP, commentators and academics think that there is no need for a political interpretation of Hu’s exit. Firstly, an extended video showing what transpired before Hu was escorted out reveals that he had had a close talk with Xi. Furthermore, despite appearing reluctant to go, Hu acknowledged both Xi and outgoing Chinese Premier Li Keqiang respectively before leaving, which shows that their relationships were sound.

Secondly, the voting for the Central Committee had already ended that morning. It is unlikely that Hu, who was present and gave his vote, did not see the name list and only knew of the final appointments at that point. More importantly, if there were really conflicts at the top that cannot be hidden, couldn’t the CCP prevent inadvertent shows of discord in front of the media, given the party’s strict controls?

It is not hard to arrive at such conclusions. However, amid the snowballing online comments, rational and detached voices appeared weak and feeble. Of course, this is partly due to the fact that the state media has not yet given a thorough public account of the incident. The ongoing scrutiny of the incident also reflects the people’s need for an avenue to vent their dissatisfaction. One commentator described the reaction to the incident as taking a moral stand.

Can a “China-style modernisation” match their understanding and meet their demands?

Meeting the public’s expectations and demands

Many Chinese feel shocked and angered over the past few days, and this public sentiment is growing. In fact, people’s hearts and minds are becoming more unstable after the congress. One Chinese wryly said that China’s future is now more certain than ever — more certain that there is no hope. Such reactions are probably beyond the expectations of the Chinese authorities, which shows their lack of awareness and foreknowledge of the outside world, and the clear disconnect between the authorities' perception and the public’s values.

This disconnect does not just exist between China and the rest of the world, but also between the authorities and the Chinese elites, and even the common folk. The Chinese society and its people have opened their minds over the years — the elites and common folk have their own understanding of what a civilised society should be, which might be closer to Western societies. The people also have certain demands for freedom of speech and personal safety. Can a "China-style modernisation" match their understanding and meet their demands? Exploration and time will answer that.

It is reasonable for the CCP to want to lead China on its own path of development, but this is no easy feat. Proceeding carefully and maintaining external confidence are important for China’s continued growth. As the second largest economy in the world, it also has a responsibility to provide a stable outlook for the rest of the world.

Following the 20th Party Congress, Beijing is suddenly facing a huge deficit of trust. The new CCP leadership will have their plate full with its set goals and tasks, including moving out of its current isolation from the rest of the world and reviving the economy. Its top priority now is to restore trust and confidence.

Among the newly appointed PSC members, secretariat member Cai Qi will be in charge of party affairs and ideology, while Politburo member Li Shulei has been confirmed as propaganda chief. They have an important role to play in “telling the China story well”. Hopefully, they have more innovative ideas to deliver a relatable narrative within and outside of China, and not let maintaining hope in China become an onerous task amid the more complex challenges of the “new era”.

This article was first published in Lianhe Zaobao as “北京面临巨大信任赤字问题”.