For better or worse: China's dash towards post-Covid normalcy

The ill-prepared nature of China’s opening up has led to a sudden rise in infections. While major cities such as Beijing and Shanghai have seemingly traversed this peak and are showing signs of economic recovery, China as a whole still has some ways to go, especially in addressing the people’s needs. Zaobao associate editor Han Yong Hong tells us more. 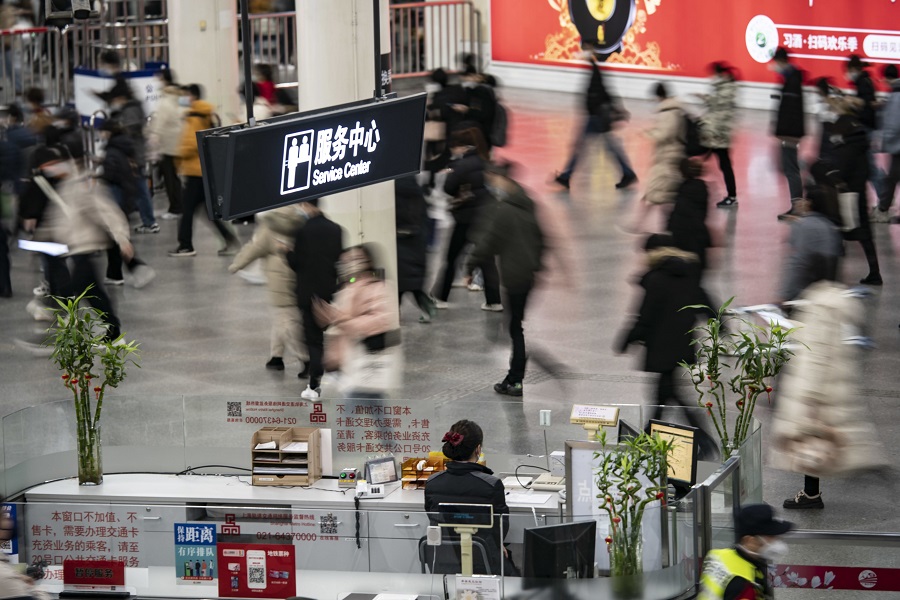 Commuters at a subway station in Shanghai, China, on 3 January 2023. (Qilai Shen/Bloomberg)

Grace Chong - 30 January 2023
Amid ongoing tensions, a high-level visit by US Secretary of State Antony Blinken to China in the coming week shows hope for improved relations between the two economic powerhouses. Zaobao correspondent Yu Zeyuan notes that while the meeting may not produce practical results, it is a much needed exchange to manage and control China-US relations from worsening.
Read more
Translated by Grace Chong on 6 January 2023

In mid-December last year, seeing that the Chinese goverment had made a U-turn on its Covid policy and people were swiftly getting infected in various cities, a businessman friend of mine boldly invested in a large amount of Chinese concept stocks. His shrewd eye and quick move earned him a windfall, and the stocks he picked up are still doing well.

His story is not unique. On 4 January, US-listed Chinese concept stocks started off the new year with a bang, with the NASDAQ Golden Dragon China Index experiencing its best start to a calendar year since its inception, a clear indication of the rising optimism about the prospects of Chinese enterprises.

Back in full force

The surge in Chinese stocks could be explained by numerous factors, including Ant Group’s approved fundraising plan, and the Chinese higher-ups’ recent policy signals to loosen the regulations of the tech and real estate sectors. However, China’s exit from its zero-Covid policy is clearly an important factor.

The speed with which the Chinese government abandoned its zero-Covid policy is mind-boggling and has had greatest effect in highlighting the government’s pledge to revive consumption and the economy in the new year. It’s “for real” this time, and the result is also a real confidence booster.

A political observer told me, “Who said that the Chinese government only cares about politics and ideology, and not the economy? Look at Beijing now!”

To local and foreign observers and investors, the traffic on the ring roads in the city centre of Beijing is a visual testament to China’s rapid exit from zero Covid, plastered with the keywords: “Rapid return to normal life”.

Friends working at foreign enterprises in China joked that around 13 December last year, over 90% of employees at their Beijing and Shanghai offices tested positive for Covid-19, but all have recovered and promptly returned to work two weeks later.

The “coronavirus” is no longer the top search on Baidu. At New Year's Eve countdown parties in major cities such as Wuhan, Nanjing and Shijiazhuang, the large spectacle of crowds gathering with a vengeance was a shock to many.

Meanwhile, characters from Jin Yong’s martial arts novels including Yang Guo (杨过), Yang Kang (杨康) and Zhang Wuji (张无忌) would all work in the “netherworld”. These names are used to refer to people who have tested positive previously (Yang Guo, 阳过), already recovered from Covid-19 (Yang Kang, 阳康), or who have never been tested positive for Covid-19 and are invincible.

These jokes indirectly reflect that, after three years of strict lockdowns and anti-Covid measures, the Chinese are coexisting with the virus in an instant, and are probably more entrenched in living with the virus compared with some other countries.

... the outbreak’s peak may come and pass sooner than expected.

A friend lamented, “Covid-19 measures were suddenly lifted and everyone got infected. And then in the blink of an eye, everything passed. It may not be that bad after all…”

Indeed, his statement makes sense. Many analysts had previously predicted that China could overcome the infection peak in the first quarter of 2023 at the earliest, and its economy would rebound by the second quarter. But based on the astonishing “China speed” of the urban population’s infection rate — 80% to 90% of the population got infected within a few weeks — the outbreak’s peak may come and pass sooner than expected.

Some enterprises are already planning for China’s post-pandemic era, when economic growth is said to reach 5% for 2023 and 6% in the fourth quarter, in stark contrast with the recession in Europe and the US.

Unfortunately, with the outbreak so quick and aggressive, it will not just pass “in the blink of an eye” for everyone. Those who are strong and in their prime can recover after some discomfort, but some elderly, middle-aged and even younger people may not make it through this winter. Indeed, there have been many reports on the squeeze on healthcare resources and overwhelmed funeral services in China, and I will not belabour the point here.

It is indeed a combination of contradictions in China right now.

We are seeing a flurry of juxtapositions, such as the “revenge” countdown celebrations with masses of people congregating amid the misery from the squeeze on hospitals and funeral parlours; urbanites celebrating on the streets but the rural people remaining anxious; and stock market winners among the many more who are shocked at the hasty reopening amid the lack of preparation by the authorities. It is indeed a combination of contradictions in China right now.

Frankly, “quickly getting past the peak” is a risky move. Rescuing the economy would mean rescuing livelihoods, and one can be sure that the new leadership from the 20th Party Congress would be bold enough to weigh up the priorities, or understand that it is a dangerous move that they have no choice but to make.

Due to the lack of objective data and bases of comparison, it will be difficult to objectively assess if the death rate is much higher than expected. However, looking at public opinion, large cities such as Beijing and Shanghai seem to have overcome that major hurdle.

If the virus changes in the next few months, there is a serious risk that the political manoeuvring and confrontational climate of 2020 will reemerge, when the West was calling it the “China virus”.

At the same time, it is clear that the Chinese government’s credibility has taken a severe hit. After three years, China is eventually moving towards living with the virus, just like other countries. The authorities were obviously ill-prepared at the start, especially with opening up happening during winter, when the flu spreads most easily. The people were basically putting their lives and health at risk. However, no mutations of the Omicron variant have been found in China so far — is that just a stroke of luck?

If the virus changes in the next few months, there is a serious risk that the political manoeuvring and confrontational climate of 2020 will reemerge, when the West was calling it the “China virus”. Many countries have already tightened border controls for travellers from China, and if China does not release its Covid-19 infection figures and a mutation of the virus occurs, other countries will be even more justified in their criticisms and accusations of China.

On 31 December, Chinese President Xi Jinping said in his New Year address that “it has not been an easy journey for anyone… tough challenges remain… Ours is a big country. It is only natural for different people to have different concerns or hold different views on the same issue. What matters is that we build consensus through communication and consultation.” This could be considered an indirect admission that the people have suffered.

... policy changes are always sudden and not subject to individual will.

Perhaps in the second quarter, when China has made it across this hurdle, the public will forget and leave the past behind, just as they have done before. Another possibility is that people will become more clear-headed and see that in this reality, policy changes are always sudden and not subject to individual will.

Whether in lockdown or quickly getting past the peak, each individual is tied to 1.4 billion people, and can only pray for the well-being of themselves and their loved ones, in this choiceless reality of contradictions.

This article was first published in Lianhe Zaobao as “中国让疫情“快速过峰”的善与恶”.

Related: How China bolted from zero Covid towards herd immunity | China prepares for Covid peaks in January | Will mainland China see a 'tsunami' of Covid cases? | Is China ill-prepared for a surge in Covid cases? | Unease amid celebration: New year, old Covid worries in China