Lee Huay Leng was touched by the live broadcast of a concert in the park put up by the Nuremberg Symphony Orchestra with Singaporean conductor Wong Kah Chun at the helm and Singapore Chinese Orchestra musicians taking part. Chinese instruments found their place in Wong’s arrangement of 19th century Russian composer Modest Mussorgsky’s “Pictures at an Exhibition”. In the aftermath of Covid and an international milieu where politics meddles even in the arts, the young Wong had found a way to stay composed and build a bridge with music. Can countries learn to do the same? 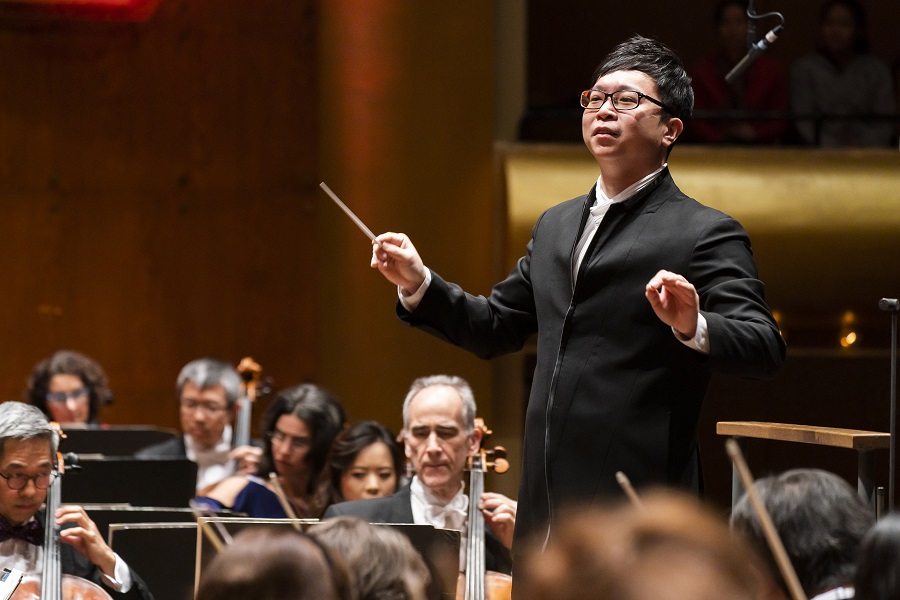 Grace Chong - 30 January 2023
In the last of a six-part series on hiking in Hong Kong, cultural historian Cheng Pei-kai shares the wonders of Hong Kong’s hiking trails. As he rediscovers the hidden splendour of Ma On Shan on a difficult hike, he marvels at the ingenuity of the gods, keeping the pristine away from the evil world. Only the most determined will glimpse unparalleled beauty.
Read more
Translated by Grace Chong on 23 August 2022

On 7 August, a push notification from Lianhe Zaobao led me to a video of five Singapore Chinese Orchestra (SCO) musicians performing with the Nuremberg Symphony Orchestra in Nuremberg as part of the Klassik Open Air annual series of concerts. Under the baton of young Singaporean conductor Wong Kah Chun and to a live audience of over 70,000 and thousands more online, the musicians played “Pictures at an Exhibition” by 19th century Russian composer Modest Mussorgsky, which was orchestrated by Wong into a sinfonia concertante for Chinese instruments and Chinese orchestra.

This was the world premiere of Wong’s adaptation of the piece and also his last performance as chief conductor of the Nuremberg Symphony Orchestra. He introduced the SCO quintet at the start — percussionist Benjamin Boo, Lee Jun Cheng on dizi, Ma Huan on yangqin, Tan Manman on huqin and Zhang Yin on pipa. The crowds in the park listened intently; the camera zoomed in on the SCO musicians a few times  — they were certainly not there to play second fiddle. That balmy summer night, as beautiful melodies filled the air, different musical sounds were melded together in a gentle confluence of cultures.

This was just after US House Speaker Nancy Pelosi’s visit to Taiwan and the Chinese People’s Liberation Army’s ensuing military exercises encircling Taiwan. In fact, the international environment in the past two to three years has been more hostile and laden with conflict than they were friendly and harmonious. Against this backdrop, it would have been almost impossible for a Chinese orchestra to make an appearance and play with symphony orchestras of European cities. But this time, it was a young Singaporean conductor who brought a Chinese orchestra to the Western music scene.

In an interview, Wong said in German-accented English, “It’s an annual event where audiences from all around come together in the park…it’s very inclusive, very democratic, and of course it’s a free event that’s open for anyone…” He added that music transcends borders in many ways. In his orchestration of Mussorsky’s “Pictures at an Exhibition” for instance, instead of thinking of musical sounds as belonging to one nationality, he hopes to bring out the uniqueness of the instruments and show the inclusivity of music. “I have no problem blending the different instruments,” he said.

In 2016, Wong won the first prize at the 5th Gustav Mahler Conducting Competition, becoming the first Asian conductor to win the triennial competition. That win at the young age of 29 was a huge honour and accolade for Wong, and spurred him on to achieve greater heights on the international stage. He later conducted the China Philharmonic, Shanghai Symphony and New York Philharmonic orchestras. He also became the chief conductor of the Nuremberg Symphony Orchestra. Prime Minister Lee Hsien Loong had highlighted Wong’s success story in his 2018 National Day Rally speech and in 2019, Wong was conferred the Order of Merit of the Federal Republic of Germany by German President Frank-Walter Steinmeier.

But his bright future was tested when the Covid-19 pandemic hit in early 2020.

... to his dismay, the owner who used to be friendly to him and even attended one of his concerts screamed at him and asked him to leave because of the “Wuhan virus” and his yellow skin.

The uglier side of humanity during the pandemic

The pandemic dealt a severe blow to various industries, including orchestras. As Wong’s concert tour in Europe was halted, he came back to Singapore and his home in Jurong in March 2020, staying put for six months. At that time, Europe was badly affected by the pandemic and all performances were cancelled. Without concerts, artists are like hawkers who can’t open for business — they lose their livelihoods.

In some ways, the recurrent Covid-19 outbreaks have given young artists the valuable experience of “experiencing life” in a practical way. Later when concerts resumed in some European cities, Wong was asked to go back for some performances. Risking infection, Wong got on a plane, took PCR tests and did his quarantine, only to learn that the events were cancelled at the last minute and he would have to bear all the expenses himself.

When he returned to a European city he was very familiar with, he went to the bakery he used to frequent. But to his dismay, the owner who used to be friendly to him and even attended one of his concerts screamed at him and asked him to leave because of the “Wuhan virus” and his yellow skin. Not only that, when Wong conducted performances in some cities, musicians would sometimes give him a hard time although he complied with the respective measures and talked to them while wearing a mask. And when some media reported on his concerts, they would specifically mention his Chinese race and not his performance as a conductor.

Are music and the arts truly without borders? What’s the relationship between politics and the arts and music?

Against the backdrop of off-and-on Covid-19 outbreaks, artists coped with the tightening and loosening of anti-Covid measures in various cities. When February came, apart from Russia’s invasion of Ukraine, Russian conductor Valery Gergiev was fired from his position as chief conductor of Munich Philharmonic and dropped by several other European symphony orchestras because he did not condemn Russian President Vladimir Putin’s actions. The influence of international politics over music must also have taught Wong some lessons. Are music and the arts truly without borders? What’s the relationship between politics and the arts and music? These questions provide much food for thought.

For musicians aspiring to become world-class conductors, it may seem that someone in his thirties still has a lot of time. But for young musicians with great potential, time is of the essence. If Wong misses this golden time, the career of a conductor hoping to be among the world’s best could certainly be impacted.

Wong wanted to break barriers through music but he was not rash in doing so and also understood the political sensitivities involved.

Letting music do the healing

However, Wong faced the challenges before him with composure and did not try to hide his Chinese identity at the risk of facing discrimination in Europe. Finding themselves caught in a specific historical context, how musicians accept the situation at hand and learn to reflect, accumulate experience and improve, is more meaningful than rushing to make a name for themselves.

When Wong was back in Singapore, apart from conducting performances and studying, he continued to introduce children from low-income families to classical music and gave them lessons. In addition, he attended online lessons and focused on learning about Chinese orchestras and Chinese instruments. It was also during such a unique time that he orchestrated the said version of “Pictures at an Exhibition”.

Wong stood confidently on the stage in a foreign country, staying calm and collected. From a certain perspective, isn’t this also a position and stance that Singapore can hold on the international stage?

As I watched the video of the concert in Nuremberg, I was incredibly moved when the orchestra started playing. Wong wanted to break barriers through music but he was not rash in doing so and also understood the political sensitivities involved. He only hoped that the German audience would be open and enjoy the musical feast without reading too much into it.

Wong stood confidently on the stage in a foreign country, staying calm and collected. From a certain perspective, isn’t this also a position and stance that Singapore can hold on the international stage?

Wong told me later that one must be willing to work hard and acquire much knowledge to successfully blend music together, so that it would not be a superficial attempt or simply a mish-mash of musical notes. To truly understand and integrate different music, it is necessary to include one’s own insights and experiences.

In a change of scene on 20 August, Wong will be back on home ground, leading the SCO as it performs his version of Mussorgsky’s “Pictures at an Exhibition” at the SCO Concert Hall. Incidentally, Mussorgsky’s “Pictures at an Exhibition” is a suite of ten piano pieces inspired by an exhibition of paintings and watercolours created by his friend Victor Hartmann during the latter’s Europe travels. The tenth movement in this piano suite depicts the Bogatyr Gates in the capital in Kiev through music.

I’m looking forward to Wong’s performance with the SCO tonight and also the day when he conducts a performance of this piece in China.

*This article was published in Lianhe Zaobao on 20 August.

Related: Challenges of Singapore's Chinese community amid competing influences: Lessons from an old bookstore | Walking a tightrope to survive: Singapore's position in the Russia-Ukraine war and beyond | Trees in a forest: Becoming Chinese Singaporean in multicultural Singapore