21 Jan 2022
By Jay L. Batongbacal
Professor, College of Law, University of the Philippines

The winner of the 2022 Philippines presidential elections will determine how the Philippines will handle its legally recognised claims in the West Philippine Sea both domestically and in the regional arena. While current President Rodrigo Duterte has gone against public sentiment several times with his relatively friendly stance towards China, his successor will have to decide how to handle Chinese maritime actions that put pressure on smaller neighbours in Southeast Asia. 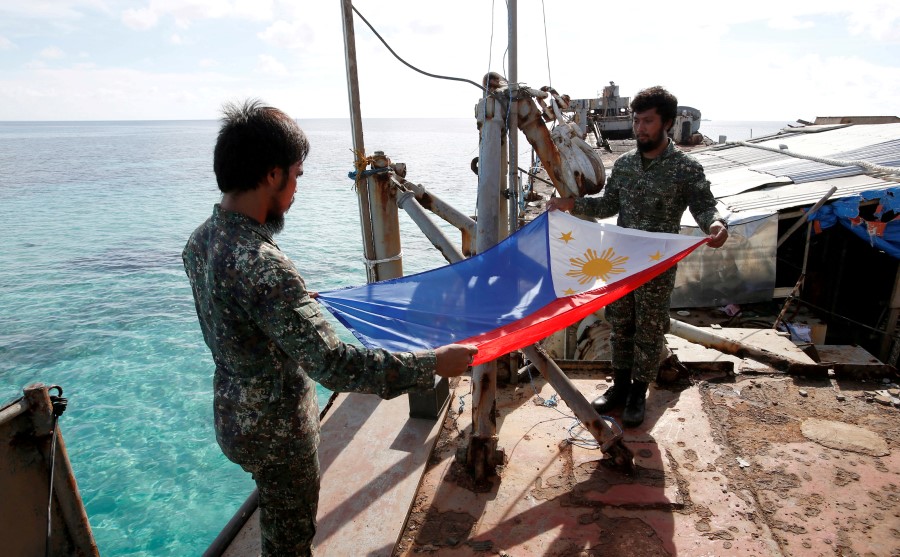 Philippine Marines fold a Philippine national flag during a flag retreat at the BRP Sierra Madre, a marooned transport ship in the disputed Second Thomas Shoal, part of the Spratly Islands in the South China Sea, 29 March 2014. (Erik De Castro/Reuters)

Candice Chan - 13 May 2022
With Ferdinand Marcos Jr achieving a landslide win in the Philippine presidential election, how will the Philippines’ China policy change? In particular, given the legacy of the Marcos family’s good relations with China as well as former President Duterte’s pro-China stance, how will the incoming president handle relations with the US?
Read more
Translated by Candice Chan on 20 January 2022

The Philippine presidential elections are coming up in May 2022, and the stakes are high when it comes to determining the outlook for the Philippines-China maritime and territorial disputes.

After spending most of its term exhibiting public accommodation, fatalism, and solicitous clientelism, the outgoing Duterte administration shifted gears since late 2020 to take a more forward-leaning public posture against China.

Despite his perceived pivot to China, Duterte rhetorically raised the South China Sea Arbitration Award in two successive speeches at the UN.

His government’s formerly silent National Task Force on the West Philippine Sea (NTF-WPS) became a noticeable voice when more than 220 Chinese maritime militia vessels were discovered anchoring for extended periods at Whitsun Reef, in the area of the Philippine-claimed Kalayaan Island Group in March 2021.

The latest incident saw the NTF-WPS denouncing the China Coast Guard’s interference with a Philippine resupply mission to Second Thomas Shoal in early November 2020. It characterised China’s actions as potentially “hostile” as the use of water cannon damaged one of the Philippines’ vessels.

Years of Duterte’s constant sales pitches for China only resulted in public opinion trending increasingly against him.

The shift in posture may have been precipitated by the growing awareness in the Duterte administration that its cordial stance with China failed to extract significant concessions. This is seen as a major source of dissatisfaction among Filipinos that could be harnessed to sway voting decisions.

Indeed, periodic surveys have shown that year after year, the public increasingly supported a stronger stance on West Philippine Sea issues. Public opinion has consistently supported the assertion of the Arbitration Award, the modernisation of the Armed Forces, and full implementation of the military alliance with the US to protect the country’s interests in the disputed sea.

These three issues frame voters’ perceptions and preferences about the West Philippine Sea. Years of Duterte’s constant sales pitches for China only resulted in public opinion trending increasingly against him.

The stakes are indeed high, even if Duterte himself publicly shows a shocking lack of concern for the importance of the West Philippine Sea in terms of environment, food security, and regional stability, and persists in defeatism in national defence.

His perfunctory and unenthusiastic delivery of his speeches criticising China’s recent actions betrays his personal preference to go against the grain of the nation’s legal position in maritime and territorial disputes.

In the last months of his term, the Duterte administration has found itself adrift and unable to exert influence over the choice of the next president. In a surprise turn of events, he was unable to set up his preferred successor, and his administration currently has no standard-bearer.

He [Ferdinand Marcos Jr] has parroted Duterte’s favourite opening argument that the Philippines will lose any war with China to frame future engagement with China, and additionally even questioned the necessity of modernising the military.

From his initial statements, Marcos Jr appears to be prepared to repeat Duterte’s mistakes and may even be more fatalistic and defeatist than Duterte. He has parroted Duterte’s favourite opening argument that the Philippines will lose any war with China to frame future engagement with China, and additionally even questioned the necessity of modernising the military.

China’s ambassador to the Philippines cast a spotlight on his family’s relationship with China as if signalling the future direction of his foreign policy. Given his lacklustre past performance as a senator, there is yet no indication that he will at least reflect some measure of his late father’s competence and judiciousness in managing foreign relations.

In contrast, all the other candidates have indicated that they will deal with China at arm’s length, though in different degrees.

Robredo and Lacson have advocated a more sanguine and coherent approach, leaving the door open to diplomatic engagement but in a less accommodating fashion regarding rights and entitlements in the West Philippine Sea.

Pacquiao and Moreno seem to be similarly inclined, though they have couched their statements in generalities only to the extent necessary to differ from Duterte’s submissiveness.

Should Robredo or any of the other candidates win, it is possible for the Philippines to take a different direction, though it will be admittedly fraught with difficulties on account of the impact of Duterte’s pivot to China.

The trajectory of the West Philippine Sea disputes will be determined by the policy choices and personal preferences of the next president on three areas: what to do with Philippine maritime rights and entitlements, how to treat the Philippines-US military alliance, and what directions to drive the South China Sea discussions within ASEAN.

Should Marcos Jr win, the odds are that he will continue Duterte’s policy of accommodation, and possibly backpedal on military modernisation. These will likely lead to a rudderless South China Sea policy within ASEAN, echoing the first few years of the Duterte administration, which squandered the opportunities presented by the Arbitration Award in 2016.

Should Robredo or any of the other candidates win, it is possible for the Philippines to take a different direction, though it will be admittedly fraught with difficulties on account of the impact of Duterte’s pivot to China.

It is clear, however, that there will be a preference toward asserting the Arbitration Award, improving and enhancing the Philippines-US alliance, and advocating a more coherent ASEAN posture on the South China Sea.

It could mark a return to a more conventional, pre-Duterte mode of engagement, though less confrontational and more cautious in light of the more complex geopolitical environment that the region is now enveloped in.

Thus, the next election will be pivotal for the West Philippine Sea disputes. In the next few years, China will continue to ramp up its grey zone operations in the South China Sea, deploying its military, law enforcement, and maritime militia assets continuously and persistently within the exclusive economic zones (EEZs) of the smaller Southeast Asian states.

China’s pressure on Indonesian and Malaysian continental shelf exploitation last year demonstrates its broader strategy of incrementally increasing the presence and control of all maritime activities in the hotly contested region. In the background, it is continuing to increase its military might to ensure dominance over small countries and to challenge external powers like the US, Japan, Australia, the EU, and others.

From its now constant maritime activities, China will likely expand into the aerospace domains, with its three large military bases in the South China Sea serving as the ideal forward operating bases for Chinese power projection over the Southeast Asian region.

Another six years of the same kind of policies could only push Philippine interests down the abyss, which will have negative consequences on the region’s posture and dynamics in the South China Sea disputes overall.

In its six years in office, the outgoing Duterte administration opened the West Philippine Sea to Chinese incursions, seriously challenged the resilience and reliability of the Philippines-US military alliance, and refrained from maximising its options within ASEAN to pursue its interests in these disputes.

Another six years of the same kind of policies could only push Philippine interests down the abyss, which will have negative consequences on the region’s posture and dynamics in the South China Sea disputes overall. One can only hope that the Philippines does not make the wrong choice in its next presidential election.

Related: [South China Sea] Should the Philippines avoid playing the lead role amid rising tensions in SCS? | While preserving good relations with China, the Philippines must exercise its maritime rights | China's CPC deepens ties with Philippine political parties | Second Thomas ShoaI: Is China bullying its smaller neighbours in the South China Sea? | Philippine-US cooperation on Whitsun Reef: A 'win' for the Biden team in Southeast Asia?