Chewing gum on the sole of China's shoes? Australia-China relations take a nosedive

06 May 2020
By Zhu Ying
Professor of Economics, Shanghai Normal University

China's Global Times editor Hu Xijin called Australia the “chewing gum stuck on the sole of China’s shoes”. The Chinese public seems to agree and wants to “find a stone to rub it off”. This is but a sampling of Chinese reactions to recent statements by Australian leaders. That Australia's calls for China to be part of a Covid-19 independent international inquiry strike a strident tone is not unexpected, given that negative attitudes towards China have been simmering in Australia for quite a while now. 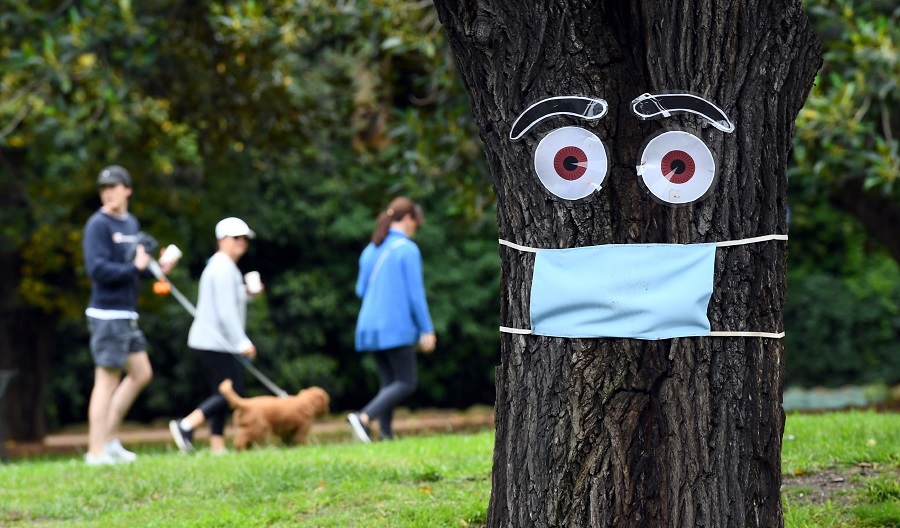 People walk past a tree with a mask and eyes stapled on it, in Melbourne, on 20 April 2020. (William West/AFP)

Grace Chong - 1 July 2022
Masayoshi Son, billionaire head of SoftBank Group Corp. may finally be able to push ahead with launching a US IPO for semiconductor and software design giant Arm Ltd., after wresting control of Arm China back from ousted CEO Allen Wu. It was no mean feat and a saga of twists and turns. But even now, some questions of Arm China’s shareholding and business remain unanswered.
Read more
Translated by Grace Chong on 6 May 2020

In recent years, Australia has been boldly challenging China with no signs of letting up. However, perhaps because its economy and military are not large enough, Australia’s actions have not drawn much attention. Amid the US’s fierce condemnations of China for its handling of the Covid-19 outbreak, Australia has made some strong statements of its own.

On 19 April, Australian Foreign Affairs Minister Marise Payne stated that the Australian government insists on an independent international review of the Covid-19 pandemic, which includes the origins of the virus and China’s initial handling of the outbreak. She emphasised the need for China to remain transparent in its disclosure of Covid-19 information. On 23 April, Australian Prime Minister Scott Morrison said World Health Organisation experts should be armed with “United Nations weapons inspector” powers, and be allowed to enter countries hit by virus outbreaks to help prevent future pandemics.

Most recently, Morrison told reporters in Canberra on 5 May that the European Union will put forward a proposal to the World Health Assembly to call for an independent probe into the origins of the coronavirus, and that he had personally written to all Group of 20 leaders this week in his bid to create support for the investigation into how the virus started and spread.

Chinese ambassador to Australia Cheng Jingye warned on 27 April that demands for a probe may lead to consumer boycotts of Australian wine, beef, and trips for travel or further studies.

Animosity was not built in a day

Australia challenging China is not a sudden occurrence — it is an accumulative process. What are the few plausible reasons accounting for Australia’s strong actions?

Hamilton asserts that China is a “totalitarian regime bent on dominating Australia”.

First, a book written by an Australian academic speaks about the Chinese Communist Party’s infiltration of Australia. In March 2018, Silent Invasion: How China is Turning Australia into a Puppet State by Australian professor Clive Hamilton was published. The book claims that Beijing’s influence on Australia has already infiltrated into the realms of politics, economy, education, and religious groups.

Hamilton asserts that China is a “totalitarian regime bent on dominating Australia”. He writes, “China plans to dominate the world, and has been using Australia and New Zealand as a testing ground for its tactics to assert its ascendancy in the West.” He provides a wide array of evidence to prove that China has been targeting its diaspora in Australia to recruit "informers, plants and spies" in commercial, academic, and other circles.

Second, allegations by an Australian think tank of potential military threats by China. A research report released by the Australian Strategic Policy Institute (ASPI) in October 2018 claims that over the past ten years, China has sent some 2,500 People’s Liberation Army scientists to countries such as the US, the UK, and Australia. Many of these scientists have concealed their affiliations to the military.

According to the report, China sent numerous scientists to various UK universities for joint research on topics such as combustion in scramjet engines, which could power hypersonic aircraft capable of flying at six times the speed of sound. In addition, Wang Zhenguo, deputy chief of the PLA’s scramjet programme at the PLA’s National University of Defense Technology has co-authored 18 papers with foreign scientists.

Australian media said that Hastie’s comparison of China to Nazi Germany was by far the harshest criticism any member of Morrison’s government had made against China.

Third, an Australian member of parliament (MP)’s harsh criticism of China. On 8 August 2019, Australian MP Andrew Hastie published a lengthy opinion piece in The Sydney Morning Herald titled “We Must See China — the Opportunities and the Threats — with Clear Eyes”. In the piece, Hastie speaks in the same breath of the rise of China and the advance of Nazi Germany in 1940. He writes that China wants to replace the US and dominate the Indo-Pacific region. This would threaten Australia’s sovereignty and test its democratic values.

Australian media said that Hastie’s comparison of China to Nazi Germany was by far the harshest criticism any member of Morrison’s government had made against China. Morrison replied that while Hastie’s remarks did not represent the government’s stand, Hastie is entirely entitled to his own opinions. The spokesperson of the Chinese Embassy in Australia refuted Hastie’s claims in a statement, asserting that “history has proven and will continue to prove that China’s peaceful development is an opportunity, not a threat to the world”.

Fourth, Australia’s banning of Huawei’s 5G devices before the US. In June 2018, the Australian government indicated that it would ban Chinese telecommunications giant Huawei from participating in Australia’s 5G network architecture on the grounds of national security. With Australia growing increasingly worried over China’s threat to its national security, its precautionary measures have even spread beyond Australia. Around the same time as the indications on Huawei above, Australia also announced that it would be funding the Solomon Islands’ project to lay an undersea internet cable, thus prompting the Solomon Islands to withdraw its contract with Huawei. Former Australian foreign minister Julie Bishop said that Australia would provide funding and assistance to countries in the Pacific region in a bid to counterbalance China’s increasing influence in the region through its Belt and Road Initiative.

The Sydney Morning Herald once reported that Australia has become the first country to initiate countermeasures against Huawei and its 5G technology. In early 2018, electronics experts of the Australian Signals Directorate (ASD) were ordered to engage in a 5G digital war game exercise. Australian security and political leaders found the results sobering: if Australia was on the receiving end of such attacks, the country’s security defence would be rendered ineffective, leaving its systems extremely vulnerable. Following this exercise, Australia warned the US, their European allies, and other countries about Huawei, thereafter prompting the US to take action against Huawei.

Australia’s reliance on the Asia Pacific market means that the South China Sea is its maritime lifeline.

The worsening of China-Australia relations is but a facet of changes in China’s external environment.

Australia’s all-round challenge to China is highly similar to the Trump administration’s abrasive approach to China. Unsurprisingly, public sentiment in China has been negative. Global Times editor Hu Xijin even called Australia the “chewing gum stuck on the sole of China’s shoes”. The Chinese public seems to agree with the analogy and wants to “find a stone to rub it off”.

Meanwhile, the Australian Broadcasting Corporation wrote that Australia knows that it is “not the only nation to feel flame from the Chinese dragon”. According to the 2019 Lowy Institute Poll, Australian’s level trust in China has plunged, hitting its lowest point in 15 years, with only 32% of Australians saying that they trust China to “act responsibly in the world”. The worsening of China-Australia relations is but a facet of changes in China’s external environment.

Related: ‘Wolf-warrior diplomacy’: China's new normal? | Missouri sues, but should China be held accountable for the global spread of Covid-19? | Will China turn its back on the world again? | Will Covid-19 be the catastrophe that ends China's good fortune?