China has conducted an enthusiastic vaccine outreach in Malaysia. Can the US buck up?

While the Pfizer shot is the vaccine of choice in Malaysia and anchors the national immunisation programme, China’s Sinovac vaccine is readily available. Though perceived to be of lower efficacy, China's vaccine remains crucial in curbing the global spread of Covid-19, especially in poorer countries. Malaysian academic Peter Chang examines how American and Chinese vaccines have been distributed and administered in Malaysia and around the world, and looks forward to greater involvement from the US. 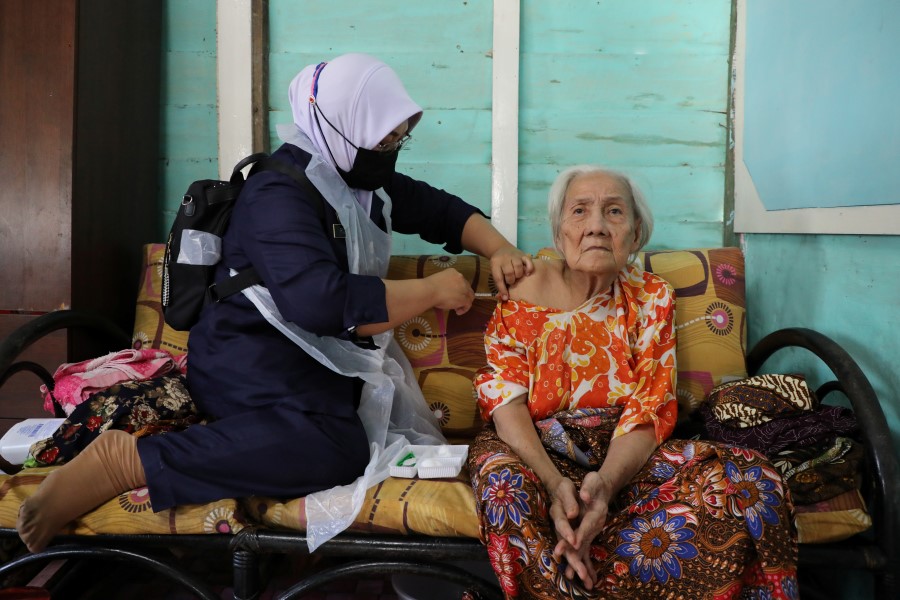 A woman gets a shot of Sinovac coronavirus disease (Covid-19) vaccine at home, administered by a healthcare worker in Sabak Bernam, Malaysia, 1 July 2021. (Lim Huey Teng/Reuters)

Candice Chan - 20 September 2022
Li Cheng, director of the John L. Thornton China Center of the Brookings Institution, notes that well-educated and professionally capable military technocrats are prominently represented in the PLA leadership, and this trend is set to continue after the 20th Party Congress. What contributions will this new corps of military technocrats make as Xi Jinping heads into a likely third term?
Read more
Translated by Candice Chan on 22 September 2021

In February 2021, the first batch of China’s Sinovac vaccine to Malaysia was received in a high-profile airport ceremony. Minister of Health Khairy Jamaluddin, who is in charge of the National Immunisation Programme (NIP), then chose to be the first recipient of the Sinovac jab in a show of personal confidence in the vaccine. By July, all the tranches of Sinovac were subsequently delivered on schedule. In August, two additional China vaccines, CanSino and Sinopharm, were approved for emergency use in Malaysia.

Despite Beijing’s enthusiastic outreach, China’s vaccine diplomacy is hitting some speed bumps. One issue pertains to the “halal” status of Sinovac. In a related development, Saudi Arabia granted permission to those vaccinated with Sinovac to undertake the Mecca pilgrimage on condition that they receive a third booster shot from an authorised vaccine. Underpinning this qualified approval was the deeper concern with Sinovac’s perceived relatively low effectiveness.

International bodies expressed worries over the lack of transparency of Sinovac’s clinical trials. Accurate assessments of China’s vaccine performance in real-life situations were stymied by the shortage of data. Together with anecdotal accounts of subpar performance, these criticisms fanned public apprehensions that eventually led to the removal of Sinovac from the NIP list. Pfizer is now the sole vaccine anchoring the remaining phases of Malaysia’s national immunisation campaign.

China’s overture to Malaysia is also taking place against the backdrop of an increasingly tense big power rivalry. In July, the US and Japan stepped up their vaccine diplomacy, each donating to Malaysia their spare inventory of one million doses of the Pfizer and AstraZeneca vaccines respectively. Vaccine diplomacy is now the new arena for soft power contestation, as geopolitical rivals compete for influence in countries like Malaysia.

China has administered a third of all Covid vaccines globally, underscoring China’s role as a lead contributor to the world’s supply chain.

Concerns over low efficacy and big power rivalry notwithstanding, China’s vaccines remain a vital component in the global fight against Covid-19. This is because they remain as some of the more accessible, relatively affordable, and easier vaccines to administer.

According to analytics firm Airfinity, China has administered a third of all Covid vaccines globally, underscoring China’s role as a lead contributor to the world’s supply chain. As China was able to contain the pandemic relatively quickly at home, its vaccine makers were able to export the bulk of their production. However, outbound shipment has since slowed as China seeks to vaccinate its entire population by the middle of 2022. Even so, at the International Forum on Covid-19 Vaccine Cooperation, President Xi Jinping pledged to continue contributing 2 billion doses to the global stockpile throughout this year. Thus, though not considered the best, China’s vaccine is likely to remain one of the most widely used in the world.

By comparison, in the West, the devastating virus outbreak early in the pandemic meant that vaccine productions were mostly retained for domestic use. But some of these vaccine-producing countries have been criticised for hoarding, purportedly four times over what is necessary, with widespread reports of stockpiles being left unused and disposed of once past their expiration date. Tedros Adhanom Ghebreyesus, the World Health Organization (WHO)’s director-general, has called out the wealthy countries’ “me-first approach” with a rebuke of hoarding as “a catastrophic moral failure”.

The quest for vaccine equity

Initiated in April 2020, the COVAX global facility aims to pool resources and distribute vaccines equitably to the developing world. Yet the WHO-led programme has struggled to acquire doses, as wealthy countries prioritised their domestic needs. China joined COVAX in May 2021, only after WHO greenlighted its vaccines for use.

Vaccine supplies are starting to come through but the COVAX pricing mechanism designed to ensure equitable distribution has floundered. Countries, rich and poor alike, are competing with each other for limited supplies. And the wealthier ones have scrambled to secure advance purchase agreements, pushing those with lesser means to the back of the queue. COVAX’s failure underscores another hindrance to vaccine equity. As manufacturers scale up production, the cost of vaccines becomes the next restriction on access.

Some countries are approaching the vaccine makers directly, bypassing COVAX altogether. Due to non-disclosure agreements, specific procurement costs are not made public. Pharmaceutical companies however do provide a range of prices, and based on the information available, Moderna is at the top end of the price scale while AstraZeneca is at the lower end.

China’s vaccines are not the cheapest, but as state-owned enterprises, Chinese manufacturers have shown greater latitude in packaging competitive contracts. In Malaysia, for example, the Sinovac deal allows the “fill-and-finish” process to be carried out locally, to facilitate technological transfer and an opportunity for Malaysia “to buy at a good price” according to Minister Khairy Jamaluddin.

...the Biden administration diverting funds initially designated for vaccination drives in poorer countries to pay for donations of the Pfizer vaccine to COVAX. This move calls into question the US’s commitment and priorities.

Another outlay often overlooked in the vaccination rollout are the handling costs. The inoculation process requires supporting facilities for transportation, storage and administration of the shots. In some of the poorest countries, these logistical supports are not readily available. A plight highlighted in a recent New York Times report on how some African states struggled to get donated vaccines from the airport into people’s arms. This is a difficulty most pertinent where Pfizer and Moderna are concerned, as these mRNA vaccines require ultra-cold refrigeration.

The same New York Times report alleged that the struggle to get vaccines to end users was aggravated by the Biden administration diverting funds initially designated for vaccination drives in poorer countries to pay for donations of the Pfizer vaccine to COVAX. This move calls into question the US’s commitment and priorities. Not to mention that the Americans signed on to COVAX only in February 2021, after the Biden administration rejoined WHO, reversing the Trump administration’s earlier withdrawal from the international body. This turnaround cast doubts over Washington’s reliability.

This brings us to a key feature in China’s vaccine diplomacy, namely its role in the broader Health Silk Road (HSR), an offshoot of its Belt and Road Initiative. First put forth in 2016 by President Xi, the HSR’s aim is to build an integrated regional network of healthcare and medical aid infrastructure. In the current vaccine drive in Indonesia and UAE, for instance, in addition to harnessing local vaccine production capacities, plans are afoot to also set up R&D facilities for medical training and scientific research. Some observers have ascribed these investments as China’s ‘medical diplomacy’ to develop a comprehensive international healthcare ecosystem to better prepare the world for future pandemics.

In contrast, aside from its vaccine donation, it remains unclear what the US’s next course of action will be to assist countries like Malaysia to recover from the pandemic. That said, the recently launched Build Back Better World initiative may provide an opening for America to maintain a strategic longer-range engagement with the developing world. If actualised, this US-led programme can play a pivotal role in reviving the pandemic-stricken global economy.

In Malaysia, Pfizer is the vaccine of choice, anchoring the national immunisation programme as China’s boosters are relegated to a supporting role. That downgrading notwithstanding, China’s vaccine diplomacy remains a prime mover in the unfinished worldwide battle against the coronavirus pandemic. And this is because China still offers some of the more accessible, relatively affordable, and easier to administer vaccines. Thus, though not considered the most efficacious, China’s “good enough” vaccine, and the “only one available” in some lower-income countries, is crucial in curbing the global spread of the lethal virus.

But China’s effort alone is not enough. As the world continues to face an acute shortage of vaccines, and with the crisis fast transmuting into a two-track pandemic of the haves and haves not, the richest nations should do more in helping the poorest.

Related: Has China done well in its vaccine diplomacy in Southeast Asia? | Sinovac or not: Thai vaccine politics | How Chinese vaccines are paving the way for China’s Health Silk Road | China's efficient delivery of vaccines to Southeast Asia