Recently, the West has proposed infrastructure plans in developing countries in a clear bid to rival China’s BRI. Chinese academic Bu Shaoying thinks that while it may be difficult for the West to succeed in achieving their ambitious plans, China and the West should consider working together, and turn competition into a win-win situation. 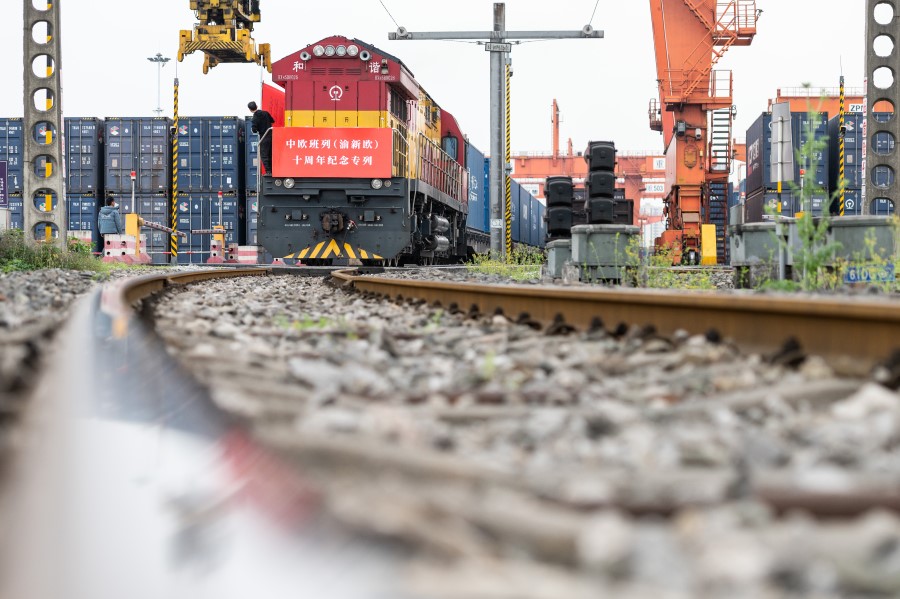 A train on the Trans-Eurasia Express under the China Railway Express, leaving a logistics centre in Chongqing, 27 July 2021. (CNS)

Candice Chan - 5 August 2022
China's "Foundation Plan" for iron ore has gained much official support, and is aimed at reducing reliance on foreign sources of iron, including Africa and Australia. The only way to do this effectively is for China to ramp up mining of its own iron resources. However, these resources are scattered and difficult to access, and of lower grade. This means China has its work cut out if it is to succeed.
Read more
Translated by Candice Chan on 10 August 2021

The US is leading a Western alliance in a big-power competition in containing China, and the sectors of interest have expanded to include assistance and cooperation in infrastructure for developing countries.

At the G7 meeting in June this year, the Build Back Better World (B3W) infrastructure plan was proposed in response to China’s Belt and Road Initiative (BRI); and in July, the EU passed the infrastructure plan for A Globally Connected Europe. Looking at the objectives, content, and workings of these plans and proposals, it is clear that they are aimed at rivalling and even obstructing China’s BRI.

The EU’s A Globally Connected Europe plan focuses on the principle that connectivity should be “sustainable, comprehensive, and rules-based”. It stresses the importance of investing in both physical infrastructure and regulatory frameworks, as well as the need to incentivise private investment. It says that it will engage in connectivity partnerships with “like-minded” countries and regions, such as ASEAN and the US, as well as Japan and India — countries that have already signed agreements with the EU on infrastructure-related cooperation.

The idea is to tap on the general strength of Western allies and private companies to come up with new standards and a new order for global infrastructure development...

These two major plans proposed by the US and EU emphasise the importance of values, rules, and standards. The idea is to tap on the general strength of Western allies and private companies to come up with new standards and a new order for global infrastructure development, to get developing countries to abandon the China-led BRI and invest in Western-led infrastructure projects instead, and rebuild the image and influence of the West among developing countries.

While the West’s infrastructure plans look ambitious, it is a huge question mark whether they will be able to pose a strong challenge to the BRI.

First, while these plans are centred around assistance and cooperation in economic infrastructure for developing countries, this is not a strength of the West.

After World War II, development assistance from Western countries used to be centred around “hard infrastructure”, to build up infrastructure in transport, energy, and industry, that would help backward regions develop their economies and earn foreign exchange, to resolve poverty and bread and butter issues through economic development.

However, since the 1970s, with rising debt among developing countries and the influence of neo-liberalism and democracy among Western countries, there has been greater focus on how such assistance can improve good governance and the people’s lives. Most official development assistance agencies in developed countries have gradually shifted away from large-scale infrastructure projects that are jointly initiated, designed, and built together with developing countries, to focus assistance on social public services such as reducing poverty and improving education and healthcare, as well as “soft infrastructure” such as improving legal regulations and capabilities building.

Too much emphasis on “high standards” would make the “infrastructure feast” provided by the West harder to digest for developing countries.

Even today, questions remain whether Western countries can once again provide large scale infrastructure tailored to fit the situation of more backward regions. Too much emphasis on “high standards” would make the “infrastructure feast” provided by the West harder to digest for developing countries.

Second, if the West wants to create an infrastructure plan on a scale to rival the BRI, resources and investment channels will be difficult. With the world economy hit hard by the pandemic, Western countries are facing rising debt, and their current resources would be used for domestic economic recovery. For example, US federal debt is currently at US$28.5 trillion, while US President Joe Biden’s Build Back Better Plan and other plans for the domestic economy are expected to hit US$7 trillion, of which US$2 trillion will be spent within the next four years.

In view of this, the solution given by Western countries is to attract private capital to come in. But for a long time, Western private companies have not been sufficiently willing to invest in infrastructure for developing countries, including (but not limited to) the following reasons.

1. Large-scale infrastructure projects are long-term and expensive, and most projects would not really bring direct economic returns to investors.

2. Exchange rate risks are higher in developing countries, and exchange rate fluctuations would directly affect the returns of foreign investors.

3. The financial markets and commercial regulations in developing countries are not sufficiently developed, and might lead to high costs for investors in pulling out of infrastructure projects.

Without being able to effectively lower the risks for private capital investments, the large-scale infrastructure plans proposed by the West may run dry of funds.

Third, the participation of many stakeholders would make it very difficult to coordinate and kick off both plans. In terms of A Globally Connected Europe, every EU country has strong demands for their own domestic interests. The key is whether they can agree on which regions and sectors to focus investments.

For example, France would be more interested in focusing investments in traditional spheres of influence such as northern and central Africa; Germany would be more inclined to invest in infrastructure in eastern Europe, the Balkans, and central Asia, to improve connectivity with Asia; eastern European members with weak infrastructure and little participation in international development and cooperation would hope to get more resources to invest in transport, energy, and communications infrastructure for themselves and surrounding regions.

China can be positive and open about the plans for global infrastructure cooperation proposed by the West, and turn competition into a win-win situation.

China and the West can turn competition into win-win

For the B3W, given the greater number of participants and wider scope, it is that much more difficult to coordinate aims, resources, and interests. Each country's national assistance agencies and import/export banks have different operations and regulations, while project contractors and private investors from developed countries, out of commercial considerations, might engage in negative competition over projects. Meanwhile, there are major differences between G7 countries over the sectors and regions to focus on, and willingness to work with China in the global infrastructure sector.

Despite the flaws and challenges in the West’s infrastructure proposals and plans, they will have an impact on China’s BRI, and will get in its way, both in word and deed.

China has to maintain its strategic determination in quickly and steadily pushing forward with the BRI, and making sure that it is green, open, transparent, and sustainable, and built to a high quality in line with local economic conditions. For instance, China can ramp up on eco-checks and regulatory frameworks on the BRI, improve transparency of cooperative projects, and put in more effort to reasonably increase the proportion of local materials and services used in the projects.

Furthermore, China can be positive and open about the plans for global infrastructure cooperation proposed by the West, and turn competition into a win-win situation. China can work more closely with the West in encouraging companies to cooperate in opening up third-party markets, driving multilateral development banks, and reforming the global multilateral investment framework. They can complement each other and bring better infrastructure services to the people of developing countries through good competition and effective cooperation.

Related: Can Biden’s new infrastructure plan rival China's BRI? | Even as the US obstructs its way, how can China build trust for the BRI? | BRI projects in Cambodia and Laos roll on despite Covid-19