Analyst Luo Zhiheng compares China's distribution of national income with 20 major economies and concludes that among other things, there is a need to address a lower-than-average share of personal income in China, in order to achieve common prosperity. The Chinese government can work towards the goal of fostering an olive-shaped income distribution pattern by adjusting the tax structure, providing more investment options to its people, and developing its social security network. 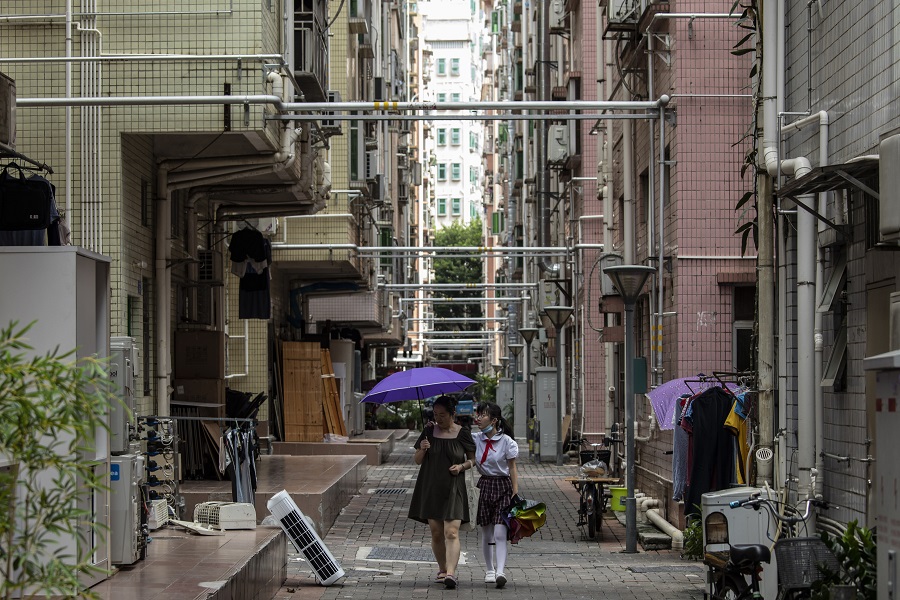 Grace Chong - 2 December 2022
Caixin notes that China is poised to roll out more policies to assist developers in an increasingly desperate attempt to arrest a protracted downturn of the multi-trillion-dollar property sector. However, amid the perform storm of changing demographics, Covid-19 disruptions, weakening demand and Beijing’s campaign of deleveraging, industry practitioners are bracing for a tough battle.
Read more
Translated by Grace Chong on 22 October 2021

To understand what it will take to achieve China’s common prosperity goal, we need to take a closer look at its income distribution patterns. It’s interesting to see how it differs from those of major economies.

We selected the 2018 fund flow statements of 20 countries from the OECD database and calculated the proportion of the three sectors in the distribution of national income.

The Nordic countries, which adopt social democracy and provide high level of welfare, have a significantly different distribution pattern. The share of government revenue is much higher than that in other countries, accounting for about 20% of the primary distribution. And the proportion is even more than 30% after redistribution adjustment.

At the same time, the share of the corporate sector’s revenue is relatively high, which is partly due to the extensive privatisation of public services in countries with high welfare spending, where the corporate sector assumes some government functions. Correspondingly, the share of the resident sector’s revenue is relatively small.

The Nordic “welfare countries” generally follow an operation model that combines a mixed economy based on private ownership with state macro-regulation, and adopt a comprehensive social security system supported by high taxation. As a result, the Nordic countries have the largest public service sector and the highest tax burden in the world.

However, with the evolution of the global political and economic landscape, this kind of Scandinavian distribution pattern is also facing a series of challenges, including, first, a decline in policy independence due to European integration; second, relocation of enterprises and other tax payers abroad due to high taxes; and third, an increase in government expenses due to the influx of refugees. At the same time, the refugees from the Middle East and North Africa coming to the Scandinavian countries have difficulty integrating into the local societies, which is creating social problems. In addition, the phenomenon of “free riders” is reducing the enthusiasm of workers and hurting innovation.

We have compared China’s regular features of national income distribution to that of other major economies. As revealed by the comparison, China needs to address the following problems:

Individuals accounted for 61.2% of China’s primary income distribution and 59.4% of the country’s disposable income in 2018. These figures were similar to those of Japan, South Korea and Russia, but lower than the average levels of the US and the UK.

The low share of personal income in China’s national income is largely attributed to low remuneration. Since the arrival of the Lewis turning point in 2008, labour has been a relatively rare resource in China. The share of net labor remuneration in China’s national income saw an increase from 30.3% to 38.4% in 2018. Yet, the country still falls behind developed economies in this regard, and the corresponding numbers for the US and the UK are 52.4% and 49.6%, respectively.

Amid the previous capital accumulation-oriented development of China’s economy, enterprises kept bringing down staff salaries in an effort to play a larger part in income distribution.

Amid the previous capital accumulation-oriented development of China’s economy, enterprises kept bringing down staff salaries in an effort to play a larger part in income distribution. In fact, the share of corporate income in national income remains high in despite a downward trend in recent years.

It remains unclear whether the share of government revenue is too high in China’s national income.

As revealed by a horizontal comparison based on our statistics, the Chinese government has a moderate share of the national income, as its share in the country’s primary income distributed and re-distributed income are similar to the average levels of its peers in the rest of the world.

But the Chinese government needs to optimise its revenue structure. The indirect-tax-dominated tax structure has weakened the "peak shaving" effect of taxation, as the burden of indirect tax could be easily passed on to consumers, hindering an increase in the share of personal income. In contrast, progressive direct taxes are conducive to adjusting income gaps. Along with that, China still has room to raise its social security expenditure, thereby expanding the coverage of social security.

In recent years, China has given full play to macro-control — the coverage of social security has been expanding continuously, and the social security expenditure has continued to rise. The share of the net social security contribution in the national disposable income has been negative for six straight years, standing at 0.6% in 2018. Despite this great achievement, China needs to do more to catch up with developed economies, such as the US (-7.6%) and the UK (-5.1%).

Today, China’s overall landscape of income distribution is stable and continues to improve. In fact, it is increasingly becoming an important foundation for economic stability and progress, and the broader vision of shared prosperity for everyone. In view of that, the following three policy suggestions are given.

• China must continue to pursue the policy of giving high priority to employment. Work-based earnings rely on jobs, and cannot be raised without stable employment.

• China must regulate its labour market as a whole and transform the household registration system in ways that enable an appropriate, orderly flow of manpower.

China must expand its financial product pool. This will help provide residents with more ways of investment, add to residents’ income from deposits, bonds, insurances and foreign exchanges, and produce a wealth effect.

• China must give an impetus to the stable, healthy development of its securities market.

• China must expand its financial product pool. This will help provide residents with more ways of investment, add to residents’ income from deposits, bonds, insurances and foreign exchanges, and produce a wealth effect.

• China must do more to protect property rights by improving its legal system.

• China must improve land transfer mechanisms across its urban and rural areas, as a way to allow rural collective land for construction to be put on the market and to provide peasants with more access to property income.

Developing a tax model that lays equal stress on turnover tax and income tax has been a focus in China for many years. However, indirect tax (e.g. turnover tax) still dominates the tax-based income distribution in the country. On top of that, it is crucial that government expenditure for improving people’s livelihoods and social welfare is increased.

• China must reform and improve its tax system. It is essential to shift the focus from indirect tax to direct tax, and enact laws on property tax and consumption tax and quickly implement them at the local government level. The feasibility and mechanisms needed for the implementation of an inheritance tax and a gift tax also need to be further explored.

• China must also improve its fiscal expenditure structure to enable an increase in spending for improving people’s livelihoods.

• China must develop its social welfare system by actively supporting charitable organisations and deepening awareness of charity across the whole society.

This article was first published by Caixin Global as "Weekend Long Read: Raising Personal Income Key to Achieving Common Prosperity". Caixin Global is one of the most respected sources for macroeconomic, financial and business news and information about China.