A new Cultural Revolution? Why some Chinese are shocked by the CCP's relentless pursuit of 'common prosperity'

The Chinese authorities’ recent moves to regulate industries from internet platforms to tutoring to gaming have prompted fears of a new Cultural Revolution. Despite benign intentions expressed and a clear line drawn in the sand on history, what are people so afraid of? Zaobao associate editor Han Yong Hong ponders the question. This aerial photo taken on 1 September 2021 shows students attending the opening ceremony on the first day of the new semester in Wuhan in China's central Hubei province. (STR/AFP) 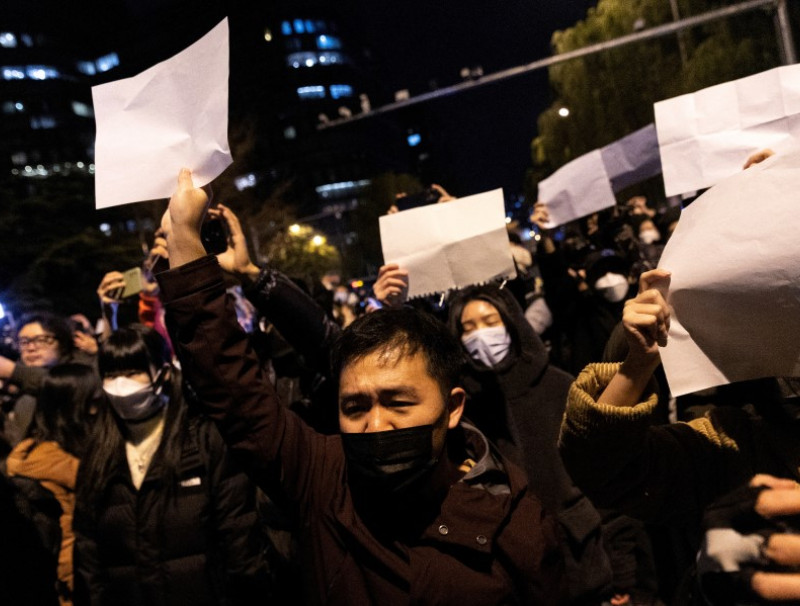 Candice Chan - 19 January 2023
While some analysts have spoken of the “white paper protests” against Covid restrictions in China as a turning point in citizen movements aggregating change, Taiwanese academic Wen-Hsuan Tsai says that the CCP had made its own calculations regarding easing China's Covid policy. Moreover, with its high-tech methods of monitoring protesters, the events of last November were well within its sights to deal with.
Read more
Translated by Candice Chan on 3 September 2021

For the past six months or so, the Chinese government has meted out harsh punishment on internet giants; from July, it started expanding its scope to clamp down on the tutoring industry and clean up the entertainment industry; recently, it even cancelled exams for primary one and two students and restricted minors to a maximum of three hours of video games per week. Many have linked this series of rapid-fire moves by the authorities to the directive last December by the Chinese Communist Party (CCP) Politburo to “prevent the disorderly expansion of capital”, as well as the “firm promotion of common prosperity” proposed by the top levels of government in August this year. The political resolve, cohesiveness, and strength shown by the authorities has aroused attention, awe, and even worry both within and outside of China.

The signs are clear that China is “turning to the left” with the intention of building a fairer, “cleaner” society, but people feel differently about this. Some interpret this positively — economically, China has been “heading to the right” for many years, leading to the pursuit of money, “involution” in education, and the internet being controlled by capital, so that it is now time to correct the situation. Others recall what happened before, like “killing the rich to help the poor” and the Cultural Revolution; for some, it conjures up the horrors of the Cultural Revolution and even a deep-seated fear of communism. Yet others seem excited at a revolution.

One netizen reportedly commented: “Is this considered the first big-character poster to start the movement?” Some media people in Beijing are muttering uneasily: what does this mean?

Over the past few days, the term “big-character posters” (大字报) — associated with the Cultural Revolution — has been resurrected in discussions on the ground.

It all started with a commentary last week by left-wing we-media writer Li Guangman, who declared that “China is undergoing major changes; from the realms of economics and finance to culture and politics, a deep change or even revolution is taking place.“ He even claimed that this was a political change, and “everything that obstructs this people-centric change will be cast aside”.

Li’s article was shared by multiple state media outlets, prompting speculation that the authorities agree with it. One netizen reportedly commented: “Is this considered the first big-character poster to start the movement?” Some media people in Beijing are muttering uneasily: what does this mean?

Global Times editor-in-chief Hu Xijin, who has always been good at reading the authorities’ intentions, yesterday published a post on WeChat rebutting Li’s article as being seriously misjudged and misguided. He explained that China often talked about self-revolution, but what it really meant was self-motivation, and not a destructive revolutionary movement. Hu also said he was worried that such rhetoric would dredge up certain memories of history and lead to confusion and panic. At the end of his article, Hu soothed readers by saying that China’s reform and opening up would not change, adding: “Don’t believe in extreme readings of China’s regulatory measures.”

Hu posted his article with the intention of easing anxieties over the memories of the Cultural Revolution sparked by Li’s article. The fact is, China’s moves over the past six months in tackling monopolies and regulating the tutoring, entertainment, and gaming sectors do make sense and should be able to win general approval. China’s current political climate is also very different from what it was before the Cultural Revolution; politically, there is no need to initiate another Cultural Revolution.

But the problem is, why does positive action still spark fear and even associations with a new Cultural Revolution?

Perhaps we can take a look at a few hypothetical causes. For instance, the government’s swift and harsh crackdowns have overwhelmed the people. Historical events are indeed frightening to those who have lived through them and it is true that radical leftists exist in China and are waiting for an opportunity to strike — terms like “big-character posters” have already re-emerged.

With regards to the Cultural Revolution, the “Resolution on Certain Questions in the History of the CCP Since the Founding of the People's Republic of China” passed during the sixth plenary session of the 11th CCP Central Committee in 1981 has clearly stated that it was “initiated by a leader labouring under a misapprehension and capitalised on by counter-revolutionary cliques, led to domestic turmoil and brought catastrophe to the Party, the state and the whole people”. This description has never changed and neither is any part of the text ambiguous or unclear. Why are some people still fearful? Do they lack confidence because they did not see a clear attitude? That is food for thought.

After all, when power is not curtailed by a system of checks and balances and is at the same time striking hard every time it makes a move, even bystanders would be shocked and alarmed.

As for history, the CCP handles issues of the past by looking forward. Over the years, after they have reviewed historical mistakes and documented them, they look forward. It was decided on 31 August during a CCP Central Committee Political Bureau meeting that the sixth plenary session of the 19th CCP Central Committee will be held in November. The agenda includes studying the issue of “comprehensively reviewing the major achievements made and the historical experience accumulated during the Party's 100 years of endeavour” and trying to “understand why the CCP succeeded in the past 100 years and know how it can sustain the success in the future”.

This is a timely and forward-looking theme that will likely pave the way for common prosperity to be delved into at the 20th Party Congress. This year, the CCP was on schedule in achieving the eradication of absolute poverty, celebrated the 100th anniversary of the CCP in July, and announced in August that it would promote common prosperity. Come November, it will review its history at the sixth plenary session, which would become an important part of its way forward. Besides, since there is no need to worry that a change in top leader during the 20th Party Congress next year would mess things up, it seems that everything can go ahead smoothly as planned. Will the sixth plenary session reiterate the conclusions of the 1981 resolution? I am not optimistic about that.

At present, the government’s crackdown on the disorderly expansion of capital, the tumultuous path of promoting common prosperity, the mixed voices in public opinion, and the upheavals faced by industries that are being regulated are still worrying from time to time. After all, when power is not curtailed by a system of checks and balances and is at the same time striking hard every time it makes a move, even bystanders would be shocked and alarmed. But based on the past few years of experience, China will not change its path just because people are debating about issues or are worried. Instead, China will continue taking big steps towards the correct path that it has chosen for itself.

Related: Why China is cracking down on big capital | 'Winner takes all' no more: China is ready to build the socialist regulatory state | A new paradigm needed: China cannot achieve 'common prosperity' with Marxism and class struggle | Self-assessment: How will the Chinese Communist Party evaluate the Xi Jinping era thus far? | Building a moral and prosperous Chinese society: Prelude to a social revolution in China?