Building a moral and prosperous Chinese society: Prelude to a social revolution in China? 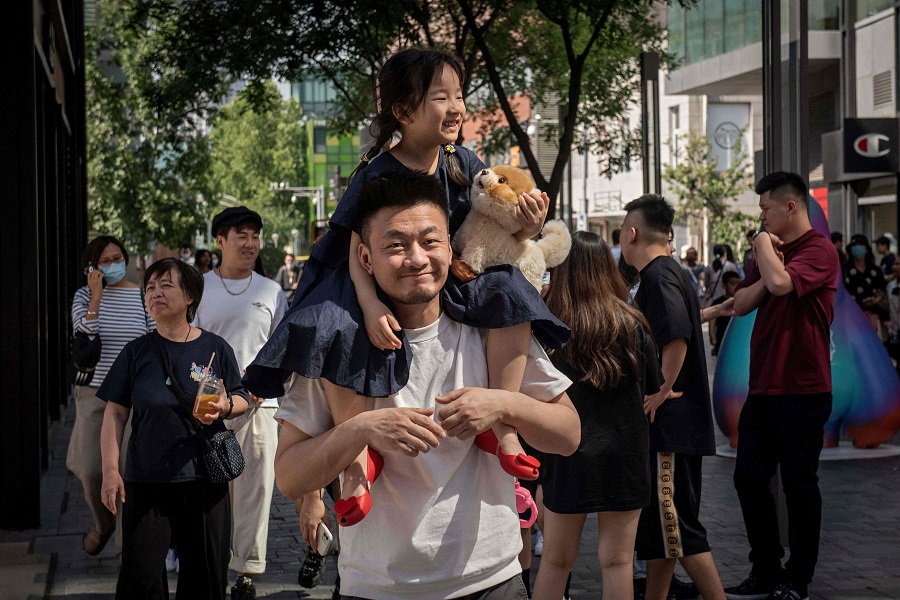 A young girl sits on her father's shoulders outside a shopping mall in Beijing, China, on 1 June 2021. (Nicolas Asfouri/AFP)

Grace Chong - 28 June 2022
While some pundits have it that Iran sees gaining full membership of the Shanghai Cooperation Organisation in terms of geopolitics, Fan Hongda thinks that the more bread-and-butter concern of strengthening economic and trade cooperation is on its mind. But this is not to say that Iran does not harbour ambitions of playing a greater regional role.
Read more
Translated by Grace Chong on 20 August 2021

Chinese Communist Party (CCP) leaders met for the first time on 17 August since their summer retreat in Beidaihe. At the top of the agenda was the promotion of “common prosperity” and wealth redistribution. During the meeting, CCP General Secretary Xi Jinping positioned common prosperity as an essential requirement of socialism and a key feature of Chinese-style modernisation. The meeting also pledged to expand the size of the middle-income group, encourage high-income groups and enterprises to give back to society more, and rectify the order of income distribution.

Chinese internet giant Tencent Holdings Ltd. responded immediately the following day, announcing that it would invest 50 billion RMB (S$10.5 billion) to help promote the country’s common prosperity initiative. This is the second sum of 50 billion RMB that Tencent has forked out in four months for public welfare causes. The first time was for an initiative to promote “sustainable social value innovation” that encourages solving social problems through technology and business.

If Tencent’s investments were taken as the public relations fee that the enterprise has paid to avoid getting into trouble, then it is far less than the amount it has lost during the recent regulatory crackdown. Tencent has become the next regulatory target following Alibaba. In a span of six months, over 2 trillion RMB of Tencent’s market value has been wiped out. Comparatively, the 100 billion RMB that it has forked out to help promote the country’s policies is insignificant.

By comparing these two sets of figures, I am not criticising Tencent for attempting to escape misfortune by pulling a trick. Instead, I want to highlight the control that CCP higher-ups have over an enterprise’s fate.

... many of today’s massive tech companies in China do not rely on the advancement of technology to stand out, but on the sheer size of the Chinese market and business model. As soon as one company collapses, countless competitors would rush to fill the gap.

Tencent recently released its earnings report on 18 August. Its president Martin Lau said that internet supervision is a global trend and that more regulations “should be coming”. “Our attitude during this wave of regulation is that we want to embrace this new environment fully, and we want to establish ourselves as fully compliant,” he added.

Chinese enterprises of this scale should be aware that higher-ups will go all out in punishing monopolistic practices, cracking down on the “disorderly expansion of capital”, and even eliminating industries that advocate extravagant lifestyles and intensify “involution” in society. The recent incidents that happened to Ant Group, Didi Chuxing, celebrities embroiled in scandals, and after-school training institutions prove this point.

Large enterprises should also be more careful. If they misjudged the situation — say, they rushed to get listed in the US at the wrong timing — not only would they face serious consequences and implicate their investors, they could even be slapped with a lawsuit.

Besides, many of today’s massive tech companies in China do not rely on the advancement of technology to stand out, but on the sheer size of the Chinese market and business model. As soon as one company collapses, countless competitors would rush to fill the gap. Coupled with society’s feelings of hatred towards the rich people, users and public opinion may not sympathise with the situation.

Under such circumstances, and based on observations of Xi’s governance style, it becomes no surprise that the Central Financial and Economic Affairs Commission pushed for “common prosperity” at the meeting on Tuesday. Instead, it feels like it has finally happened.

However, the society of “common prosperity” that the CCP wants to build is not just about income. It is also about morals, in terms of abiding by the values of simplicity and being proud of one’s labour, not being overly concerned about scores and grades, and being patriotic.

The crux of “common prosperity” is in making structural adjustments to income distribution, which implies the intention to “rob the rich” to give to the poor. A lot of time was spent on talking about income at the meeting, such as increasing tax and enhancing social security programmes and the government’s transfer payments, expanding the size of the middle-income group, forming an olive-shaped distribution structure, making basic institutional arrangements on distribution, redistribution and a “third distribution”, reasonably adjusting “excessive” incomes, cleaning up and regulating unreasonable income, and so on.

It can be foreseen that China will limit income from getting too high and the wealthy will be asked to donate more money, and it is also highly likely that the government will quickly implement property and inheritance taxes.

However, the society of “common prosperity” that the CCP wants to build is not just about income. It is also about morals, in terms of abiding by the values of simplicity and being proud of one’s labour, not being overly concerned about scores and grades, and being patriotic. Recent happenings such as entertainment artists signing a written commitment to uphold the moral code and artistic standards, the authorities encouraging karaoke outlets to have a category of “good” songs in their playlists, and criticising the “fandom” culture, are all creating such a climate.

With wave after wave of publicity in state media, one comment appeared on China’s social media: “The new-generation successors to socialism don’t go for extracurricular tutoring, don’t play video games, and don’t follow idols. After finishing their homework in school, they go home to practise on developing their inner strength (阳刚气质) for an hour every day, then go to bed promptly at 10pm. They take the initiative to do the housework and push their parents to give them young siblings that they promise to take care of. They only like the opposite gender, and don’t get into relationships at a young age, but when they are at the right age they immediately get married and have children.”

The writer’s disagreement shows in the post. However, there is nothing wrong with going for fairer income and simpler morals. Late last year, Oxford University social anthropology professor Xiang Biao criticised China’s “involution” as a competition that does not allow failure or quitting. “Society’s stability and so-called development is maintained by this intense competition.” He said people go all out in all aspects of life to gain that little bit of competitive advantage to squeeze their way into others’ space, while using up and wasting their own mental energy.

Xiang also told Bloomberg recently that the current model of development is not very sustainable, and there is a need and demand for relatively dramatic change.

Is this the prelude to a social revolution? We will have to wait and see. It must be pointed out that the CCP’s push for common prosperity is probably not just to show the advantages of socialism or to improve its image, but a return to the original intention of socialism, which is also in line with what Chinese society needs. In fact, former CCP general secretary Hu Jintao had also driven social reform and improved society fairness and justice through building a social and medical security system. China today should do better.

In starting a new social revolution, timing, as well as respect for the rules, private property, and personal space, will all be criteria in assessing how good and modern the system is.

But at the end of the day, even if the aims are good, if the approach does not address the underlying issue, then it would be treating the symptoms but not the root cause. And if the moves are too hard or intense, it would backfire instead.

The meeting also called for preventing and resolving major financial risks and abiding by the principles of commercialisation and rule of law, which should also apply in the process of “common prosperity”. After all, the actions by the authorities over the past six months still resemble a movement — new regulations have changed the rules overnight, the market becomes completely different, damaging companies’ positivity and sparking anxiety. In starting a new social revolution, timing, as well as respect for the rules, private property, and personal space, will all be criteria in assessing how good and modern the system is.

Related: Can strict regulations save Chinese youths from gaming addiction? | China’s tutoring crackdown: Is the Chinese government prepared for its consequences? | A burning issue among Chinese youths: How to escape the rat race? | China’s demographic crisis: The farmers should have a say