China’s demographic crisis: The farmers should have a say

Han Dongping points out that the views of the rural population in China should be taken into account in the three-child policy or other population policies. They were the most affected group when the the one-child policy was implemented decades ago. The government made the mistake of not consulting them then, alienating their stronghold of support in the process. They should not make the mistake again. 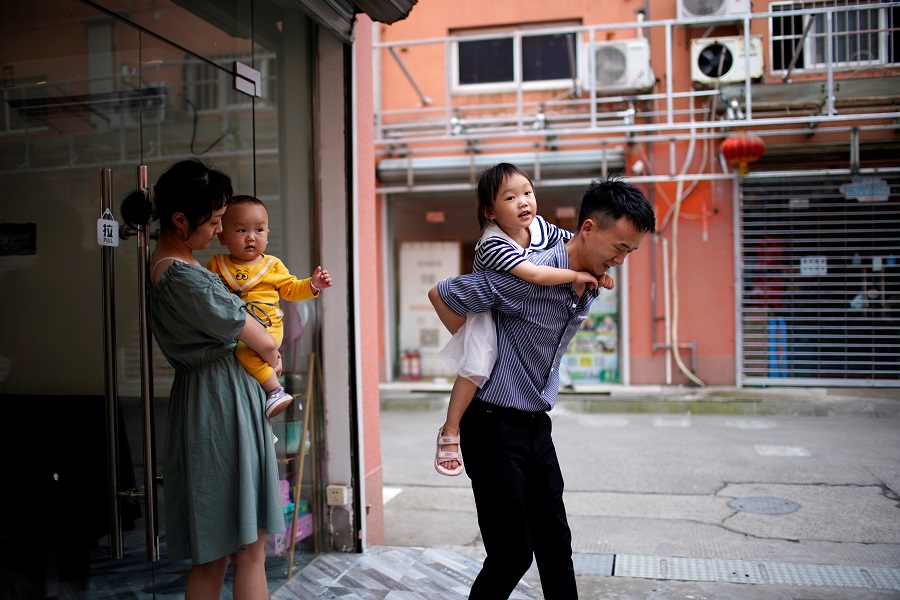 A couple plays with their two children on the outskirts of Shanghai, China, 3 June 2021. (Aly Song/Reuters)

Grace Chong - 21 July 2021
Cultural historian Cheng Pei-kai remembers an email from a Hong Kong secondary student, who wanted a "substantial and authoritative" answer from him about the relationship between civilisations and their cultures. The 16-year-old had asked: What affects the passing down of cultural traditions? Should culture be passed on in its entirety? What role does commercialisation play?
Read more
Translated by Grace Chong on 16 June 2021

China’s recently released seventh national population census has people worried that there might be a further decline in the country’s birth rate and a rise in the ageing population. China has always been among the world’s most populous countries; its people once made up a quarter to a third of the world’s total population. However, since the government imposed mandatory family planning in 1980, China’s share of the world population has shrunk to about 18%.

The one-child policy has been lifted in recent years, but Center For China & Globalization (CCG) non-resident senior fellow Huang Wenzheng gauges that since China’s birth rate continued to fall after the two-child policy was announced in late 2015, the number of births in China may drop to five million annually while the number of deaths could hit a high of 25 million, resulting in a significant decline in the country’s population. Thus, Huang believes that China should not only relax its restrictions on birth but also encourage people to have children. There have even been proposals that the parents of each newborn child should be given a reward of 1 million RMB.

China is not the only country with a declining birth rate. Countries such as Japan, Germany, South Korea, Singapore, and Italy are facing this problem too. But unlike China, theirs is a gradual and natural process. In 1979, Chinese paramount leader Deng Xiaoping visited the US and imbibed the extreme birth control measures suggested by the American elite. After returning to China, he introduced the one-child policy as an unbreachable key tenet of national policy.

To improve China’s relations with the US, Deng was happy to accede to the US’s request of lowering the birth rate. But Deng did not fully understand why Chinese farmers wanted to have more children.

As China-US relations were tense for over two decades from 1949 to 1972, the US government was unable to exert any influence on China’s population policies. When both countries established diplomatic relations in 1979, the US finally gained the chance to influence the Chinese government. To improve China’s relations with the US, Deng was happy to accede to the US’s request of lowering the birth rate. But Deng did not fully understand why Chinese farmers wanted to have more children.

China’s smaller urban populations had better social benefits, such as free education, free medical care, and pension. But Chinese farmers hardly had social security in terms of medical care, education, or pensions. Only the people’s communes, dismantled by Deng in 1979, provided them some form of social security. This meant that farmers could only rely on their children. The Chinese tradition of raising children to prepare for old age (养儿防老) has endured for thousands of years.

To implement the one-child policy, the Chinese government came up with a “one fails all fail” rule. If any local official failed to properly enforce the one-child policy, they would be dismissed from their posts. Township officials thus resorted to any means to keep their jobs — they forced the farmers to get abortions or be sterilised, and did everything they could to enforce the policy. In some regions, if the couple refused to abort their baby, officials would cut their water and electricity supply, remove their furniture and household appliances, or even demolish their homes.

To keep their child, farmers would hide or leave their hometowns. When township officials failed to arrest the couple on the run, they would capture the couple’s parents instead. In the name of enforcing a basic national policy, many local officials disregarded national laws and destroyed their own people, making rural life unbearable.

The Chinese Communist Party (CCP) has always seen “serving the people” as its purpose. But the one-child policy utterly destroyed the relationship between the government and the farmers.

The Chinese Communist Party (CCP) has always seen “serving the people” as its purpose. But the one-child policy utterly destroyed the relationship between the government and the farmers. The latter came to believe that CCP officials were even worse than the Kuomintang officials and saw themselves on opposing sides with the party. In fact, the one-child policy has eroded the public support that the CCP has fought so hard to forge over the decades. It was thanks to the farmers’ support that the CCP gained power, but the government has deeply hurt them with the cut and dried one-child policy. If not for Chinese President Xi Jinping’s later efforts in fighting crime and corruption as well as alleviating poverty, the future of the CCP would have been bleak.

Will the CCP alienate their rural base again?

It was the subjective decision of politicians back then to implement China’s family planning policy. Not only that, the policy was left unchanged for over 30 years and no one ever asked for the opinions of farmers or grassroot cadres. It was not until recently when China faced a demographic crisis that the government decided to relax restrictions and implement the two-child and now the three-child policy. But at this point in time, it seems that the suggestions of a few demographers are not enough to change China’s demographic crisis.

There are about one billion farmers in China. The majority of the Chinese population is intimately related to farmers and villages, and many city dwellers grew up in the villages as well. To truly solve such a major population problem, the opinions of the farmers and grassroot cadres should be heard. It is not as easy as the Politburo holding a meeting and deciding to implement the three-child policy. Farmers and grassroot cadres should have ample opportunities to express their opinions and propose solutions. The Chinese government has the tradition of conducting meetings at the grassroots level and mobilising the masses to solve problems together. Xi has always talked about adhering to his “mass line” campaign. It is now time to put it into practice.

Related: Is China facing a demographic crisis? | Can China reverse its population decline? | A Chinese woman's status and the one-child policy

Society
Not just a tech war: What China can do to better compete with the US and create a better world