A secretive centenary celebration: Can the CCP be more open?

Amid paltry information released by the authorities, Yang Danxu has learnt to rely on “traffic updates” for a heads-up on events marking the 100th anniversary of the founding of the Chinese Communist Party. On the actual anniversary date tomorrow, it seems that a ceremony at Tiananmen Square will be a main event. 100 years after its founding, the CCP still seems shrouded in mystery, not least the details of its centenary celebrations. As the party moves forward, will it let a little more light shine in? 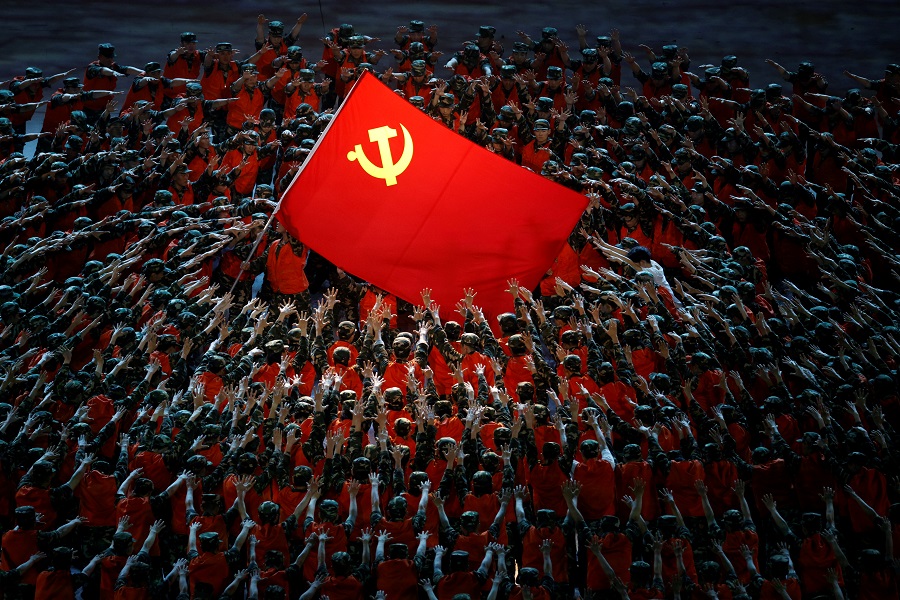 Performers rally around the party's flag during a show commemorating the 100th anniversary of the founding of the Communist Party of China at the National Stadium in Beijing, China, 28 June 2021. (Thomas Peter/Reuters)

Grace Chong - 30 January 2023
Amid ongoing tensions, a high-level visit by US Secretary of State Antony Blinken to China in the coming week shows hope for improved relations between the two economic powerhouses. Zaobao correspondent Yu Zeyuan notes that while the meeting may not produce practical results, it is a much needed exchange to manage and control China-US relations from worsening.
Read more
Translated by Grace Chong on 30 June 2021

Tomorrow, 1 July 2021, is the 100th anniversary of the founding of the Chinese Communist Party (CCP). Numerous foreign media have been on tenterhooks, trying to get a clear picture of the celebratory events lined up.

Reporters would always like to know the order of proceedings ahead of time so as to coordinate the workflow and to make contingency plans. But in China, it is extremely difficult to make arrangements before a major event.

The officials held a press conference in March running through various commemorative activities that would be held to celebrate the CCP’s centenary. However, we are now at the end of June and the main celebration will be held tomorrow, but no one knows exactly when and how the celebratory events of the 100th founding anniversary would be conducted.

Earlier, a Chinese media reporter taught me a trick: check Beijing’s traffic control notices and take note of the date, time, and venue of road closures. That way, we would roughly be able to gauge the celebration arrangements.

This trick indeed worked. On 25 June, the Beijing Municipal Public Security Bureau released a statement saying that traffic control measures would be implemented around the National Stadium (known as the “Bird’s Nest”) and its environs on 29 June for a grand art performance commemorating the 100th anniversary of the CCP. This was practically an official announcement of the date of the performance.

Unexpectedly, less than three days after the announcement was made, the date of the performance was suddenly changed. On the morning of 28 June, state media announced the latest traffic control measures saying that the art performance originally planned for 29 June would be brought forward to 28 June due to certain reasons. It is rare for a major art performance marking the party’s centenary to have its date changed just like that, and we will never know the real reason for it.

Details of the performance were kept under wraps as well. Quoting some netizens, Hong Kong news portal hk01 reported on 28 June that Chinese actress Song Jia had announced on her Weibo on 9 June that she could not be the judge for the 24th Shanghai Film Festival’s Golden Goblet Award because of sudden and pressing work arrangements. It turned out that she was part of the art performance commemorating the 100th anniversary of the CCP and had even “disappeared” for 20 days because of this event.

While such rumours cannot be verified, this art performance titled “The Great Journey” was certainly kept private and confidential. Prior to the performance, there was virtually no news of what was going to happen on major Chinese social media platforms.

It is a pity that this performance that was not broadcast live seemed to have taken place in a parallel universe.

State media Xinhua News Agency only reported on the evening of 28 June after the performance that Chinese President Xi Jinping and seven Politburo members, as well as Vice-President Wang Qishan and other party and state leaders had watched the performance together with an audience of 20,000 at the National Stadium. The report described the beauty of the National Olympic Sports Center amid spectacular light effects at night, set against the golden Bird’s Nest and deep blue Water Cube (Beijing National Aquatics Center).

It was reported that the Bird’s Nest was heavily guarded that night. Apart from specially licensed vehicles and personnel dedicated to the performance, other vehicles and pedestrians were banned from entering the premises. It is a pity that this performance that was not broadcast live seemed to have taken place in a parallel universe. Apart from the 20,000 spectators who were invited to watch the performance live, ordinary Beijing residents could only watch the fireworks from afar and leave the night’s events to their imagination.

Tiananmen Square event likely to be a highlight

On 29 June, Chinese media released an “official announcement” that a ceremony will be held from 8am on 1 July at Beijing’s Tiananmen Square, the most prominent event in this year’s CCP centenary celebrations. But apart from the fact that CCP general secretary Xi Jinping will give a speech, the length, format, scale, and attendees remain unknown.

This is the first CCP anniversary celebration at Tiananmen Square since it came into government, and it is likely to be the largest. This past weekend, the second rehearsal was held in the Tiananmen area; state media reports revealed that 33,000 people were involved in the rehearsal as participants, spectators, and security. The turnout for the actual event is expected to be 100,000, far larger than any previous anniversary.

Netizens also captured images of helicopters and fighter aircraft flying in formation to form the number 100 above Tiananmen Square, which is probably a part of the celebration. Of course, there is much attention on whether CCP political veterans including the two previous CCP general secretaries Jiang Zemin and Hu Jintao will attend the ceremony.

All this curiosity boils down to the veil of secrecy that still shrouds the CCP’s political elite and their internal political workings and policymaking process.

Foreign media is especially interested in all this because — journalistic work requirements aside — to some degree the CCP at 100 years old remains full of mystery, and the fewer public channels there are to get to know the CCP, the more curiosity and speculation there is.

Through the form and content of the CCP’s centenary celebrations, people want to know how this party summarises its history and assesses internal and external challenges, and by extension how the country they lead will develop and influence the world in future. Such an important celebration is also a rare opportunity for people to observe senior CCP leaders, and maybe get a glimpse of CCP veterans who are usually not seen in public. All this curiosity boils down to the veil of secrecy that still shrouds the CCP’s political elite and their internal political workings and policymaking process.

A fellow journalist said: “The CCP is no longer an underground party. Does the centenary have to be so hush-hush?” Of course, there is no margin for error with the grand centenary, and security is probably a key consideration for keeping the details of the event secret, especially information about the itinerary of its leaders, which cannot afford to be leaked.

Before the CCP came into government, as an underground party it was surrounded by opponents and had to be secretive; a century later, it has grown into a mighty system. Can the CCP be more confident and open in lifting the veil of mystery in its political culture?

Related: When will the CCP stop being an ‘underground party’ in Hong Kong? | Why is the West ganging up to fight the Chinese ruling party? | Heritage, CCP traditions & liberalism: Three fundamentals of China's new social contract | Mao Zedong to Xi Jinping – Five generations of CPC leaders