When will the CCP stop being an ‘underground party’ in Hong Kong?

For decades, the Chinese Communist Party (CCP) in Hong Kong has been seen as somewhat of an underground organisation which operates in the shadows. This could soon be changing. Since the anti-extradition law protests in 2019, Beijing has emphasised that Hong Kong has to be run by “patriots”, and there are growing voices in support of the CCP coming out or operating in the open. How will this change the political ecosystem in Hong Kong? 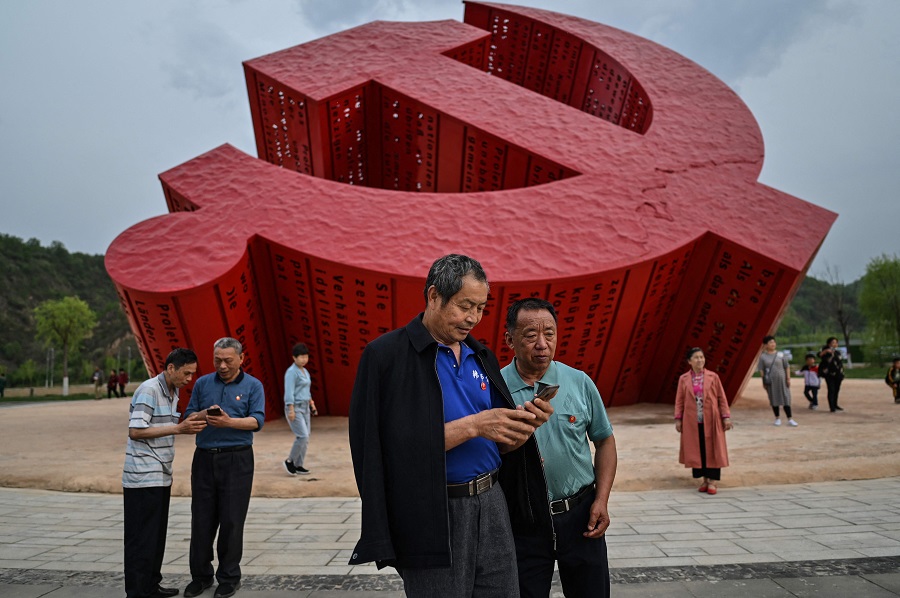 A pit stop on a government organised media tour — a monument of the hammer and sickle in Nanniwan, some 60 km from Yan'an, the headquarters of the Chinese Communist Party from 1936 to 1947, in Shaanxi province, China on 11 May 2021. (Hector Retamal/AFP) (Hector Retamal/AFP)

Grace Chong - 11 January 2022
Chen I-hsin asserts that the US is no longer in a position to facilitate cross-strait talks, given that China’s national strength has increased considerably and the US is no longer seen as a neutral arbiter. Moreover, the “two states” theory which Taiwan’s ruling party seems to support leaves little room for dialogue, rendering any pressure from the US futile.
Read more
Translated by Grace Chong on 1 June 2021

In Hong Kong, there is an organisation that no one can see or touch, but which affects everyone’s lives. This is the Chinese Communist Party (CCP).

It has been 24 years since the handover of Hong Kong. But interestingly, the ruling CCP’s party organisation in Hong Kong still operates as an “underground party” and maintains a high level of secrecy.

Years of keeping a low profile

The CCP will be celebrating its 100th anniversary on 1 July this year. In tandem with various local governments in the mainland who have started celebrations since May, civil organisations in Hong Kong have launched a series of related activities. Many Hong Kongers wonder: when will the CCP stop operating “underground” and openly hold party celebrations in Hong Kong?

Data shows that after the CCP was founded in Shanghai on 1 July 1921, operatives were sent to Hong Kong in August that same year, forming the first underground party under Su Zhaozheng. From then on, the CCP left its trail in Hong Kong, becoming a Hong Kong party committee with a complete organisational structure.

Quoting scholars in her book Underground Front: The Chinese Communist Party in Hong Kong, Christine Loh of the pro-democracy camp noted that around 23,000 to 28,000 CCP members were in Hong Kong in 1997.

With such a massive team, the CCP did think about going public after 1997. In the May 1997 issue of The Nineties (《九十年代》), Xu Jiatun, former director of Xinhua News Agency’s Hong Kong Branch, did comment about such deliberations. He said given that the CCP was not only operating in the open in the mainland but also the ruling party, it made no sense for the CCP to remain underground and illegal after the handover of Hong Kong. The options then were either revocation, transformation or going public.

Optics for ‘one country, two systems’

But in the end, this matter was left unresolved. The CCP has always kept the identity of Hong Kong party members highly confidential — not only are they not talked about publicly, even the pro-establishment camp also avoids talking about whether they are party members. For example, when former Hong Kong Chief Executive Leung Chun-ying announced that he was running for the top job several years ago, he strongly denied that he was a member of the CCP. Former president of the Legislative Council of Hong Kong Jasper Tsang Yok-sing was more candid when faced with the same question. He simply said that he would not answer the question, which was an indirect way of admitting that he was a member of the CCP.

... the CCP’s inability to register as a “political party” in Hong Kong directly prevents it from publicly operating in Hong Kong.

But some people also say that the CCP’s “invisibility” in Hong Kong has to do with how the CCP has pegged Hong Kong after its return to China. Hong Kong’s role in the development of New China has always been to provide middleman services to China in terms of overseas trade and finance. Even after Hong Kong’s return in 1997, the CCP sees Hong Kong’s situation as complex and believes it would be easier for CCP members to operate if they did not reveal their identity.

But the biggest reason the CCP is doing all it can not to be open in Hong Kong has to do with the “one country, two systems” principle. The Beijing authorities have always claimed that Hong Kong is run by Hong Kongers, and to publicly admit that there are tens of thousands of CCP members in Hong Kong — and that even the chief executive is part of this underground party — would be slapping itself in the face while giving the impression that Hong Kong is run by the CCP, which would go against the promise made to the international community.

However, since the anti-extradition law protests in 2019, Beijing has emphasised that Hong Kong has to be run by “patriots”, and there are growing voices in support of the CCP coming out or operating in the open in Hong Kong.

The fact is, many Hong Kongers who have gone through the Cultural Revolution and the June Fourth incident — the Tiananmen Square protests of 1989 — do not trust the CCP. And if the CCP came out in the open in Hong Kong, that would be a major psychological blow for Hong Kongers, and would lead to a huge social controversy.

One example happened back in 2011 with Lingnan University, when a candidate running for the presidency of the student union's executive committee, Liao Weiyi, was found to be a CCP member. The other union members on the ticket were shocked and withdrew from the election.

However, since the anti-extradition law protests in 2019, Beijing has emphasised that Hong Kong has to be run by “patriots”, and there are growing voices in support of the CCP coming out or operating in the open in Hong Kong.

Coincidentally, that same year at City University, four students in one of the three teams running for student office admitted to being former members of the Communist Youth League. This prompted a student protest on campus against the infiltration by the CCP into the student union and Hong Kong academia.

However, since the anti-extradition law protests in 2019, Beijing has emphasised that Hong Kong has to be run by “patriots”, and there are growing voices in support of the CCP coming out or operating in the open in Hong Kong. Last year, a group of “returning” businessmen with a mainland China background started the new pro-Beijing Bauhinia Party, and its sudden appearance sparked a lot of speculation that underground CCP members were starting to surface, to try and directly change Hong Kong’s political blueprint.

Gradually coming out in the open

The fact is, China’s rise in recent years has given it more confidence when facing other countries, and whether or not members of the Bauhinia Party are underground CCP members, it is just a matter of time before the CCP comes out in the open in Hong Kong. After all, the non-transparency of the CCP in Hong Kong is sparking more speculation among Hong Kongers, which is not good for the CCP’s public image. As some underground CCP members in Hong Kong say: they can be open with their identity in mainland China, so why do they have to hide their identity and activities in Hong Kong, like they are triad members?

Of course, if the CCP decides to come out in the open in Hong Kong, it is probable that they will start with revealing a few members, and then slowly become more transparent to win more support from Hong Kongers. And when Hong Kongers gradually get used to the CCP’s presence, the CCP will come out in the open completely. When that happens, Hong Kong’s political ecosystem will also see major changes.

Related: Overhaul of Hong Kong's electoral system: Is it still 'one country, two systems'? | Hong Kongers moving to Taiwan: Temporary haven or permanent home? | Hong Kong must be governed by 'patriots'. So who are the ‘patriots’?