“The new Cold War” is becoming a catchphrase for the state of relations between China and the US. But the China of today and the web of connections it shares with the US is very different from the former Soviet Union. Is calling the conflict a clash of ideologies oversimplifying the issue? Even further, is it in the US’s interest to do so to corral support for its actions against China at home and abroad? Zhu Ying examines the issue. 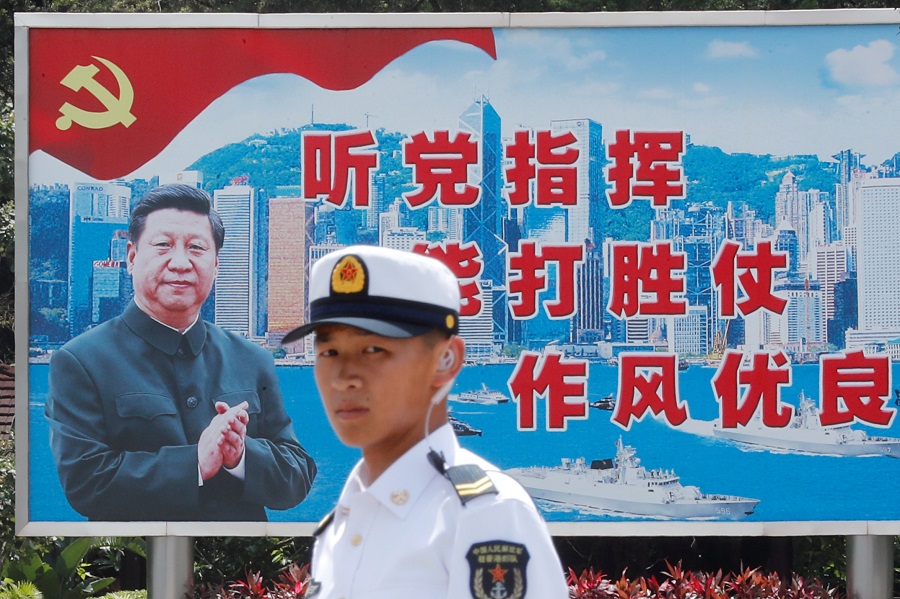 Grace Chong - 5 December 2022
Through the eyes of her cat Pudding, Beijinger Lorna Wei gives a snapshot of her daily life when her residential building went under lockdown last week.
Read more
Translated by Grace Chong on 5 August 2020

The new Cold War between the US and China is a result of different ideologies and political systems working against each other. Inevitably, ideology and ideological conflicts are coming under the spotlight in the global arena again.

After the end of the Cold War between the Soviet Union and the US, ideology did not pose an obstacle to the development of China-US relations. Deng Xiaoping’s “reform and opening up” reduced the ideological friction between China and the West. However, China’s path of “socialism with Chinese characteristics” would ultimately lead it to an ideological clash with the US. This trajectory bears the logic of historical development.

Currently, the US is using liberal democratic values to fight China and take the moral high ground of Western values. Ideology is being used as a weapon in US-China strategic competition to achieve three effects.

Distinguishing the CCP from the Chinese people

First, while the US is directly targeting the Chinese ruling party, it is in essence fighting against communism. The US government made a distinction between the “Chinese Communist Party (CCP)” and “China” for the first time when Vice President Mike Pence spoke about its China policy on 4 October 2018. Since then, it has referred to China as the “CCP”, while members of the Trump administration are increasingly referring to Xi Jinping as “general secretary of the CCP” instead of “Chinese president”, making it known that it is fighting against the Chinese ruling party — an enemy of Western values.

US Secretary of State Mike Pompeo pointed out on 30 October 2019: “We accommodated and encouraged China’s rise for decades, even when — even when that rise was at the expense of American values, Western democracy, and security, and good common sense.” Yet, China’s ruling party did nothing but challenge the US and the world in a bid to dominate the world. “We’re finally realising the degree to which the Chinese Communist Party is truly hostile to the United States and our values,” said Pompeo.

Miles Maochun Yu, US-based Chinese military academic and Secretary of State Pompeo’s principal policy and planning adviser on China, was the one who suggested distinguishing between the “CCP” and “China”.

Since then, the US government has followed through on its point of view to distinguish between CCP and China. More recently on 24 June 2020, US national security adviser Robert O’Brien said: “As China grew richer and stronger, we believed, the Chinese Communist Party would liberalise to meet the rising democratic aspirations of its people… We could not have been more wrong — and this miscalculation is the greatest failure of American foreign policy since the 1930s.” O’Brien asserted that because the US “did not pay heed to the CCP’s ideology”, the US did not understand the CCP in the past. His conclusion seems to be that the CCP’s ideology is a product of Marxism-Leninism and Chinese nationalism combined, and that American foreign policy failed due to misunderstanding the CPC’s ideology.

It is worth mentioning that Miles Maochun Yu, US-based Chinese military academic and Secretary of State Pompeo’s principal policy and planning adviser on China, was the one who suggested distinguishing between the “CCP” and “China”. In a 15 June article in The Washington Times, Pompeo said that Yu was a central part of his team who advised him on protecting Americans and securing their freedoms in the face of challenges from the CCP. US deputy national security adviser Matthew Pottinger also said he believed that Yu was an “an invaluable resource” for the Trump administration’s foreign policy team.

Yu said that the US government has been overconfident about its ability to influence the direction of China-US relations since diplomatic relations were established in the 1970s, and that the US has made two major mistakes...

Elsewhere in the article, Yu said that the US government has been overconfident about its ability to influence the direction of China-US relations since diplomatic relations were established in the 1970s, and that the US has made two major mistakes: one, it failed to distinguish between the Chinese people and the ruling CCP; and two, its political and policy elites failed ”to properly measure Beijing’s weaknesses and vulnerabilities and adopt sound policies accordingly“. In truth, said Yu, China was “extremely paranoid about confrontation from the West, especially the United States”.

Achieving bipartisan consensus in the US

Robert Daly, director of the Wilson Center's Kissinger Institute on China and the United States told the media that US government officials were not lying on the China issue and that what worried the US government the most was the CCP’s regime. He said in an interview with VOA Mandarin that “China is getting more aggressive internationally in a way that worries not only the United States but also probably other nations”. Furthermore, the CCP wants to influence the world with its thinking, and even dominate the world using communism. Those against such a trend must not tolerate this but instead resist it.

On the matter of “resistance”, we see for a fact that while Democrat and Speaker of the US House of Representatives Nancy Pelosi has heavily criticised Trump, she has never attacked him on the China issue. Senate minority leader Chuck Schumer, who is a Democrat, even said that if Trump tells his treasury secretary to label China as a currency manipulator, he would support that move.

Democratic presidential candidate Joe Biden stands in opposition to Trump. Notwithstanding, Biden announced his economic plan on 9 July, criticising China for its unfair trade practices including currency manipulation, anti-competitive dumping, state-owned enterprises’ abuse of power, unfair subsidies, overcapacity, intellectual property theft, and cyber espionage activities supported by the government. Trade policy experts pointed out that both presidential candidates have given the same analysis of trade issues between the US and China.

Third, the US is using ideology to persuade other Western countries to form an alliance with them to jointly fight against China’s ruling party. On 25 June, Pompeo urged European allies to “address that challenge [threat of the CCP] together” in his speech at the Brussels Forum 2020. In addition to announcing that the US has accepted EU High Representative for Foreign Affairs and Security Policy Josep Borrell’s proposal to create a US-EU Dialogue on China, Pompeo said that the US was “not forcing Europe to choose between the free world or China’s authoritarian vision”. However, China was “making that choice between freedom and democracy”.

Western countries are fighting against communism on the foundation of the ideology produced by Christian civilisation.

The UK’s China policy has also taken a turn for the worse as a result of Hong Kong’s national security law. The UK said on 14 July that it would remove Huawei from its 5G network. On the same day, it was also reported that the UK plans to deploy British aircraft carrier HMS Queen Elizabeth to the Pacific region. On 19 July, UK Foreign Secretary Dominic Raab spoke about “gross, egregious human rights abuses” against the Uighur community in Xinjiang and indicated that the UK does not rule out imposing sanctions on the perpetrators. On 20 July, the UK announced that it would suspend its extradition treaty with Hong Kong “immediately and indefinitely”.

Striking while the iron is still hot, Pompeo met with British Prime Minister Boris Johnson in London on 21 July to discuss China and other issues. Pompeo said at a press conference with UK Foreign Secretary Dominic Raab: “We want to see every nation who understands freedom and democracy and values that and knows that it’s important to their own people, their own sovereign country to be successful, to understand this threat that the Chinese Communist Party is posing to them....” He added that he hoped that they could build a coalition that understands this threat.

The UK has become an ally of the US in the China-US new Cold War. An ideological clash is also happening between Australia, Canada, Sweden, the Czech Republic, and China. Western countries are fighting against communism on the foundation of the ideology produced by Christian civilisation.

This is not just a repeat of history — ideological clashes between the Soviet Union and the US in the Cold War of the past will not simply be re-enacted in the new China-US Cold War. Be it the result of economic globalisation, or deepening dependency between the economies of China and Western countries, players such as France, Germany, and even Japan that is dissatisfied with China will not choose sides based on ideology alone. The entanglement of values and ideologies has already become a Gordian knot in France and Germany’s China policies, in much the same way it has in Wall Street and the Silicon Valley. The new China-US Cold War is much more complex than the Cold War between the Soviet Union and the US.

Related: Why did the US fail to contain Covid-19? | Where multiple 'gods' co-exist: Countering the racism complex in Western diplomacy | There will be no peaceful rise — China-US relations enters a new phase | The China-US trust war | Escaping the new Cold War: Fostering understanding between China and the West