Zaobao’s China Desk analyses the impact of the recent China Eastern Airlines crash, touted as China’s worst aviation disaster since 2010. This comes at a time when China has been improving its flight safety record and its airlines are struggling to recover from the losses suffered from the Covid-19 slowdown. Will the aviation industry regroup and come back stronger from this? 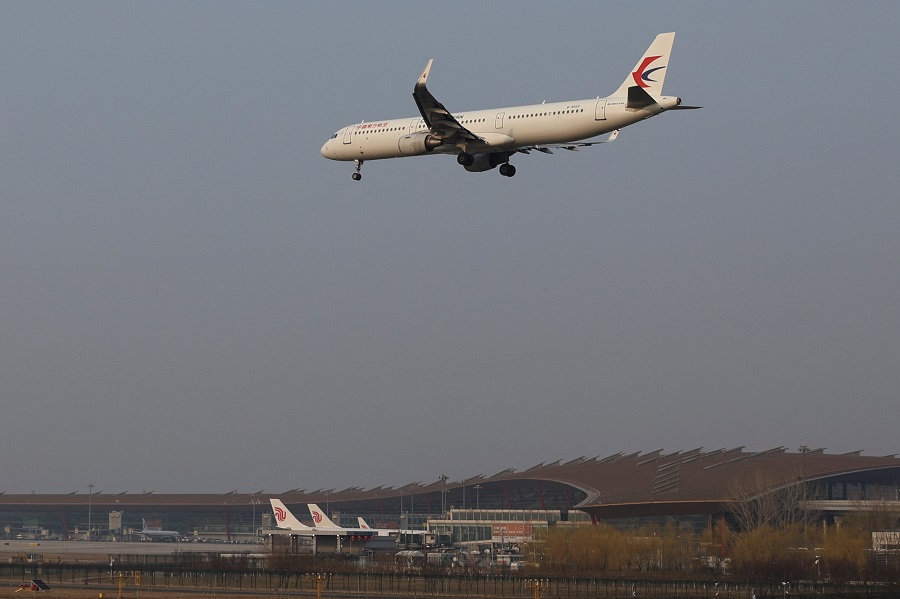 Grace Chong - 21 June 2022
Over the past several years, Chinese private firms have ferociously invested in India’s tech start-ups. Initially welcomed, China’s diversion of interest from erstwhile US investment has been viewed with some measure of suspicion since the Galwan Valley conflict. Are we living in a world where investment patterns are determined by statecraft? ISAS academic Karthik Nachiappan examines the issue.
Read more
Translated by Grace Chong on 5 April 2022

A China Eastern Airlines Boeing 737-800 plane flying from Yunnan’s Kunming to Guangdong’s Guangzhou crashed with 132 people on board in Guangxi’s Wuzhou city on 21 March, shocking China and the world.

This is a cruel turn of events from just a month ago when the Civil Aviation Administration of China (CAAC)’s newspaper (《中国民航报》) reported that China’s airlines have clocked in over 100 million continuous hours of safe flight, setting the best record for safety performance in the history of China’s civil aviation industry and the longest continuous safe flight record in world civil aviation history.

The cause of the crash remains unknown, but in the last two years, airlines in China and the world have struggled to maintain operations despite the pandemic. This latest incident has just dealt another blow to the already badly-hit aviation industry.

...some media have called the China Eastern crash the one that ended Chinese civil aviation's 4,227-day flight safety record.

Over the past decade, the flight safety record of China’s airlines has been among the best in the world. The overall crash rate has also been low. According to media reports, over 60% of every Chinese airline’s operations are involved in safety management and the proportion of aviation safety personnel is higher than other personnel. The safety production department also accounts for at least 60% of salaries.

This attention to safety came about through some painful lessons. During the early stages of China’s aviation development in the 1980s and 1990s, the country’s civil aviation record was nothing to be proud of. In particular, there were six major plane crashes in China between 1992 and 1999.

But following over three decades of development, especially in the last ten years, the flight safety record of Chinese airlines has been impressive. This is perhaps why some media have called the China Eastern crash the one that ended Chinese civil aviation's 4,227-day flight safety record. After all, the last Chinese civil aviation disaster was in 2010.

In August 2010, an Embraer E-190 regional jet flown by Henan Airlines from Harbin to Yichun crashed on its approach to Yichun airport when it was 690 metres from the runway, killing 44 people on board. Thereafter, the pilot was convicted of causing a major air accident and sentenced to three years in prison. This was also China’s first major court case involving an air accident.

Following that plane crash, Henan Airlines had to fork out a large compensation sum and Henan’s aviation development stalled for ten years. At the same time, the disaster also dampened the demand for domestic air transport in China in the short term, with monthly industry-wide passenger traffic down 10.67% in August 2010 and 14.21% in September 2010.

However, it is an indisputable fact that most Chinese airlines have been in the red over the past three years as a result of the Covid-19 pandemic.

After the plane crash, some we-media claimed that China Eastern Airlines has been severely curtailing its maintenance fees and cutting costs because of huge losses exceeding 10 billion RMB (roughly S$2.133 billion). They even suggested that this was the reason why the plane crashed. Such articles have since been taken offline.

A company official of China Eastern Airlines refuted the rumours on 21 March, calling the assertions false. He reiterated the airline’s commitment to providing safe and reliable maintenance engineering services, stating that relevant data and figures are clearly stated in annual reports. He added that maintenance costs have in fact risen by 12% in 2021 compared to 2019.

To lower operating pressures, China Eastern Airlines has tried various means to reduce costs. The airline announced a private offering of A-shares in November 2021, which raised roughly 10.828 billion RMB in funds. Back then, the airline said that once it reached its fundraising goal, it would reduce the company’s liabilities to assets ratio, improve solvency, reduce financial costs, further improve financial position and asset structure and help strengthen the company’s risk management capabilities to achieve long-term sustainable development.

It is expected that China Eastern Airlines, which is already facing turbulence, will be under greater financial stress following the crash. The airline’s Hong Kong-traded shares plunged over 6% after news of the crash emerged, and fell 2.55% on 22 March. Its US-listed shares plunged 18% premarket on 21 March, closing with a fall of 6.31%.

China Eastern Airlines has also grounded its entire Boeing 737-800 fleet. This decision alone will deal a big blow to the company.

The Boeing 737 has been one of the world’s bestselling planes over the past 50 years. In China, the Boeing 737 is mainly used in short- and medium-haul flights. It is also the mainstay of several major Chinese airlines.

As single-aisle passenger aircraft, the Boeing 737-800 and Airbus A320 family are the main models in China and the global civil aviation market. According to figures from third-party aviation information platform Flight Master, as of the end of February this year, there are 1,189 registered 737-800s among the passenger fleet in China, including over 20 airlines such as China Southern Airlines, Hainan Airlines, XiamenAir and Air China — China Eastern Airlines has 107 of them.

When it comes to the safety record of Boeing 737s, people are more familiar with the two crashes in October 2018 and March 2019 involving the 737 MAX model, operated by Indonesia’s Lion Air and Ethiopian Airlines.

Investigations showed that both incidents might have been due to malfunctions of an automated system called MCAS, designed to help the plane avoid stalls. Deliveries and operations of the 737 MAX were halted in many countries, including China, beginning six quarters of losses for Boeing.

It was not until November 2020 that aviation and transport agencies in the US, Canada and Europe lifted suspensions on the 737 MAX. In August last year, a test flight of a 737 MAX was conducted in China. The aircraft was recertified in early December 2021 although it is not yet back in service.

The 737-800 involved in the latest crash and the previously suspended 737 MAX are completely different types of aircraft, even though they both belong to the 737 family. But whether the -800 or the MAX, in view of the crashes, Boeing cannot stand aloof.

These errors included forgetting to engage the second engine on takeoff, realising that the wheels were not lowered for landing and having to pull out at 240 metres above the ground, and flying in the wrong direction after takeoff.

The impact of the pandemic on the aviation industry

It is obvious that more than two years of the global pandemic has dealt a serious blow to the aviation industry, along with a significant impact on aviation safety.

In October last year, Zaobao reported that many countries had relaxed entry restrictions and increased flights, but pilots were also making mistakes on returning to the cockpit after a lengthy break. In the US alone, pilots reported in confidence dozens of errors within a few months.

These errors included forgetting to engage the second engine on takeoff, realising that the wheels were not lowered for landing and having to pull out at 240 metres above the ground, and flying in the wrong direction after takeoff.

These pilots all came back to the cockpit after months away from work. Fortunately, they discovered and corrected their errors in time to avoid disaster.

Bloomberg reported that the pandemic led to a sharp drop in demand for the travel industry, with some 100,000 pilots globally working skeleton hours or put on unpaid leave, and many who had not flown for more than 18 months.

In fact, besides pilots, the volume of work for other flight crew, ground crew, and security personnel is also not as it used to be, and to some extent, they may also make mistakes in their processes.

As the cause for the crash has not been announced, the effect on China Eastern and Boeing is still not clear. However, there are analyses that no matter what the cause, the crash and the pandemic together will have a profound impact on China’s civil aviation industry.

The growth in local virus cases has brought China’s daily average number of air travel passengers from over 800,000 in early February to below 300,000 now.

Reports by two Chinese securities research firms said that in the short term, the fear caused by the crash might affect confidence in travelling and lead to a drop in demand. In the mid- to long term, safety and how the pandemic develops will be the two core factors in demand recovery.

The growth in local virus cases has brought China’s daily average number of air travel passengers from over 800,000 in early February to below 300,000 now. Coupled with the impact of the latest incident, it is likely that the aviation market will continue to be depressed in the short term.

The report also said some pilots might be suspended and investigated, while aviation companies will have stricter regulations on scheduling, bringing in aircraft and pilot training, reducing growth in transport capabilities. Some small and medium airline companies might face tighter finances, increasing the probability of industry consolidation.

Before the pandemic broke out in 2019, China’s daily average number of air passengers was 1.77 million; the current figure is less than 20% of that.

Before the pandemic broke out in 2019, China’s daily average number of air passengers was 1.77 million; the current figure is less than 20% of that.

There is still some time to go before the pandemic ends and China reopens. With this sudden air crash, the aviation industry might face major changes. For China’s aviation industry, this winter has gone on for too long.

Related: What it's like to travel to Shanghai during the pandemic | Hit by the pandemic: Foreign companies in China struggle with regulations and policies | From supply chain to BRI, a super-connected China impacts the world