China’s coal and electricity shortage last year and the current impact of the Russia-Ukraine war on global energy supply have highlighted China’s energy security concerns and the risks to fulfilling its climate goals. Nevertheless, while EAI academic Chen Gang believes that China is unlikely to significantly reduce its consumption of fossil fuels in the short term, he notes that there remain several drivers that will accelerate China's clean energy transition. 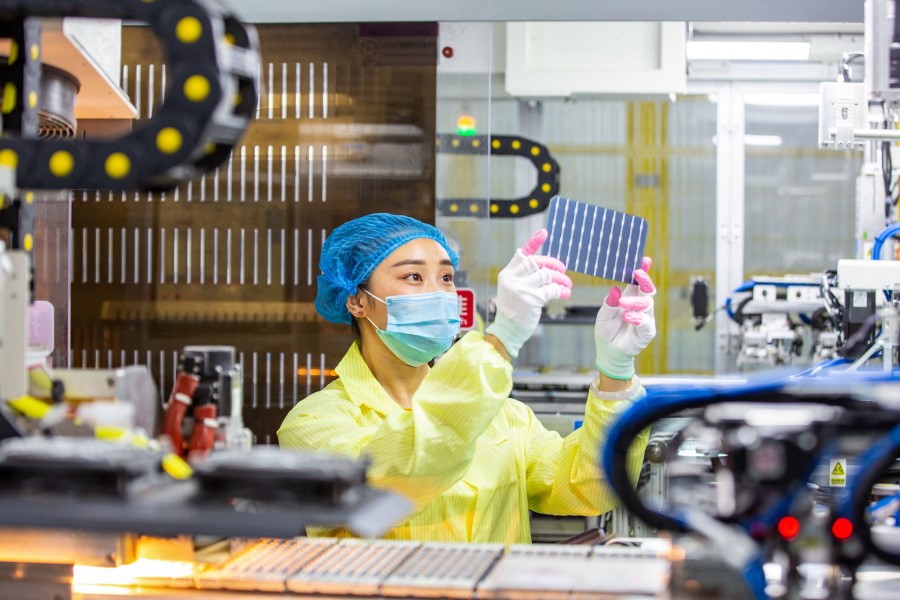 An employee works on solar photovoltaic modules at a factory in Hai'an in China's eastern Jiangsu province on 15 November 2021. (AFP)

Candice Chan - 20 June 2022
The Fujian, China’s third aircraft carrier, was launched on 17 June. The highlight is the electromagnetic catapult system for launching aircraft, which could put it on par with much of the US’s cutting-edge technology in the field. Zaobao correspondent Yu Zeyuan takes a closer look at the implications of this development.
Read more
Translated by Candice Chan on 12 April 2022

Since Chinese President Xi Jinping’s announcement in 2020 of China’s aim to achieve carbon neutrality before 2060, local governments and departments across China have started to give more prominence to energy conservation, emission reduction and the development of various renewable energy policies.

However, amid mounting downward pressure on China’s economy and bottlenecks in the use of renewable energy sources, China is unlikely to significantly reduce its consumption of fossil fuels such as coal and crude oil in the short term. During the sudden shortage of coal and electricity last year, China even had to increase its production and import of coal over the short term to stabilise electricity production and supply, and avoid power cuts and rationing.

Recently, however, the Chinese government reiterated the importance of its low-carbon energy transition and introduced numerous important documents and related plans. It placed unprecedented importance on developing green energy and achieving green development, and supplemented them with policy details. The acceleration of China’s renewable energy development is not only closely related to the existing carbon neutrality goal and peak emissions target but is also significantly affected by rapid changes in the international situation.

... soaring global crude oil prices have brought about a huge economic cost to the country and could further slow its economic growth.

Russia is one of the world’s largest exporters of crude oil and natural gas. But the global energy supply landscape is undergoing dramatic changes because of the sudden outbreak of the Russia-Ukraine war, and prices of crude oil and natural gas have skyrocketed as a result. In comparison with the low crude oil prices in 2020 when the Covid-19 pandemic just broke out, current prices have soared to over US$100 per barrel. As the Russia-Ukraine war continues on and brings about great uncertainty, crude oil prices are unlikely to fall significantly in the short term.

As China is the world’s largest importer of crude oil, importing over 70% of its total crude oil supply, soaring global crude oil prices have brought about a huge economic cost to the country and could further slow its economic growth. Rising natural gas prices have also impeded the use of this relatively cleaner fossil fuel (as compared with coal and crude oil) in China, while recent geopolitical tensions highlight the urgency of energy security issues.

As the world’s second largest economy, China still needs to achieve its growth target of 5% or more that was proposed at the “Two Sessions” this year. Additionally, it needs to maintain this growth rate for years to come in order to “basically achieve socialist modernisation” by 2035. Since energy is an essential and important driver of economic growth for any country, the energy supply must be stabilised first to ensure steady growth.

... China will certainly strengthen its development of non-fossil energy sources such as wind, solar, hydroelectric and even nuclear energy, as well as enhance the use and popularity of electric and hydrogen vehicles to reduce its reliance on imported fossil fuels

Due to geopolitical factors, the current global crude oil market is highly volatile, causing energy security concerns in China. As a result, China will certainly strengthen its development of non-fossil energy sources such as wind, solar, hydroelectric and even nuclear energy, as well as enhance the use and popularity of electric and hydrogen vehicles to reduce its reliance on imported fossil fuels.

As climate change is posing an increasingly tough challenge to human survival and development, climate politics has been elevated to an unprecedented level in global governance. Regardless of their stage of development, more and more countries are talking about carbon neutrality as an objective. As a responsible power, China has to come up with a more ambitious low-carbon objective.

At the COP26 climate summit in Glasgow in November 2021, China committed to raising the share of non-fossil fuels in primary energy consumption to 25% by 2030, from the previous target of 20%. In the following month, China’s Ministry of Industry and Information Technology released its five-year plan and roadmap for the green development of its industrial sectors, to achieve a carbon peak for the industrial sector, move faster on lowering carbon emissions, and shift towards clean energy consumption. Carbon dioxide emissions will be cut by 18% by 2025, while the consumption of new energy vehicles, photovoltaic (PV) products and green consumer electronics will be expanded.

And while the process has been accelerated by the tense international situation and the urgency of climate change, there will be no fundamental change in the reliance of China and the world on fossil fuels for some time to come.

In March this year, China’s National Energy Administration released its work plan on clean energy consumption, calling for the share of non-fossil fuel in total energy consumption to be raised to 17.3%, and wind and PV power generation to account for about 12.2% of China's total electricity consumption within this year. This work plan reflects the urgency of climate change and energy security.

It has been more than eight years since China launched its Belt and Road Initiative (BRI), which has become increasingly “green”. Energy projects have always been a major focus of BRI projects, accounting for a third of the projects. Furthermore, in 2021 Chinese President Xi Jinping announced that China will no longer build new coal-fired power projects abroad. This means that most BRI energy projects will be clean energy projects such as wind and solar energy, in line with China’s current shift towards clean energy. In addition, other BRI infrastructure projects will also be increasingly about adapting to and handling climate change, such as improving facilities in farming and healthcare.

However, whether within or outside of China, energy transformation is a long and difficult process that cannot happen overnight. And while the process has been accelerated by the tense international situation and the urgency of climate change, there will be no fundamental change in the reliance of China and the world on fossil fuels for some time to come.

The proliferation of new energy depends on the determination of governments and communities in pushing for clean energy use, as well as technological breakthroughs and the cost of using traditional energy. The higher the cost of traditional energy, the greater the resolve to shift towards new energy. Given the current high prices of oil and coal, this is undoubtedly a good opportunity to expand the use of clean energy.