Chinese academic: It’s time to make the US safe for the world

The US has said that withdrawing from Afghanistan will give it more bandwidth to deal with Russia and its “serious competitor” China. The latter in particular, has become a key target. Chinese academic Wang Zhengxu asserts that the US should learn from its Afghanistan experience that the military option should only be used in self-defence. If it gets involved in China’s core concerns and insists on building an anti-China alliance, China will bristle and regional instability can only increase. 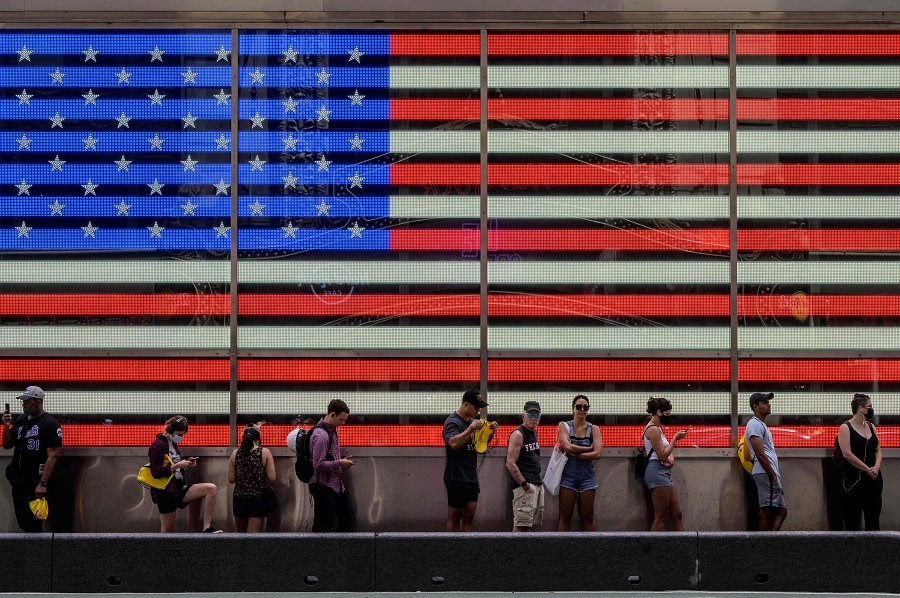 People queue to board a tourist bus before a display showing a US flag in Times Square in New York City, US on 30 July 2021. (Ed Jones/AFP)

Grace Chong - 28 June 2022
While some pundits have it that Iran sees gaining full membership of the Shanghai Cooperation Organisation in terms of geopolitics, Fan Hongda thinks that the more bread-and-butter concern of strengthening economic and trade cooperation is on its mind. But this is not to say that Iran does not harbour ambitions of playing a greater regional role.
Read more
Translated by Grace Chong on 14 September 2021

As the US commemorates the 20th anniversary of 9/11, it must reflect on its failed 20-year war effort in Afghanistan. It should come to the realisation that military power should only be developed and deployed for self-defence purposes.

The post-Cold War history of US foreign policy has been one of reckless global military adventurism — from the bombing of Yugoslavia in 1999 to the retreat from Afghanistan in 2021. The cost of maintaining these operations has finally become unbearable.

The financial cost for these war acts are in the trillions — the size of many a country’s GDP over several years. The US has lost American servicemen and women in the thousands too.

But the greater loss befalls the people of the countries in which the US took its military action. The devastation of domestic order and the social and economic life of these countries is huge.

It is believed that since US troops entered Afghanistan, over 30,000 civilians have lost their lives in bombings, as a result of the war, or being killed by American soldiers. Over 60,000 were injured, and roughly 11 million people became refugees.

The Iraq War led to 200,000 to 250,000 civilian deaths and left behind 25 million mines and other explosive remnants. The US’s military operation in Syria also created five million refugees who had to flee the country.

It is thus necessary for the US and the world community to realise that no country should be allowed to go around the world applying its military might at will.

Military action should be for the purpose of defence

While the US had gone to these places ostensibly to fight terrorist groups and topple oppressive regimes in order to make the world safe for the US, I would suggest that it is also imperative that the US also be made safe for the world.

And the key is to forfeit the use of the military as a tool to solve problems. Any country should acquire and maintain its military capability for defensive and not offensive purposes.

It is true that every country has the responsibility to contribute to global order and peace, and big powers should carry heavier responsibilities in that regard. But to help the world achieve peace, prosperity and good governance, military actions will always be inadequate, if not disastrous.

In a recent speech, the British Member of Parliament Zarah Sultana criticised her government for entering the war in Afghanistan. She hoped her government and her people had now learned that democracy “cannot be bombed into existence”.

Yet, the sad truth is, while the US claimed that its military actions in places such as Iraq and Afghanistan were for democracy and women’s rights, they were in fact acts of reproducing US dominance in various regions in the world. And that is why the US is now facing the aftermath of its “Saigon moment” type of withdrawal from Kabul, and being criticised for its lack of resolve and double standards.

The global community does shoulder the responsibility to protect, but this should not be hijacked by any individual power or a small group of countries.

Global community must be involved

Then, there is the question of whether a great power should commit itself to universal principles and world safety and order. The answer is yes, and in fact, it is not just for great powers; every country and individual should be part of this.

The question is not whether it should be done, but how it should be done. And the crux of the issue is this: events and problems taking place in another country should not be the pretext of military intervention by any other country, however powerful and self-righteous it believes itself to be.

China's idea of non-intervention is not a proposal of non-action, but a rejection of unilateralism and disrespect for sovereignty. External support, not to mention intervention, should take place at the request of the country in question, with the consent of the country and its people.

When such explicit requests or invitations are missing, there needs to be a multilateral mechanism to form a global consensus regarding the need, the method and the degree of intervention. The global community does shoulder the responsibility to protect, but this should not be hijacked by any individual power or a small group of countries.

It is for such a reason that institutions advocating multilateralism such as the United Nations should be enhanced at a time when we are facing challenges from many fronts globally.

Even though the US has extricated itself from Afghanistan, it is now targeting China as its top competitor and rival, and it is unsurprising that future military build-up and military tensions would be directed at China. The US government also appears to have fallen captive to its military-industry establishment, so that it has allowed itself to be entrenched in a state of permanent war or in search of a new war.

The US has highlighted China’s threat to the region and blamed China for being “assertive” and “aggressive”, hoping that countries in this region will welcome America’s strong military presence. Anxious about China’s rise, the US is also busy building an anti-China alliance to contain China. However, there is a difference between maintaining a regional balance of power and undermining China’s position or containing its regional space.

China's security concerns need to be respected to avoid escalating US-China tension that could threaten regional peace. For China’s part, its ambitions are limited to its territorial integrity as it pertains to what it regards as Taiwan province, the South China Sea, and the Diaoyu islands. These are no-go areas and the US must not pressurise China on these issues in exerting its dominance in the East Asia region.

China needs to be on good terms with its neighbours, just as the US needs to be sure that Mexico and Canada will not be turned into anti-American forces.

The US’s activities, in the name of upholding democracy in Taiwan and free navigation in the South China Sea, are in fact undermining China’s sovereignty and security interests. The US is also working to turn China’s neighbours into a member of the US’s anti-China alliance, or threaten countries that befriend China.

In this regard, the US appears to lack what the Singaporean founding father Lee Kuan Yew called “depth” in conducting international affairs. China needs to be on good terms with its neighbours, just as the US needs to be sure that Mexico and Canada will not be turned into anti-American forces.

China will only be increasingly wary of its own safety if the US continues to build up an anti-China alliance. That is why the US’s so-called Indo-Pacific strategy will only exacerbate regional geopolitical risk.