A Chinese professor in the US: Helping my son find his cultural roots

While second-generation Chinese immigrants are not better placed to immerse in the Chinese language and culture compared with their peers in China, US academic Wu Guo believes that they can still leverage their parents’ experiences, their advantage in the English language, and access to information and multiple perspectives to learn about their ancestral land. 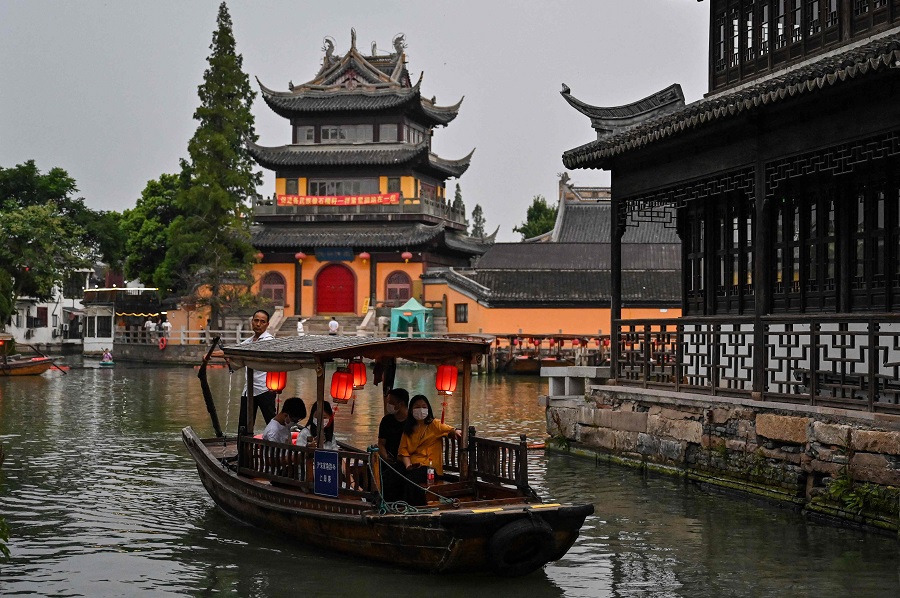 This photo taken on 24 July 2022 shows a man sailing a boat with tourists along a channel in the Zhujiajiao ancient water town in Shanghai, China. (Hector Retamal/AFP)

Grace Chong - 25 November 2022
China’s resurgence of Covid-19 infections has widened the gap between the young workers opposed to the tightening of controls, and the older generation that feel safer with strict measures in place. Given that the elderly make up a high proportion of the Chinese population, Chinese authorities seem to be holding fast to the dynamic-zero policy. Zaobao correspondent Wong Siew Fong tells us more.
Read more
Translated by Grace Chong on 24 August 2022

Chinese immigrant parents in non-Chinese-speaking countries often find it difficult to help their children learn their mother tongue and become fluent in the language.

I once heard a Hong Kong immigrant in the US say in Mandarin, “We are Chinese, our children must learn Mandarin.” A Taiwanese immigrant also shared that her children “earned” their meals by speaking Mandarin, thus forcing them to become familiar with the language. I truly admire their efforts.

The US environment and working language undoubtedly affect the Mandarin proficiency of US-born children of Chinese immigrant families, or those who arrived in the US before the age of ten.

In fact, the environment rather than their parents is often a larger influence on youth language fluency. Even when moving to another province within China, Chinese parents can never get rid of their accent, but their children will easily pick up the local dialect at school.

Most second-generation Chinese immigrants I’ve come across instinctively express themselves in English even though they study Mandarin at Chinese schools. But there are also those who study and research Chinese arts in spite of their poor command of the language.

It is not just second-generation Chinese immigrants who face difficulties in learning Chinese. Even those who only arrived in the US for tertiary studies and later settled down in the country are more inclined to speak English.

Based on my interactions on social media, I found that Chinese friends who came to the US for graduate studies would speak Mandarin in their casual conversations and only use English as a working language. Younger friends who did their undergraduate studies in the US, however, would use English in their everyday conversations even if Mandarin was still spoken at home.

As the environment plays a crucial role in shaping language habits, it is virtually impossible for second-generation Chinese immigrants to master speaking and writing Chinese perfectly unless they live in a Chinese-dominant community. But my friends in China can hardly fathom the impact of such environmental factors and insist that second-generation Chinese immigrants should speak Mandarin as fluently and naturally as the children in China.

In fact, many second-generation Chinese immigrants have also grown to have a phobia of writing Chinese. I have also heard Taiwanese parents complaining about the inadequacy of Chinese teaching materials in Chinese schools in the US. For example, it is difficult for children who grew up with vacuum cleaners in the US to grasp the concept of “sweeping the floor” (扫地).

Aside from learning the language, I believe that Chinese immigrant parents should place some emphasis on cultivating in their children a comprehensive understanding of China.

Leveraging English as the first language

Another thing that the people living in China do not understand is that, in the US’s multicultural environment, if parents do not force their children to master Chinese, it would be relegated to just one of the many foreign languages they can choose to learn. Chinese immigrant children could be more attracted to learning the more widely used Spanish or the more popular Japanese.

Aside from learning the language, I believe that Chinese immigrant parents should place some emphasis on cultivating in their children a comprehensive understanding of China. Such understanding should extend beyond the learning of the language for communication purposes or the staunch belief that “the only way to understand a culture is through its language”.

Leveraging the fact that they speak English as their first language, Chinese immigrant children could gain a broader and deeper understanding of Chinese history, geography, politics, society, thought and other aspects of China through English. Due to the free flow of information in Western society, Chinese immigrant parents can guide their children in gaining an all-round understanding of China through various mediums. Such deep understanding cannot be replicated by Chinese schools that merely aim to teach the language and basic Chinese culture.

Beyond the limitations of language and perspectives

Rather than solely relying on Chinese schools, Chinese immigrant parents could use their well of experience and perspectives to teach their children about China and the cultural differences between China and the West. They should also help their children foster an appreciation of a multicultural world, forge progressive values of freedom and inclusion, as well as develop a deeper and more empathetic understanding of their motherland and its culture, history and modern transformation than the average American.

Unfortunately, for various reasons, my 14-year-old son is not very fluent in Chinese. However, he is incredibly curious about China. During the long summer breaks, I would answer his myriad of questions about the history of the Hong Kong issue, the Cultural Revolution, the emergence of Neo-Confucianism overseas, the Hanfu Movement of contemporary Chinese youths, the relationship between Han Chinese and ethnic minorities, the origin of Hakka culture, the Belt and Road Initiative, and more.

He also developed an interest in many more China-related topics and started taking the initiative to improve his Chinese vocabulary and expressions to enhance his online searches.

He proactively reads up on these topics online and especially admires modern New Confucianism philosopher Mou Zongsan. I would feed his curiosity by helping him in his research, finding videos, explaining concepts and offering views. I also encourage him to break free from the limitations of English media to look at perspectives from inside and outside of China and analyse the difference between Western and Chinese perspectives.

Before the pandemic, we made two visits to China and visited famous sites. My son was able to grasp the Chinese way of life, as well as the differences between urban and rural areas, and the north and south. We saw how China has progressed but also areas that needed improvement.

In this short respite from solely learning Mandarin, my son could somewhat identify with the Chinese way of life that embraces the notion of living among and enjoying the crowds, and came to revel in the pedestrian streets in various Chinese cities. He also developed an interest in many more China-related topics and started taking the initiative to improve his Chinese vocabulary and expressions to enhance his online searches.

I also introduced classic Hong Kong films as another way to guide him through the Chinese world. Stephen Chow’s comedy movies are not only fun but the subtitles also expose children who cannot read Chinese to Mandarin or Cantonese. In our daily lives, I also make sure that we eat a combination of Chinese and Western food so that he will grow to appreciate Chinese dishes, Chinese tea and other popular beverages. The wordings on food packaging can also help him recognise Chinese characters.

While passing down the culture and language of one’s motherland from generation to generation while living in a foreign country will always be a challenge, these are just some of the ways I have tried to do so.

Indeed, there are other ways to get closer to a language and its culture without being obsessed with the language-learning task, and these include leveraging the parents’ personal experiences and multilingual ability to engage in honest conversations with their children, guiding them to look at a multifaceted China in a rational and analytical way, and helping them to develop a deep understanding and lasting interest in China as well as a connection to its culture.

In this way, second-generation Chinese immigrants will not be defined as a “banana” (Asian Americans who have assimilated into Western culture and do not conform to traditional East Asian cultures).

As this is beyond the curriculum of most Chinese schools, parents would need to devote more time and energy to teaching their children. Also, regardless of how first-generation immigrant parents define their own identities — whether they identify as Chinese American or a true-blue Chinese person — their children should be allowed to form their own identities without any interference.

Related: US academic: Learning Chinese is another political battleground for China and the US | Price of the American dream: Do immigrants have to forget their past? | How to solve the Chinese headache of learning English