Chinese researcher: Is it appropriate to address Mao Zedong as 'the older generation' of leaders?

Researcher Chen Hongbin notes that the Chinese are very particular about generational hierarchy within the family, clan or society. How people address one another in China is a form of etiquette, and using the appropriate terms is a mark of respect, especially when it comes to major national events and honouring historical figures. He says it is no longer appropriate to address Mao Zedong and his generation of CCP revolutionaries as "the older generation" (老一辈), as they were born at least 60 years before the current generation of Chinese leaders. 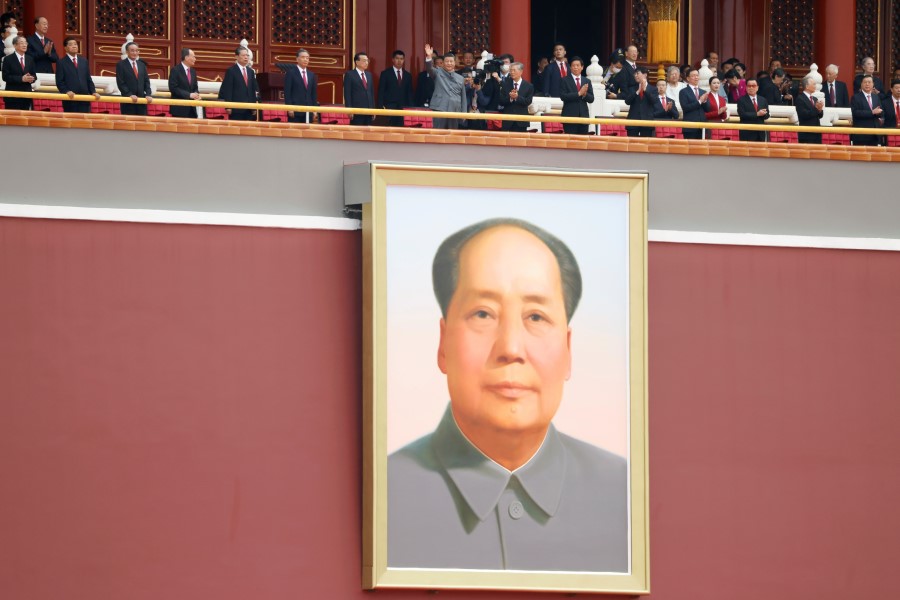 Chinese President Xi Jinping waves above a giant portrait of late Chinese chairman Mao Zedong at the end of the event marking the 100th founding anniversary of the Communist Party of China, on Tiananmen Square in Beijing, China, 1 July 2021. (Carlos Garcia Rawlins/Reuters)

Candice Chan - 30 January 2023
A mall in Shenzhen came under fire for putting up white lanterns with black text as part of its Chinese New Year decorations, while an “ugly” rabbit-shaped light decoration was removed from another mall in Chongqing. Academic Zhang Tiankan muses on tradition and innovation, and the evolution of traditional decorations.
Read more
Translated by Candice Chan on 15 July 2021

China places a strong emphasis on defining generational hierarchy (辈分), which over thousands of years has become an important part of Chinese culture. If someone oversteps the line of generational hierarchy, it is seen as going against the natural order — being immoral or unethical, even.

Because generational hierarchy is so important in Chinese society, the Chinese spend a lot of time and effort on getting titles and addresses right. The complexity and precision of what to call one’s relations in the Chinese language is unrivalled anywhere else in the world, resulting in the need for encyclopedias and references and illustrated guides. Doing all this is not superfluous; it effectively resolves issues of status based on position or experience, and helps establish stability in the family and even society.

The importance of generational hierarchy

In traditional Chinese culture, family culture takes an important role, and at its core is the culture of generational hierarchy. Counting from and including the self, the four generations before and after form the nine generations of one’s family or clan, from great-great-grandparents to great-great-grandchildren. Even children in kindergarten sing a song: “Father’s father is grandfather (爷爷, paternal grandfather), grandfather’s father is great-grandfather (太爷)…” Catchy children’s songs like this one get the next generation to be clear about their blood relations through seven generations of the family, so that when they go out in society they can extrapolate the logic to non-familial social hierarchies without getting mixed up.

Confucius wrote in the Analects that after drinking with others on his travels in the countryside, he would always wait for the older generation to leave before leaving himself. The Di Zi Gui (《弟子规》, lit. Standards for Being a Good Pupil and Child) also has very detailed rules on how the younger generation should respect the older generation, for example, bowing on meeting the older generation, and standing back respectfully when one is not being spoken to by the older generation. This sort of awareness about generational hierarchy is a basic social quality that one should have from young; it is the basis of etiquette. Being conscious of and having an accurate grasp of status when speaking to others is the way it should be.

If we consider a generation to span about 30 years, the current leaders are two whole generations younger than the first generation leaders. Referring to Mao and others as “the older-generation” revolutionaries at such a grand event is a bit inappropriate...

However, at one of China’s most important occasions — the Chinese Communist Party’s (CCP) 100th anniversary celebrations held at Tiananmen Square on 1 July — Xi Jinping said early on in his keynote address: “Let us take this moment to cherish the memory of comrades Mao Zedong, Zhou Enlai, Liu Shaoqi, Zhu De, Deng Xiaoping, Chen Yun, and other veteran [i.e. 老一辈, “the older generation" of] revolutionaries who contributed greatly to China's revolution, construction, and reform, and to the founding, consolidation, and development of the Communist Party of China… Their great contributions to our motherland and our nation will be immortalized in the annals of history, and their noble spirit will live on forever in the hearts of the Chinese people.” Also, at the opening of each CCP National Congress, the moderator invites all participants to rise and observe a moment of silence for Mao and other “older-generation” proletariat revolutionaries and revolutionary martyrs.

Now, here is the problem. Mao, born in 1893, was the central figure of the first-generation CCP leaders. Other leaders included people like Zhou Enlai and Liu Shaoqi, who were slightly younger than Mao, as well as Zhu De, who was older. But Mao’s age is generally taken as the average age of the first generation leaders as a whole. And the leaders who came out of the CCP’s 19th National Congress — the current CCP Politburo Standing Committee members — were all born in the 1950s. Their central figure Xi Jinping was born in 1953, making it a 60-year gap between him and Mao. The seven standing committee members are on average slightly younger than Xi.

If we consider a generation to span about 30 years, the current leaders are two whole generations younger than the first generation leaders. Referring to Mao and others as “the older-generation” revolutionaries at such a grand event is a bit inappropriate, like a bunch of kids addressing the ancient Greeks as “uncle”, which would be shocking. Take Mao’s eldest son Mao Anying for example — he was born in 1922, so which generation would he and the children of the other revolutionaries belong to?

All this started with the CCP’s 11th National Congress after the Cultural Revolution, and has been passed down since. From Mao’s designated successor Hua Guofeng to the CCP’s top leader Hu Yaobang, and including Jiang Zemin, who went on to become China’s top leader — they were all born before July 1921 when the CCP was established. They were about the same age as Mao Anying, and just one generation removed from Mao Zedong and the other late leaders, so it would be a matter of course for them to refer to Mao and the other leaders as “the older-generation” revolutionaries.

Once an older friend of mine followed his leader’s example in addressing Zhou Enlai’s wife Deng Yingchao as “big sister Deng”, only for him to be lectured by his leader...

However, the forms of address to distinguish generational hierarchy change with people and the times. What was appropriate for the leaders of 30 years ago is inappropriate for today’s leaders and needs to be promptly adjusted, otherwise people would be puzzled. The rules cannot be followed blindly or applied down through generations; they have to change with the times. Once an older friend of mine followed his leader’s example in addressing Zhou Enlai’s wife Deng Yingchao as “big sister Deng”, only for him to be lectured by his leader: “Nonsense! You think you get to call her ‘big sister Deng’ as well, do you?”

Seniority maintains, but names change with the times

Not only is generational hierarchy important, traditional Chinese culture also gives a lot of weight to seniority and age. For example, Mao Zedong’s nephew Mao Yuanxin once called military leader Peng Dehuai bobo (伯伯, elder uncle), and Peng corrected young Mao to address him as shushu (叔叔, younger uncle), because Mao Yuanxin’s father Mao Zemin was two years older than Peng. With such importance attached just to age, of course one cannot be careless when it comes to generational hierarchy.

Referring to Mao Zedong and other pioneer leaders as “first-generation proletariat revolutionaries” would settle the question of generational hierarchy.

Then how do we get around inappropriate addresses? Because in real life, determining generational hierarchy according to age is a grey area. Should someone who is about ten years older or younger than yourself be considered the same generation or not? This is a tough question for most people. So, how about avoiding it altogether? Referring to Mao Zedong and other pioneer leaders as “first-generation proletariat revolutionaries” would settle the question of generational hierarchy. That way, years and generations later, there would still be no problem with this approach and it could be used down the line.

But such rhetoric is limited to major occasions that usually happen once every few years, and the next time is probably the CCP’s 20th National Congress next autumn. Events that include such rhetoric are among China’s biggest, with hundreds of millions of viewers tuning in to live TV broadcasts. Needless to say, these events have a huge impact on China and even the international community. And given that China is a country that puts so much emphasis on etiquette, it cannot take such things lightly but has to give it due attention. That is the way to show respect to Mao Zedong and the other revolutionaries who have passed, and set an example for the party and country.

Related: The most outstanding of CCP leaders? | A secretive centenary celebration: Can the CCP be more open? | Young Chinese academic: Imagining a future China as the CCP celebrates its centenary