Chinese spirituality [Part one]: Reawakening of the heart after trauma

Spirituality helps individuals cope with severe trauma and aids their growth and psychological well-being in the aftermath of a crisis. Such ballast is something humanity badly needs in the face of a pandemic. Dr Chang Weining, visiting psychologist of the Institute of Mental Health, ponders China’s search for spirituality in times of distress. In part one of her article, she recalls her visits to China in 1984 and 2008 — both different periods in China’s reform and opening up — where she got a sense of China’s budding need and search for spirituality. 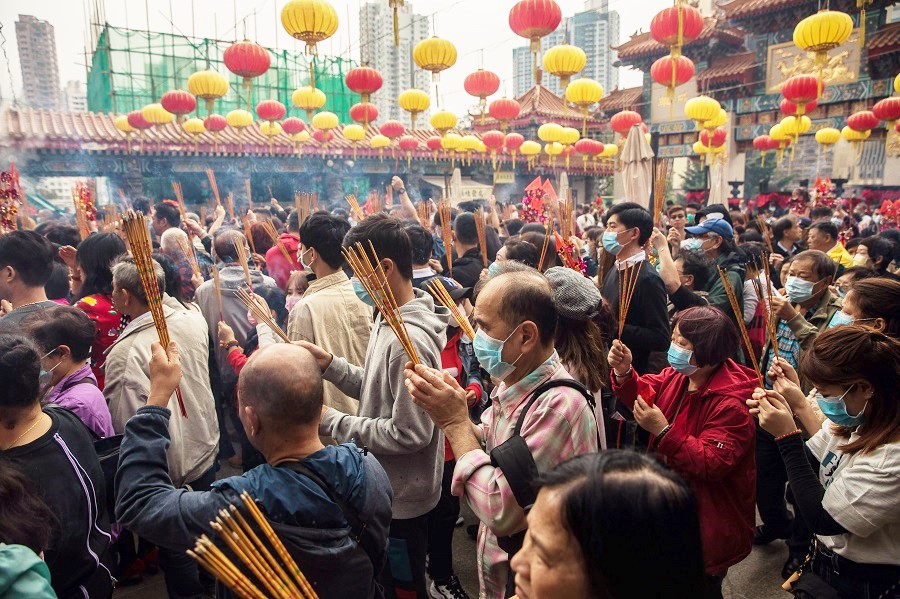 Seeking spirituality is a universal human need. In this photo taken on 25 January 2020, people wearing face masks visit Wong Tai Sin temple on the first day of the Lunar New Year of the Rat in Hong Kong, as a preventative measure against the Covid-19 coronavirus. (Dale De La Rey/AFP)

Grace Chong - 1 July 2020
Japan-based academic Zhang Yun says America's global strategy to create a unipolar order during the post-Cold War period is a mistake. But it does not mean that it has lost its window of “strategically opportune time” to be a great country. In asking "Who lost the US?" and "How America can truly be great again?", he comes to the conclusion that a great America will not only benefit itself and the world, but be in the interest of China.
Read more
Translated by Grace Chong on 21 January 2020

The year was 1984, eight years after the devastating Cultural Revolution had come to an end. The China we visited was bleak and impoverished in body and spirit. Any spiritual pursuit other than Maoist worship was banned. Temples were destroyed while treasured religious artefacts were burned or destroyed. Heads of Buddhas were savagely cut off and murals disfigured. Cultural and creative activities outside of the government-controlled system were brutally suppressed. Individual autonomy and freedom of thought were considered “anti-revolutionary”.

Reawakening of the heart and mind beyond official ideology

It was also during this period that China started embarking on economic reform in the rural areas. Farmers could cultivate private plots of land, grow their own farm produce and be responsible for their own profit or loss. The farmers had to think independently and use their own judgement to direct their productive effort.

The radio in our tour bus was broadcasting the planned industrial reform with an open-door policy. With their shackles removed, people were now given some freedom to pursue their livelihood. They were developing autonomy to think, to work and to live.

Giving individual citizens more autonomy in making a living with one’s own device and efforts has awakened people’s pursuit of the meaning of life beyond the officially sanctioned political ideology.

We saw the bustling small private industries in the countryside. Grannies in the northeastern provinces revealed their talents for raising minks and growing rare medicinal plants. In Yunnan, we saw ethnic minority women in their traditional colourful costumes — indigo-coloured cotton skirts with multi-coloured stripes — working barefoot in the rice fields. They looked up at us, bright-eyed and full of spirit.

The economic reform set free the vitality of the people to conduct economically productive work, and to raise the standards of material life from poverty to abundance. Giving individual citizens more autonomy in making a living with his or her own devices has awakened people’s pursuit of the meaning of life beyond the officially sanctioned political ideology.

In public parks, there was a singing and matchmaking contest. From a distance, the singing did not sound too pretty, but that afternoon, it was not about the voice but the freedom of being allowed to enact an old ritual of matchmaking, to openly express one’s admiration for and make a connection with another human being — it was a celebration of life, a renewal of spirit.

In another park, we saw a frail old lady dressed in handwoven cotton clothing, faded with years of washing. She dragged her feet along in tattered cloth shoes, holding in her hand an entire plant of sunflowers. She mumbled as she walked: “I must take this to the Buddha, I have no money to buy flowers; I pulled it from the park’s flower bed!”

While much can be said about the old lady’s “lawlessness”, we were moved by her love and devotion to Buddha. To her, the meaning of life lay in being a good daughter of Buddha, living in bliss and hope that she will in her afterlife be born into a life of peace and happiness. This obviously provided her with the solace from an otherwise pretty harsh life.

With increasing wealth and prosperity, there is an awakening of the pursuit of life beyond economic survival and material wealth; people yearn for something more, something not as tangible but that gives meaning and long-lasting satisfaction of and happiness in life.

Many years later in 2008, I volunteered to work in Sichuan’s earthquake projects.

When I first arrived in Chengdu at the headquarters of the relief effort, I was housed in a public guest house across the street from Wenshu Fang (文殊坊) — an area surrounding the famed Wenshuyuan (文殊院) — where the temple was holding a Shuiludaochang (水陆道场) to commemorate the victims of the earthquake that numbered in tens of thousands.

The air reeked of incense smell while spiritual banners and flags fluttered in the wind. The chanting accompanied by the bells and drums penetrated our ears and sank deeply into our hearts. Thousands of people were milling around the temple compound and its impressive pavilions and gardens.

...a sense of ultimate reality of truth about life, the universe and the self that transcend the individual person.

I bought a bunch of lotus flowers with stems to offer to the temple in spite of my Christian faith. What I was offering was a universal spirit of compassion and benevolence to human life and the seeking for salvation from the earthly sufferings. In other words, the hope and compassion of the sort found in human spirituality that transcends organised religions.

The need for spirituality

Clinical psychologist Everett Worthington and his colleagues proposed that there are four kinds of spirituality:

(1) religious spirituality (connected to the sacred),

(3) nature spirituality (connected to nature), and

(4) cosmos spirituality (connected to the whole of creation).

Spirituality provides the individual with meaning and purpose of life and an awareness of death and dying; spirituality leads to pilgrimage in search for the sacred, hope and a sense of belonging and identity through these connections.

Seeking spirituality is a universal human need; the entire human history is filled with stories of how people seek and find answers to these big questions that give rise to hope and compassion towards the self, others and the universe.

The need for human spirituality, however, comes to the surface for most people after the survival needs have been met.

Spiritual fulfilment has been found to give people strength in resilience and promote positive human growth: psychologist Frankl, who served as a prison doctor in Nazis concentration camps, found that if one has an answer to the meaning of life, one can survive and even thrive in the camp. We have also heard in religious studies stories of people who maintain peace and happiness under the worst oppressions.

Recent positive psychology research further systematically investigates the role of spirituality in human growth and development in adolescents, as well as the graceful and positive ageing in the elderly. Spirituality has been found to moderate the negative impact and injuries caused by cancer and other major devastating illnesses. In clinical work, we found that spirituality helps people to recover from severe trauma and promote growth and psychological well-being in the aftermath of a trauma.

In summary, spirituality is a fundamental part of human nature. The need for human spirituality, however, comes to the surface for most people after the survival needs have been met. Spirituality is also something that the individual has to seek and aspire to with autonomy.

No wonder in contemporary China, with its rapid and astonishing accomplishment in material life, people are awakening to autonomy and a hunger for spirituality.

Related: Chinese spirituality [Part two]: The sacred is in the mundane | The Chinese ghost stories we tell ourselves | A matter of life and death in the US, China and Japan