Connecting the world: Role of China and Singapore

07 Nov 2019
By Chan Chun Sing
Minister for Education and Minister-in-charge of the Public Service, Republic of Singapore

Minister for Trade and Industry Chan Chun Sing spoke on the digital economy, China's connectivity, and the role of China and Singapore in this moment in history, at the Singapore-China Forum which was held in Shanghai on 6 November 2019. The forum was organised by Lianhe Zaobao and The Paper, a Shanghai media. The forum is one of the events held during the China International Import Expo (CIIE). ThinkChina presents Mr Chan's speech. 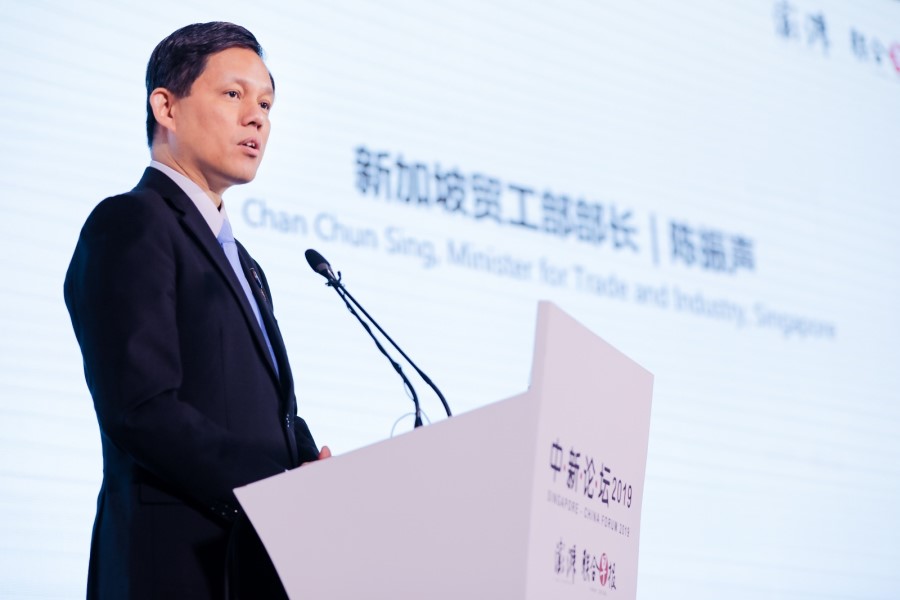 Minister for Trade and Industry Chan Chun Sing speaking at the Singapore-China Forum held in Shanghai on 6 November 2019. (SPH)

Grace Chong - 1 December 2022
US academic Zhu Zhiqun gives an assessment of the late former President Jiang Zemin’s policies during his time leading China throughout the 1990s and into the early 2000s.
Read more
Translated by Grace Chong on 7 November 2019

First let me thank Lianhe Zaobao (联合早报) and The Paper (澎湃新闻), for inviting me to this Forum.

Today, I will use the title of the Forum - (Lianhe Zaobao and The Paper’s Singapore- China Forum – Tech Innovation and Connectivity in the Digital Economy) - to share three observations. First, the role of the digital economy in today's global economy. Second, the role of connectivity in China's development. Third, the role of China and Singapore in this moment in history. Let me start with the first.

Going forward, underpinning global integration will be the more important non- physical dimensions of integration. This includes the connectivity of data, finance, talent, and rules.

With integration, trade, globalisation and technological disruptions, domestic adjustments and international adjustments are inevitable. Just as 100 years ago, the world had to decide whether it would make the necessary domestic and international adjustments for global integration to continue, or would we retreat from the necessary adjustments and go back to being more protectionist, isolationist and unilateralist. In the last 40 to 50 years, the world has seen a tremendous increase in the level of prosperity, uplifting the lives of many. China is a great example. China has uplifted hundreds of millions from poverty in the shortest time in the history of mankind. This was brought about largely by globalisation and integration with the world's economy, where all of us are able to optimise our production at the international level. But today, the world faces a big challenge, because many countries are unable or unwilling to make the domestic adjustments that come with trade. Many countries are retreating from globalisation, trade, and some even from technological progress.

If we want to continue to enjoy the benefits of globalisation, to better integrate our global economy, to optimise our production system, distribution chains and technological progress, then the digital economy will play a most critical part in this next lap of global development. In today's world, the integration of the supply chain and distribution network is not just about the physical integration of the air, land and sea dimensions.

Going forward, underpinning global integration will be the more important non- physical dimensions of integration. This includes the connectivity of data, finance, talent, and rules. Whether the world will continue to enjoy another 20 years of peace, progress and prosperity will depend very much on the decisions by all countries today, to make the necessary adjustments for us to continue this journey towards greater integration. And one of the decisions is how we continue to leverage the digital economy, to underpin the real physical economy for greater integration. So today’s topic is aptly chosen. The next lap of global progress will depend on the integration of the global economy.

That was the Suzhou Industrial Park. It was not just about the development of a physical industrial park. It was, more importantly, a statement of our confidence and faith in China’s integration into the global economy.

In the 1990s, Singapore embarked on our first government-to-government project with China. That was the Suzhou Industrial Park. It was not just about the development of a physical industrial park. It was, more importantly, a statement of our confidence and faith in China’s integration into the global economy. With the Suzhou Industrial Park, we not only built the industrial park in terms of hardware. We partnered each other to develop software and management expertise. Most importantly, we built up a cadre of leaders on both sides with mutual trust, which we have built on to collaborate on many other projects across China and beyond China.

Subsequent to that, we worked on the Tianjin Eco-City, when China was very focused on environmental sustainability. More recently, we launched the China-Singapore (Chongqing) Connectivity Initiative (CCI), where our partnership transcends the geographical constraints of an industrial park or an urban city. Instead, it is about connectivity within the region and beyond. This is what is happening in the current phase of China’s development. China’s development trajectory today is no longer about the development of individual projects or cities. Instead, the next phase of China’s development model is about connecting groups of cities and provinces, synergising their respective comparative advantages to maximise the potential of the region.

Similarly in the South today, we are no longer talking about the development of Guangzhou or Shenzhen individually. China has embarked on the development of the Greater Bay Area (粤港奥大湾区) to bring out the entire region’s potential as a unified hub.

Likewise, Shanghai is no longer developing in isolation; Shanghai is leading the development of the entire Yangtze River Delta. Beijing is no longer developing in isolation as a major capital city. In the next decade, Beijing’s development will be closely tied to the development of the Jing-Jin-Ji region (京津冀). This is a new phase of China’s development, of regional integration within China. This phase of development is not just limited and confined to integration within China; there is another dimension of integration of all these Chinese regions to the rest of the world, and I will use three examples: Chongqing, the Greater Bay Area, and Shanghai.

Chongqing’s role is not just to connect the 12 provinces in Western China. Chongqing’s role has also to do with how it connects Western China to the entire Southeast Asia. When we first started this project, we had a vision that this will be what we call a “dumbbell effect”. A two-nodes effect. Or in Chinese, "哑铃效应" (yaling xiaoying). To connect the nodes, we have Chongqing connecting 12 provinces in China, and Singapore connecting 10 countries in Southeast Asia. And we will be connecting up the two nodes to form a powerful regional entity. But today we have exceeded these expectations. It is no longer just Chongqing connecting with Southeast Asia. If you look at the arc of history and the arc of economic development, the entire arc starts from Southeast Asia to Beibuwan, Chongqing and onwards to the Central Asian Republics.

Yesterday, I met the Shanghai Cooperation Organisation in Shanghai. We talked about how we can leverage the new International Land-Sea Trade Corridor to connect from Singapore and Southeast Asia to Guangxi, Chongqing and all the way to the Central Asian Republics. This was part of the original Silk Road. This is how the Belt and the Road Initiative is connected up, and this was also the way ancient China connected to the rest of the world, through Beibuwan.

Last but not least, I make a third observation about Singapore and China's role in this moment in history. Many people have always been surprised at why Singapore and China can work together given our disparity in size, economic weight, length of history, culture and so on. Many people are very focused on the uncertainties and turbulence in the global economy, the contest and economic competition between US and China, the uncertainties of Brexit, the problems between Japan and Korea, India and Kashmir, Israel and the Middle East, so on and so forth.

Whoever wins in this moment in history will depend on how we set the standards for the world through our positive examples, regardless of our history, size and population.

And this is why, while Singapore and China may differ in our history, economic weight, geographical size and so forth, we both share higher order aspirations that are similar. That together, we can set new standards in our approach to international affairs, set new standards in the way we govern our countries, set new standards in the way we meet the diverse aspirations of our diverse people. These are all common aims that we have between both of us. And in this moment in history, China as one of the largest countries and economies in the world, will have great responsibilities in setting the standards of behaviour for the world in economics, politics, technology and so on. China has the opportunity to seize this moment in history, to win the world over with superior technology, economics management, geopolitical perspective. It is a moment that China can and should treasure. China, in its long history, has gone through good times and bad times. China, in its long history, has always known that its benevolence will win over the world, more than its might.

And I will end off with a Chinese saying: “强者之权可治人一时，强者之德可治人一 世”. Whoever wins in this moment in history will depend on how we set the standards for the world through our positive examples, regardless of our history, size and population. Thank you very much and may you enjoy the rest of the forum.