The delicate balance of Japan-China relations and Japan-Taiwan relations

22 Sep 2022
By Sahashi Ryo
Associate Professor of International Relations, Institute for Advanced Studies on Asia, The University of Tokyo

As the situation in the Taiwan Strait develops, Japan needs to navigate relations with mainland China and Taiwan, while also keeping in mind the role of the US as well as its own interests. Japanese academic Sahashi Ryo examines Japan's options and how it will acquit itself. He notes that Japan is now firmly in an age where the Japan-China and Japan-US relationships must always be considered together. 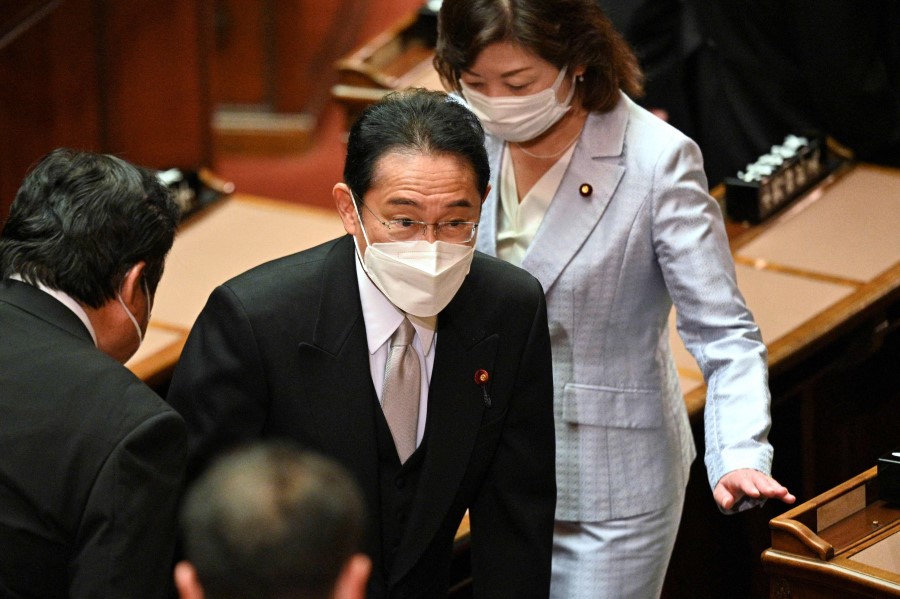 Japan's Prime Minister Fumio Kishida (centre) attends the opening ceremony of an extraordinary session of the Diet, the country's parliament, at the National Diet building in Tokyo on 3 August 2022. (Kazuhiro Nogi/AFP)

Candice Chan - 25 January 2023
While the Americans have made noticeable progress in their “pivot” to Asia, the crux of successful regional engagement rests on Washington’s ability to work with and around China’s indisputable links and influence in this part of the world, while managing its own relationship with Beijing.
Read more
Translated by Candice Chan on 19 September 2022

In Japan, there is a growing movement focusing on the Taiwan emergency. For the last few years, discussions on strengthening the alliance between the Japanese and US governments have progressed with Taiwan in mind against a backdrop of US concerns about Taiwan’s situation and expectations for Japan.

The two governments have come to make strong public appeals over the importance of stability in the Taiwan Strait. On top of that, there have been movements seeking a stronger relationship with Taiwan, with politicians, in particular, leading the charge.

The expression, “a Taiwan emergency is a Japanese emergency”, that Shinzo Abe spoke of during his lifetime, emphasised the connection between Taiwan and Japan in a strategic destiny while also referring to the geographic reality of the Japanese southwestern islands and other islands neighbouring Taiwan.

After US House Speaker Nancy Pelosi’s visit to Taiwan, five ballistic missiles landed in Japan’s exclusive economic zone (EEZ) during military exercises carried out by the People’s Liberation Army (PLA). This brought about a great shock, even more so because Japan had been largely uninvolved in the increase in tensions surrounding Taiwan.

It is clear that Japan is becoming more and more concerned that its own security will be threatened by the Taiwan emergency.

With China’s ongoing active military actions, the idea that being prepared for a Taiwan emergency should be emphasised has spread both in the government and in the society at large. Simulations of possible situations by politicians and retired defence officers have also attracted public attention. More research is being done into whether or not the Japanese government can handle the complex laws and regulations related to security and protect Japanese sovereignty and the lives of Japanese people. Keiji Furuya, chairman of the Japan-ROC Diet Members’ Consultative Council, also insisted on visiting Taiwan and deepening cooperation between the two countries.

From these movements, it appears as though Japan is strengthening its relationship with Taiwan and promoting military cooperation with the US, leaving the Japan-China relationship on the sidelines. To what extent is this true?

It is clear that Japan is becoming more and more concerned that its own security will be threatened by the Taiwan emergency. Additionally, Japanese and Taiwanese societies both respect freedom, human rights and democracy, and it is also a fact that the two are becoming closer culturally and more trusting of one another. This is demonstrated through public opinion polls.

At the same time, there is no basis for dispelling the Japanese's increased alarm towards the Chinese government or the PLA, and perceptions of China are worsening without any let-up. In addition to security concerns, fears over human rights issues within China are also spreading.

It is inevitable that responses to China’s growing powers and the stabilisation of the Taiwan Strait will be given the greatest weight in the new base documents on national security that are currently being prepared. As chair of the G7 in 2023, Japan may also emphasise human rights, as well as food and energy issues, while working to make China’s nuclear missile capabilities a part of international discussions.

The time has passed when there was plenty of space to handle Japan-China and Japan-US relations in different contexts, and we are now in an age where both relationships must always be considered together.

In fact, the approach to the Japan-China relationship has been gradually changing at its core from much earlier on. Since the Japan-China Joint Communique in 1972, Japan’s diplomacy towards China has been centred on the maintenance of stable bilateral relations, even if phrases such as “friendly relationship between Japan and China” and “strategic mutually beneficial relationship” have been used. Japanese diplomacy has always emphasised stability in its relations with other countries, even with China, which in the past, had seldom posed the biggest strategic challenge to Japan.

This kind of diplomatic attitude is now being thoroughly transformed. In Japan, a new diplomatic sense of balance is being created in its relationship with China that extends beyond the simple goal of the stabilisation of relations. This is being brought about by China’s actions both internally and globally.

The time has passed when there was plenty of space to handle Japan-China and Japan-US relations in different contexts, and we are now in an age where both relationships must always be considered together. This awareness has become widely established in Japanese strategic thinking.

Japanese diplomacy is highly aware of the need to bring China into the international order.

However, there are likely several points of additional understanding needed in considering Japan’s future moves. First, Japan never wants a crisis to occur. While discourse space in Japan overflows with a variety of ideas, the idea that the security environment surrounding Taiwan should be made worse, even if instigated by the US, Taiwan, or any other country, will never become the ruling thought. The practical moves to increase deterrence and response capabilities need to be understood separately from political moves supported by nationalism.

Second, Japanese diplomacy is highly aware of the need to bring China into the international order. This is both a requirement based on the reality that Japan and China have strong economic and societal ties, and Japan’s long-held hope for a long-term rules-based solution to various issues. This concept, different from the conservative zero-sum worldview in the US, is shared by Australia and European countries.

While attention is often focused on traditional military power, and the media tends to highlight military budget increases and strategy documents as Japan’s strategic moves, Japanese diplomacy actually wants to bring about a change in the situation through economically-focused multilateral diplomacy, and was never devised simply as a framework for excluding China from the international space and economic interdependence.

Japan is attempting to accommodate both security preparedness and diplomatic strategy with a long-term vision.

Third, the Japanese government strongly intends to continue diplomacy with China. While it is uncertain as to what results will come of it, the benefits gained from dialogue are surely greater than their costs, as this year marks the 50th anniversary of the Japan-China Joint Communique of 1972.

Japan is often seen as balancing against China with equal or greater emphasis than the US. But we must not forget that Japan is attempting to accommodate both security preparedness and diplomatic strategy with a long-term vision.

Related: The lasting impact of Pelosi's Taiwan visit on Southeast Asia | Japanese politicians tussle over power and speaking rights on Taiwan | Why Japan and China have totally different ideas of their foreign ministers' meeting | It's hard to be neighbours: When will Japan advance its diplomacy with China and South Korea?