Extreme weather could become the norm, but Chinese cities are not ready for it

With the recent severe rainfall and flooding in Zhengzhou, Zaobao correspondent Wong Siew Fong speaks to academics, who warn that China’s water infrastructure and weather drainage systems may not be suitable for the advent of extreme weather, and the authorities need to act quickly to bridge the gap. 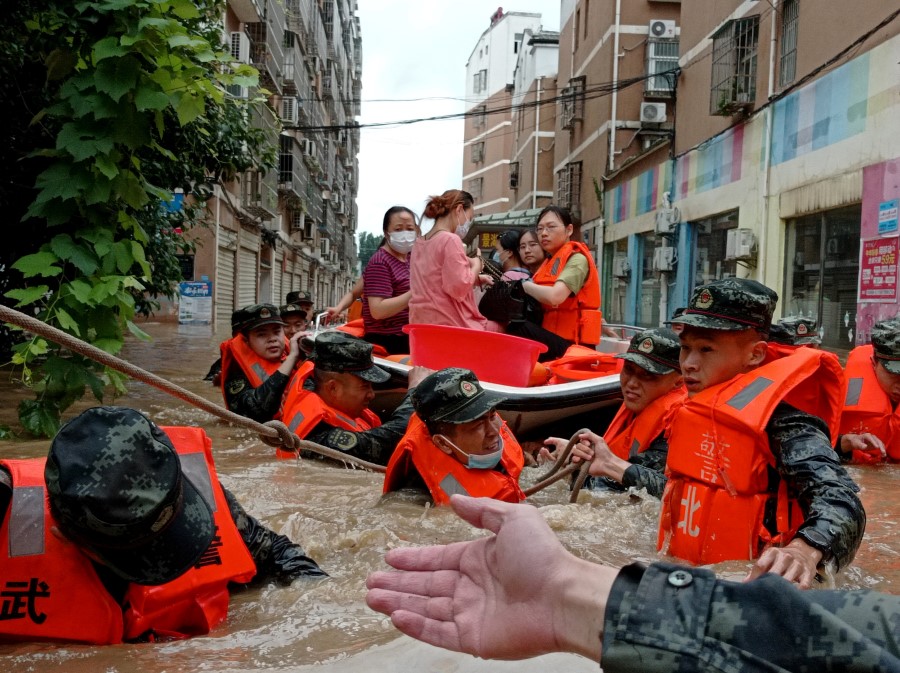 Candice Chan - 20 September 2022
Li Cheng, director of the John L. Thornton China Center of the Brookings Institution, notes that well-educated and professionally capable military technocrats are prominently represented in the PLA leadership, and this trend is set to continue after the 20th Party Congress. What contributions will this new corps of military technocrats make as Xi Jinping heads into a likely third term?
Read more
Translated by Candice Chan on 13 August 2021

A rare torrential rain in Henan in July has taken at least 302 lives, while Typhoon In-fa made landfall during late July in Zhejiang and Shanghai, forcing more than a million people to evacuate. China’s extreme weather incidents continue to rise.

The heavy rains and flooding over the past month have thrown up an important question: Are China’s cities prepared for extreme rains?

Academics interviewed noted that China still has much to do in terms of the tough problems brought about by extreme weather. Increasing torrential rain will put more pressure on urban drainage systems, and the Chinese government should focus on resolving two major flaws: damage to the natural environment in urban planning, and ageing drainage systems.

With the effects of climate change, extreme weather conditions around the world are worsening rapidly, and extreme rainfall is one of the most obvious signs.

... China has seen the most floods in the world over the past decade, with 96 floods between 2011 and 2020, affecting 240 million people — nearly half the global total, and the only country to have more than 100 million people affected.

96 floods in China over past decade; hundreds of thousands affected

Given its vast land area, China will feel on a larger scale the direct impact of climate change. A 2019 study published in the journal Geomatics, Natural Hazards and Risk showed that between 1960 and 2010, out of 539 meteorological stations in China surveyed by a research team, 65% showed rising annual total rainfall and extreme rainfall, concentrated in southeast and northwest China.

In the 1960s, the chances of extreme torrential rains in China were about 10% to 15%, but this has gone up to over 20% over the past 20 years, along with the accompanying floods. According to reports, China has seen the most floods in the world over the past decade, with 96 floods between 2011 and 2020, affecting 240 million people — nearly half the global total, and the only country to have more than 100 million people affected.

The extreme weather during this year’s summer flood season has been especially obvious. China’s Ministry of Emergency Management forecast back in May that this year’s regional and phased droughts and flooding would be severe — even the usually dry Beijing saw 10% to 20% more rain than usual.

Natural features that absorb rainfall have been damaged

The flooding of the subway and Jingguang tunnel in Zhengzhou brought a lot of attention to the extreme weather drainage and alert systems in Chinese cities. Given the irreversible tide of climate change, extreme rainfall will only get more frequent, or even become the norm.

Li Shuo, policy officer for international environmental group Greenpeace, told Zaobao that currently the average global temperature is one degree Celsius higher than during the Industrial Revolution, and the world is moving towards an increase of three degrees or more. With such extreme weather even with a one-degree increase, the world will face worse natural disasters, and China will be tested even more.

Kong Feng, an associate professor of disaster and emergency management at China Agricultural University, described the Zhengzhou floods as an “experience” for the city, which exposed two obvious flaws in China’s urban planning and drainage systems — damage to natural features that absorb rainwater, as well as ageing drainage pipes.

Prof Kong explained that in the process of urban development, some of China’s natural features to absorb rainwater have been damaged, including water networks such as old river channels, weakening cities’ ability to handle water buildup. And because changes to rainfall patterns were not considered in building transport infrastructure such as subways, some transport hubs such as subway stations and underpasses are built on low ground where water collects easily, and urban operations are more likely to be affected by heavy rains.

He cited the example of the flooding in Beijing on 21 July 2012, following torrential rains, noting that the 63 locations with severe flooding were all areas where water networks were changed by urban planning.

As cities grow, impermeable surfaces would increase while urban forests and gardens would decrease. Rivers and lakes would shrink, as would the space for the city to handle water buildup from heavy rain. For example, Wuhan city — which has a serious problem with flooding — had 127 lakes when the People’s Republic of China was first established, but now has only 38.

Urban construction has changed water processing in cities. Seepage has been reduced while flow is higher, and floods are peaking earlier. This means that with heavy rain, floods will follow more quickly.

Prof Kong also pointed out that most of the drainage systems in Chinese cities were built between 1949 and the mid-1980s, and were modelled after the former Soviet Union, where it is mostly cold, with lower-volume, less intense, more concentrated rainfall. However, China is mainly temperate, with more intense rainfall concentrated within a few months, which makes the current system unsuitable for China’s climate to begin with.

Prof Kong acknowledged that given that most infrastructure has been laid down, it is not very feasible to change the drainage system in the cities. What the authorities can do is consider more carefully the drainage needs of newly developed areas under extreme weather; as for existing systems, it will have to conduct more regular and systematic risk assessments and maintenance, including installing pumps in locations with higher demands on drainage, rather than changing the pipes only when a location becomes blocked.

Li Shuo feels that it is worth noting whether or not the recent floods will raise awareness of climate change, and if extreme weather will motivate China to take action in climate change.

Related: Zhengzhou floods: Netizens berate local government and media for inadequate response | Chongqing residents on worst floods in 40 years: This has not been a good year | Giant Buddha and sponge cities: Combating floods where three rivers meet | Floods in China: Can the Three Gorges Dam weather ‘once-in-a-century massive floods in the Yangtze River’?