Zaobao correspondent Edwin Ong notes that even as disaster relief continues after massive floods in Zhengzhou, people are pointing fingers at the authorities, saying that early alert systems and coordination between agencies can be improved. As natural disasters increase due to climate change, will governments be forced to pay greater attention to preparing for unforeseen events? 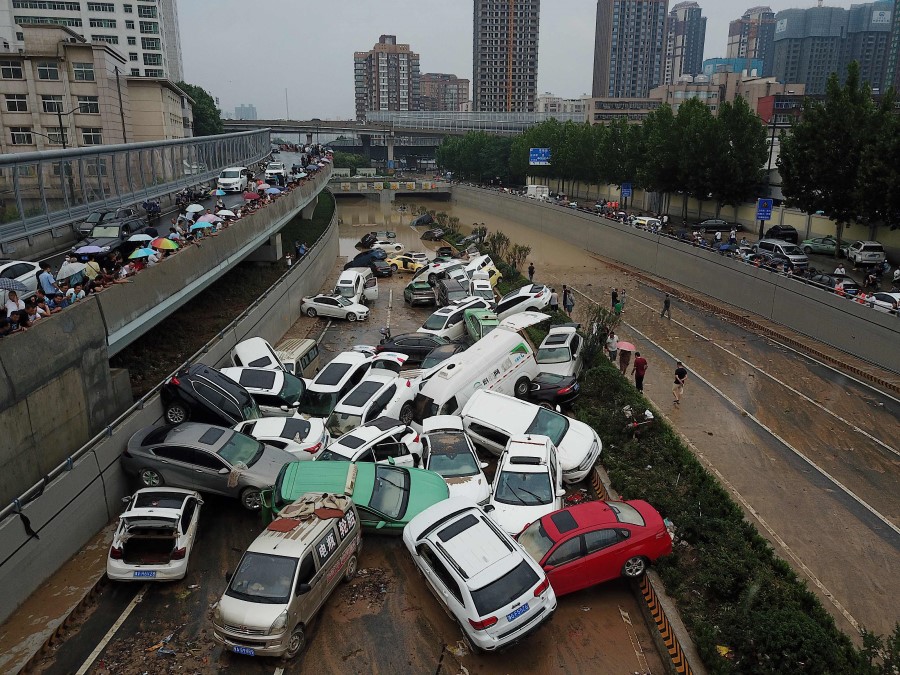 An aerial view shows cars sitting in floodwaters at the entrance of a tunnel after heavy rains hit the city of Zhengzhou in China's central Henan province on 22 July 2021. (Noel Celis/AFP)

Candice Chan - 29 June 2022
Over the past couple of years, there has been an influx of migrants from Hong Kong to the UK. Communities have been forming in various cities, such as London and Manchester. And as Hong Kongers find jobs and settle in, the British way of life rubs off on them. But underneath all that, they remain Hong Kongers at heart.
Read more
Translated by Candice Chan on 22 July 2021

Zhengzhou, the capital of Henan province, has been hit by heavy rains in the “downpour of a millenium”, with a year’s worth of rain falling in just three days. Some media outlets calculated that it is the equivalent of water from 317 West Lakes pelting down, even as China’s hourly rainfall record was broken on the afternoon of 20 July, submerging the Central Plains region around Henan and gaining national attention. Over ten cities in Henan have been severely flooded, with 25 dead, seven missing, and 100,000 people needing to be relocated.

Currently, the incident with the most serious casualties is the flooding of Zhengzhou’s Line 5 subway tunnel, which turned it into an “underground river”. Hundreds of people were trapped, including in a stalled subway train where the water nearly filled the cabins completely. At 4am on 21 July, the Henan authorities announced that the incident resulted in 12 dead and five injured, with over 500 people evacuated.

All hands on deck

The central and local authorities were not slow to respond to the sudden worsening of the situation. Chinese President Xi Jinping yesterday gave instructions to quickly get organised and handle the disaster so as to minimise casualties and loss of property. He also ordered the People’s Liberation Army (PLA) and the People's Armed Police to help the local government with disaster relief, to prevent the crisis sending people back into poverty, or leading to a major disease outbreak. The PLA Central Theater Command mobilised 3,000 troops to Zhengzhou as disaster relief, while the PLA Rocket Force deployed nearly 200 people, and the surrounding seven provinces also sent 2,000 people to assist Henan.

Henan party secretary Lou Yangsheng held an emergency meeting on the night of 20 July, calling for a firm resolution at least not to allow mass casualties, while Henan leaders declared a “wartime” approach to the disaster. Some senior officials went to the front line to oversee relief efforts. On the same day, the Henan Provincial Commission for Discipline Inspection also released a pre-emptive emergency notice warning that it would come down hard and fast on officials who slacked off or shied away from their work, and would not hold back in investigating and punishing those who corruptly channelled relief supplies and funds.

Nevertheless, over the past couple of days, public opinion has focused on whether the city’s early alert systems and emergency responses have been sufficient, while some Western media have cast doubt on the casualty numbers from the Zhengzhou subway.

Tested by extreme weather, Zhengzhou’s overall management in flood prevention, emergency response, disaster relief, as well as agency coordination is clearly not up to scratch.

On the point of insufficient early alerts, China News Weekly yesterday quoted water resources expert Cheng Xiaotao explaining that meteorological agencies had forecast the downpour to be concentrated at Jiaozuo city, south of Zhengzhou, but the forecast was slightly off and the rain fell on Zhengzhou instead. And although the Zhengzhou Meteorological Bureau issued the highest level red alert on the continued rain, China currently does not have an emergency response system for meteorological alerts, and there is no standard operating procedure to coordinate agencies and adjust dissemination of relief supplies when an alert is received.

Tested by extreme weather, Zhengzhou’s overall management in flood prevention, emergency response, disaster relief, as well as agency coordination is clearly not up to scratch. This will probably be a warning to other cities in China to have higher standards in guarding against even more damaging natural disasters in future.

Mostly due to their distrust of China, some Western media suspect that the number of casualties in Zhengzhou has been underreported. They point out that there was a major storm in Henan’s Zhumadian 46 years ago towards the end of the Cultural Revolution in which the “1975 Banqiao Dam failure” occurred. This disaster affected over 11 million people and claimed 26,000 lives. But officials covered up the incident and it was not until much later that people knew about this catastrophe.

Even if that’s the case, the official number of casualties announced at midnight yesterday is not the final word on the matter. Questioning the veracity of the numbers at this stage is clearly inappropriate.

At a press conference yesterday, Henan officials had already raised the death toll based on available statistics, saying that there were 25 deaths, seven missing individuals and over 16,300 evacuees. Answering reporters’ questions, Chinese foreign ministry spokesperson Zhao Lijian responded yesterday, “So far, we have not received any reports of foreign casualties in Henan.”

State media did not give enough attention to the issue

Others have questioned why Chinese state media have not give the floods in Zhengzhou more prominence in their reporting. For example, the People’s Daily was called out for putting the news on the seventh page and not the first.

One media commentary said that in terms of the unforeseen nature of the incident as well as its timeliness and importance, the storm in Zhengzhou is highly relevant to people’s lives and should have been placed on the front page of People’s Daily. The commentary thus concluded that much can be improved in the ruling party’s propaganda system.

Henan Television (HNTV) and other television stations went silent on the disaster on 20 July. They did not broadcast the progress of disaster relief but instead aired anti-Japanese dramas, which greatly befuddled netizens.

Regional state media were also criticised by netizens. Amid the floods in Zhengzhou, Henan Television (HNTV) and other television stations went silent on the disaster on 20 July. They did not broadcast the progress of disaster relief but instead aired anti-Japanese dramas, which greatly befuddled netizens.

In a Weibo post, Zhan Jiang, a retired professor of journalism at Beijing Foreign Studies University, even urged HNTV to stop airing anti-Japanese dramas and start broadcasting news about the floods and disaster relief in Zhengzhou. HNTV apparently only began broadcasting relevant disaster relief news at 12:10 am on 21 July.

In the area of disaster relief, officials still have room for improvement in institutionalising response measures and disclosing information in a timely manner. However, the floods in Zhengzhou as a result of heavy rainfall should be discussed from the perspective of global climate change. The recent floods in western Germany caused by heavy rainfall not seen in a hundred years have taken over 150 lives. Heat waves have hit the US and Canada, drought conditions have worsened, and wildfires are raging across western America. Severe and frequent disasters around the world are sending strong warning signals. The impending climate crisis will likely force the world to let go of its biases and undertake substantive cooperation so as to avoid dire outcomes that cannot be reversed.

Related: Floods in China: Can the Three Gorges Dam weather ‘once-in-a-century massive floods in the Yangtze River’? | Chongqing residents on worst floods in 40 years: This has not been a good year | Giant Buddha and sponge cities: Combating floods where three rivers meet