Fifty years after Nixon's visit, is China tilting back towards Russia?

Fifty years after Nixon's visit to China, some Western analysts have opined that China is tilting back towards Russia, and the new Cold War has begun. However, Chinese analyst Zheng Weibin believes that the current Ukraine crisis actually marks the true end of the Cold War. Not only would Russia be less effective with exerting its influence over its former republics, but the West has demonstrated stronger unity. He cautions that while the West likes to liken China to Russia, the two are totally different kinds of nations with very different mindsets. To move forward and achieve mutual growth, both China and the West need to put aside the Cold War mentality and embrace the current world for what it is. 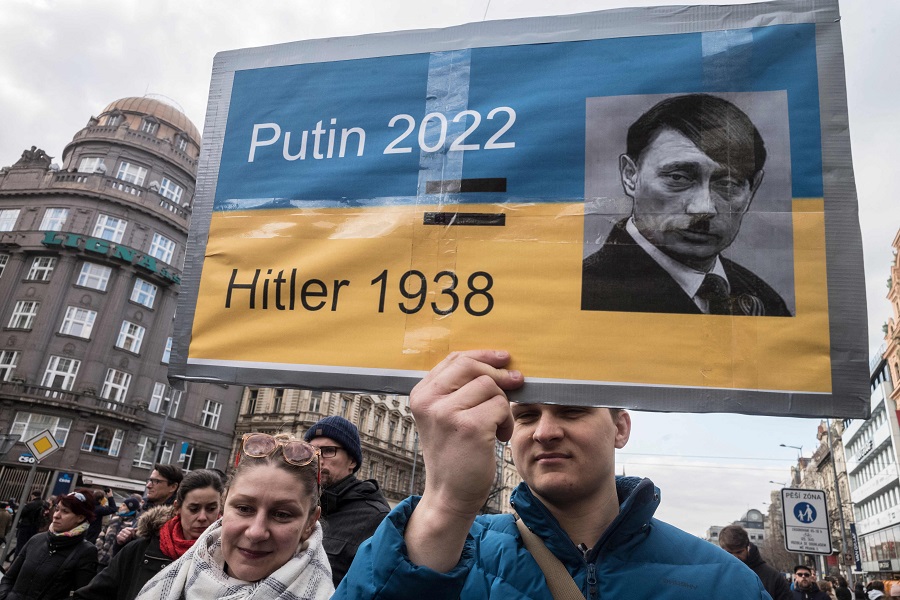 Protestors take part in a demonstration against Russia's invasion of Ukraine, on 27 February 2022 at the Wenceslas Square in Prague, Czech Republic. (Michal Cizek/AFP)

Grace Chong - 2 December 2022
Caixin notes that China is poised to roll out more policies to assist developers in an increasingly desperate attempt to arrest a protracted downturn of the multi-trillion-dollar property sector. However, amid the perform storm of changing demographics, Covid-19 disruptions, weakening demand and Beijing’s campaign of deleveraging, industry practitioners are bracing for a tough battle.
Read more
Translated by Grace Chong on 3 March 2022

In February 1972, Richard Nixon made his historic visit to China in what was described as “the week that changed the world”, shifting the dynamics of China-US-Soviet Union relations of the Cold War era.

Now, 50 years later, Russian President Vladimir Putin has ordered a military operation against Ukraine. Some western media consider this as yet another shift in China-US-Russia relations, marking the beginnings of a new Cold War. They also believe that the friendship between China and Russia was affirmed in early February after a meeting between Chinese President Xi Jinping and Russian President Vladimir Putin in Beijing. But is this really the case?

It seems that Russia’s strategy is no longer as effective as it was before.

Instead of the start of a new Cold War, this could mark the end of the Cold War. The dynamics between Russia and the various countries in the former Soviet Union’s sphere of influence have finally changed following Russia’s unceasing military actions.

Over the past couple of days, Russia has simply repeated its strategy from the 2008 Russo-Georgian War of coercing countries within the former Soviet sphere of influence to not join the European Union (EU) or NATO.

However, the plot has changed this time round. While the EU and the US did not send troops to assist Ukraine, Russia’s actions have prompted them to band together more than ever, and sanctions have also been escalating. It seems that Russia’s strategy is no longer as effective as it was before.

Russia’s current military operation could eventually become the driving force for Ukraine’s membership into the EU.

Russia’s war in Ukraine is also not going as smoothly as planned. European Commission President Ursula von der Leyen has clearly expressed her support for Ukraine’s membership into the EU following the Russia-Ukraine conflict, and states that Ukraine is “one of us”. This means that Russia’s current military operation could eventually become the driving force for Ukraine’s membership into the EU.

In that case, Europe can finally close the books on the Cold War.

China and Russia are not the same

Some Westerners believe that the current China-Russia relations have been markedly consolidated. However, even if this is true, the West cannot view or label China and Russia as the same, or else they will ultimately pay a price for such a conceited misjudgement.

Looking at the factors leading to Russia’s military action against Ukraine, one can see that Russia and China are not the same kind of nations; they are not even similar to each other. The West groups Russia and China together because this satisfies their narrative.

While this may help promote unity among the Western countries, it does not encourage global stability and development. Such labelling and categorisation will also be detrimental to the resolution of the Taiwan issue, not to mention the promotion of cooperation between China and the US.

Since the outbreak of the Ukraine crisis, the Western media has drawn parallels between Ukraine and Taiwan. However, Taiwan is not Ukraine. China and Russia have completely different perspectives and approaches in terms of problem solving logic, drivers and methods towards their respective issues. The West should not equate Taiwan with Ukraine, and misjudge the situation and its developments. Inaccurate comparisons will only exacerbate the issues.

Nixon’s visit to China turned around the trilateral relations between the US, China and the Soviet Union and changed the trajectory of global developments because the Cold War ideological conflict was put aside.

So, at this moment, it is important to look back at the value and significance of Nixon’s visit to China. However, a review and reevaluation of the historic event has been completely overshadowed by China-US rivalry and the Russia-Ukraine conflict.

Nixon’s visit to China turned around the trilateral relations between the US, China and the Soviet Union and changed the trajectory of global developments because the Cold War ideological conflict was put aside. However, this is precisely the narrative that the West is now trying to bring back to life: using ideological labels to lump China and Russia together, and creating a supposed rival camp to the Western world.

If the West continues with such a narrative, then the spectre of the Cold War will remain. This is especially obvious with the current US administration, which claims that it does not want to go back to the Cold War, but whose actions show that it still holds to a classic Cold War mentality when considering its relations with China.

In other words, this is denying the achievements made since Nixon’s policy of engaging China. Denying this policy is denying the changes seen in China over the past decades, as well as its contributions and significance to global development. It would be worth discussing whether the global landscape would be what it is now without that policy of engagement.

Essentially, the West should not continue to be so arrogant. And with the current situation developing completely differently from what happened in Georgia in 2008 and Crimea in 2014, Beijing might also need to reevaluate its approach and handle the changing landscape with a different way of thinking. "Indifference” might not be the best way to handle the Ukraine crisis.

The world is changing — the East and West alike will have to shift their perspectives and face the future with a new mindset.

Related: Was Nixon’s policy of engaging China a failure? | Why Taiwan is not Ukraine | China's cautious navigation amid talk of a new Cold War in the Arctic | China's tricky position on the Russia-Ukraine war | Will China be emboldened by Russia's invasion of Ukraine?