US State Secretary Mike Pompeo made a key speech on China at the Richard Nixon Presidential Library and Museum recently. The venue could not have been more symbolic, given former President Nixon’s role in the US’s rapprochement with China in the 1970s, and the current Trump administration’s belief that a new approach to China is necessary as the US’s engagement strategy “has not brought the kind of change inside China that President Nixon hoped to induce”. Analyst and writer Zheng Weibin weighs up the costs and benefits of this new approach. 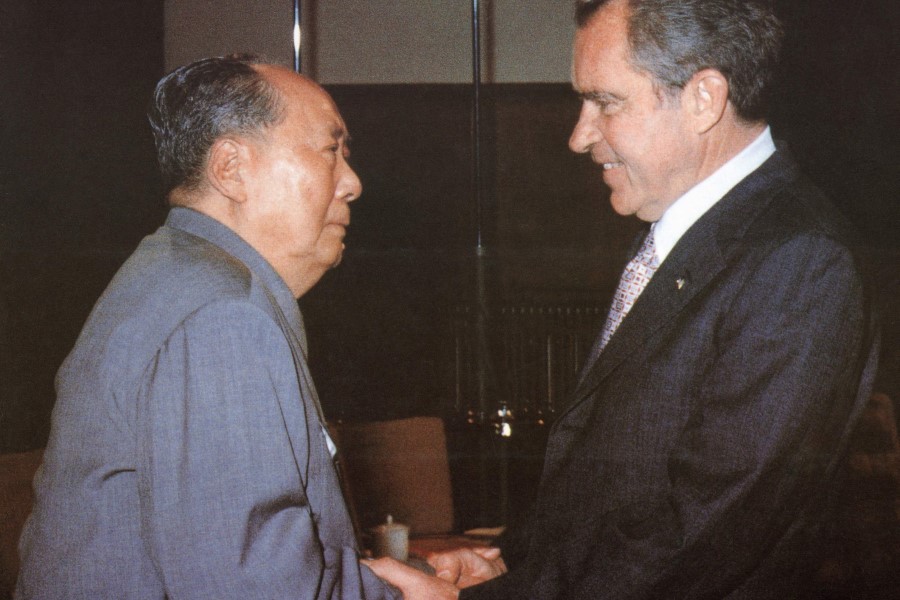 In this file photo former Chinese communist leader Chairman Mao Zedong (L) welcomes former US President Richard Nixon at his house in the Forbidden City in Beijing on 22 February 1972. (Handout/AFP)

Candice Chan - 18 September 2020
Business cooperation will likely be a key theme of the China-Japan relationship under the new Suga administration, says Japanese academic Shin Kawashima. However, various challenges will continue to beset bilateral relations. All eyes are also on Nobuo Kishi, the new Defence Minister and Shinzō Abe’s younger brother, who has strong ties to Taiwan.
Read more 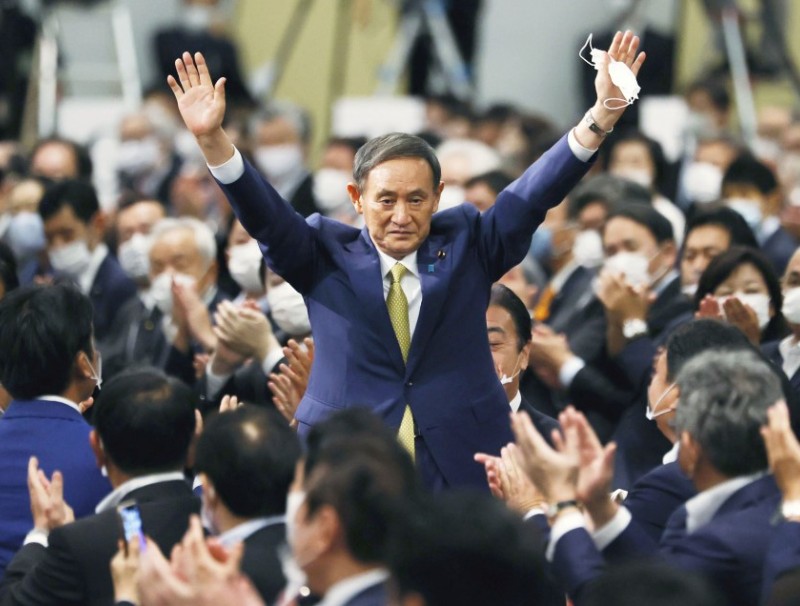 Candice Chan - 15 September 2020
What is the teaching of Chinese history without recounting the drama of the Three Kingdoms or the antics of concubine Yang Guifei? As Taiwan adjusts its history textbooks and skims over or even leaves out large chunks of China’s history, what exactly is it losing?
Read more

Candice Chan - 15 September 2020
From media companies to hotels and football clubs, the Chinese have gone on a shopping spree in the Czech Republic over the past few years. Hong Kong commentator Chip Tsao notes that the Czech Republic was the first European country to fall in love with China, allowing the latter to acquire large stakes in Czech entities. But now, it seems that the love affair is not so rosy any more. The recent visit of Senate Speaker Miloš Vystrčil to Taiwan is just one chink in the relationship’s armour.
Read more Candice Chan - 14 September 2020
Vietnam is caught geopolitically between America, the dominant power, and China, the emerging power. While some observers argue that Vietnam can continue to maintain a neutral position, many smaller states are increasingly finding it difficult to maintain the balancing act. Vietnamese academic Huynh Tam Sang suggests that facing a more assertive China, Vietnam should edge closer to the US by adopting a US-Vietnam “soft alignment” framework where America provides more support for Vietnam’s defence and security needs.
Read more
Translated by Candice Chan on 6 August 2020

On 23 July, US Secretary of State Mike Pompeo gave a speech from the Nixon Library in California, which some media have read as a declaration of a new Cold War between China and the US. Undoubtedly, this puts Pompeo’s speech in the same league as Churchill’s Sinews of Peace speech. But is the situation the same?

In his speech, Pompeo said former US president Richard Nixon’s policy towards China was a failure, because the past 50 years have shown that China has not changed in the direction that the US expects. On the contrary, a rising China has started to expand its influence and pose a challenge to other regions. The “peaceful rise” that Beijing spoke of is no more. And so, now is the time for Washington to change its strategy towards China, from contact to containment; to surround and block China, like what happened with the Soviet Union.

Since 1949, China-US relations have had two major changes. One was the Korean War of 1950, and the second was Nixon’s visit to China in 1972. The first is generally seen as China and the US fighting the wrong war, at the wrong time, in the wrong place; the latter was the right decision made at the right time. It was because China and the US joined hands that the Cold War ended.

Today, if the US government’s policy towards China is really as Pompeo claims, is this the right decision at the right time, or the wrong conflict at the wrong time? I am more inclined to say the latter.

The wrong conflict at the wrong time

The contact between China and the US in 1972 not only changed global geopolitics, but to a large extent, it also led to a change in domestic politics for both countries. In particular, Nixon’s visit played a big part in assuring China’s leaders and thus, changing the direction of China’s political movement. (NB: China was in the midst of the Cultural Revolution from 1966 to 1976.) That meeting provided possibilities for China’s subsequent reform and opening up.

Currently, whether in terms of international order or domestic situations in both China and the US, challenges are huge. And these challenges are not just due to China-US relations, but are deeply related to globalisation and the loss of the US-led world order.

The US does not have a strategy for the long-term containment of China. US anti-terrorism efforts over the past 20 years have cost some US$6 trillion, but terrorism remains a problem in many areas.

As shown by the Trump administration, in handling global issues like a pandemic, Washington's political elites are unable to work closely with world organisations and major countries, but are obsessed with their own interests and aims. This obsession has led to the weakening of the US's global status as it expends its energy on the wrong objectives.

Indeed, perhaps it is time to reform the global order that was built over 70 years ago. But adjusting the order does not mean that any particular country has to become a target. That does not help to solve the problem. On the contrary, a strategy like suppressing China might stir up nationalistic sentiment and add to conflict and hostility between countries. The space for beliefs such as freedom and democracy would shrink and the global order would become more chaotic and dangerous.

The US does not have a strategy for the long-term containment of China. US anti-terrorism efforts over the past 20 years have cost some US$6 trillion, but terrorism remains a problem in many areas. Such mistaken policy objectives are sapping the US — not only does it not help the US’s image in the rest of the world, but its leadership position is threatened.

Pompeo’s policy — aimed at maintaining US hegemony — is not based in anything resembling reality, much less any talk of a long-term strategy of containment.

In East Asia, China’s long land and sea borders would inherently lead to all sorts of territorial and security issues with other countries. Even so, East Asian countries are unwilling to choose sides between China and the US. That would be a tough choice, and few countries would put themselves in such a dilemma unnecessarily.

Besides, China-US rivalry will only hurt both sides in the long run. Overly tight links in trade and technology between China and the US means that any clashes will also inflict damage on themselves. Even if the US does manage to decouple with China, the cost will be enormous. Such a result would only benefit countries such as the EU, Japan, India, or Russia, and would ultimately lead to a more multipolar world, and not our present one with one or two poles or powers.

For China, not responding in kind would ensure that it does not expend too much energy.

In other words, Pompeo’s policy — aimed at maintaining US hegemony — is not based in anything resembling reality, much less any talk of a long-term strategy of containment. If such a policy does not make it more costly for the opponent to retaliate while assuring benefits to oneself, it is doomed to fail.

For China, not responding in kind would ensure that it does not expend too much energy. China and the US are not evenly matched in strength, and each country’s strengths are different. Since the China-US trade war, China has been in a passive position, meaning that the US’s strategic initiative will ensure that all US measures are coming from a position of advantage. And so, responding in kind would be disadvantageous to China. On the contrary, going one step further, China can continue to remain open and maintain better exchanges with other countries and regions, especially in maintaining good relations with its neighbours. That way, it will be difficult for Pompeo’s so-called policy to work.

In short, Nixon’s political legacy is not out of date. In today’s globalised world, the future trend is for countries to maintain sufficient contact and encourage cooperation. If adjustments are needed, then the US needs to provide a better framework for global order and policy of interaction, rather than regress to the old Cold War framework. A new Cold War would be an exhausting and unwelcome option.

Related: Playing the China card — how far will Trump go? | US rallying 'wolfpack' to contain China, but will it work? | Why is the West ganging up to fight the Chinese ruling party?