Have Chinese Americans fallen behind Indian Americans in the business and political fields?

Stereotypically, Chinese Americans and Indian Americans are often compared in terms of their cultural traits with some drawing the conclusion that these traits have led the Chinese to fall behind in the business and political fields. Are the Chinese Americans really at a disadvantage in these areas? What are their strengths then? 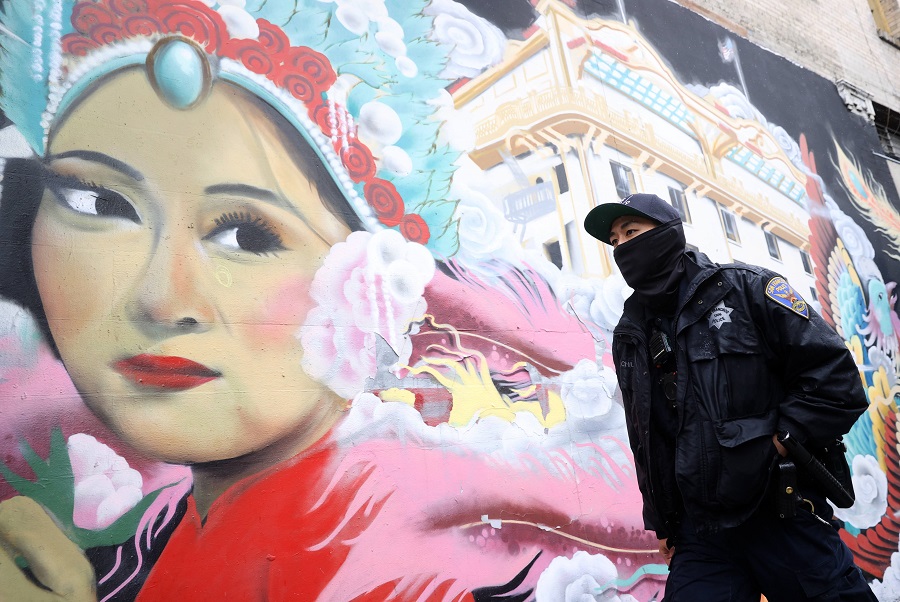 A police officer walks by a mural while on a foot patrol in Chinatown on 18 March 2021 in San Francisco, California. (Justin Sullivan/Getty Images/AFP)

Grace Chong - 30 January 2023
Amid ongoing tensions, a high-level visit by US Secretary of State Antony Blinken to China in the coming week shows hope for improved relations between the two economic powerhouses. Zaobao correspondent Yu Zeyuan notes that while the meeting may not produce practical results, it is a much needed exchange to manage and control China-US relations from worsening.
Read more
Translated by Grace Chong on 31 March 2021

The Atlanta shootings on 16 March have once again brought to the fore the circumstances of Asian Americans and their position in America’s racial landscape. I lived and studied in Atlanta some twenty years ago when I first arrived in the US and thus see it as my hometown in the US. As I read the tragic news in the papers and see familiar streets and place names, it is as if I am transported back in time.

When I was taking my PhD qualifying examinations, one of the four papers I sat for was on the history of Asian Americans. This topic has some bearing on what we see today. Reading various literature and dissertations at that time, I discovered that white American professors in this field took “Asian Americans” to mean those of East Asian descent — that is, the Chinese, Japanese, and Korean — and not those of South Asian descent. So strictly speaking, the exam should have been on the history of East Asian Americans.

Without a doubt, the achievements and profile of Indian Americans in the political and business circles far exceed that of Chinese Americans.

A Chinese friend of mine, bred in the US with extensive contacts in Silicon Valley and in the political and business circles of the US and China, told me that he has always paid attention to the comparatively superior performance of Indian Americans in the US. Comparing the lot of Chinese and Indian immigrants has always been a pastime of the new immigrant community. But I did not expect that my friend who grew up in the US would also be concerned with this topic.

He made a long list of Indians holding prominent positions in the US and found that there are currently 58 CEOs of large companies and four senior government officials in the US that are of Indian descent. Without a doubt, the achievements and profile of Indian Americans in the political and business circles far exceed that of Chinese Americans.

In his view, the Indians have one clear advantage over the Chinese: they are very good at debating. To me, debating and debate-related communication skills are indeed weaknesses of Chinese Americans. The history of Indian Buddhism tells us that the Indians have long had the tradition of debating the scriptures, and this has led to an emphasis on logic, causality, and structured argument. This cultural characteristic differs from Confucian traditions in China and across East Asia where teachers answer their disciples’ questions, but there is no deeper questioning of the answers or the forming of arguments based on logic.

Another perceived strength of the Indians over the Chinese is one that Chinese Americans generally like to emphasise: while Indians speak English with an accent, they are fluent and natural which makes it easier for them to integrate into the US’s social and workplace culture. Indian Americans are also generally more extroverted and passionate, unlike the more quiet and reserved East Asians, and this helps them to communicate better with the Americans. This character trait may be more suitable for areas that require communication, coordination, and management as well.

... the fields that Chinese Americans seem to have made achievements in and received attention for, tend towards academia, the arts, and the study of socio-historical issues.

Chinese Americans have their strengths too

However, Chinese Americans have their own unique advantages and character traits too.

Rather than the debating, coordination and leadership skills required in the modern business environment, the fields that Chinese Americans seem to have made achievements in and received attention for, tend towards academia, the arts, and the study of socio-historical issues. Undoubtedly, several Chinese Americans have received Nobel Prizes in the natural sciences, but their contributions in culture and the arts are also worthy of special attention.

From authors Maxine Hong Kingston, Amy Tan, Iris Chang (author of The Rape of Nanking), and Ha Jin, to filmmakers such as Chloé Zhao (whose name has been plastered all over the papers recently), Ang Lee (who gained prominence much earlier), and Esther Eng (who was already directing films in Hollywood in the 1930s of the 20th century), as well as the film Crazy Rich Asians, and Chinese actors who are active in the industry at present, we observe certain common traits and strengths that Chinese Americans have used to their advantage to achieve success.

The movie uses the city of Singapore to represent East Asian culture, and depicts a wealthy, luxurious and dazzling city.

At one time, Tan’s autobiographical novel The Joy Luck Club resonated well with audiences beyond her own ethnic group because immigrant communities of different ethnicities recognised the universal intergenerational conflict described in the book. That is to say, The Joy Luck Club is not just a Chinese story; it is an immigrant story about two generations bridging the cultural gap, and in doing so, going through the process of finding one’s place in society, self-reflection and finding one’s roots.

Perhaps as a result of the more obvious differences between American and East Asian (Chinese) culture, Chinese Americans have instinctively paid more attention to the artistic reproduction of cultural clashes. In the film Crazy Rich Asians, it is no longer old China — melancholic, depressed, and chaotic — like the one depicted in the earlier The Joy Luck Club that is representative of East Asian culture. The movie uses the city of Singapore to represent East Asian culture, and depicts a wealthy, luxurious and dazzling city. The film is also light-hearted and entertaining, unlike films in the past that are normally overly classical or gloomy whenever Chinese culture is involved.

On the other hand, Iris Chang also elicited a strong response from American society by uncovering a painful chapter in modern Chinese history with her profound sense of historical mission. Many Americans got to understand the Nanjing Massacre for the first time through Chang’s book. When my doctoral supervisor was applying for a job back in the day, an old history professor asked her, “What do you think about Iris Chang’s The Rape of Nanking?”

To succeed in “telling American stories well” in a cultural amorphous state is more challenging than “telling the China story” based on one’s own background.

Lee’s The Ice Storm, and Brokeback Mountain, as well as Zhao’s Nomadland, discuss issues plaguing American society as well as the intricacies of the human condition. Telling the story of the main ethnic group in the US from a Chinese perspective and in the language of American films is a particularly commendable achievement among the many contemporary Chinese cultural accomplishments. To succeed in “telling American stories well” in a cultural amorphous state is more challenging than “telling the China story” based on one’s own background. At the same time, these films show that filmmakers who grew up under a Chinese cultural background often are deeply concerned about society and have a desire to critique the social realities they see around them.

In summary, the achievements of the Chinese mentioned above are based on a high degree of creativity. Those who have succeeded possess strong individual characteristics and are extremely talented (to some extent, this also applies to the winners of the Nobel Prize), reflecting the value placed on academics and the arts, the emphasis placed on self-expression, the richness of emotions and historical awareness, and the care for society in Chinese cultural traditions.

... the success of a few outstanding high-flyers will not help to relieve the plight of immigrants mainly in the middle and lower classes.

Unlike large companies, these fields are not profit-oriented and neither do they require a CEO’s comprehensive management skills and the ability to set and police complex regulations. These fields also require less of the earlier mentioned debating skills. Based solely on the number of CEOs at large US companies, the Chinese are indeed lagging behind, but they seem to excel at bringing about a long-lasting influence to an English-speaking society through their self-expressive works.

But even when they possess these characteristics and strengths, future generations of young Chinese have to continue learning from other ethnic groups to strengthen their management knowledge and leadership capabilities. They should also get more involved in politics, law, and even social movements to protect the rights and interests of their ethnic group more effectively. After all, possessing influence in the business and political/legal systems is indispensable for the survival and development of people living in a multi-ethnic society, and the success of a few outstanding high-flyers will not help to relieve the plight of immigrants mainly in the middle and lower classes.

Related: Early Chinese immigrants: Embracing the American way of life | Why do Chinese and Indian Americans stay silent during the US anti-racism protests? | From ‘yellow peril’ to sinophobia | Anti-Asian hate crimes: Chinese Americans' weak and disparate voice in US society