The media landscape in Hong Kong is facing great upheaval, following the closures of prominent pro-democracy media such as Apple Daily and Stand News. Hong Kong pro-democracy media refugees have since taken their work overseas but few believe commentaries from afar can fill the gap of public discussion left in Hong Kong. Meanwhile, mainland-friendly media are looking to gain a greater foothold. Tai Hing Shing surveys the situation. 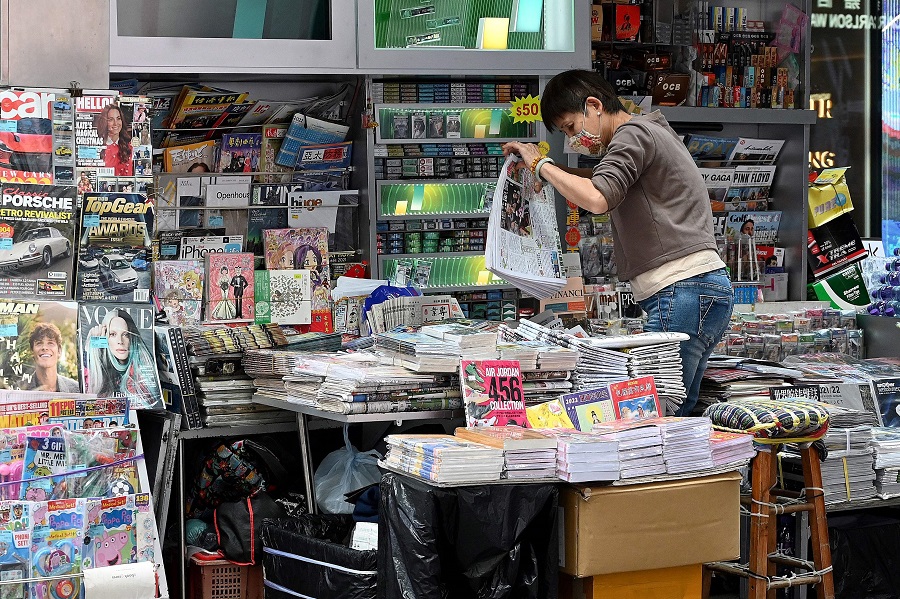 This photo taken on 6 January 2022 shows a vendor sorting newspapers at a newsstand in Hong Kong. (Peter Parks/AFP)

Grace Chong - 23 September 2022
While Chinese President Xi Jinping is likely to secure a third term at the 20th Party Congress, Loro Horta recalls the saying that one should “be careful what you wish for”. The road ahead in his third term looks to be fraught with challenges, both domestically and externally. This is the first in a series of four articles on President Xi Jinping and the road ahead.
Read more
Translated by Grace Chong on 24 January 2022

Hong Kong’s information systems are sophisticated and its media industry has always been a leader in Asia. But in the aftermath of the 2019 anti-extradition bill protests, Beijing authorities believed that some Hong Kong media platforms had a hand in instigating the protests and decided to crack down on Hong Kong media.

Recently, two online news websites — namely Stand News and Citizen News —  in the same ilk as Apple Daily closed down one after the other. Other smaller pro-democracy media platforms such as Dare Media HK also recently announced that it would suspend its online programmes, street interviews, livestreams, publicity events and other activities in response to “a change in the social atmosphere”.

Pro-democracy online news platform Mad Dog Daily, founded by Raymond Wong Yuk-man, also announced its closure early this month. Now based in Taiwan, the former member of Hong Kong’s Legislative Council said this about the online news outlet’s future, “If given the opportunity, I may resume Mad Dog Daily here [in Taiwan] given enough resources and manpower.”

Data shows that Hong Kong was hit by an emigration wave over the past two years, with a large number of pro-democracy supporters migrating to European and American countries and Taiwan. Some people have also established online news websites there, keeping an eye on the situation in Hong Kong.

Among them, Hong Kong’s Phoenix Media Investment, which has always catered to the mainland Chinese audience, recently announced after its six-month reorganisation on 1 January that it would prioritise gaining a foothold in Hong Kong (立足香港) and bolstering Cantonese media. The broadcaster’s Phoenix Hong Kong Channel will mainly air Cantonese programmes and a variety of films and variety shows, as well as produce original Cantonese programmes with a better portrayal of local Hong Kong culture.

Besides state media such as CCTV and Xinhua, some local provincial and city level media have also recently set up bureaus in Hong Kong to provide comprehensive reports on Hong Kong news.

Xu Wei, chairman and executive director of Phoenix Satellite TV, said the adjustment has strengthened Phoenix’s media positioning of being based in Hong Kong while catering to Hong Kong, Macau, Taiwan, as well as Chinese people around the world. Phoenix will give full play to its influence and transmissive power in Hong Kong, Macau, and Taiwan, to boost cohesion among Chinese around the world, and strive to build a fresh, world-class Chinese-language media group.

Hong Kong’s pro-democratic camp shifting base is equivalent to removing themselves from their target audience, which ultimately would not allow them to make much of an impact. - Li Jiangsheng, Tianda Institute research fellow

Pro-democracy camp will find it hard to make much impact

Chan feels that news reports are all about firsthand interviews, and secondhand information is of little news value. “For example, when local media does court reports, they can add some observations from the location, but reports from outside of Hong Kong can only report the case verdicts.”

He believes that if the pro-democracy camp writes about Hong Kong news from overseas, only the commentaries would be of more interest.

Tianda Institute research fellow Li Jiangsheng also told Zaobao that Hong Kong’s pro-democratic camp shifting base is equivalent to removing themselves from their target audience, which ultimately would not allow them to make much of an impact.

Right now, Hong Kong’s media industry is seeing a chilling effect as they dare not criticise the government, which would lead to many social issues getting hidden and growing into bigger social incidents. In the long run, that would not be good for Hong Kong society. - Ronson Chan, Hong Kong Journalists Association chairperson

Li also said that given Hong Kong’s current situation, the top priority for the SAR government is to legislate as soon as possible to stop the gaps and clamp down on fake news and rumour-mongering; it has to take effective measures in media control, especially new media, so that the new measures can stop fake news and inflammatory rhetoric.

However, Ronson Chan feels that the role of the media is to monitor the government and society, and many previous social incidents in Hong Kong were first exposed by the media. Right now, Hong Kong’s media industry is seeing a chilling effect as they dare not criticise the government, which would lead to many social issues getting hidden and growing into bigger social incidents. In the long run, that would not be good for Hong Kong society.

Related: Interference in China’s media industry: Even Global Times editor Hu Xijin ‘cannot stand it’ | Beijing’s 'cleansing' of Hong Kong industries: Who will be the next target? | Stand News closure and the vanishing voice of HK’s pan-democrats | Beijing’s message behind the closure of Hong Kong’s Apple Daily | Governing Hong Kong: Beijing needs to tread carefully with the national security law