This is not the first time that Hong Kongers are leaving their city to seek greener pastures. But this time, they may not be coming back. On the eve of the 25th anniversary of Hong Kong's handover, HKU Business School lecturer Vera Yuen analyses the trend of Hong Kongers leaving and the impact of this mass exist on those left behind. 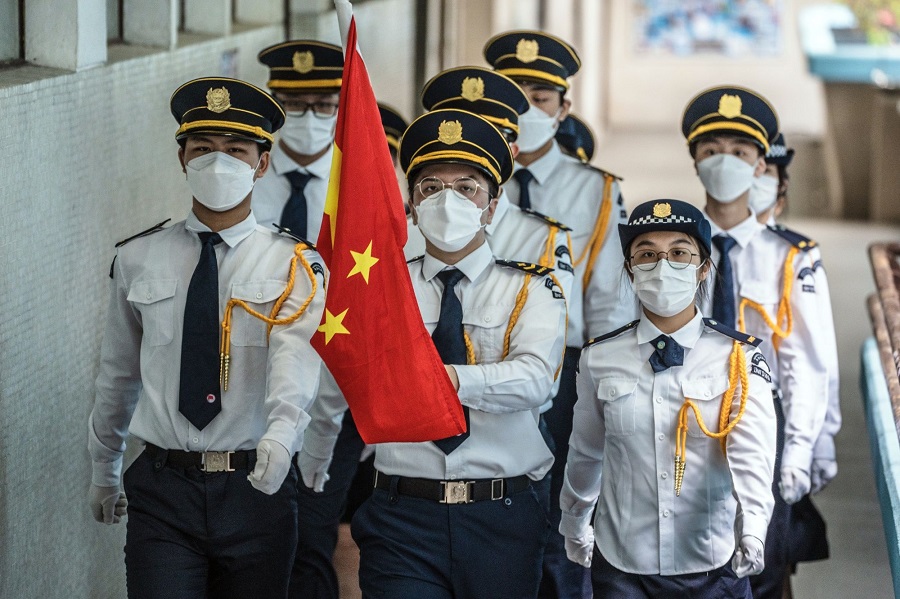 Students march with a Chinese national flag during a flag-raising ceremony to mark the 25th anniversary of Hong Kong's return to Chinese rule at Scientia Secondary School in Hong Kong on 30 June 2022. (Lam Yik/Bloomberg)

Just a couple of years ago, few would have imagined a population exodus from Hong Kong. But in 2022, Hong Kongers have gotten used to tearful parting scenes at the airport, with residents and expats alike leaving the city at an alarming speed.

A key driving factor is the heated social movement that ignited in 2019 against an extradition law. For months, the city was in chaos with violent clashes between the police and protestors. The government responded by passing the national security law in June 2020 and enacting electoral reforms in 2021 that made the selection process for chief executive one that involves little or no opposition. While some consider the tightening measures necessary to restore social order, others worry that Hong Kong has become just another Chinese city.

It is not the first time Hong Kong has seen such a massive outflow. Back in the 1980s and 1990s, many gave a vote of no confidence to the then British colony’s uncertain future by leaving. The Sino-British Joint Declaration was signed in 1984 to settle the conditions for Hong Kong to be handed over from British to Chinese governance in 1997. Anxiety during the transition period triggered the tide of emigration.

Tellingly, in a 1988 social indicator survey conducted by academic Wong Siu-lun, Hong Kong people were not sanguine about the future. For instance, they expected a curtailment of civil rights (76%), a reduction of individual liberty (73%), a decline of the legal system (61%), and deterioration in living standards (67%). One in two respondents said they worried about political instability before 1997.

According to the Security Bureau’s estimates, about 534,000 of Hong Kongers emigrated between 1987 and 1997, which is about 9% of the population in 1992. Post-handover, after seeing that Hong Kong society has remained stable, some of the emigrants or their offspring returned to Hong Kong for better economic prospects after securing citizenship in a foreign country. Indeed, the Chinese economy grew rapidly afterwards, and Hong Kong benefited as the bridge between East and West.

... personal freedom (49%) and Hong Kong politics (16%) were the top two reasons why the opposition supporters decided to migrate...

Fast forward to the present and outgoing Chief Executive Carrie Lam herself has admitted that people are moving out again. Emigration has become much less difficult with countries opening up routes of citizenship to Hong Kongers.

For instance, the Home Office of the UK estimates that 5.4 million Hong Kong residents will be eligible for the British Nationals (Overseas) (termed BNO) visa designated for residents of the former British colony of Hong Kong, and eventually 257,000 BNOs and their dependents may emigrate to the UK over a five-year period.

Statistics show that, as of March 2022, 103,900 Hong Kongers have applied for the BNO visa. The number does not include emigrants to other destinations and emigrants to the UK via other means.

According to a March 2022 public opinion survey conducted by Hong Kong Public Opinion Research Institute, while personal freedom (49%) and Hong Kong politics (16%) were the top two reasons why the opposition supporters decided to migrate, some of those holding other political stances were also considering leaving Hong Kong (25% due to personal freedom, 18% better prospect of family members). It is hard to judge whether these people would return to Hong Kong in the medium term, but in the short term, the outflow is for certain.

Then and now, brain drain

Ronald Skeldon, in his Emigration and the Future of Hong Kong article in Pacific Affairs (Winter 1990/1991), reported the profile of emigrants documented by the Government Secretariat in 1989. Nearly half of the emigrants (48.8%) were in their productive years (25-44), as compared with the total population (32.3%); more of them had degree education (14.5%) than in the total population (5.6%); and 23.3 % were previously employed in the management, professional, technical, and administrative occupations in Hong Kong (vs 5.9% in the total population).

The emigrant profiles featured are more competitive compared to the average population and to the emigrants of 1989. The brain drain this time could be as serious as, if not more, than the previous tide.

Given these statistics, in the late 1980s, there was the worry of draining away the “functional core”, a subgroup of personnel who were critical to the operation of the organisation that the economy ceased functioning. This phenomenon was prominent in certain professions such as accounting and information technology, but not manufacturing as such jobs had moved to mainland China.

There was an upside though. As the senior personnel left their positions, their junior colleagues grasped the opportunity to fill the void, creating strong upward social mobility. Social resources changed hands from the leavers to those who stayed behind. It was a windfall for the ones who chose to stay.

The UK Home Office provided a profile of a small sample of BNO visa holders (main applicants, excluding dependants) in 2021. The majority of visa holders (51%) are aged between 25 to 44; 69% of the visa holders have a degree or above education; and 63% were employed in management, professional, technical, and administrative occupations in Hong Kong. The emigrant profiles featured are more competitive compared to the average population and to the emigrants of 1989. The brain drain this time could be as serious as, if not more, than the previous tide.

The population outflow has left Hong Kong with a tight labour market in the short term. This has been made more severe by stringent Covid-19 restrictions still in place that drove away the expats. The Hong Kong General Chamber of Commerce found in a survey that 38% of its members were hit by talent departure. Some mid-level positions in the finance industries had a short-term salary hike of 25-35% to grab talents in the market of shortage.

Even those in industries such as banking may only see short-term gains as the positions will soon be filled by incoming talents, mostly from mainland China, who have taken up more positions in Hong Kong’s labour market recently.

However, this surge in salary is only seen in specific industries and not necessarily those severely hit by Covid-19 and mass emigration. For example, more layoffs of kindergarten teachers are expected as many kids leave with their parents in search of better lives overseas. The aviation sector will not be revived until a complete opening up of the borders. Even those in industries such as banking may only see short-term gains as the positions will soon be filled by incoming talents, mostly from mainland China, who have taken up more positions in Hong Kong’s labour market recently.

The silver lining is that asset outflow is not yet a major problem. So far, the amount is little relative to the deep financial market. Hong Kong is still a highly liquid international financial market, and its status is likely to remain intact if it sticks to its regime of free-flowing capital, currency peg with the US dollar, and robust financial regulations.

The talent outflow will have widespread implications on the social fabric. For example, some sectors such as teaching and social work have tended to be a supoprt base for the oppositon. As professionals in these sectors emigrate disproportionally for political reasons, there will be a shortage of well-trained, experienced and qualified workers in these human services industries. School principals have already expressed difficulties in hiring teachers for the new academic year.

The tide of emigration has also created tensions within the extended family. Some young couples with kids are moving abroad for a better living environment, education, and future for their kids. In fact, 60% of the BNO visa holders have kids, of which 91% have kids between 4-15 years old. These Hong Kongers are willing to give up high-paying jobs in Hong Kong and start over in another place. Some do so while reluctantly leaving behind their parents and grandparents, who are not prepared to live in a foreign country. Many of the elderly left behind will need help meeting their health, social and care needs.

Plan B is to replenish Hong Kong with mainland immigrants.

Three years after the anti-extradition protests broke out, the government has done little to win back the hearts of the Hong Kong people. In a recent interview, Lam refused to apologise to Hong Kongers over any of the events that have happened during her five-year term. Perhaps as the city’s order is restored and prosperity ensured, Hong Kong’s allure will still be hard to resist, and once again the migrants will relocate back, just as what happened during the last wave.

But Plan B is to replenish Hong Kong with mainland immigrants. Some recent policies are already tilting towards the non-locals. For example, as the police force has been finding it hard to recruit newcomers in the wake of the social movement in 2019, non-locals are now welcome to join. Also, the latest round of consumption vouchers will be handed out to locals as well as those without permanent residency.

While immigration may solve some problems, it could create others. Discrimination and clashes between groups could intensify. Identity-building and social cohesion could become a serious social problem.

Related: 25 years after the handover: The ‘end for Hong Kong’ or just the beginning? | Can John Lee be that all-round leader that Hong Kong needs? | Overhaul of Hong Kong's electoral system: Is it still 'one country, two systems'? | Hong Kongers moving to Taiwan: Temporary haven or permanent home? | First LegCo election under Hong Kong’s new electoral system: Tough road ahead for non-pro-establishment candidates | Why is the Hong Kong government targeting Telegram?