Former journalist Lim Jen Erh remembers the delicious da rou bao or large steamed meat buns he used to scarf down as a kid. They don’t make them like they used to, but the memory of its luscious taste is intact, triggered instantly by old photographs of bustling teahouses of old Singapore. 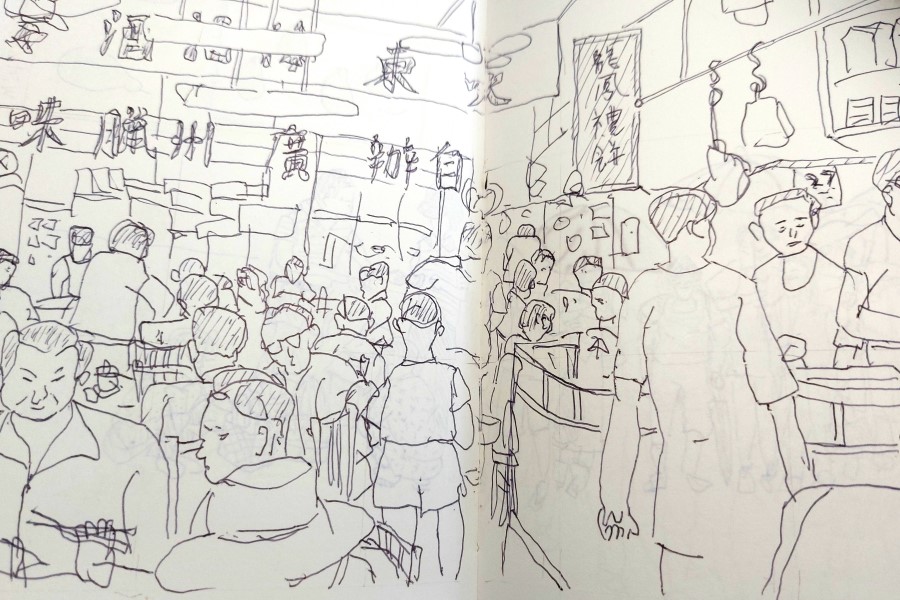 A sketch of the photo of Tai Tong Hoi Kee Restaurant by the writer.

Candice Chan - 19 January 2023
The latest announcement of China’s first population drop in six decades has gained much attention, with concerns over the long-term implications for the economy and the community. How will this affect China’s GDP and its aim to overtake the US as the world’s biggest economy? Can China reverse the population trend?
Read more
Translated by Candice Chan on 14 June 2022

When I saw the black and white photo of that old restaurant, I felt like I had always been searching for that image.

As a kid, I lived in a clan association, or huay kuan. Whenever a member passed on, the huay kuan rented a lorry to ferry other members to the funeral.

Many years later, as I read Kuo Pao Kun’s play The Coffin Is Too Big For The Hole, when I got to the scene at the cemetery, all I could think of was that tasty da rou bao.

I got to sit in the back of the lorry as it swayed its way from the city to the cemetery on the outskirts of town. Why would a child tag along? I had a job to do: keep watch over the da rou bao (大肉包, large steamed meat buns) and bottles of soft drinks. After the ceremony was over and it was time for refreshments, that was when I was busiest, distributing the buns and helping to open the bottles of soft drinks.

Aside from some reward for the task and getting a joyride, while everyone was busy at the grave, I could sit in the lorry alone and devour the meat buns — nobody counted them anyway. I forget whether I did what was right and ate just the one bun, or scarfed down the buns to my heart’s content with swigs of the soft drinks. It was certainly a feast.

The meaty taste of a memory

The buns were delicious. The filling was made up of tightly woven layers of meat; when one bit down, the sinews yielded and chunks of meat delighted the taste buds, along with the crunch of turnip in between. I would finish eating the top of the bun and tear away the paper lining the bottom. The rest of the bun glistened with meat juices. At just the right thickness, perfect and unbroken, this last morsel was perfect and the high point of eating the bun. Many years later, as I read Kuo Pao Kun’s play The Coffin Is Too Big For The Hole, when I got to the scene at the cemetery, all I could think of was that tasty da rou bao. Later on, the buns I ate — especially meat buns — were mostly filled with minced meat instead; the bottom layer was thin and the meat juices were not there.

I know the buns were from Tai Tong Hoi Kee Restaurant; the words were printed large on the paper bags. I never went to that restaurant, and by the time I remembered those days, the old-style restaurants had long been shuttered. But while it was called a restaurant, it was more of a teahouse, a place for an Asian-style morning cuppa. Once when I was in Hong Kong, I went to a traditional teahouse just to see what it was like.

Frozen in time with the click of a shutter

I always wanted to see the restaurant that sold those delicious buns, and experience the local "yum cha" (Cantonese for "drinking tea") atmosphere. In the black and white photo, the counter is on the right, with the cashier waiting to collect money to settle the bill. The crowded tables are crammed together, full of men eating and drinking, their bodies facing all directions, blocking the view of the dim sum and tea on the tables. The atmosphere looks lively, with probably a lot of talking going on. What the photo does not show are the colourful paper strips that were said to be hung all over the wall, showing dishes and prices, written by hand with a calligraphy brush.

The lively teahouse scenes of the past are no more, and unfortunately, those unforgettable scrumptious meat buns cannot be seen in the photo either.

In the centre of the photo is a little boy standing with his back to the viewer; we can't tell if he is looking for someone, or coolly observing the scene.

The lively teahouse scenes of the past are no more, and unfortunately, those unforgettable scrumptious meat buns cannot be seen in the photo either.

Old photographs prove that something used to be, and now is no more. Just as the twinkling stars in the night sky move through time, what we see is the light from many years ago, which has passed forever.

I have joined several Facebook groups, where I get to see valuable old photos of Singapore, one of which is the photo of Tai Tong. Some scenes in the photos are familiar, having personally experienced them; some are totally unfamiliar, such as villages that I never lived in, street markets that I have never been to, and things from even further back.

For French philosopher Roland Barthes, following the death of his mother, he found himself looking at photographs of her, “gradually moving back in time with her, looking for the truth of the face I had loved. And I found it… The photograph was very old. The corners were blunted from having been pasted into an album, the sepia print had faded, and the picture just managed to show two children standing together… My mother was five at the time (1898), her brother seven.

“The distinctness of her face, the naive attitude of her hands, the place she had docilely taken without either showing or hiding herself… I saw the kindness which had formed her being immediately and forever… I stare intensely at the Sovereign Good of childhood… and I discovered her as into herself.” However, he also knows that “by shifting this reality to the past (‘this-has-been’), the photograph suggests that it is already dead.”

Old photographs prove that something used to be, and now is no more. Just as the twinkling stars in the night sky move through time, what we see is the light from many years ago, which has passed forever.

Alive in our memories but gone with the past

There is a play called Sizwe Banzi Is Dead, by South African playwright Athol Fugard. The story is set in South Africa during apartheid, where a Black customer nervously walks into a photography studio run by Black photographer Styles. The customer says his name is Robert Zwelinzima. While taking the customer’s picture, Styles learns that the customer’s real name is Sizwe Banzi. He has come to Port Elizabeth to work, but the police found him without a jobseeker’s permit, and he has three days to leave. However, after a night of drinking, Banzi and his friend Buntu find a body of a Black man in an alley, with a jobseeker’s permit in his pocket, belonging to Robert Zwelinzima. Buntu has the idea of putting Banzi’s photograph on the permit, so that he can stay on legally by assuming Zwelinzima’s identity — Sizwe Banzi is dead and no longer exists. Banzi excitedly goes to the studio to have his picture taken to send home to his wife in King William’s Town, to tell her that he is starting a new life.

The play is about the unfair treatment that Black people received in South Africa at the time. In the case of photography and photographs, at the instant the shutter is clicked, everything about the subject is past; in that sense, Sizwe Banzi is truly dead.

But those juicy meat buns of my childhood are in the past, and I can only remember them through old photographs.

On that old street in Chinatown, there used to be two teahouses. The one selling the buns is gone now, but the other teahouse sold mooncakes that later became my favourite. Those old teahouses would roll out mooncakes every Mid-Autumn Festival (like hotels of today, nobody wanted to miss out on the Mid-Autumn crowd).

I never stopped eating meat buns. But those juicy meat buns of my childhood are in the past, and I can only remember them through old photographs. I believe this is not just my impression. I have watched many food documentaries, and the old dim sum chefs in traditional teahouses overseas all sigh that the ingredients, processes, costs and manpower are not what they used to be. Naturally, they cannot produce the same taste as before.

Related: The power of food memories in shaping who we are | Chiang Kai-shek and the ‘President’s Fish’ at Sun Moon Lake | Beijing’s instant-boiled mutton and sweet memories of childhood days in Taiwan | Chicken rice for the Singaporean soul | [Photo story] The Hong Kong eateries we will miss