Portrayal of women in Chinese dramas getting more westernised?

Hit Chinese television series Nothing but Thirty has struck a chord with scores of working women in China, says young academic Lorna Wei. Unlike one-dimensional portrayals of women in previous dramas, this one seeks to give women in China a voice as she copes with trials in work and in love. If this is art imitating life, it seems that Chinese society is becoming more like any other modern, in fact, westernised, society we see today. Only entrenched attitudes about their roles in society can keep women back as they seek a better future for themselves. 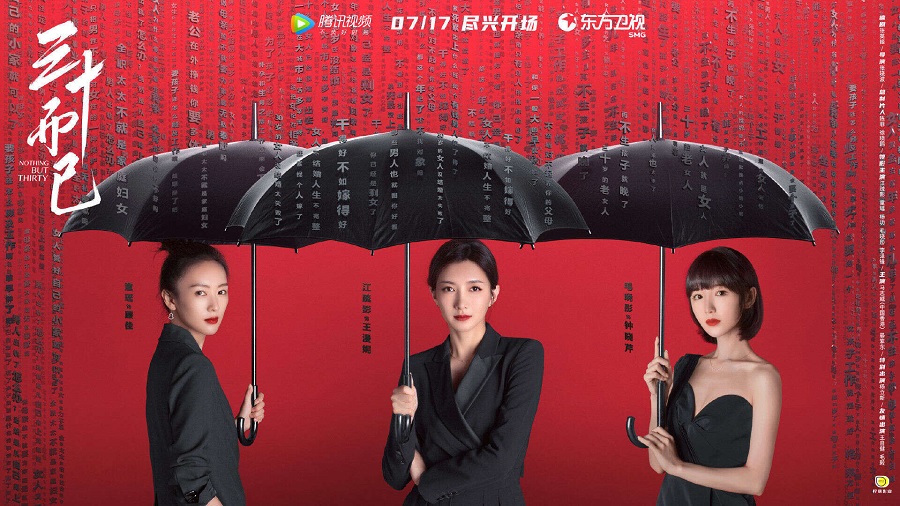 TV series Nothing but Thirty (《三十而已》) revolves around the lives of three females living in Shanghai. (Internet)

Grace Chong - 30 January 2023
Amid ongoing tensions, a high-level visit by US Secretary of State Antony Blinken to China in the coming week shows hope for improved relations between the two economic powerhouses. Zaobao correspondent Yu Zeyuan notes that while the meeting may not produce practical results, it is a much needed exchange to manage and control China-US relations from worsening.
Read more
Translated by Grace Chong on 26 August 2020

In mainland China, the term “green tea bitch” (绿茶婊) refers to a beautiful but scheming girl. This phrase is gaining popularity again after the recent broadcast of the television series Nothing but Thirty (《三十而已》).

Nothing but Thirty revolves around the lives of three women in Shanghai. Wang Manni (王漫妮) comes from a small town near Shanghai and works as a saleswoman at a luxury store. She meets her Mr Right Liang Zhengxian (梁正贤), a rich American-born Chinese working in Hong Kong. But Mr Right turns out to be Mr Wrong when Wang finds out that Liang has a fiancée.

Zhong Xiaoqin (钟晓芹) is a local Shanghai girl from a well-off family. She is an ordinary white-collar worker. The only unordinary thing about her is that she divorced her husband Chen Yu (陈屿) on her thirtieth birthday without telling her parents. However, the pair eventually find their way back to each other.

Gu Jia (顾佳), the audience’s favourite protagonist, represents the ideal woman. Gu is a self-achiever and a good wife. She helped her husband Xu Huanshan (许幻山) set up a fireworks company and chose to become a housewife after they had a baby. She is devoted to her son and husband. Alas, that is still not enough and Xu cheats on her with Lin Youyou (林有有), an undergraduate student who works at the amusement park.

To netizens, Lin represents scheming girls with innocent looks who try to seduce successful married men by any means.

Naturally, the Lin character was admonished by viewers and sparked the revival of negative labels of women such as “green tea bitch”. Many netizens cursed Lin on Weibo, Zhihu, Tik Tok, Douban, and WeChat. Some even vented their anger on Zhang Yue, the actress playing Lin, to the point that she had to turn off the comment function on her Weibo channel.

Though some netizens mocked Lin, many of them also wanted to learn from her innocent-seeming, easy-going personality, and have the same ability to seduce men with ease.

The excellent acting skills of Zhang made Lin scorned by women. Some netizens created stickers and Internet memes to show their displeasure towards Lin. In particular, images of Lin licking an ice cream made its rounds on the internet. To netizens, Lin represents scheming girls with innocent looks who try to seduce successful married men by any means. Licking the ice cream is one of the tricks up the sleeves of the “green tea bitch”. In Nothing but Thirty, Lin casually licked Xu’s ice cream and Xu supposedly got a crush on her because of her innocent yet suggestive move.

When Nothing but Thirty was on the air, most women were angry with Lin. But after the show ended, imitating Lin’s “tricks” became a trend. Though some netizens mocked Lin, many of them also wanted to learn from her innocent-seeming, easy-going personality, and have the same ability to seduce men with ease. Hence, “The Art of Tea” (茶艺) became a trending item on the internet.

Everyone and everything can learn “The Art of Tea”. Some young girls post pictures with sexual innuendo on Weibo. As shown in the “Art of Tea” of cats, the cats (or the pretty young girls) are stretching their legs, displaying their feet, and prettying their faces with blusher or face cream. The main skill involved is being innocent and sexy at the same time (又纯又欲).

In a love triangle, it is often the case that wives are expected to deal with men’s “mistakes” and the other women — the third wheels — are the ones to be blamed.

Behind the vilification of Lin or “green tea bitches” in general, and the prevalence of “the Art of Tea”, lies a certain male-centric view, even from a woman’s perspective. It was Xu, Gu’s husband, who had affairs and betrayed his family. It was Liang, Wang’s boyfriend, who lied and had many girlfriends at the same time. But it is always the female third wheel to be blamed and cursed.

There were also sharp contrasts in behaviour between men and women in Nothing but Thirty. When Liang’s fiancée Zhao Jingyu found out that Wang was dating Liang, Zhao confronted Wang directly and slapped her in the face. As for Gu, she did not question Lin first. Instead, she divorced Xu and slapped Lin because Lin tried to hurt Gu’s son. Though Gu said that only foolish women blamed the third wheel, many netizens still blamed Lin for being primarily responsible for the love affair. In a love triangle, it is often the case that wives are expected to deal with men’s “mistakes” and the other women — the third wheels — are the ones to be blamed.

This drama also brings out the phenomenon that men should always be forgiven in Chinese culture. If men cheat on others, their wives should reflect on their marital relationship. Having affairs seems to be inevitable as the more successful a man is, the more women he attracts. As the wife of a man, no matter whether he is successful or not, the wife should always maintain her charm and remain devoted. The belief that “your husband cheats because you are not good enough” makes women “serve” men and be at their beck and call. But the sad thing is there are no absolute standards for being good enough. In Nothing but Thirty, Gu seemed like the perfect wife but she was demanding and controlling in Xu’s eyes.

The double influence of Confucianism and Western culture creates paradoxical requirements on women.

Another strategy to hold on to one’s man is to be innocent and sexy as “the Art of Tea” indicates. The double influence of Confucianism and Western culture creates paradoxical requirements on women. In most Asian cultures, the ideal woman is supposed to be chaste and pure, yet sometimes sexy in front of their partners. Under the patriarchal framework, there are many impossible missions for women: being the perfect wife and to forgive men if they cheat; being sexually attractive but not aggressive; and being independent but serving their husband as the centre of the family in a docile manner.

The worst thing is that many people, especially women, take these ridiculous paradoxes as inalienable truths. Some try to be the traditional good wife and mother and modern independent women (taking double shifts) at the same time, and some try to learn the tricks of “capturing a man’s heart” by being both chaste and coquettish. If a third wheel jumps into a women’s marriage, she should support her husband unconditionally and fight against another woman for the sake of the whole family.

The only enemy of women is our tolerance of these unfair expectations. If we continue to condone these attitudes and pass them down as virtues to next generations, the next fashion trend would be “The Art of the Slave”.

Related: Death of a Peking University girl: Virginity matters in modern China | How women are used as a propaganda tool in the Covid-19 epidemic | A Chinese woman's status and the one-child policy