A nurse who just had a miscarriage was praised for returning to the medical front line; the word “period” (menstruation) was omitted from broadcast subtitles and in newspaper reports; while nurses sat in tears as their heads were shaved. Closet feminist Lorna Wei can’t help but blow her cover with recent portrayals of women in the media glorifying gender stereotypes. She seconds the view that women need respect, not empty praise. 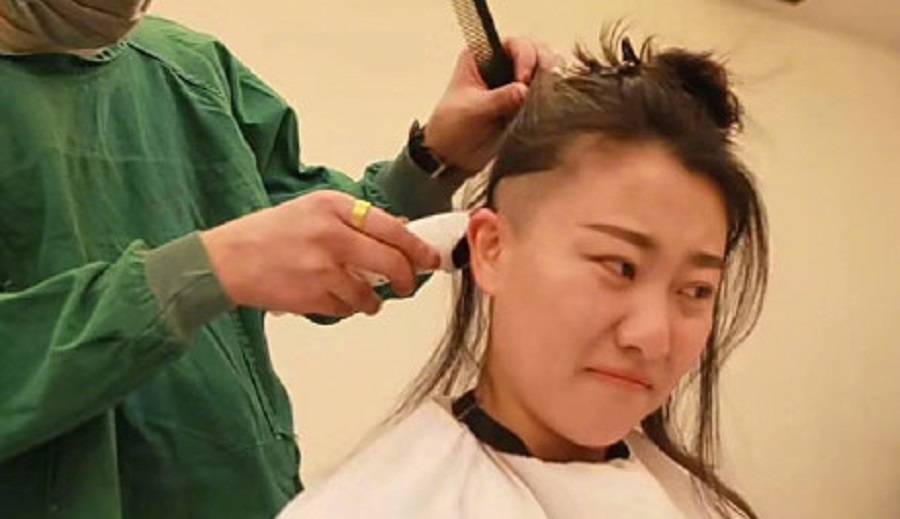 Why should we shave the heads of female medical staff? (Weibo)

I am a feminist. But I cannot reveal my identity in the Chinese context since the word “feminism” is associated with anti-man, unreasonable, aggressive, threatening and man-like images. Feminism is also an idealistic word in academia. Only some intellectuals who are exposed to Western culture get the essence of it — gender equality.

Maybe the misinterpretation of feminism results from the corresponding Chinese characters “女权” (nvquan), which indicates female rights or power only. Or maybe gender binarism is so deeply believed in the Chinese context that it is assumed that the advocacy of female rights must harm male rights. What is worse, feminists are always typified as sensitive, irritated and prone to overreacting. “Why are you always making a fuss?” is my most-received comment when I express my opinion on gender issues. And today, I am making a fuss again.

... when modern China witnesses an unexpected disaster, it goes back to tradition which says “men are breadwinners while women are caregivers”.

My feminist radar was alerted when I saw the news report that depicted so-called “true love”: a sobbing husband waving goodbye to his wife who was going to Wuhan to join her colleagues at the medical front line. He said, “Be safe and I’ll do one year’s worth of chores.” Most Chinese people praised the husband for his care and love. But as far as I am concerned, domestic chores are supposed to be shared. Why is doing one year’s worth of chores a big reward in that circumstance? Maybe I should focus on the true love part instead of the assumed gendered labour division that still prevails in Chinese society.

I became upset again when I saw the news in Jinan: the local government encouraged mothers of dual-worker families to stay at home and take care of the kids while the school semester is delayed. Maybe the male official who issued this order did it out of good intention — to keep women safe at home. Or I would interpret it in this way: when modern China witnesses an unexpected disaster, it goes back to a tradition which says “men are breadwinners while women are caregivers”. And no matter whether it is possible for men to work or not, women must take charge of domestic affairs.

Paradoxically, while the female body becomes a fascinating topic in social propaganda, why are women’s needs muted in the mass media?

These two small events have not gained great public attention. However, the following events or headlines on newspapers will definitely make one stunned. A nurse who just had a miscarriage was praised for immediate returning to her work at the front line; so was a nine-month pregnant nurse who did not stop working. When a nurse from Wuhan Jinyintan Hospital was interviewed to share her difficulties in working, she mentioned that she was exhausted because she was having her period. But the word “period” went missing in broadcast subtitles and in newspaper reports. And the most unimaginable one ⁠— 15 nurses at Gansu Maternal and Child Health Hospital were in tears as their heads were shaved. It was said that they were doing this “voluntarily”. We should appreciate the nurses’ sacrifice undoubtedly, but why not just cut their hair short? Is the news report an appreciation or a show?

Obviously, from some social media’s perspective, women’s miscarriage, pregnancy, period, hair and tears are mysterious and powerful weapons to conquer the Covid-2019. As far as I can see, their real intention is not to praise women, but to attract readers’ attention inappropriately. It seems that women are celebrated for their gender attributes, not their professionalism. Paradoxically, while the female body becomes a fascinating topic in social propaganda, why are women’s needs muted in the mass media?

There is a fallacy that is perpetuated even beyond my own culture: the more biological pain a woman suffers, the greater she is.

No local officials realised the importance of sanitary pads in the beginning, except the governor of Guizhou province, a female governor. When some volunteers contacted the hospitals and local governments offering to send sanitary pants (sanitary pads in the shape of pants), the only reply they got was “no hurry”. But efforts at sweeping this issue under the carpet were in vain since half of the sky (from Chairman Mao’s words that women hold up half the sky), knew the necessity of sanitary pants in this tough period. Although the result was quite satisfactory and sufficient sanitary pads were delivered eventually, I kept wondering why a natural need was neglected in the first place.

Some of my female friends also wrote clarifications on WeChat to “educate” the other half of the sky: a period is a normal and natural biological phenomenon and it happens to nearly all the women. It lasts about 3-7 days with a 28-35 days’ cycle and usually ends in one’s fifties. It is recommended to change sanitary pads every two hours. And most importantly, it is not controllable and this has nothing to do with women’s weak will. Some do experience painful periods that men would find unimaginable. And no, hot water does not work. When a woman wants to take a painkiller, please do not say, “Just drink more hot water and try to bear it. A painkiller is not good for your health”.

However, I do get a whiff that these media portrayals are a case of some ass-kissers being desperate to please the authorities for the sake of their own promotions or benefits.

There is a fallacy that is perpetuated even beyond my own culture: the more biological pain a woman suffers, the greater she is. It is widely believed that a painkiller would harm a woman’s fertile ability, so it is better to endure the pain of menstruation for the sake of reproduction. And the anaesthetic shots that can ensure painless delivery are perceived as baby-harmful, so it is deemed better to deliver naturally. “Other women can endure, so can you” becomes a refrain that seems so logical, even undeniable, that it is used as persuasion, even enforcement. Women’s individual wills are hardly valued.

I am disappointed not only with gender stereotypes or period shame in the mass media, but also with the denial of individual free will. In socialist China, it is true that national or group’s interest are prioritised. Sacrificing one’s interests for a majority is always a noble practice. However, I do get a whiff that these media portrayals are a case of some ass-kissers being desperate to please the authorities for the sake of their own promotions or benefits. They remind me of the “Iron Girls” in the collective period. Women were de-genderised and masculinised to show the determination and enthusiasm of national construction. But it conveyed the false idea that women were praised as long as they performed to male standards. Today, the mass media praise women for their sacrifices based on gender stereotypes but neglect their natural needs. As the People’s Daily Online comments on WeChat, women need respect, not praise. The overpraise of gender characteristics really devalues one’s professionalism and achievements. No one should be used as a propaganda tool in this special period.

Related Readings: Just back from China, Lorna Wei says "May the force be with us" | A Chinese woman's status and the one-child policy