Given the tough stand of Chinese Defence Minister Wei Fenghe at the previous Shangri-La Dialogue in 2019, and the current tense relations between China and the US, this week’s Shangri-La Dialogue is set to offer some sparks. Zaobao’s associate editor Han Yong Hong examines some points of contention and what previous rhetoric suggests. 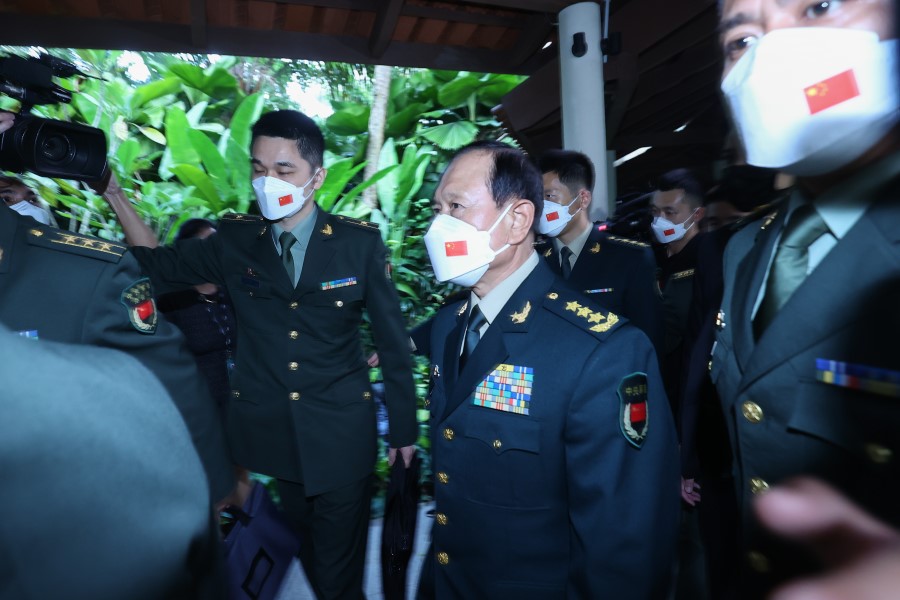 China’s General Wei Fenghe and his delegates arrive at Dutch Pavilion at Shangri-La Hotel, Singapore, for a meeting with his counterparts from the US. (SPH Media)

Candice Chan - 30 November 2022
Photo collector Hsu Chung-mao tells us how he first met current Chinese Communist Party (CCP) Politburo Standing Committee member Wang Huning over 30 years ago at an international university debate competition in Singapore, when Wang was a university professor in charge of a debate team. Wang subsequently became a prominent strategist for Hu Jintao and Jiang Zemin, as well as current President Xi Jinping. This article gives a glimpse into Wang’s approach to debating and politics.
Read more
Translated by Candice Chan on 10 June 2022

“If anyone dares to split Taiwan from China, the Chinese military has no choice but to fight at all costs for national unity… If the People’s Liberation Army cannot even safeguard the unity of our motherland, what do we need it for?”

These words by Chinese Defence Minister Wei Fenghe at the 18th Shangri-La Dialogue in 2019 made an impression and were widely spread by China’s media in a matter of hours.

As a senior Chinese defence ministerial official attending the dialogue after a gap of eight years, Wei’s strong words set the tone for China’s presence at the 2019 session and must have satisfied the Chinese people.

In fact, even the international audience was somewhat impressed with this straight-talking defence minister. At the time, the US was aggressively pursuing unilateralism under former president Donald Trump and was not in its best form on the international stage. On the other hand, China was enjoying more harmonious relations with its neighbours.

Wei opened fire at the session, criticising the US for putting its own interests before others, and withdrawing from international treaties and organisations. He also hit out at his opponent’s weak spot, denouncing the US’s racist and narrow-minded ways of venerating its own civilisation.

But he also made it clear, in a simple and matter-of-fact statement, that China has “no intention and no ability” to compete with the US for the top spot in the world.

And surprisingly, in fielding some 20 questions from reporters, Wei responded to questions about the 1989 Tiananmen Square incident.

Wei was “up against” then acting US Defense Secretary Patrick Shanahan, one of the shortest-serving persons to hold the post. Trump’s early days in office saw rapid changes in senior officials — Shanahan was appointed in January, but by mid-June, a few weeks after the Shangri-La Dialogue, he resigned due to a personal scandal. One can only imagine the difference in terms of poise and aura between Wei and Shanahan at the session.

Sixty-eight year old Wei is the first defence minister appointed from the People's Liberation Army Rocket Force, formerly known as the Second Artillery Corps, where he spent nearly all of his 50-year military career.

While the “Second Artillery Corps” sounds like a lower level outfit, it was in fact China’s strategic team in charge of nuclear and regular missiles. It is said to have been named the Second Artillery Corps by then Premier Zhou Enlai to keep it a secret when it was first formed in 1966.

Wei joined this outfit when he was 16, rising through the ranks to become its commander, then joining the Central Military Commission in 2012, and becoming defence minister in 2018.

An intense, spark-filled exchange is certain.

While straight-talking Wei and Lloyd Austin — the current US defence secretary appointed more than a year ago — have never met in person, the two spoke for the first time over the phone in April this year.

Western media reported last year that the US Department of Defense wanted Austin to speak with the higher-ranking Senior Vice Chairman of the Central Military Commission Xu Qiliang, but China turned down the US’s request three times.

Now, Austin will face Wei at the Shangri-La Dialogue, and the two defence ministers will have face-to-face talks on the sidelines for the first time.

The opposition between China and the US is sharper than it was three years ago, with more points of contention, from the war in Ukraine to the Taiwan Strait situation, and from the US’s Indo-Pacific strategy to China’s principle of “indivisible security”. An intense, spark-filled exchange is certain.

For Wei, engaging in this “diplomacy war” and war of words may not be as easy as before. Apart from having to face an even more hawkish US, China’s relations with the other countries attending the dialogue may have also deteriorated since 2019.

At the same time, the US also increased its commitments to Asia and accelerated the expansion of its strategic presence there. In promoting its Indo-Pacific strategy, the US has recently launched the Indo-Pacific Economic Framework, established the trilateral security partnership between the US, the UK and Australia (AUKUS) in 2021, and consolidated and expanded the Quadrilateral Security Dialogue (Quad).

Simply put, the US has more tools now that can be used to contain China.

Apart from a war of words between China and the US, several other countries could also engage in heated debates with China.

Beyond China-US relations, China’s South China Sea territorial dispute with some ASEAN member states over the past two years has been cooling down, but its bilateral relations with India and Australia have significantly deteriorated to the point of hostility and opposition.

Furthermore, the new governments of Japan and South Korea are also aligned with the US. Following the outbreak of the Covid-19 pandemic, public perceptions of China have also deteriorated across Western countries.

At a Zaobao video programme (热点评论) on 9 June, associate professor Li Mingjiang of the S. Rajaratnam School of International Studies at Nanyang Technological University predicted that the speeches, stands and political discourses of some representatives would align with one another to a certain extent at the Shangri-La Dialogue, creating an unfavourable situation for China.

Apart from a war of words between China and the US, several other countries could also engage in heated debates with China.

Ukrainian President Volodymyr Zelensky's video address at the dialogue on 11 June is also expected to boost the morale of the US and its allies, while highlighting the division between the Russian and Chinese camp, and the Western countries.

China and the US will use the Shangri-La Dialogue as a platform to propose different ideas for the security framework of the Asia Pacific region, competing with each other and vying for the support of countries in the region.

Undoubtedly, to counteract the US’s Indo-Pacific strategy, Wei would also highlight China’s Global Security Initiative at the dialogue and explain the principle of “indivisible security” that the Chinese leadership emphasises — that is, opposing “the building of national security on the basis of insecurity in other countries”.

Indeed, China and the US will use the Shangri-La Dialogue as a platform to propose different ideas for the security framework of the Asia Pacific region, competing with each other and vying for the support of countries in the region.

As the Russia-Ukraine war has been ongoing for over 100 days with no signs of abating, the greatest lesson and warning from Zelensky’s presence at the Shangri-La Dialogue should be that peace is hard-won and must be cherished.

Most Asian countries do not want war in their region, and neither do small countries want to come under pressure from major powers to choose sides. While it may be inevitable for various politicians to engage in a war of words on the big stage that is the Shangri-La Dialogue, hopefully during their closed-door bilateral meetings, they would think about humanity, manage their differences and avoid bringing the region into a military conflict or a path of no return. In this way, the Shangri-La Dialogue would have achieved its greatest purpose.