28 Jul 2022
By William He
Political commentator

China has been accused of debt trap diplomacy through its Belt and Road Initiative (BRI). Starting with the Hambantota Port in Sri Lanka, commentator William He examines the rhetoric surrounding the BRI, and controversies that have emerged from Asia to Africa. Is the BRI a channel for China to expend overproduction, infrastructure construction to boost connectivity, or a grand project to take over the world and counter the US? 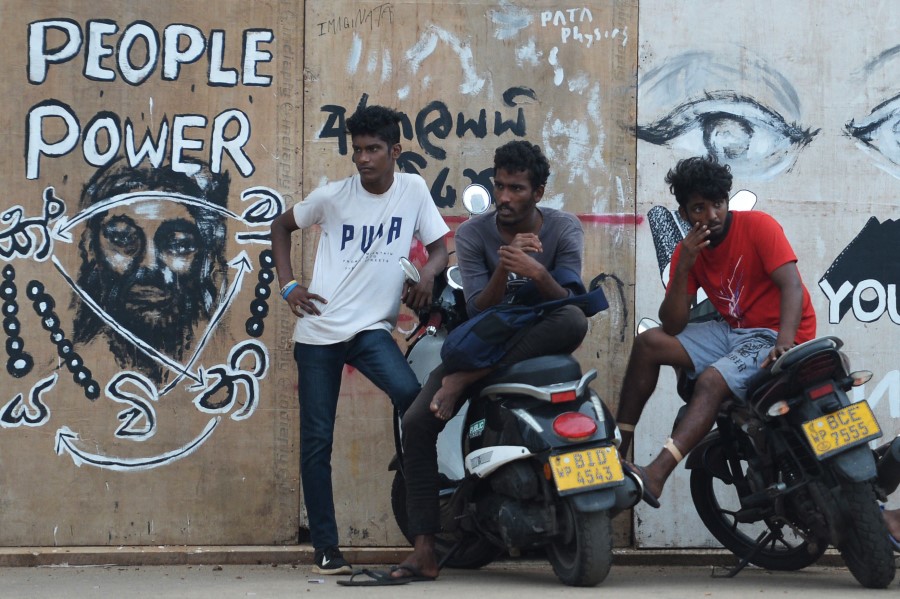 People beside a mural near Presidential Secretariat in Colombo on 23 July 2022. (Arun Sankar/AFP)

Candice Chan - 19 January 2023
The latest announcement of China’s first population drop in six decades has gained much attention, with concerns over the long-term implications for the economy and the community. How will this affect China’s GDP and its aim to overtake the US as the world’s biggest economy? Can China reverse the population trend?
Read more
Translated by Candice Chan on 28 July 2022

Sri Lanka has been caught in a debt trap for several years; now, it has gone from a severe economic crisis to a social crisis, the worst ever since its independence from Britain in 1948.

Prices are skyrocketing, food and fuel are scarce, and foreign exchange reserves are drying up. After months of public discontent and street protests, former president Gotabaya Rajapaksa fled on a military aircraft, and the country went into a state of emergency.

BRI with no financial returns?

Construction of the Hambantota Port, one of China’s landmark projects in Sri Lanka, began in 2007. Amid difficulties in repaying the loans, the Sri Lanka government handed over a 99-year lease of the port to China in 2017, effectively giving China control over the port. Meanwhile, the airport and restaurants that China built in Sri Lanka are left empty with neither airplanes nor customers.

According to a quote attributed to former US President John Adams, “There are two ways to enslave a nation. One is by the sword, the other is by debt.” China has chosen the latter — Sri Lanka is a good example of China’s debt trap diplomacy.

The Chinese government has always claimed that China is a developing country, but it has spent over US$4 trillion on the BRI and its related projects as of 2020, with returns nowhere to be seen.

There are many studies by the international community on the BRI debt trap.

On 31 March 2021, research organisation Aid Data at the College of William & Mary released a report “Banking on the Belt and Road” that examined 13,427 BRI-related projects worth US$843 billion across 165 countries between 2000 and 2017. The report revealed that over 40 countries have debt exposure to Beijing in excess of 10% of GDP, and 35% of the projects have encountered problems such as corruption scandals, labour violations, environmental hazards and public protests.

The Chinese government has always claimed that China is a developing country, but it has spent over US$4 trillion on the BRI and its related projects as of 2020, with returns nowhere to be seen. What is the Chinese government’s objective in pushing the BRI?

According to Chinese media reports in 2015, the BRI is one channel for China to expend overproduction. The Two Sessions that year discussed the BRI, hoping that it will resolve the problem of overproduction and continue to drive China’s economic growth.

However, in 2016, the Chinese media criticised the narrative above, claiming that it was a misunderstanding of China. On 15 May 2017, Chinese Communist Party (CCP) General Secretary Xi Jinping, who first proposed the BRI in 2013, described its core idea as “to promote infrastructure construction and connectivity, in line with other countries’ policies and development strategies, to deepen real cooperation and encourage coordinated growth and bring about common prosperity”.

According to Xi’s comments, the BRI’s future is optimistic, but the Chinese government’s policies have led academics to believe otherwise.

On 3 February 2021, veteran CCP policy consultant and Renmin University professor Di Dongsheng explained on his Weibo that liberal economics generally believe that China is after other countries’ energy and minerals, but he criticised it as a shallow perspective because a country’s source of wealth comes from its people and not materials.

He asserted that China wants to involve the young people in the countries along the BRI who do not have money to spend. China will provide loans, investments and employment to improve their cash flow to buy Chinese goods. This creates a new form of prosperity where China can then continue to pay their salaries and to invest and lend more.

It would comprise the Chinese and the locals in various countries living together in cities under the Chinese way of governance, with Chinese as the common language, and a shared future for mankind.

Di also believes that the CCP’s tussle to be the centre of the world is in fact a tussle between the RMB and US dollar. He said that US strategists once believed that the BRI was destined to fail because the poor countries cannot afford to repay their debt — however, they did not see the true strategic intention of the BRI.

He explained that China would form a new debt relationship with the five billion people in the poor BRI countries. The key is that the RMB will become the pricing currency and the centre of future currency bubbles. And once the CCP creates a new international currency system, it will change the balance of global politics, economy, culture and power.

Di also claimed that the BRI is a way to export China’s experience and ability with a strong government, that is China’s governance model to oppose the US, and create a new Chinese-style society in developing countries. It would comprise the Chinese and the locals in various countries living together in cities under the Chinese way of governance, with Chinese as the common language, and a shared future for mankind. Di’s blatant, chilling fascist talk is farfetched to the point of irrationality.

The claims of this CCP expert is contrary to what the CCP is saying — however, Di’s talk to a domestic audience is heartfelt in contrast to the CCP’s global propaganda.

One of the reasons why the rest of the world cannot get a good read on the CCP is because the CCP has different narratives for the domestic and external audiences — and even if the same language is used, their meaning and realities will be different.

So, is the BRI that Xi speaks of really aimed at common prosperity? Is bribery a necessary evil for the Chinese authorities to successfully implement the BRI in the name of “common prosperity”?

During the 2015 presidential election in Sri Lanka, China provided large financial support for Rajapaksa’s campaign. The New York Times reported that at least US$7.6 million was dispensed from a Standard Chartered Bank account belonging to China Harbor Engineering Company — which is in charge of the Hambantota Port project — to affiliates of Rajapaksa’s campaign.

In September 2018, Pakistan’s ruling Movement for Justice criticised former Prime Minister Nawaz Sharif for lacking transparency in negotiations with China, and accepting bribes from the Chinese government for BRI agreements.

Indeed, the Chinese public believes that all government officials in power are tied to bribery; they often hear of provincial level officials being investigated for cases involving hundreds of millions of RMB.

There is good reason to suspect that all BRI-related projects involve some form of bribery. The close integration of projects and bribery is a distinctive feature of the China model. Hence, Xi Jinping has been able to defeat his political opponents in the name of anti-corruption. Indeed, the Chinese public believes that all government officials in power are tied to bribery; they often hear of provincial level officials being investigated for cases involving hundreds of millions of RMB.

It is therefore unavoidable that the BRI would export corruption. In China, Chinese companies often rely on bribes to make sure their projects are approved — since they are used to such methods in China, they would do the same in other countries. Chinese companies do not truly believe in the law. Under the leadership of the CCP, the will of the party is greater than the law. And in reality, the will of the party could be the desire of a certain leader.

Sri Lanka is just one example of China’s debt trap diplomacy. In 2011, Tajikistan ceded to China a disputed territory of about 1,000 square kilometres; in return, China forgave part of its debt. In 2014, China loaned Montenegro US$1 billion to build the 163-kilometre Bar-Boljare Highway. The Financial Times reported that according to the terms of the contract, China has the right to access Montenegro’s coal, ports and land as collateral if it was to default.

In March 2021, Kenya’s The Star newspaper said that the Kenyan Auditor-General’s Office reported that assets of the Kenya Ports Authority and Kenya Railways authority were offered as collateral for a Chinese loan to build the Standard Gauge Railway from Mombasa to Nairobi, with a waiver of sovereign immunity on the collateral.

The Sri Lanka crisis serves as a warning for other developing countries. In July 2022, Philippines President Ferdinand Marcos Jr ordered the transport ministry to renegotiate loan agreements struck by his predecessor with China for railway projects worth US$4.9 billion.

Right now, all eyes are on whether Pakistan will become another Sri Lanka.

Related: China wants to win the world over with the BRI, but something's amiss | Even as the US obstructs its way, how can China build trust for the BRI? | China's BRI carrots for Central Asia come with potential pitfalls | Can the West's infrastructure plans rival China's BRI? | Vietnam's cautionary tale on benefiting from the trade war and the BRI | Funding wars between China and the West: The politics of bankrolling developing countries