Through the eyes of her cat Pudding, Beijinger Lorna Wei gives a snapshot of her daily life when her residential building went under lockdown last week. 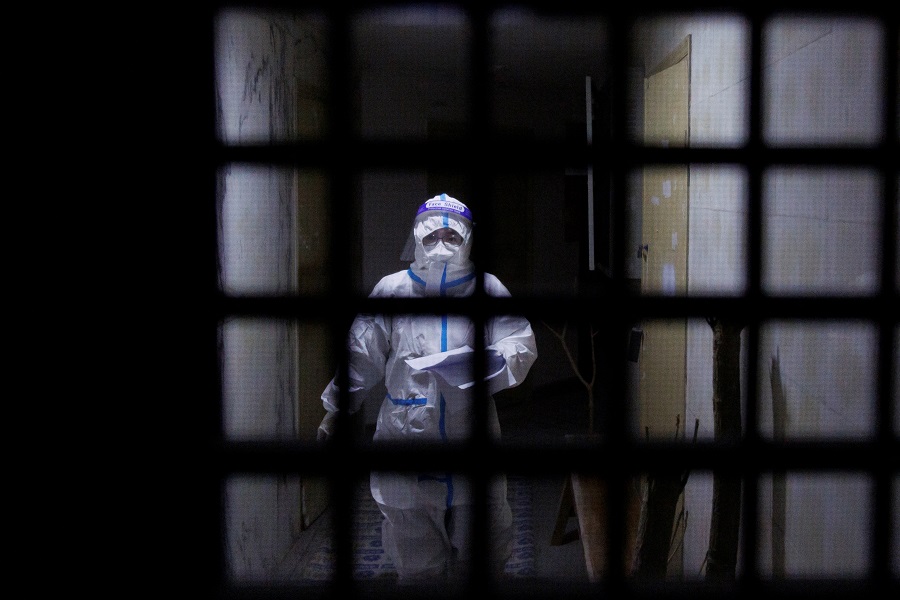 A pandemic prevention worker in a protective suit approaches an apartment in a building that went into lockdown as Covid-19 outbreaks continue in Beijing, China, 2 December 2022. (Thomas Peter/Reuters)

This is Pudding, a spy cat from Catty-Mighty Planet. I landed on Earth in 2020, and this is my third year in China. I was adopted by my sister Lorna at Tangshan, and then we moved to Beijing in 2021. I’ve observed her for almost three years, and this journal is the most recent report on her daily routine.

Today, she was so busy. Everything seemed normal except for her. She went out several times and carried many bags back to our apartment. She said there was a rumour that our building would be locked down tomorrow. I told her to calm down as we had heard so many rumours in the past three years. But she is a stubborn woman who won’t listen. She insists on going shopping and stocking up whenever rumours spread. Sometimes, she needs to “fight” with others because supermarkets have limited goods. What a silly woman.

Clever as I am, I also make tiny mistakes. The rumour turned out to be true. We got the news late at night. My sister was rather self-satisfied as she had stocked up enough food yesterday. But that self-praise didn’t last long, and she was soon trapped in panic. She cried for a while, but then she decided to take action. Yes, action. I thought she should feed me more cans of food but she refused. She sat in front of her desk, and printed many pieces of paper. I glimpsed at those papers but could not totally understand. Given my level of professional Mandarin, I gathered that she was printing many laws and regulations. She told us, my stupid younger brother Jelly and I, that these papers would protect us. What a funny woman. A clever and agile cat like me would never be caught. I knew that she was worried about the “harmless disposal”. But the infectious disease act clearly stated that cats and dogs are not the objects of the so-called harmless disposal. My words got her attention, but she didn’t feel relieved at all. “If everyone strictly followed the law, there would not be so many pets killed during the lockdown,” she murmured.

Arguing with the community workers doesn't work, and we don't know what will happen tomorrow. Uncertainty is the scariest.

My sister usually sleeps early, but tonight was an exception. After she put up the papers on the corridor wall, she kept questioning the legality of the lockdown through the WeChat group of our community. The community workers didn’t answer any questions at first, so my sister phoned them. They chatted for about an hour, and one community worker confessed that they hadn’t received any official document from the local government yet, which meant that the lockdown was illegal at the time. My dear friends from Catty-Mighty Planet, you might find that my journal can’t explain such a complicated situation. That’s also the confusion that every Chinese person experiences. Arguing with the community workers doesn't work, and we don't know what will happen tomorrow. Uncertainty is the scariest.

Not knowing what action she should take, my sister decided to lock our door firmly. She refused to open it, no matter how loud the knocking was at our door. My sister didn’t trust the medical workers who did the nucleic acid testing (the “Big White”) or the community workers. This time, I understood. If my sister was forced to be transferred to the horrible mobile hospital, there would be only one fate for Jelly and me — harmless disposal.

We survived the first morning and took a long nap in the afternoon because we didn’t sleep last night. After our rest, my sister suddenly burst into tears. Former Chinese President Jiang Zemin passed away. My sister told me that Chairman Jiang was a witty, knowledgeable, and open-minded leader who presented China to the international arena. “The best time is gone, Pudding,” she said, “if there is no hope in the future, what’s the meaning of life then?”

Our neighbours were also fighting in the WeChat group. Some complained about the lockdown, while some accused those who didn’t accept the lockdown as traitors.

This is the fourth day that we’ve been locked down. My sister is still anxious. She was more irritated when my stupid brother Jelly wanted to take a walk in the corridor. My sister has told him so many times that it is very dangerous outside, but the foolish Jelly never listens.

“We can endure the lockdown for a longer time,” my sister said, “but I’m scared that we would be the next victim like those in Urumqi.”

Our neighbours were also fighting in the WeChat group. Some complained about the lockdown, while some accused those who didn’t accept the lockdown as traitors. Some lost their belongings, while some constantly asked for favours from the community workers. Gatherings, rallies, and even fights took place in some cities in China. The only good news was that our hometown Tangshan was free after several rounds of lockdowns this year, with the longest one lasting up to almost three months. “We can endure the lockdown for a longer time,” my sister said, “but I’m scared that we would be the next victim like those in Urumqi.”

Friday used to be a happy day for us. My sister would go to work and come back by noon. But this time her school was locked down too, and she had to conduct online classes. Rumours also spread among her students, and most students wanted to run away from Beijing. We understood their feelings as we tried to go back to Tangshan too. College students usually share one room in China. In other words, four, six or eight students live in a tiny room, which means that if one student gets infected, s/he would be transferred to the mobile hospital nearby.

“What is a mobile hospital?” the stupid Jelly asked.

“Well, it’s not really a hospital. Hundreds of people stay there, with the light on all day. Food and medicine are in shortage there,” my sister replied.

“Can we go there with you?” Jelly asked.

“No, dear, you would be disposed of as an item,” my sister permitted herself a wry smile. “No worries, I’ll protect you two with my life,” my sister promised.

Teachers were asked to be volunteers because one student got infected and the other students were quarantined in their dorms.

My family finally calmed down today, but our neighbours fiercely quarrelled in the WeChat group. Jelly finally understood that he could not go out as usual because it was dangerous outside. We also received a free bag of vegetables from the community. Because the community workers didn’t harm us, my sister trusted them a little bit more.

Just as we were enjoying the peaceful day, the university my sister works at contacted her. Teachers were asked to be volunteers because one student got infected and the other students were quarantined in their dorms. My sister refused, saying: “I can’t go out because of the lockdown. How can I help my students?”

“What is a volunteer?” the stupid Jelly asked silly questions again.

“For what?” Jelly wondered.

“Delivering food, transferring students, testing their body temperature, clearing and safeguarding their dorms, and comforting them,” my sister answered.

“A cater, a driver, a medical staff, a cleaner, a guard, and a psychiatrist. Am I right?” Jelly seemed to be very proud of his answer.

“Yes, dear. A teacher-volunteer needs to do all those, and most importantly, without payment,” my sister laughed.

“Oh, dear, you haven’t understood what devotion is yet,” my sister said, looking deep in thought.

“We can go out!” The screaming from our neighbours woke us up. My sister quickly checked her phone. Before 10am, our neighbours were quarrelling with the community workers, with a harsh and impatient tone. But after 10am, there was only gratitude and congratulations in the WeChat group. Though our building was still labelled as “high-risk” on the app of the State Council, the community workers decided to set us free based on the result of nucleic acid testing.

She didn’t go out today, but I could feel that her mind and body loosened up because she had regained her freedom.

Out the window, we could see so many people playing outside, though it was freezing cold. My sister cooked a fancy lunch for herself and kept smiling all day. She didn’t go out today, but I could feel that her mind and body loosened up because she had regained her freedom. This is the first time that we were locked down, and I do hope it’s the last time too.

Related: Animal protectors and feminists hindering pandemic work in China? | New Great Wall of China against Covid-19 built with flesh and blood of the little people | Many want out as Shanghai recovers from lockdown | Wuhan lockdown doctor and her story battling the Covid-19 pandemic | Reflecting on two months of lockdown in Shanghai