Tencent struggles to grow amid crackdowns and competition

Hit by China's regulatory crackdowns, increased competition and slowing growth, Chinese internet titan Tencent had a tough 2021. The company has had to restructure and expand its international revenue streams, and it is now faced with tough layoffs. How is it staying relevant in the tech game, and does this mean that "winter is coming" for the internet giant? 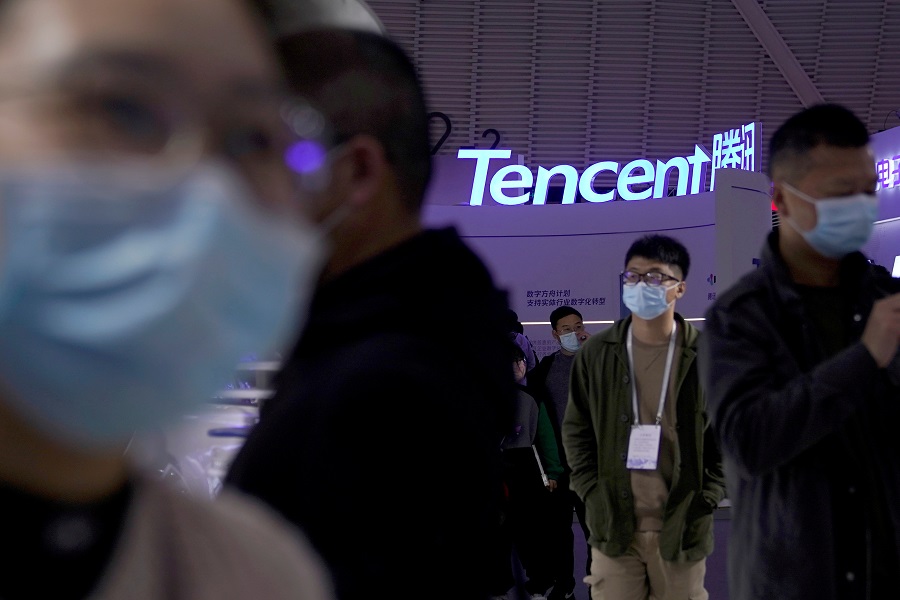 A logo of Tencent is seen during the World Internet Conference in Wuzhen, Zhejiang province, China, 23 November 2020. (Aly Song/File Photo/Reuters)

Grace Chong - 21 June 2022
In pursuit of better working conditions, China's post-00s generation has gained a reputation for being newbies who are difficult to manage and who show their superiors little respect. While those who go to extremes may be in the minority and some admire their brave fight for workplace rights, ultimately, they may be putting their job prospects in jeopardy.
Read more
Translated by Grace Chong on 8 April 2022

Tencent — the operator of China’s unassailable WeChat super-app, the world’s largest video game publisher and one of Asia’s most valuable companies — is firing its staff.

At the tech conglomerate’s latest earnings call on 23 March, Tencent president Martin Lau admitted that the industry faces “fundamental changes and challenges” after years of “frothy and unhealthy” growth.

Tencent’s CEO and co-founder Pony Ma was blunter at an internal meeting in December, saying that “winter is coming” for the firm.

The titan had a tough 2021. Beijing launched a regulatory broadside at the tech sector, aiming at some specific worries such as minors spending too long glued to games, as well as broad goals such as curbing anti-competitive behavior and the “disorderly expansion of capital”, partly under the banner of “common prosperity”.

Amid this uncertainty, the company is hedging its risks. On 23 December 2021, it sold down its stake in e-commerce giant JD.com Inc. for 78 billion RMB, reducing a nearly 17% holding to just 2.3%. Insiders at Tencent said that the sale was made over concerns of greater antitrust scrutiny to come. More sales may be on the horizon.

On the call, Lau tried to put a positive spin on the firings, saying that they would help establish a “value-based, efficiency-based, and healthier and sustainable growth mode”. At the end of 2021, Tencent had 144,118 employees. It is not clear how many now face the axe.

But it comes as the Shenzhen-based giant contends with organisational missteps, lacklustre growth, and growing competition from rival ByteDance Ltd.

As a major growth engine for the company, a local regulatory crackdown on gaming has been especially worrying for Tencent. To deal with these headwinds, it has sought to cut costs with corporate restructuring and pushed to expand its international revenue streams, though neither of these measures has proven an unqualified success.

Tencent’s game business, which involves many studios and publishers in which it has invested, brought in 174.3 billion RMB in revenue in 2021, nearly one-third of the firm’s total. While three-quarters of that came from China, domestic revenue grew just 1% in the fourth quarter.

A more significant problem was Beijing freezing the issuance of game licenses from August 2021 — effectively suspending the release of new games.

In September, accounts registered as children contributed 0.7% of the total gaming time of Tencent’s domestic games, down from 6.4% the year before. In the fourth quarter, underage accounts only contributed 1.5% to total domestic gaming earnings, a 73% plunge year-on-year.

A source at TiMi Studio Group — a subsidiary of Tencent that runs games including the popular Honor of Kings — claimed that they were actually happy about the restrictions because fewer parents are filing complaints about their kids spending money on games, which used to be a burden on their customer services department.

To get around this, Tencent has been trying to expand its revenue from the international market, with big earners League of Legends and Clash Royale. But while growth was a healthy 34% year-on-year, overseas gaming revenue was just a quarter of total revenue from the segment.

With the stated goal of cutting costs and offering gamers products more targeted to their demands, the tech giant decided to change how it divided responsibilities among its many gaming units. Previously, game studios made games, while game publishers focused on marketing, distribution and so on. Now, studios can take on the functions of publishers, and vice versa.

One company source said instead of making its studios and publishers more efficient, this has done the opposite.

“Tencent has turned itself into both the referee and the player, but such a clumsy structure actually reduced the efficiency of communication,” a source in Tencent’s game division told Caixin.

“It’s the time for Tencent to think about whether it should continue this monopolistic strategy. The upstream and downstream of game business should collaborate and share more resources, instead of stepping on each other’s toes.”

Tencent’s Platform and Content Group (PCG) — which operates products including legacy instant messenger QQ and streaming platform Tencent Video — relies largely on advertising. But as it abandoned original content and started to lose users to rivals, that revenue has declined.

Tencent’s original content is just not appealing to advertisers, a source from the PCG told Caixin. Tencent has not appointed any successor for former QQ.com editor-in-chief Chen Juhong, who was moved to another position in April 2021. The people now leading the unit “don’t understand or care about original content production”, the source said without naming any executive in particular.

Tencent has fallen behind ByteDance in traffic and in winning deals with advertisers. To meet their key performance indicators, departments that were originally responsible for making original content are now churning out “advertorials”, leading to many resignations.

Weishi, the short-video platform that was once Tencent’s challenger for Douyin and Kuaishou, pivoted away from hosting user-uploaded videos last June to become a product for distributing clips of the films and TV licensed by Tencent Video. In December, its monthly active users (MAU) plummeted 62.5% year-on-year to 31 million.

Douyin had nearly 600 million MAU in December, and Kuaishou had more than 450 million, according to consultancy Analysys.

Tencent Video’s saw its MAU slide 8.5% year-on-year to 445 million in December, as it raised membership fees and had to suspend some of its popular TV shows due to official opprobrium, according to information provider Quest Mobile.

In this round of job cuts that started in March, about 10% to 15% of employees of the PCG have been laid off, Caixin has learned.

In 2021, its fintech and business services earned 172.2 billion RMB in revenue, up 34%. In the fourth quarter, this segment overtook gaming to become Tencent’s largest revenue source for the first time. But its gross margin dwindled to just 1.4%.

Lau said that China’s competitive cloud industry has been rapidly expanding, and heavy discounts and custom-made solutions for customers mean margins are paper-thin.

“We are repositioning our focus on revenue growth at all costs,” said Lau, emphasising that once the company’s cloud business has built up enough customer relationships, it can finally start focusing on “healthy growth”.

This will start with trimming unprofitable departments. First on the chopping block are teams that serve the education industry, in the wake of a crackdown on private tutoring. Employees responsible for trading other companies’ hardware are also likely to be laid off, as Tencent wants to focus on its own products.

Measures such as layoffs can cut costs, after initial payouts, but the continued profitability of the cloud computing business will rely on early investment, long-term customer buildup and diversified products, said Charlie Dai, principal analyst of consultancy Forrester.

Challenge from a rival

ByteDance completed its own rounds of layoffs last year. But while the rising rival has already challenged — or bested — Tencent in several content arenas, its attempt to dethrone the social media king isn’t going particularly smoothly.

After restructuring in November, its short video app Douyin now is the name of a business unit that oversees other content platforms such as Xigua Video and news provider Jinri Toutiao. Most of them have more MAU than their Tencent peer products, according to an annual report by Quest Mobile.

As of December, short videos — mostly through Douyin and Kuaishou — sucked up one-fourth of Chinese internet users’ online time...

As of December, short videos — mostly through Douyin and Kuaishou — sucked up one-fourth of Chinese internet users’ online time, figures from the report showed. This massive quantity of attention has increased ByteDance’s ad revenue, which may reach 230 billion RMB in 2021, representing 53% growth, according to industry insiders.

The Beijing-based tech giant has also been building up its game team, following the investment-led approach that worked for Tencent. It poached a number of employees from Tencent Games in 2020 and acquired several top domestic game studios, including Moonton, which is behind big earners Mobile Legends and Magic Rush.

But ByteDance is facing its own challenges as well, especially when it comes to denting WeChat’s social network dominance.

Neither of its two social apps have prospered. Feiliao ceased operations in December. Duoshan has been folded into Douyin.

According to information provider Qimai, Duoshan had less than 1,400 daily downloads on iPhone on average over the past week. Tencent’s WeChat had nearly 146,000.

This article was first published by Caixin Global as "In Depth: As Tencent Lays Off Staff, Is Its ‘Winter’ Approaching?". Caixin Global is one of the most respected sources for macroeconomic, financial and business news and information about China.

Related: Can strict regulations save Chinese youths from gaming addiction? | China's internet giants are shelling out money for 'common prosperity'. But is that enough? | Mobile gaming: The cash cow of China’s mobile phone industry | China’s tutoring crackdown: Is the Chinese government prepared for its consequences? | Banning TikTok and WeChat: Is the US afraid of competition?